As of early 2018, only 21% of bugs found during software testing were fixed immediately, according to Statista. Christian Wiklund, David Eklov, and Niklas Lindstrom believe AI and machine learning could substantially boost this number. Together they founded UnitQ, whose product ingests omni-channel user feedback in any language to identify, quantify, and prioritize product bugs. To launch the service out of beta, the startup this week raised $11 million in series A funding, the bulk of which CEO Wiklund says will go toward new and existing product development.

The seed of the idea for UnitQ germinated at the trio’s previous company, Skout, which the Meet Group acquired in 2016 for an undisclosed sum. Responding to a lack of customer-informed bug prioritization platforms in the market, they developed their own, leaning on their backgrounds in scaling cloud-hosted software and services globally. (Wiklund and Eklov were previously development process analysts at VMWare, and Eklov spent time at Samsung’s R&D center in Austin as a performance architect.)

UnitQ Monitor, the company’s first and currently only product, taps machine learning to pick up on issues customers say they’re encountering with apps — whether that feedback originates from social media, app stores, or customer support emails. It spotlights bugs using a real-time translation tool that translates every customer message into English, complemented by algorithms that analyze the aggregated data. It then sorts the data into custom categories that can be defined and displayed on a real-time dashboard. 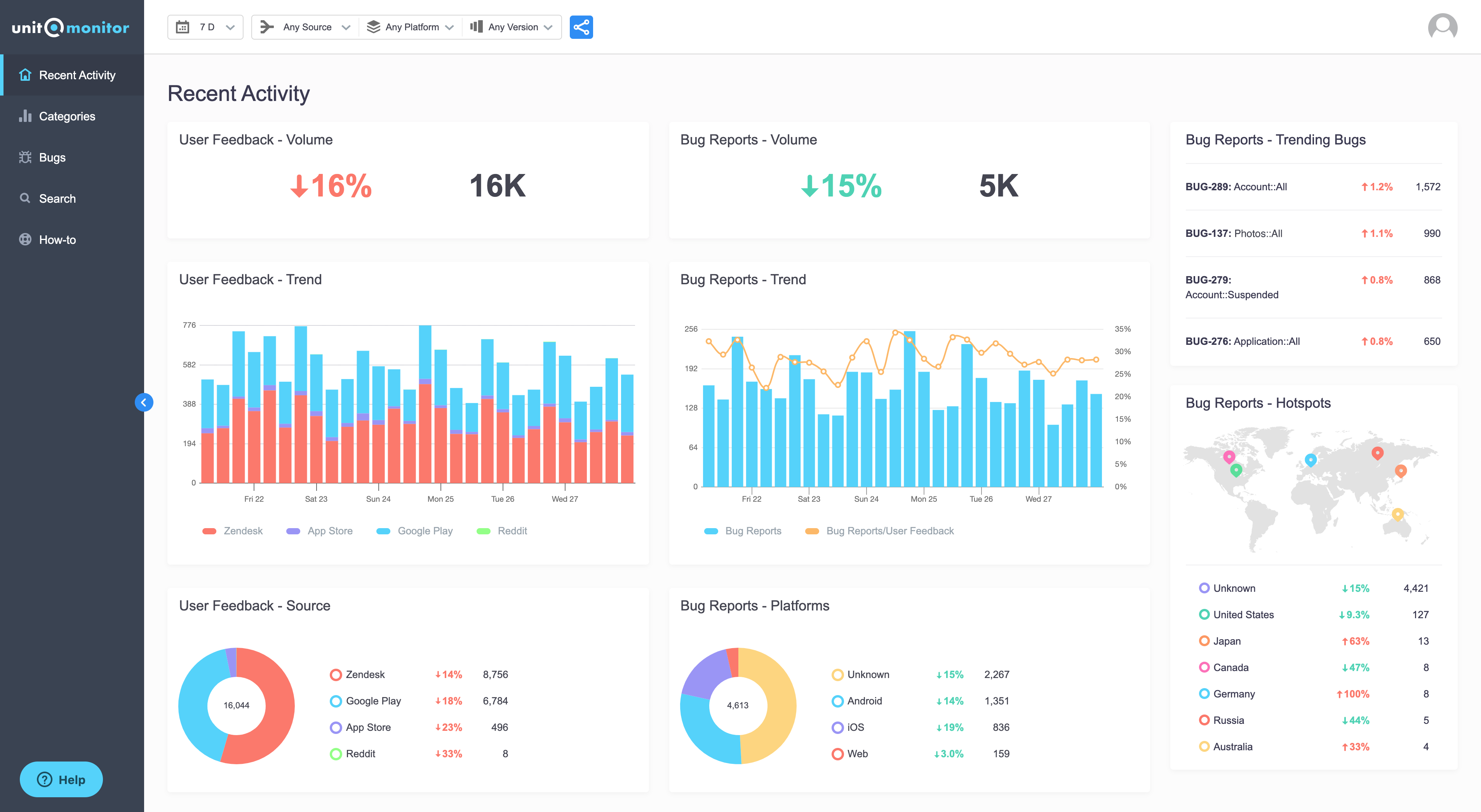 The dashboard shows recent trends (e.g., an uptick in bugs in a particular language, region, or device) as well as open and closed bugs, and it can be configured to forward customer reviews by category, date, or other property to specific teams via Slack and other platforms.

UnitQ asserts that its differentiator is the natural language processing bit — and scale. Its beta customers, which include Pinterest, HTC, Pandora, and the Real Real, identified 3,500 unique bugs in 5.6 million pieces of feedback using UnitQ Monitor with apps reaching “hundreds of millions” of users. Moreover, UniQ claims those early clients saw an average 20% uplift in engagement within a month of adoption.

“When an engineering team develops a product, understanding which bugs to prioritize is one of the hardest challenges,” said Gradient Ventures managing partner Anna Patterson, who plans to join the company’s board of directors. “UnitQ aggregates real-time user data to do this and also ranks bugs by their impact on customer satisfaction and business impact. This is a big leap for product development teams and the tech industry at large because it turns product quality into a science.”

UnitQ, which was founded in 2018, is headquartered in San Mateo and has 10 employees. Its series A round was led by Gradient Ventures (Google’s AI-focused venture fund), with participation from Creandum, XSeed Capital, and Bragiel Brothers.