Home » Reviews » Why Is Everyone Buying Mango Farms In Cyberpunk 2077?

Why Is Everyone Buying Mango Farms In Cyberpunk 2077?

This is, of course, a generic decorative asset used to clutter up the world in Cyberpunk 2077. I'm assuming that whenever an environment artist needed some paper to make an office look untidy, they pulled in this mango farm contract and scattered it around. The problem is, Cyberpunk 2077 is a game that encourages players to take a closer look at its world. There's even a zoom button, which makes weird, heavily reused assets like this actively distracting. Once your brain locks onto them, you can't help but see them everywhere.

It's extra distracting because you can read it. If it was just a few blurry, indistinct lines designed to give the suggestion of text—as most paper props are in video games—I wouldn't give it a second thought. But I find myself stopping, zooming in with my cyber eye, and reading the finer details of the deal. Now I know that the farm is called Katamary Farm, it cost $100,000 (with a deposit of $50,000), and the deal was struck on October 27, 2020. There are also a few spelling errors which makes me doubt whoever drew it up's legal credentials.

I know this is a bizarre thing to fixate on. I'm mostly just taking the piss. But this document is one (admittedly amusing) symptom of a larger issue: the fact that Cyberpunk's massive, sprawling world is decorated with only a very small number of assets. I soon realised that wherever I went, I was seeing the same junk everywhere, recycled ad nauseum. I'm still enjoying the game (the new PS5 version is great), but I stopped believing in Night City as a place a long time ago. It's a flimsy movie set that doesn't hold up to much scrutiny. 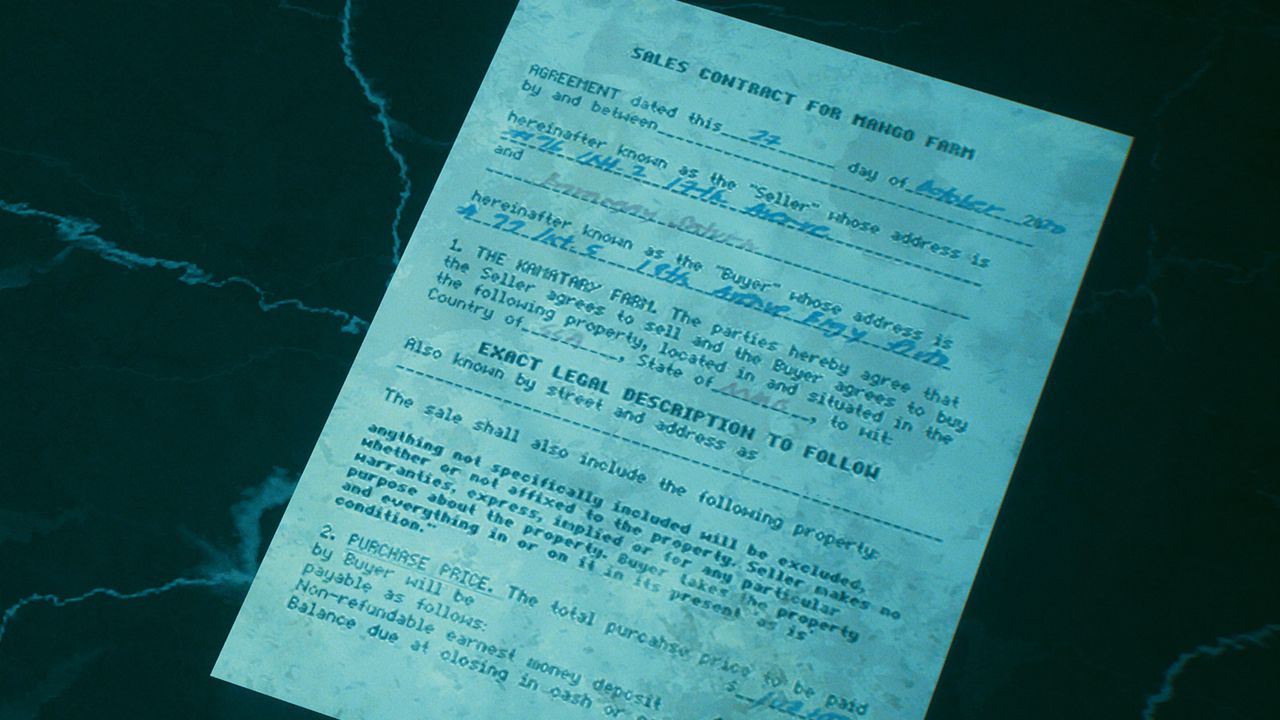 It's no secret that game developers reuse assets. I'm not attacking CDPR for that, and I'm aware of the practicalities of designing these kinds of colossal open worlds. It's just that some games are better at hiding it than others. Cyberpunk 2077 looks stunning from afar and is powerfully atmospheric at times. But when it comes to the granular environmental details, the illusion crumbles. It's a shame, because in other respects there's a lot of attention to detail in the game. The mechanical designs (vehicles, mechs, etc.) are fantastic.

Cyberpunk 2077 isn't the only game that's bad at hiding asset reuse. I spotted the same row of books in Resident Evil 7, Resident Evil 2 Remake, and Resident Evil 3 Remake, purely because they had such weird titles, like UNNERVING COMBAT, FIGHTING STREET, and THEY KILLED HIM. In System Rift, a Deus Ex: Mankind Divided DLC expansion, I noticed a big stone water fountain from the main game had been recycled and dramatically scaled down, only because the previously normal-sized graffiti sprayed on it was now comically tiny.

Some people are going to read this and think I'm a tedious nitpicker. Just enjoy the game, idiot. Who cares what's printed on some random piece of paper on a desk? Get a life, mate. But CDPR made a big deal of what a detailed, convincing setting Night City would be. It said the first-person view was implemented to give players a closer, more intimate look at the world compared to The Witcher 3. It even gave me a cybernetic eye with multiple levels of zoom. So if I'm constantly being distracted by mango farm contracts, it's not my fault.