These Pokemon Unite Leaks Are Confusing The Hell Out Of Me

Pokemon Unite is horrible at keeping secrets. Almost every one of the nine post-launch fighters were leaked by data miners and various social media accounts prior to their official announcement. The newest fighter, Dragonite, was added on December 20, but discovered by leakers on Discord all the way back on November 19. The newest round of leaks, which teases the next three Unite licenses, actually started as a post on one of Unite’s official social media pages. As the leak has gotten more credibility over the last month, I’ve only gotten more confused. Supposedly, Gallade, Blaziken, and Wobbuffet are coming soon. Suffice to say, I have a lot of questions about these choices.

The leak comes from the official Pokemon Unite Philippines Facebook page. Back in August, the page posted an image of six Pokemon and asked followers to react to the one they would choose. The image includes Wobbuffet, Blaziken, Dragonite, Decidueye, Gallade, and Tsareena. Since then, three of those Pokemon – Dragonite, Decidueye, and Tsareena – have been added to the game. Now, rumors are spreading that Blaziken is joining the roster next. If that turns out to be true, it probably won’t be long until Wobbuffet and Gallade follow.

Blaziken is definitely the most intriguing option between the three. Blaziken would be the first Gen 3 starter in the game – a generation that is currently grossly underrepresented, with only Absol and Gardevoir on the roster. With Tsareena and Dragonite both filling out the All-Rounder category, it seems likely that Blaziken will either be an Attacker or a Speedster. The Speedster class is in need of an overhaul currently as they’ve been made largely irrelevant by All-Rounders, so perhaps Blaziken could be coming to breathe some life into Speedsters. Alternatively, there are three Attackers that deal attack damage and four that deal special attack damage, so Blaziken could be an attack stat Attacker that evens out the roster. It would make sense considering Charizard, Cinderace and Talonflame use the attack stat, so Blaziken – who is also a fire-type – would likely be the same. 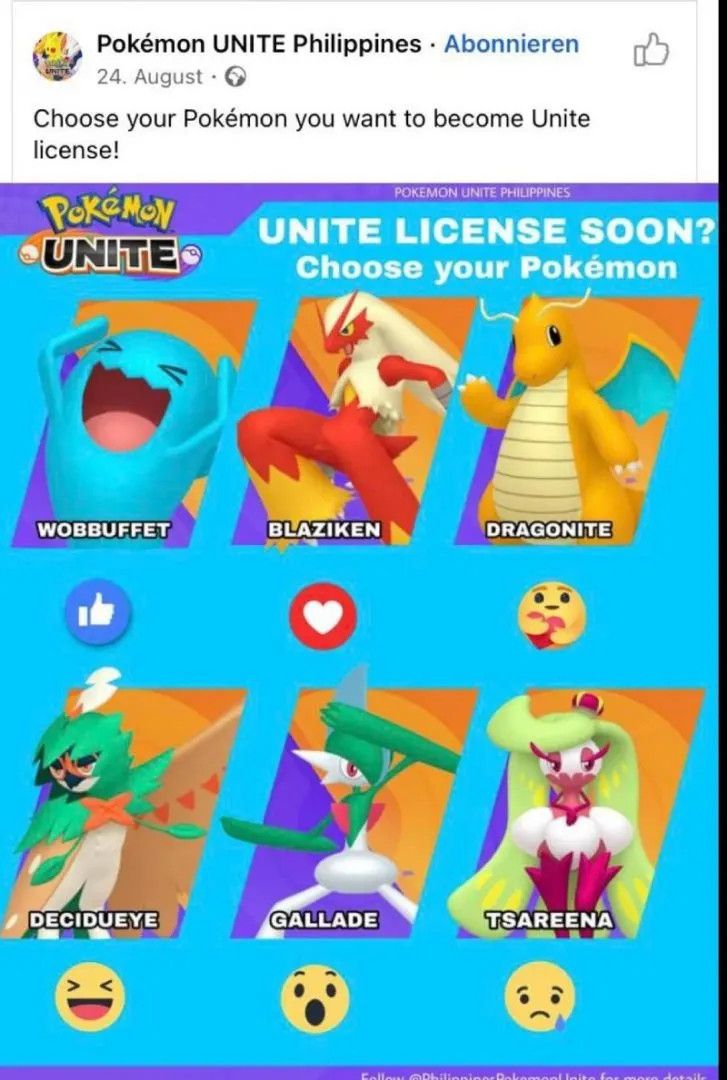 While I think we have too many fire-types already, Blaziken still seems like a good fit for Unite. Gallade and Wobbuffet, on the other hand, have completely thrown me for a loop. My question for Gallade is, how? My question for Wobbuffet is, why?

Both Gardevoir and Gallade evolve from Kirlia, and Gardevoir is already in the game. If Gallade gets a Unite license too, does that mean you can have two Ralts on the same team? Alternatively, perhaps you will be able to choose whether you want to evolve into Gardevoir or Gallade at level nine. Kirlia learns either Psyshock or Future Sight at level five, then Psychic or Moonblast at level seven. Unless they rearrange its entire progression path so that it evolves twice before it learns any moves, Gardevoir and Gallade would have the same exact abilities, so what would be the point?

It seems like they’d need to be two completely separate Pokemon, but this poses some problems of its own. When I see an enemy Ralts at the start of the game, how will I know if I’m fighting a Gardevoir or a Gallade? As much as I want this rumor to be true because it gives me hope that Umbreon can still join the game after Sylveon, I just don’t see how this could work.

And then there’s Wobbuffet, a Pokemon who has been the butt of the joke for almost 20 years. Wobbuffet is the most useless member of Team Rocket, and that’s really saying something. It also seems strange that we’d get a third psychic-type when we still only have one dark and one dragon-type. If Wobbuffet really is coming in 2022, I have a hard time believe anyone is going to be jumping at the chance to buy it.

As much as I love Tsareena and Dragonite, these all seem like terrible choices for Pokemon Unite. Everyone has their favorites, but I’d much rather see Scizor, Tyrantitar, Feraligatr, Houndoom, or Donphan in the game. Gen 2 definitely needs more representation, but Wobbaffet ain’t it.