The Witcher 3 Has An Awesome Monty Python Easter Egg

CD Projekt Red sure loves their Easter eggs. If you’ve played through The Witcher 3: Wild Hunt, then you’ve probably stumbled across references to famous fairy tales, folklore, and other forms of popular culture scattered throughout the game’s massive world.

Easter eggs related to period-appropriate stories like Goldilocks & The Three Bears or Robin Hood make sense considering the era. However, it’s a bit surprising to learn that a reference to a classic, wacky British comedy is stashed away in The Witcher 3. That’s right, there’s a pretty amazing nod to Monty Python & The Holy Grail that you can find while you’re procrastinating instead of searching for Ciri.

Look At The Bones!

There’s a side quest you can undertake called The Truth Is In The Stars. You can start this task by looking at Oxenfurt’s notice board or by heading to the small town of Benek. The quest involves a soothsayer who offers to tell Geralt of a vision he had in exchange for some dragonroot. To find that, you need to head southeast of Benek towards a hidden cave.

Which is exactly where you’ll find this gruesome yet familiar scene: 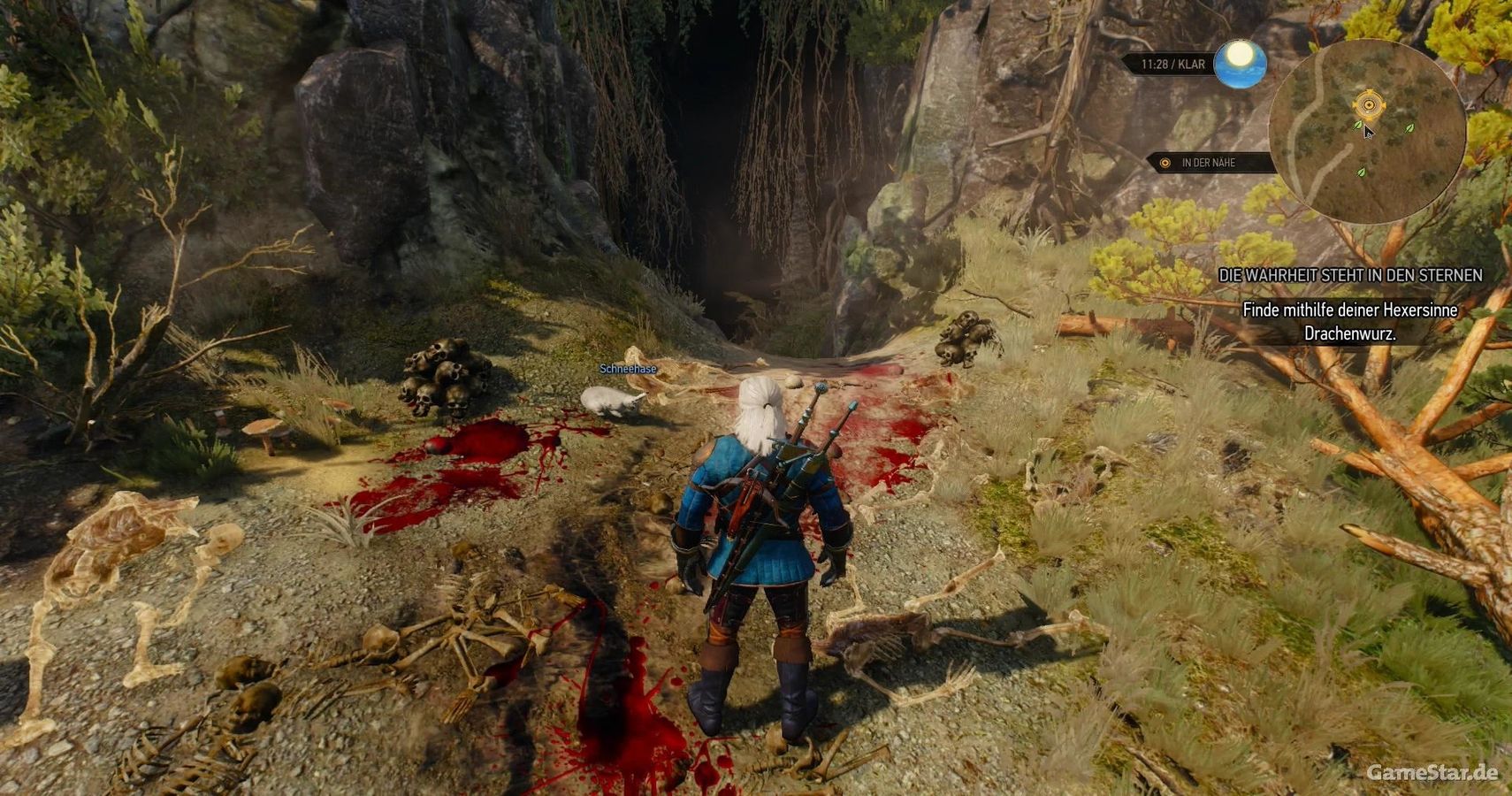 Yes, that’s a reference to the Killer Rabbit of Caerbannog from Monty Python & The Holy Grail. If you somehow haven’t seen that film (we don’t care if it came out in 1975 you should still watch it ya dang kids!) this bunny was a fearsome beast that ripped men apart limb from limb. The only way to defeat it was with the Holy Hand Grenade Of Antioch.

Thankfully, this particular rabbit is merely a snow hare that doesn’t pose much of a threat to a witcher. The blood and gore surrounding it is likely due to nearby ghouls. However, it does have a perplexing invulnerability from most of Geralt’s attacks. Your sword, arrows or magical signs will have absolutely no effect on this buff bunny. Much like the Killer Rabbit of Caerbannog, the only way to stop this furry menace is with a bomb. Chucking an explosive at the hare will end its reign of terror once and all.

It’s obvious from this gem of an Easter Egg that the developers over at CD Projekt Red have a great fondness for Monty Python’s brand of absurdist humor. It’s not even the only reference to the group in The Witcher 3. Thieves can sometimes be heard shouting the famous Holy Grail quote “Your mother was a hamster and your father smelled of elderberries!” There’s also a side quest called Shock Therapy that many believe to be a nod towards a scene in The Life Of Brian.

The Witcher 3: Wild Hunt is full of great jokes and Easter Eggs, which makes us wonder exactly what kinds of incredible references we’re going to get when Cyberpunk 2077 releases this September.