Skyrim’s Survival Mode Is Great If You Love Misery

Since Skyrim's recent Anniversary Edition update, Survival Mode was made free on all platforms. Previously it cost 500 credits from the Creation Club, a storefront for Bethesda-sanctioned mods. But now you can add it to the game gratis, and it's worth doing at least once. It makes Skyrim itself as much of a threat as the monsters who roam its frosty plains. You now have to manage extreme temperatures, hunger, and fatigue, which adds an extra layer of challenge to cross-country journeys that were once trivial.

It's a surprisingly deep mod, adding limitations to the game that completely change its feel and flow. Fast travel is disabled, forcing you to walk or ride between locations. You can still take carriages and boats, but you may arrive at your destination tired, hungry, or worse. There's no health regeneration, which means you can only restore it with potions, food, or magic. You have significantly reduced carry weight, which arrows now contribute to. You can only level up by resting. Even bonuses gained from standing stones are reduced.

If you've been playing vanilla Skyrim for years, it's a shock to the system. Old habits you've relied on for years are rendered ineffective or just plain useless. Embarking on a long journey is now something you have to plan for. Do you have enough food? Are you well rested? Do you have any diseases or afflictions that might make the trip difficult or even impossible? In a role-playing sense, it's magnificent. Suddenly, Skyrim feels like a dangerous, formidable, almost real place—not just a pretty, snowy playground for you to go adventuring in. 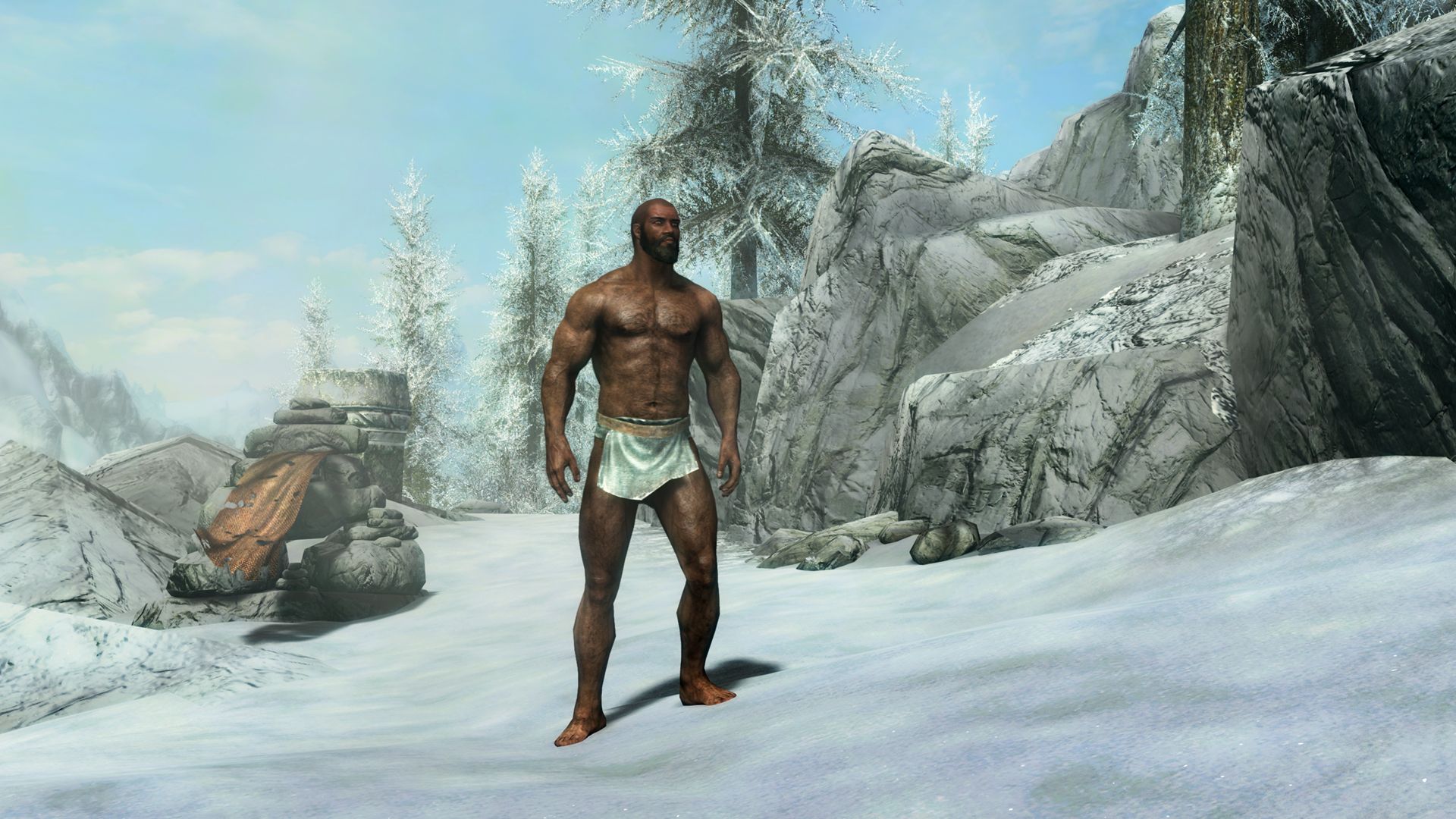 To get an idea of how Survival Mode works, I decide to stress test it by creating an extreme situation. I travel (and I mean really travel, because I can't fast travel) to the town of Ivarstead, which rests at the foot of Tamriel's highest mountain, the Throat of the World. I strip down to my underpants, for science, and begin the long trek to the snow-whipped summit. It's fine at first. The forests around Ivarstead are lovely and temperate, and a sun icon appears on the HUD letting me know that I'm warm—even with my kit off.

It doesn't last. As I ascend, the air gets colder and I'm stricken by a negative affliction simply called Chilly. This reduces my total health and makes me move 10 percent slower. Survival Mode adds a warmth stat to all the armour and clothing in the game. The more you layer up, the longer it'll take for you to get cold. But since I'm naked, it sets in right away. Your race can also come into play here. Cold-blooded Argonians become cold 25 percent faster, while hardy Nords used to the frigid climate are afflicted 25 percent slower.

Then, to make matters worse, I contract my first disease. A wolf bites me and I'm stricken with Rockjoint, which stiffens up my arm and makes my melee attacks 25 percent less effective. This disease was in the base game, but Survival Mode adds a more severe Crippling variant that makes me 75 percent worse at swinging a sword. Luckily there are a number of ways to cure a disease, including praying at a shrine to one of Skyrim's many gods or drinking a Cure Disease potion. It's a good idea to carry a few of these with you in Survival Mode. 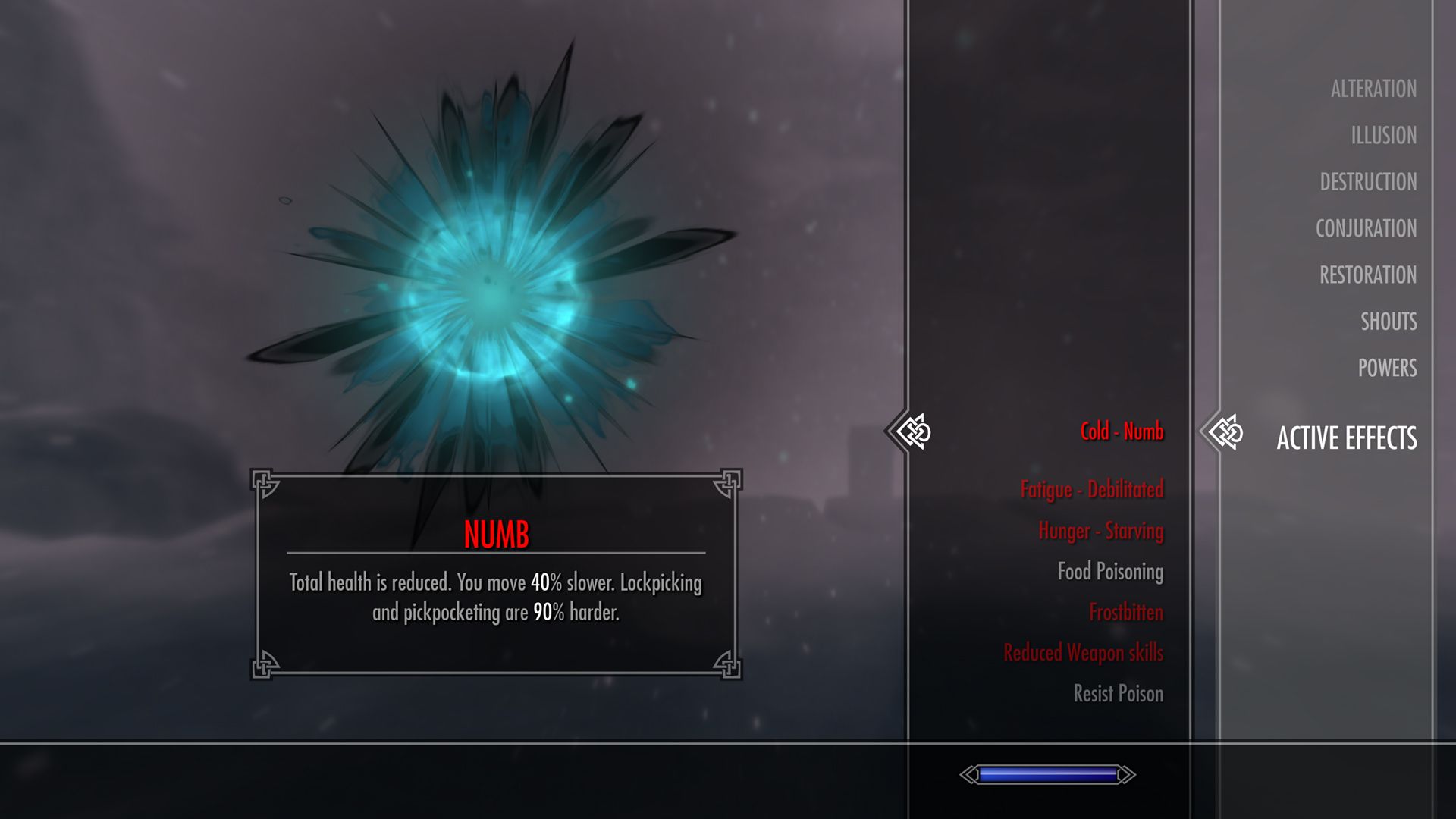 I continue up the mountain and notice that my Chilly status has changed to Freezing. My health dips even lower and my movement speed decreases by a further 30 percent. I also get a bonus affliction (lucky me) called Frostbitten, which makes bows do 30 percent less damage—presumably because of my numb, shivering hands. Then my stomach starts rumbling. I haven't eaten for 24 hours, so I open up my inventory to see what I have to eat. All I have is a single raw rabbit leg from a fearsome bunny I bravely slaughtered earlier.

I eat it without thinking and get another affliction for my troubles: Food Poisoning. This makes my magicka and stamina recover 50 percent slower, and worse yet, eating food won't restore any health for three in-game days. Argonians and Khajiit are immune to this affliction, but I'm a Redguard. I'm barely halfway to the summit and my guy is already a mess. He's starving, freezing, poisoned, and suffering from a bad case of Rockjoint. My health, magicka, and stamina bars have all been reduced massively and I can barely swing a sword.

Okay, so I'm using the Wait menu to move time forward and increase the severity of these maladies. This is an experiment, remember. When you're playing the game normally, keeping on top of your health is much easier. You just have to make sure you rest regularly, keep your inventory stocked with food, have plenty of potions to hand, and wear climate-appropriate clothing. It's a lot of management, and turns even the simplest journeys into a bothersome chore. But that's the entire point of the mod. It's supposed to be miserable. 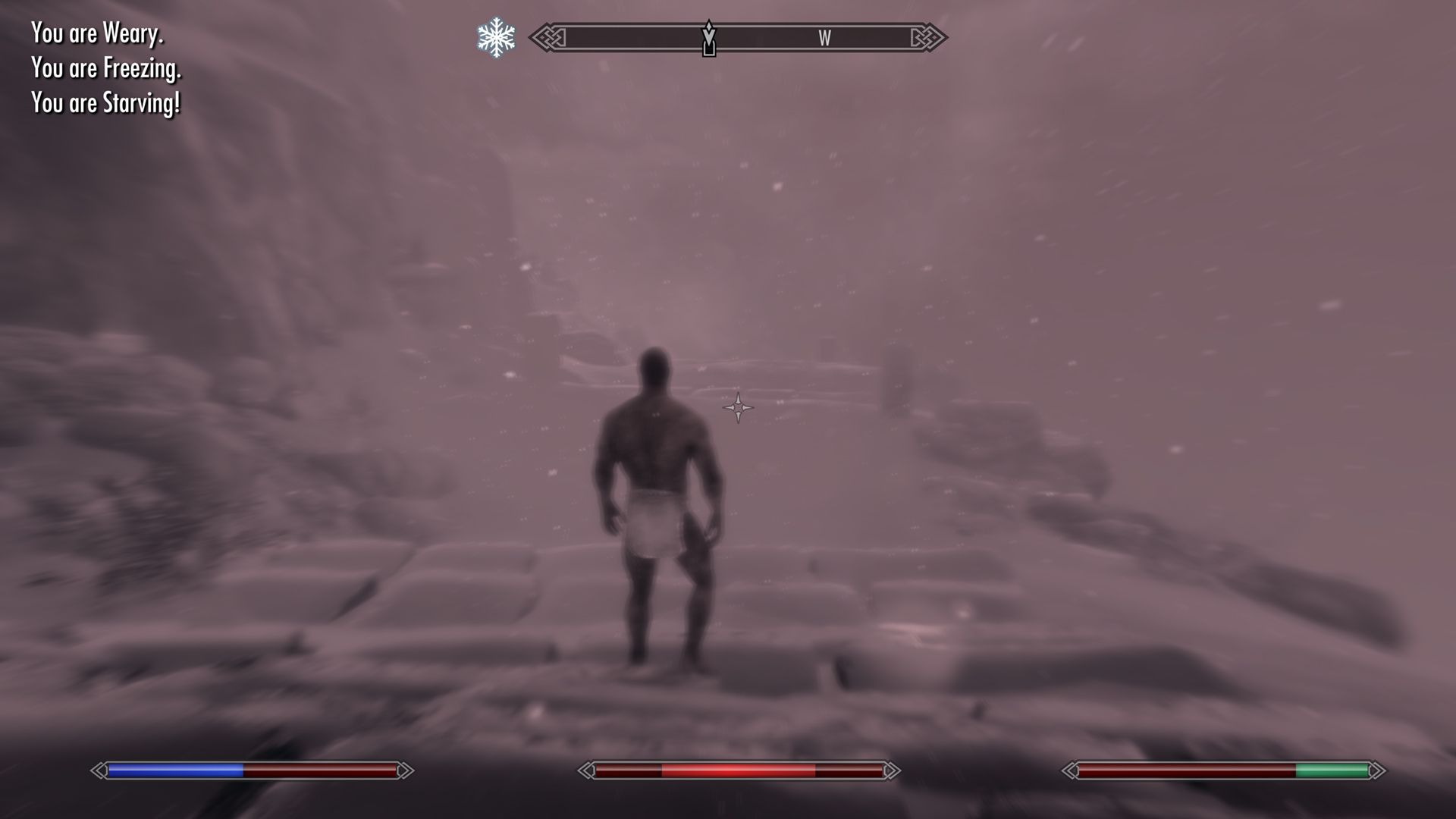 By the time I reach the peak of the Throat of the World, I'm basically dead. All of my afflictions have reached their deadliest stage. I've gone from Chilly to Numb, the coldest you can get, which has seriously lowered my health bar and is making me move at a snail's pace. I can't defend myself and I'm ridden with disease. There are no beds nearby to sleep it off, no food to fill my belly, and no potions to cure me, so I decide to just throw myself off the mountain and delete my save for good measure. Let's pretend this never happened.

Survival Mode is utterly miserable, but I kinda love it. It almost makes Skyrim feel like a whole new game, which is an unexpected thing to say about a ten-year-old game that I've played for hundreds upon hundreds of hours. I doubt I'd ever enable it during regular quests, though. Imagine being deep in a dungeon, fighting off waves of draugur, when your stomach starts crying out for a veal stew, or your Rockjoint flares up. Some people will probably love the idea of that, but I have a limit to how much simulated misery I can stomach.