Legendary game developer Fumito Ueda, director of Ico, Shadow of the Colossus, and The Last Guardian, rarely lets his games get sentimental.

That doesn’t sound right, does it? The games of GenDesign (formerly known as Team Ico) live in our emotional memories. When I think of Ico, it’s the powerful bond between the two main characters that springs to mind first. More than any single detail about Shadow of the Colossus, I remember what it felt like to soak myself in the story’s themes of mourning.

But the games themselves don’t often address these themes directly. The few lines of dialogue in Colossus never acknowledge the feelings behind the characters’ motivations. While the two children spend hours together in Ico, not once do they share a joke or even smile.

Ueda’s third game, The Last Guardian, is largely the same. The game is built around your relationship with Trico, your enormous dog-cat-bird companion, but it never tells you to fall in love with your feathered friend.

Your relationship is made of organic little moments, mutual trust built through quick animations and diegetic interactions. You’re never told that the two of you are close; you are given the opportunity to grow close by playing. The emotional change happens in the player’s heart — the game itself trusts you to get there.

But just before its climax, The Last Guardian provides a unique moment in Ueda’s ouvre: It lets itself, just for a minute, get sentimental. And that minute is one of my favorites in modern gaming.

This essay on The Last Guardian was written as a companion piece to the video above, also created by Jacob Geller.

I don’t fault anyone for not reaching the conclusion of The Last Guardian. Unlike most games, which put the power to succeed or fail directly in the player’s control, The Last Guardian instead asks you to indirectly control another creature: a big, clumsy, stubborn beast named Trico.

The experience would be a breeze if Trico could be controlled directly. It would turn the game into a power fantasy — you, a strong and agile creature, bounding around ancient ruins. Instead, the game puts you in the shoes of a small boy and asks you to train this temperamental creature. You’re not powerless, but you’re certainly not in control.

Trico, accordingly, is as eager and distracted as a puppy going through an obedience class. Simply repeating instructions is rarely effective; you have to learn the best ways to work with Trico to make it through the game’s many obstacles.

It’s this delicate balance of encouragement on your part and behavior on Trico’s that makes the animal feel so alive. You have to learn how to accommodate this beast with a mind and heart of its own, and it has to learn to accommodate you. Much like the frustrations and rewards of training a real animal, the story of The Last Guardian is one of mutual taming.

The controls of the game reflect this: You’re always able to shout commands at Trico, but the beast’s responsiveness varies over the course of the game. At first, it barely listens to you at all. By the middle of the story, you can rely on Trico to figure out what you’re asking fairly quickly. In the final few hours, though, Trico rarely even needs to be instructed. Your bond has moved beyond words. It’s not that you’ve tamed Trico into submission; instead, you simply understand each other’s needs.

In trademark Ueda fashion, nothing in the game directly tells you this. There isn’t a cutscene where Trico makes googly eyes at you and you say “I love you” back. As a matter of fact, the last few hours of the game barely give you time to breathe, let alone express your affection for each other. Set-piece after set-piece rockets you toward the finish, including the biggest battles and the scariest jumps. In these final few hours, you hardly get a chance to appreciate how strong your bond with Trico has become. But then, just as you summit the massive tower in the middle of the world, right before the climax —

Nothing happens. For almost a minute.

I think about this minute a lot. On an aesthetic level, it’s almost unsurpassed; the wind rustles through every one of Trico’s thousands of feathers, the white marble glows orange in the fading light, the setting sun burns a line across the horizon. Details fade into silhouettes on top of the tower, and there’s no music to distract you from whatever you’re feeling. The grandeur of this moment is staggering, especially for a game that has largely avoided dramatic lighting.

But there are plenty of video games that have beautiful sunsets. What elevates this moment above its visual appeal is that it lets you just be with Trico. For almost a minute, there’s nothing else that needs to be accomplished. You can stop and scratch Trico’s ears, or tickle its belly, or just lie down with your friend in the wind and the fading light. For a minute, you can just be a boy with his friend. So many games tell you how to feel. So few give you the time and tools necessary for those emotions to occur organically. 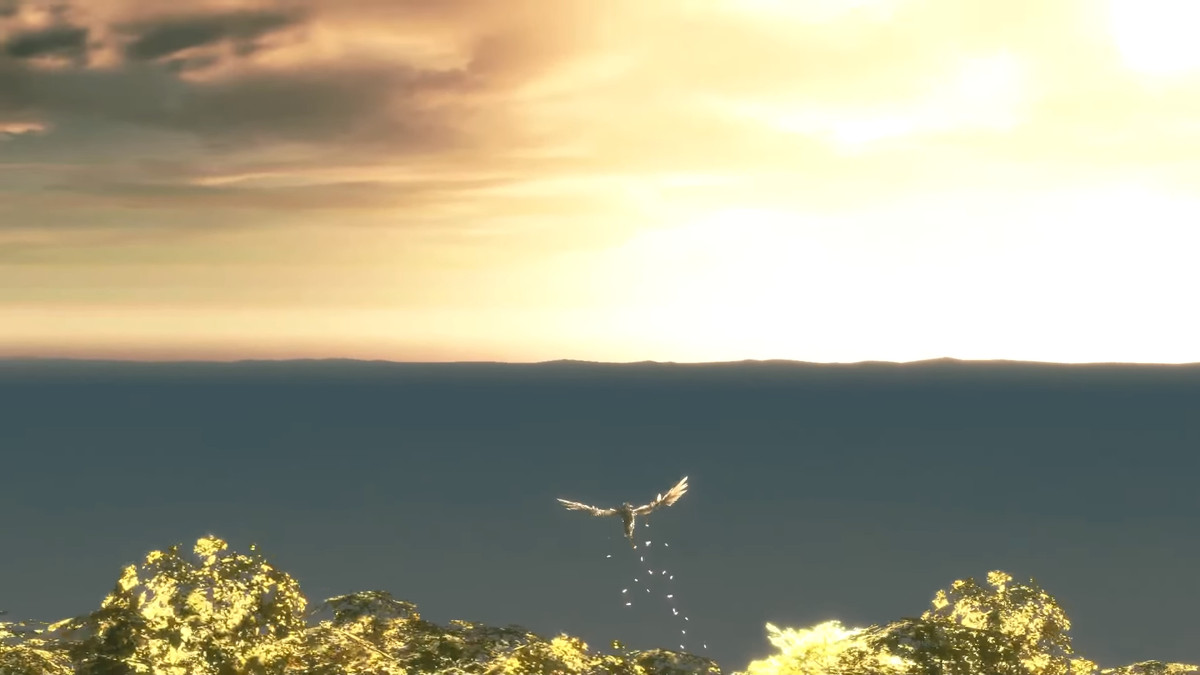 Long before The Last Guardian came out, the internet was already prepared for the predicted heartbreak of the game. In 2009, seven years before the game’s release, Penny Arcade joked that there were only two ways the game could end: “The Boy Dies” … or “The Baby Gryphon Dies.”

While the game’s true ending isn’t quite that predictable, the larger hunch was right. This isn’t the kind of story where Trico and the boy can live happily ever after. Their worlds are just too different.

So even on my first playthrough, when I reached the top of the tower, I understood the finality of this minute. Nothing in the game tells you this; there’s no warning message about a point of no return.

But for Fumito Ueda, whose previous games ripped away our companions without so much as a goodbye, this minute is incredibly sentimental. It’s a recognition by the game that the bond between you and Trico is the single most important part of the whole experience. As such, the kindest thing The Last Guardian can give us is just time to indulge that bond. It didn’t have to tell us, or even ask us, to say goodbye. We knew what we were doing.

There’s no lack of spectacle in The Last Guardian. Lightning flashes, monsters fight, towers crumble. But even now, multiple playthroughs and dozens of hours later, I know which part I’m looking forward to the most. If I close my eyes, I can see it: a boy and his beast, shadowed under a fiery sky, able to comfort each other one last time.