Persona 5’s Metaverse is the unconscious mind made manifest, whether that refers to the individual psyches of the corrupt or the collective apathy of the masses. For the most part, the games combine tarot card readings with Jungian archetypes in order to describe each character’s philosophical and psychoanalytical identity – Igor is the Fool in Persona 5, Yusuke is the Emperor, Makoto is the Priestess, and so on. Conversely, enemies are described in more biblical terms, which says a lot about secular vs religious cognition, likely due to the fact that demagogues often see themselves as modern materializations of the divine. It comes as no surprise, for example, that Rivers in the Desert is the name of the song that plays in the boss fights against Masayoshi Shido and Yaldabaoth. “Deserts possess a particular magic, since they have exhausted their own futures and are thus free of time,” JG Ballard writes in his essay, The Atrocity Exhibition. “It’s no coincidence that religious leaders emerge from the desert … A future Rimbaud, Van Gogh, or Adolf Hitler will emerge from their timeless wastes.”

While this theoretical framework is remarkably sturdy, it’s worth noting that Persona 4’s TV World – or Midnight Channel, as it’s also known – is constructed on much firmer foundations than the Metaverse, which is paradoxically thanks to how fleeting and impermanent it is. Essentially, it is much stronger precisely because it is emphatically less stable, at least in terms of conceptual consistency. This isn’t just in terms of how the TV World is structured, nor does it have much to do with actually being there – it’s mostly tied to the beginning of the game, the identity of the protagonist, and the overarching thematic backbone of the story.

Persona 4 Golden’s opening sequence is exceptional. On one hand, it seems like a short animated cutscene depicting a mundane train journey. On the other, it is directed with such conscious attention to detail that it’s impossible to remove it from the context of the narrative it is designed to introduce.

Yu Narukami – which is the canonical name for the protagonist of Persona 4 – is a young cityslicker forced to move to rural Inaba to live with his uncle, Ryotaro Dojima. While the game technically begins with Igor welcoming you to the Velvet Room, the scene I’m talking about here is the one with Yu on the train – specifically the part where you go through the tunnel and realize the role you have to play in the events to come. 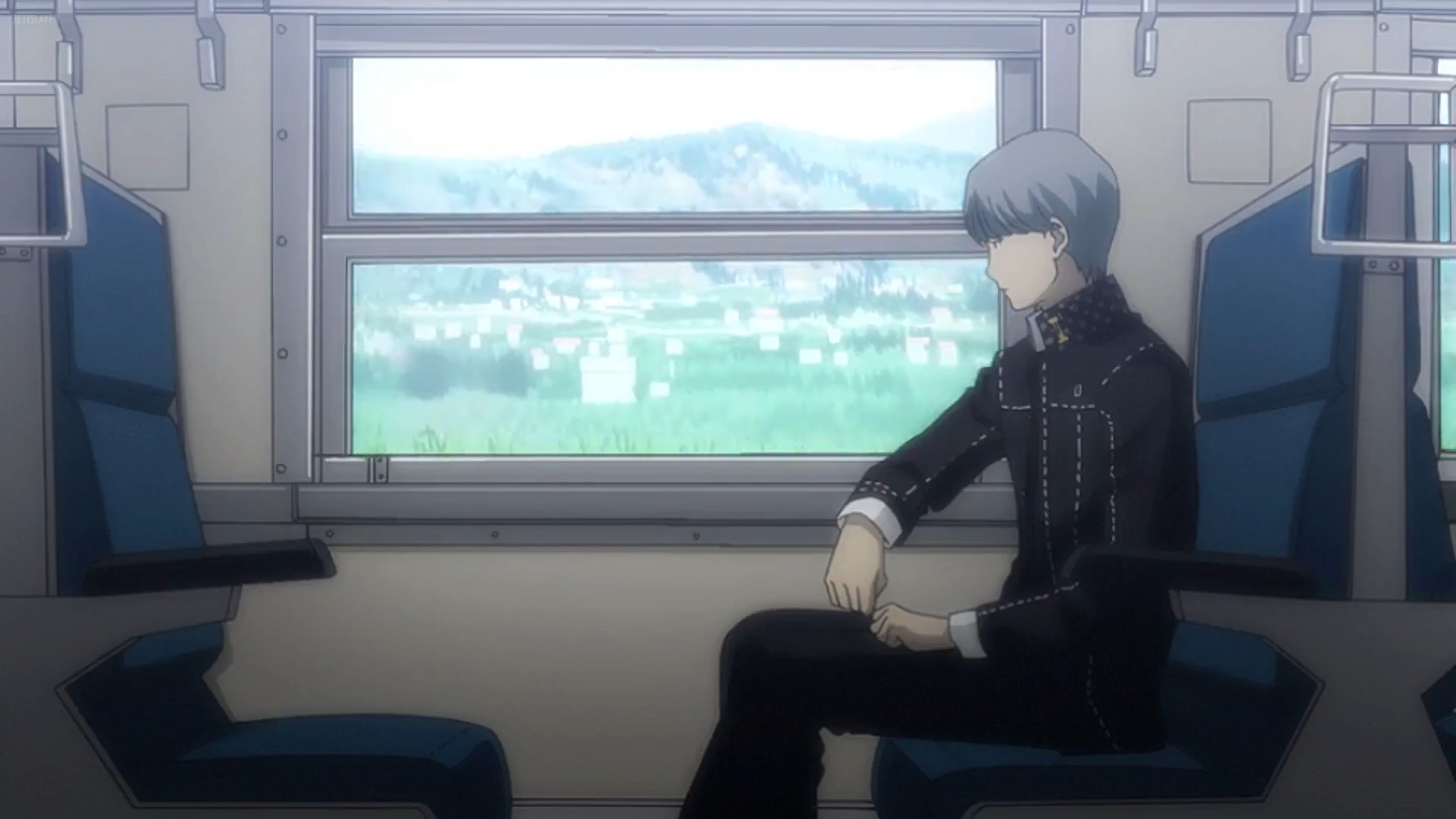 I’ve always thought mirror scenes are fascinating when done well. There’s one in The Last of Us Part 2 where Ellie walks past a dirty and blurred reflective surface and the angle makes her hair look like Abby’s. Because the opacity of the surface makes her facial features indistinct, it looks as if both characters are on screen together, separated in equal parts by an object designed to offer a perfect representation of what stands in front of it. This kind of abstract mirroring is commonly used in film and television, although one of my favourite instances of it happens right at the start of Persona 4, purely because of how heavily it leans into liminality.

Liminal spaces are the places in between, makeshift passages designed to be temporary – a car park, an airport, or, in this case, a train. They are neither the origin nor the destination of a journey, and they are simultaneously empowering and draining based on how you approach them. While the train itself in Persona 4 exists in a liminal state, the true liminal space in this scene is the tunnel, which the art direction recognizes and absolutely capitalizes on.

Before entering the tunnel, there is little to no reflection in the glass – instead, the suburbs can be seen out the window. As Yu continues on his journey, reading a text from his uncle and probably pondering the year to come, the train pulls into the tunnel and the scene through the window changes drastically. Now that it’s dark, his reflection is clear, but the mirror image is cut short – a beam passes through where his eye should be, leaving the real Yu full-faced but his mirrored image without eyes. It’s at this point that images of Igor and Margaret surge through his mind, causing him to jolt upright and open both sets of eyes – real and reflected, conscious and unconscious. Once this happens, the train passes through the other end of the tunnel and out into the rural meadows of Inaba – more than one change has occurred. 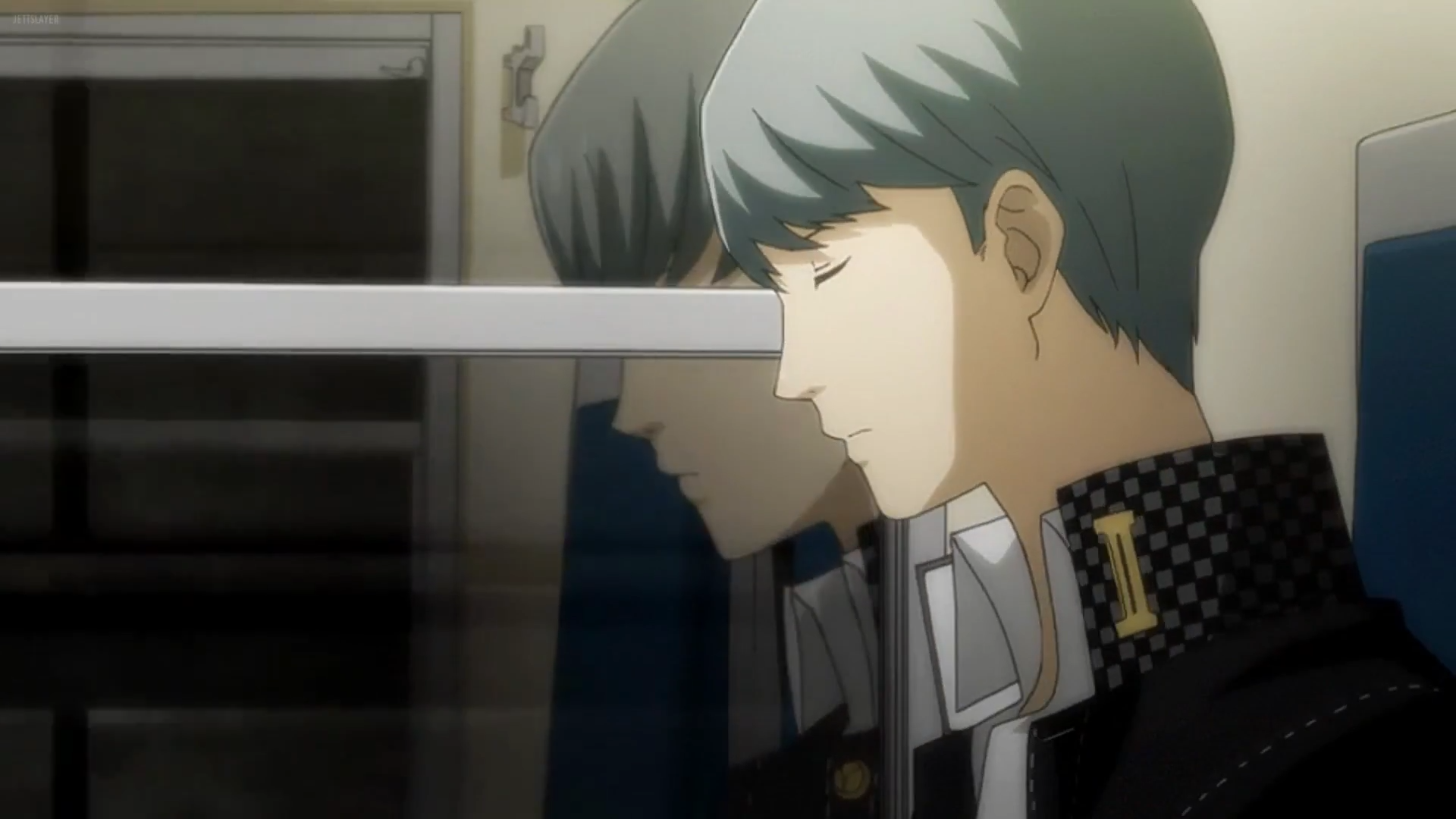 I mentioned earlier that liminal spaces can be either empowering or draining. This is because the specific magic imbued in these weird states of existence is rooted in metamorphosis. The impermanence of liminal spaces is what ultimately allows us to derive some sort of change from them, regardless of whether said change is sufficiently minor to be completely inconspicuous or if a much larger adjustment comes to pass. In the case of Persona 4 Golden, these 20 seconds or so – a train that enters a tunnel and leaves it – tell us everything we need to know about Yu’s initial involvement in the world, as well as how the TV World’s atmosphere pervades our own. By the end of the journey the landscape has ostensibly changed, but that liminal middle sees a difference in Yu, too. It goes beyond basic apperception – the idea that you can view yourself as an object or thing from a perspective outside of yourself – and verges on the exact kind of abstract cognition that Persona’s world is based on. I ultimately prefer Persona 5 to Persona 4, but it doesn’t have a single scene that is as capable of articulating its thematic or conceptual genesis as clearly as this one. 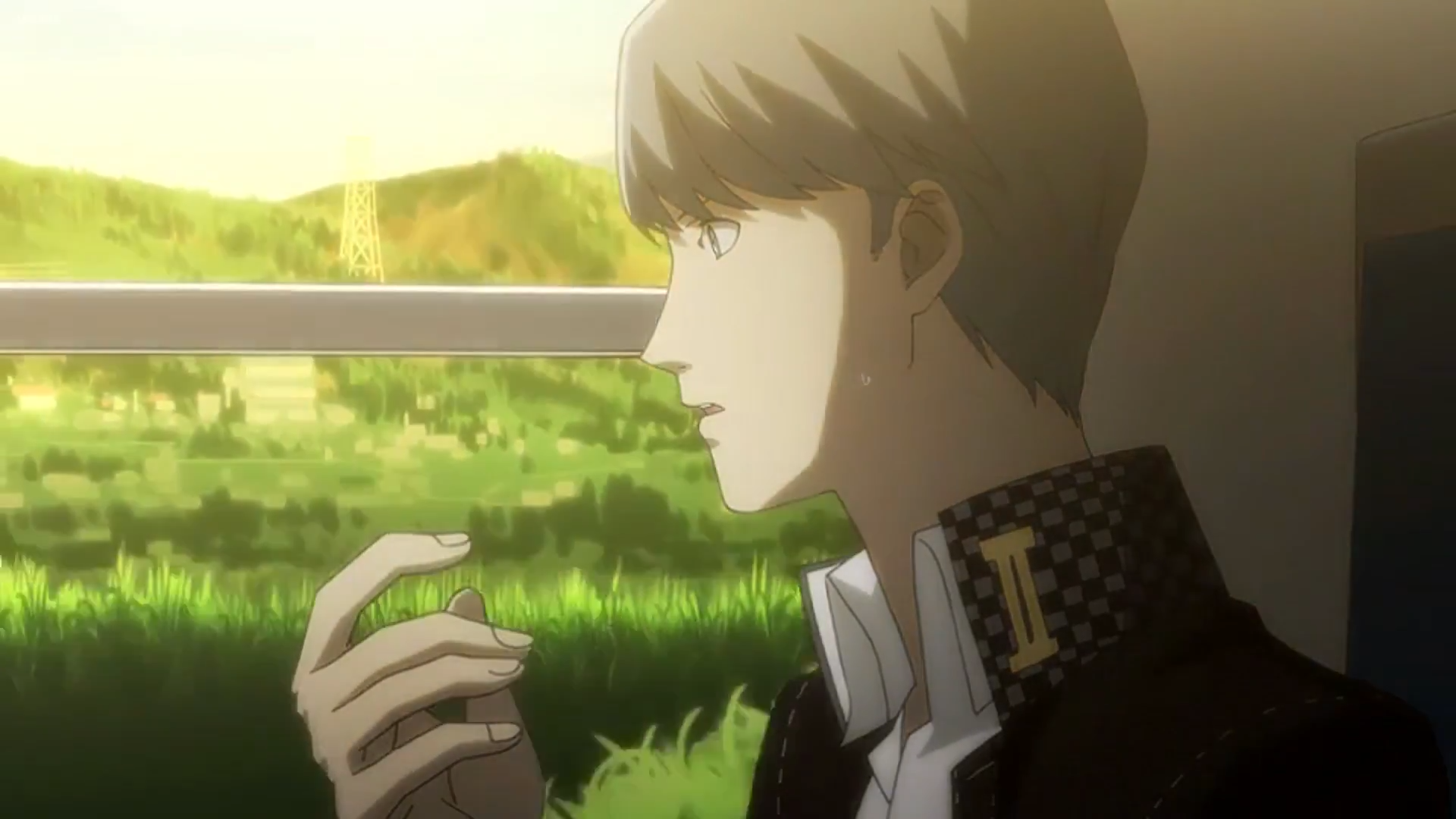 And this momentum is maintained. After teeing it up, Persona 4 continues to exploit liminality for narrative credibility. The first place you go to after meeting Dojima and Nanako at the train station is a gas station, arguably even more liminal and inherently weird beneath its ostensible mundanity. That’s not to mention the fact that the entire story revolves around tangible fog passing through an intangible barrier that is strictly metaphysical – it’s Yu’s natural affinity for liminality that allows him to follow suit. Sure, Joker’s status as the trickster is what permits him access to the Metaverse, and his capabilities are definitely based on a similar gravitation towards liminal space, but it’s the fact that Yu remains so ambiguous and so liminally charged in and of himself that makes the Persona 4 TV World so concrete, purely because said concrete is actually malleable. That’s a paradox, but it’s impossible to discuss this kind of structure in any other way. All kinds of artists have attempted to articulate it by leaning into the dissonance that is at the heart of this synthesis. For example, “How we choose the framing of the scene / Hate begins to spill across the screen / Blinding light illuminates the scene / Trying to fill the spaces in between” from How To Destroy Angels’ The Space In Between feels particularly apt here, while Radiohead’s Pyramid Song was used to great liminal effect in Cyberpunk 2077’s Judy Alvarez arc.

Again, I like Persona 5 more than Persona 4, but it’s a fact that Persona 4 understands its reliance on the TV World better than Persona 5 recognizes its dependence on the Metaverse. It’s abstract and discussing it sounds pretentious as shit, but the reason it gets away with teddy bears conjuring dimension-shifting tellies out of thin air is because it is, at least in principle, remarkably sound.