If you’ve been playing Genshin Impact over the last couple of months, you’ll probably already have formed your own impression of Paimon, the polarizing fairy companion who assists you on your adventures across Teyvat. Love her or hate her, she’s clearly a significant character in the grand narrative the game is setting up – if you look a little bit closer, it actually seems as if she’s going to be the final boss. Kind of.

I’ve seen a few discussions pertaining to why this might be the case, the most prevalent of which have to do with the fact that Paimon is the name of a mythological demon king. That’s an interesting observation, although it’s worth noting that Venti – also known as Barbatos – is named after a demon as well. On top of that, being a demon doesn’t make you inherently bad – just look at Persona 5, where you enlist demons to attack and dethrone God.

There’s also the fact that Paimon’s in-game abilities match the powers that her demonic counterpart from mythology is supposed to possess. She has knowledge of Teyvat’s past despite the fact she only comes into contact with it when she encounters you. Flight is another power shared between both Paimons, as is the ability to survive underwater – remember, you meet Paimon after you fish her out of a lake at the beginning of the game. 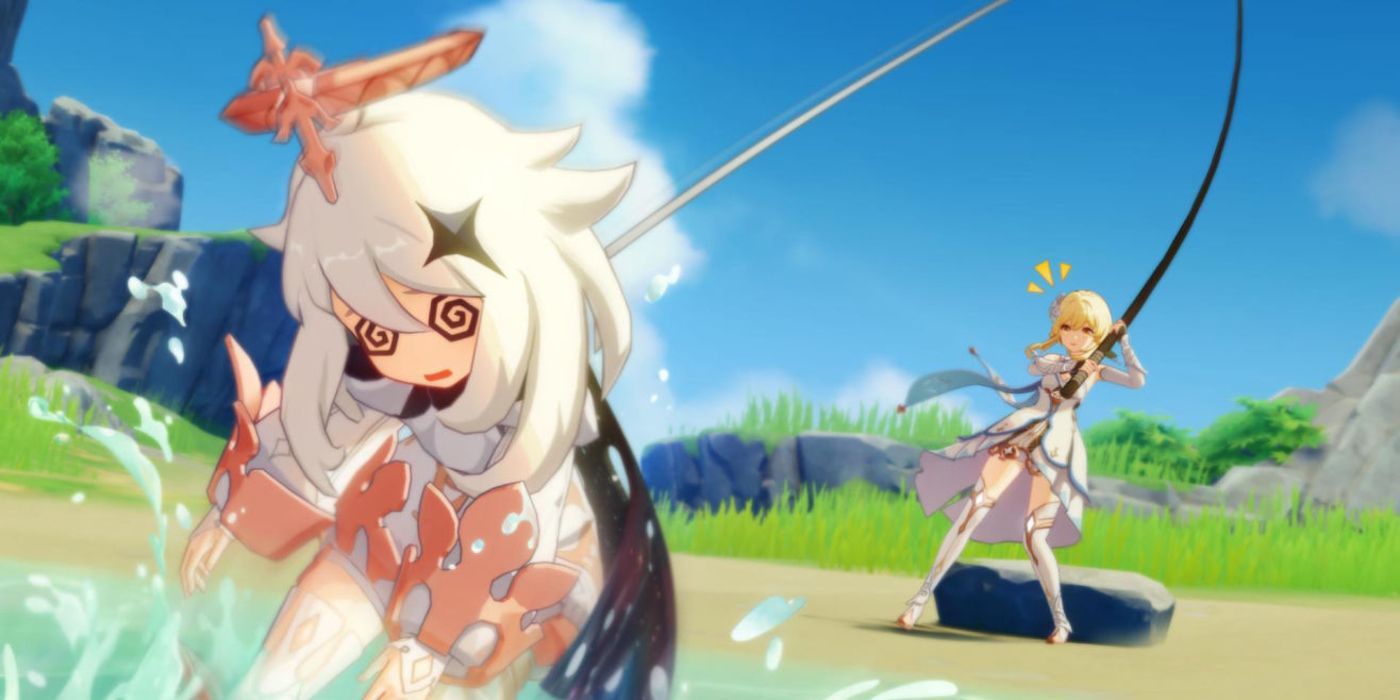 I think all of this is interesting to consider, but I also reckon we need to dive way deeper. I’m a bit of a sucker for aesthetic storytelling, where little hints are embedded into the environments of a game. From this perspective, we can see that the signs pointing to the possibility of Paimon betraying you are much more multifaceted than they might initially appear. I don’t think Paimon is necessarily going to be the final boss, but I do think she is going to be part of it.

At the beginning of Genshin Impact, before you even meet Paimon, your sibling is pulled away by an unnamed and ostensibly malevolent goddess. The whole opening scene for Genshin Impact is genuinely spectacular, to be honest. It oozes style, and it’s loud enough that it almost goes way over the top – if it wasn’t the preface for what soon amounts to a brilliant game, I’d even call it obnoxiously full of colour and noise.

But amid all of that loudness, there are flickers of something quieter. Have a look at this screenshot. 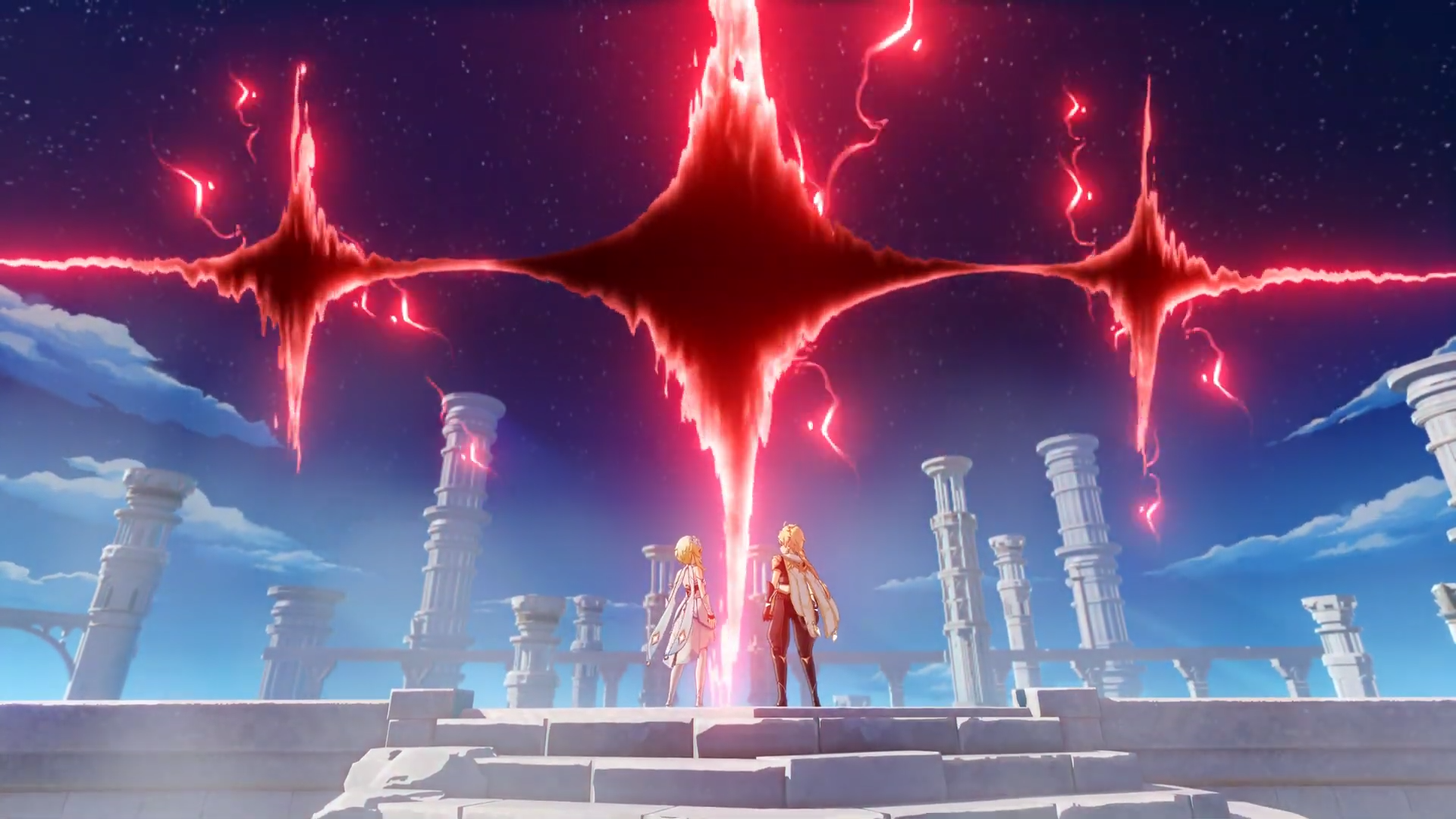 See that portal? It’s got a very distinctive shape, hasn’t it? Now take a look at this. 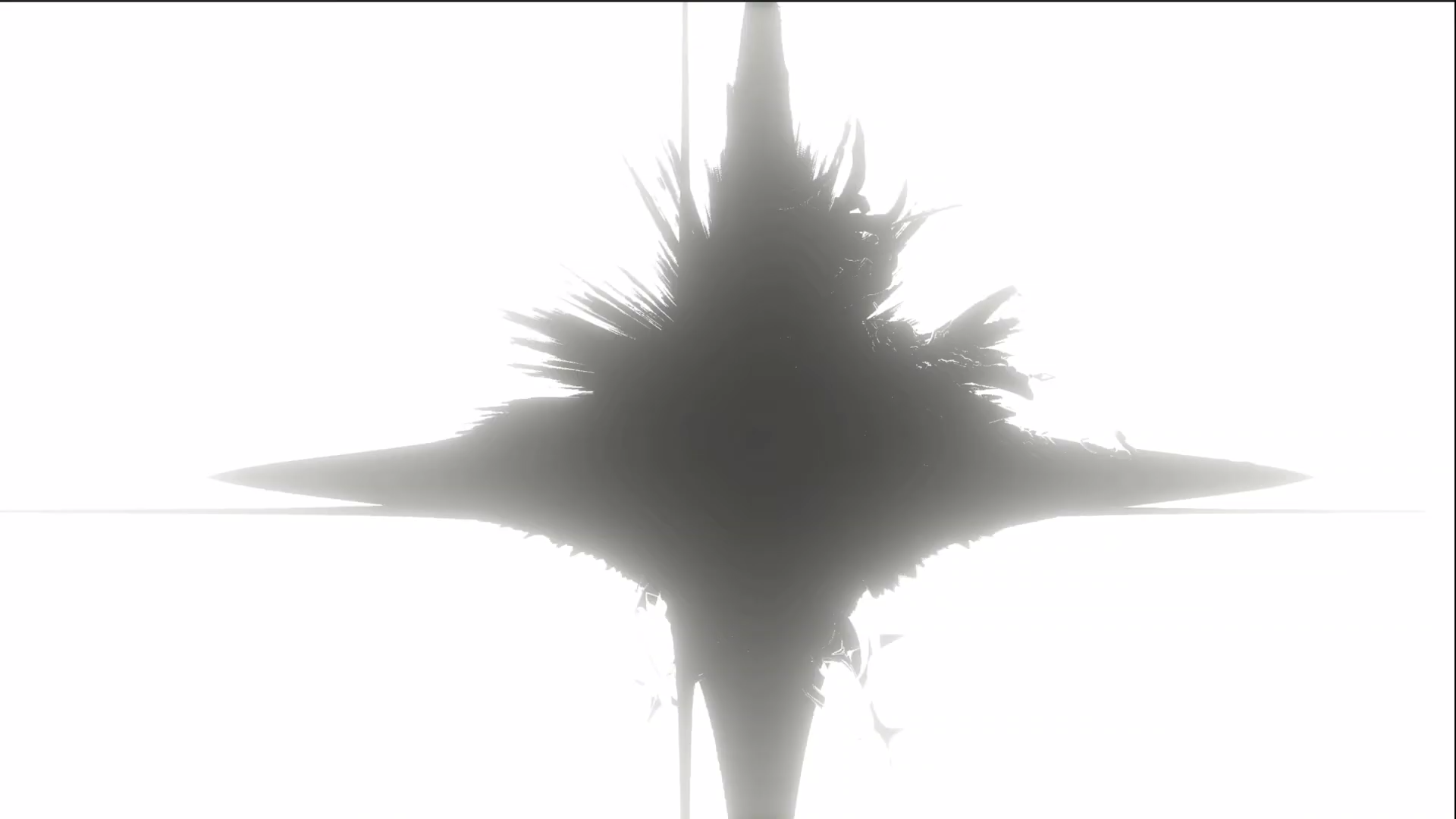 That’s the image that flashes when you lash out at the goddess and a magnificent clash erupts across the screen. It’s only a split second long, but it’s there.

Now, reader, do me a favour and take a look at Paimon’s hair clip. 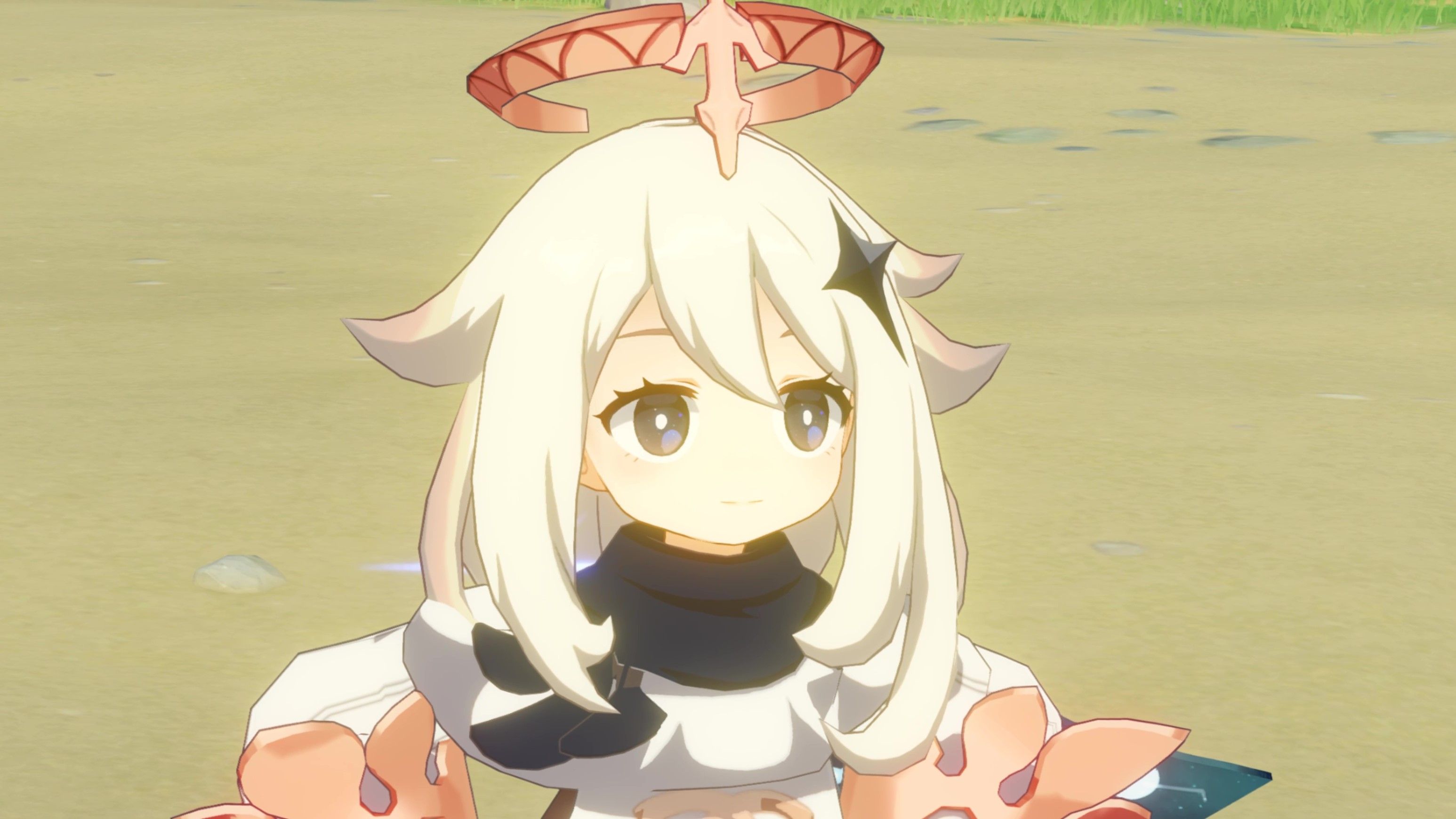 I don’t think it’s unreasonable to say that these objects aren’t just similar – they are exactly the same. Hundreds of years pass between the time you’re defeated by the goddess and when you wake up, and yet there Paimon is, equally new to her surroundings and wearing a clear symbol from a catastrophe only you experienced as a fashion accessory.

My personal impression is that Paimon is sort of like Marie from Persona 4 Golden – an unwilling medium through which the real antagonist can influence the world around them. I don’t believe that Paimon is malicious, but it makes sense that she’s tied to the goddess, especially given her powers that don’t line up with Paimon from mythology. The goddess uses portals and propels you towards a strange world hundreds of years in the future. She’s a goddess of space and time, it seems – and get this: when you pause the screen in Genshin Impact, everything around you freezes. Except Paimon. She’s still able to fly around freely, just knocking about and having a laugh. This is obviously pretty meta, but I’d also ask you to bear in mind that Paimon runs all of Genshin Impact’s social media – in-character. This could be a weird marketing gimmick, but considering loads of people don’t even like Paimon, and that her ability to transcend the game is addressed literally in the game, I reckon that’s something Mihoyo will make use of down the line.

Paimon being a segment or medium of the goddess of space and time plays into the mechanics of the game, too. She grants wishes, summons characters, and facilitates pretty much all of the game’s indulgences in exposition.

Oh, also, get this: I’m playing Dragonspine, and Albedo literally says Paimon might have enough unrealized power to blast through ten mountains. If that ends up being a comic relief coincidence rather than foreshadowing the realization of her being a bonafide goddess – or demon – I’m going to be pretty annoyed. I don’t want to fight Paimon, but helping her to free herself from a malevolent deity at the long-awaited end of a game like this? I can get on board with that for sure. Nobody is allowed to be mean to Emergency Food.

Next: Skyrim’s Dark Brotherhood Questline Has Nothing On Oblivion 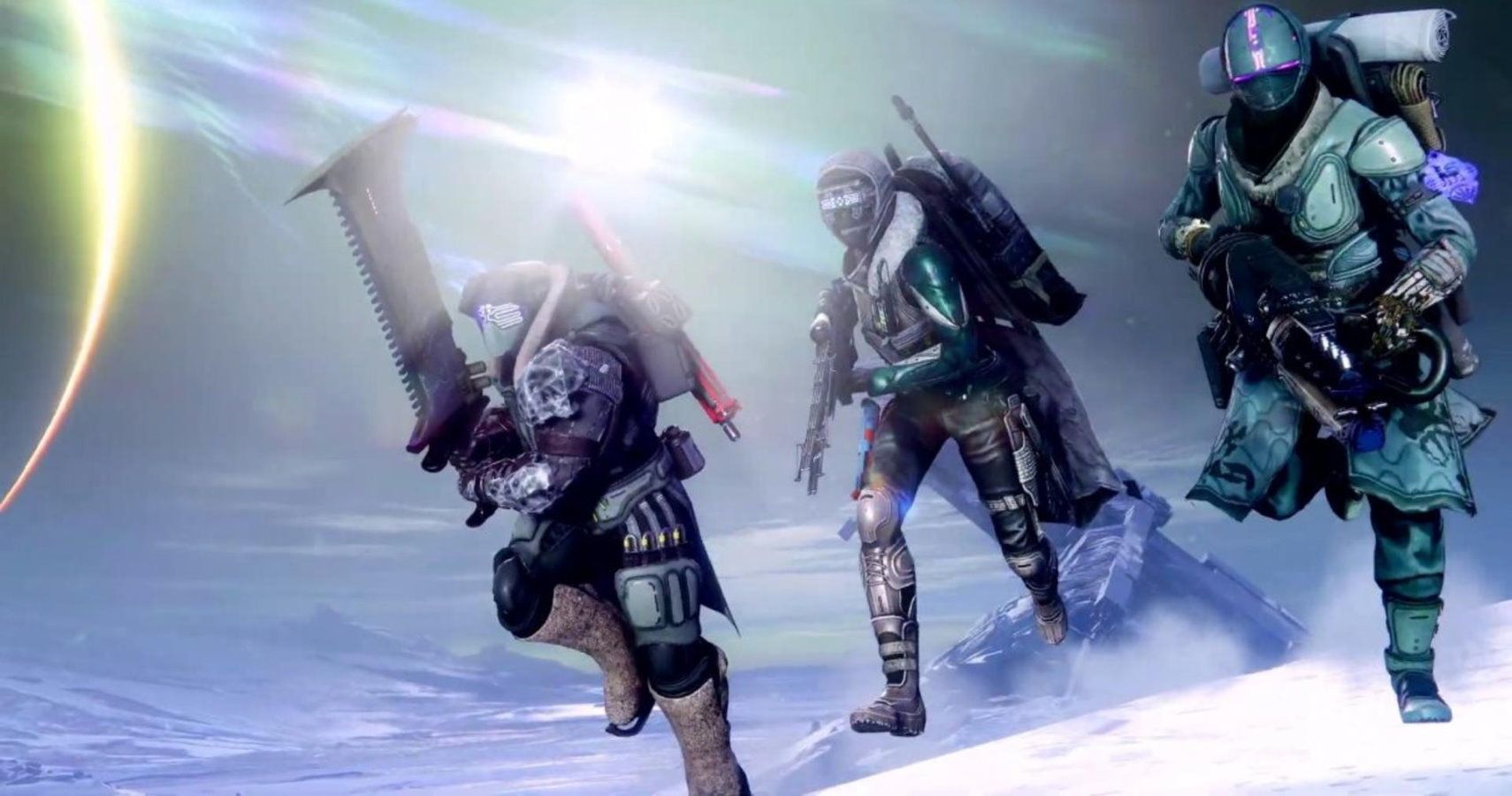