Mafia: Definitive Edition Review: A Kind Word And A Gun

Mafia has historically been pitched as a GTA clone, but that comparison is disingenuous. 2K’s dark horse franchise has carved out a unique niche for itself, in that the titles are mature crime games lacking in the eye-catching fripperies of their peers. This is a series committed to weaving ornate narrative tapestries at a deliberate pace, as opposed to guaranteeing player satisfaction at every turn.

And no other game in the series, perhaps, embodies this mentality more than Mafia: Definitive Edition. A remake of the 2002 original, Mafia is the very definition of a slow burn – told at a pace that would be agonizing if the story weren’t so enthralling. But despite the stellar narrative and fantastic atmosphere of the game, the lackluster gameplay made this slow burn singe me a little more than it probably should have.

Heavier Than A Wooden Overcoat 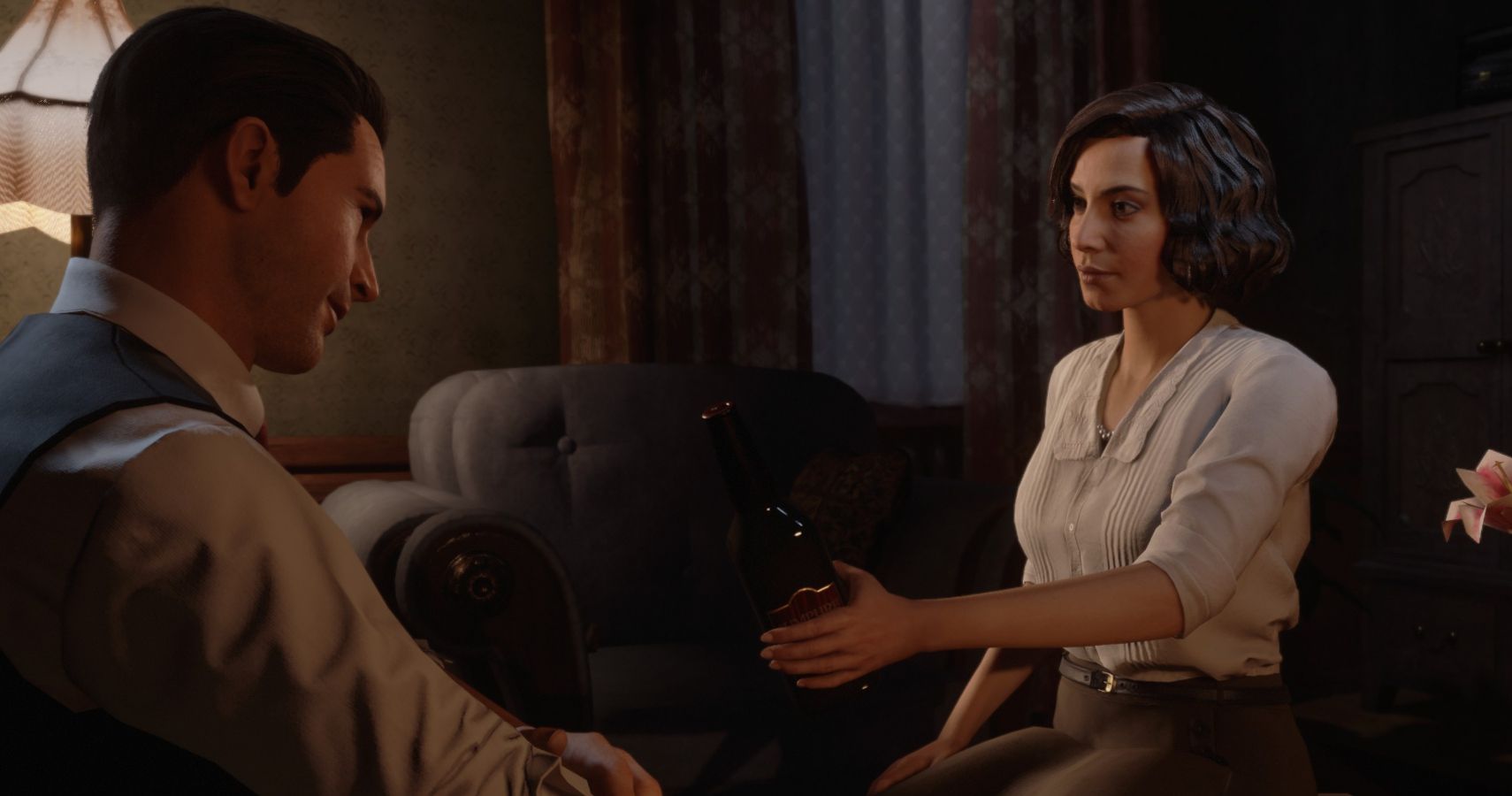 Mafia follows Tommy, a cab driver doing his best to eke out an honest, no-frills living in a bad neighborhood during the Great Depression. But times are tough, and the cabby’s having second thoughts about his commitment to a humble life. Cue a fateful shootout at a local bar late one night, which puts Tommy behind the wheels of two mafiosos’ getaway vehicle. To repay him for his help, the men give Tommy a chance to join the notorious Salieri family. Tommy’s now faced with a dilemma – does he enjoy a quiet but fraught life, or does he align himself with criminals to make a name for himself?

Of course, the choice he makes is pretty obvious – the game’s not called “Cabby,” after all. From Tommy’s humble beginnings as a driver to his ultimately tragic rise to infamy, Mafia hits the major beats of most criminal “rags to riches” narratives without ever feeling like trodden ground. The superb cast brings each and every dynamic character to vivid life, and it’s on the strength of those characters that the narrative works as well as it does. Couple that with a dogged commitment to genuine cinematic presentation, not to mention an astute and relevant social consciousness that permeates discussions of the Great Depression, and you’ve got a real winner.

That isn’t to say the script’s without fault – the game’s depiction of racism against Asian-American characters is period-accurate, but could’ve been done with a defter, more sensitive touch. On top of that, what few female characters are here aren’t the most compelling, and are a far cry from the complex supporting ladies of Mafia III. Yes, these are things symptomatic of 2002 gaming, but that doesn’t mean they’re any less worth calling out here. While these blemishes did very little to detract from the overarching plot for me, they certainly stand out.

Unfortunately, a major thing did detract from my enjoyment of Mafia: Definitive Edition: the act of actually playing it.

While this remake is a clear upgrade over the original, and absolutely a step up from the previous game, it’s simply still not very fun to play. Early melee combat feels legitimately awful, with hitboxes that barely make sense and clunky, repetitious controls that are pretty unacceptable by most margins. On a keyboard or a controller, the mechanics are imprecise and dodgy, and I actively dreaded any time the game wanted me to square off in a street brawl or back alley beatdown. Plus, the canned finishing animations (some seemingly lifted from Mafia III) repeat constantly, and don’t always respond the way they’re intended to.

As the game progresses, you’ll gain access to a tidy little pool of firearms. The gunplay fairs a bit better than the melee here, but it’s still pretty woeful. Every single gun, from pistols to shotguns to automatics, lacks punch and feels like a peashooter. Complicating things further are the game’s frustrating cover mechanics, which don’t work half the time and often left me frantically pacing in the middle of intense firefights. That said, being under enemy fire doesn’t mean a lot, as the AI in Mafia is gobsmacking in its lack of intelligence.

However, what makes the awful combat in this game more bearable is that you’re not doing it all time. Mafia isn’t really an open-world game (although the original’s Free Ride mode makes a return,) and because of that, it only ever shows you what it wants you to see. That means every shootout or brawl feels purposeful. Setpieces are built around you shooting from a certain angle, picking up a certain weapon, or activating a certain object in the environment. It all serves the game’s cinematic vision, and while I wish the mechanics themselves weren’t so underwhelming, I’m glad that I’m not repeating them ad nauseum for arbitrary check marks on a map.

Going For Distance, Going For Speed

Thankfully, there’s a saving grace here, and it’s a big one: the driving. I’m one of the weirdos who liked Mafia III’s vehicle handling, and I’m happy to say that Mafia’s driving feels like a more polished version of that. You’ll be doing a lot of it, too, from chases to stock car races to thrilling small-scale stunts – not to mention the literal hours of driving from point A to point B while somebody dumps exposition on you.

When the game puts you behind the wheel of a vehicle, it sings, and the delicate nature of the controls demand that you master every nuance through the 15 to 20-ish hour game. Some people might not get the appeal of maneuvering finicky 1920s automobiles through cramped streets, down country roads, or around race tracks, but for a certain audience, this is one the most unique driving experiences on the market.

Ultimately, your enjoyment of Mafia: Definitive Edition is going to be contingent on just how much you’re willing to overlook. If the bad gunplay and woeful fisticuffs don’t scare you off, you’ll be treated to an entrancing story brought to life with sumptuous visuals and expert sound design. But if mechanics make or break an experience for you, well, you might be out of luck.

But that doesn’t mean, to me, that Mafia is a bad game – far from it. It’d be hard to classify something with this much emotional resonance, honesty, and maturity as “bad”. However, it is a challenging game – the sort that you give a reserved recommendation, a real “it has some problems but I liked it” situation. If you’re looking for a smooth, polished experience, then yes, you might want to leave this one sleeping with the fishes. However, if you’re in the mood for a slow, moody mafia yarn with an excellent atmosphere and a compelling story, then Mafia’s a decent contender.