Does anyone else feel like their V looks like circus clown 24/7? I’ve pretty much given up on maintaining a look because it seems like every time I spend my eddies on a nice outfit I end up finding some cut-off denim shorts and a feather boa that give me +20 armor and make me look like an EDM kid on the last day of Burning Man. It’s throwing a major wrench in the RP part of my RPG and I wish there was a better system for fashion.

I spent a full hour customizing the look of my character before I started playing Cyberpunk 2077. By the time I finished customize his eye color, shoulder width, and the exact length of his facial hair, I felt like I had gotten to know my V on an intimate level. It’s a ritual I start every RPG experience with because I feel like it helps me to get to know my character better before I enter their world and start making choices for them. My favorite thing about games like Fallout and Skyrim is the way I can immerse myself in the game and use the player character as a surrogate to experience the world and the people that inhabit it.

I want to become my version of V when I play Cyberpunk. I dumped a considerable amount of points into the Cool attribute when I started. My V is a smooth talker that never cracks under pressure. He’s skilled with blade weapons and an expert at stealth. In my head, V wears casual street clothes that don’t make him look like he’s trying too hard to posture or intimidate anyone because he doesn’t need to. He can blend into a crowd — or the shadows — to sneak his way anywhere he needs to be. If he can’t talk you into giving him what he wants, he’ll simply take it without you even noticing. That’s how I’d like to play V, but it’s pretty hard to live that fantasy when I’m running around dressed like this. 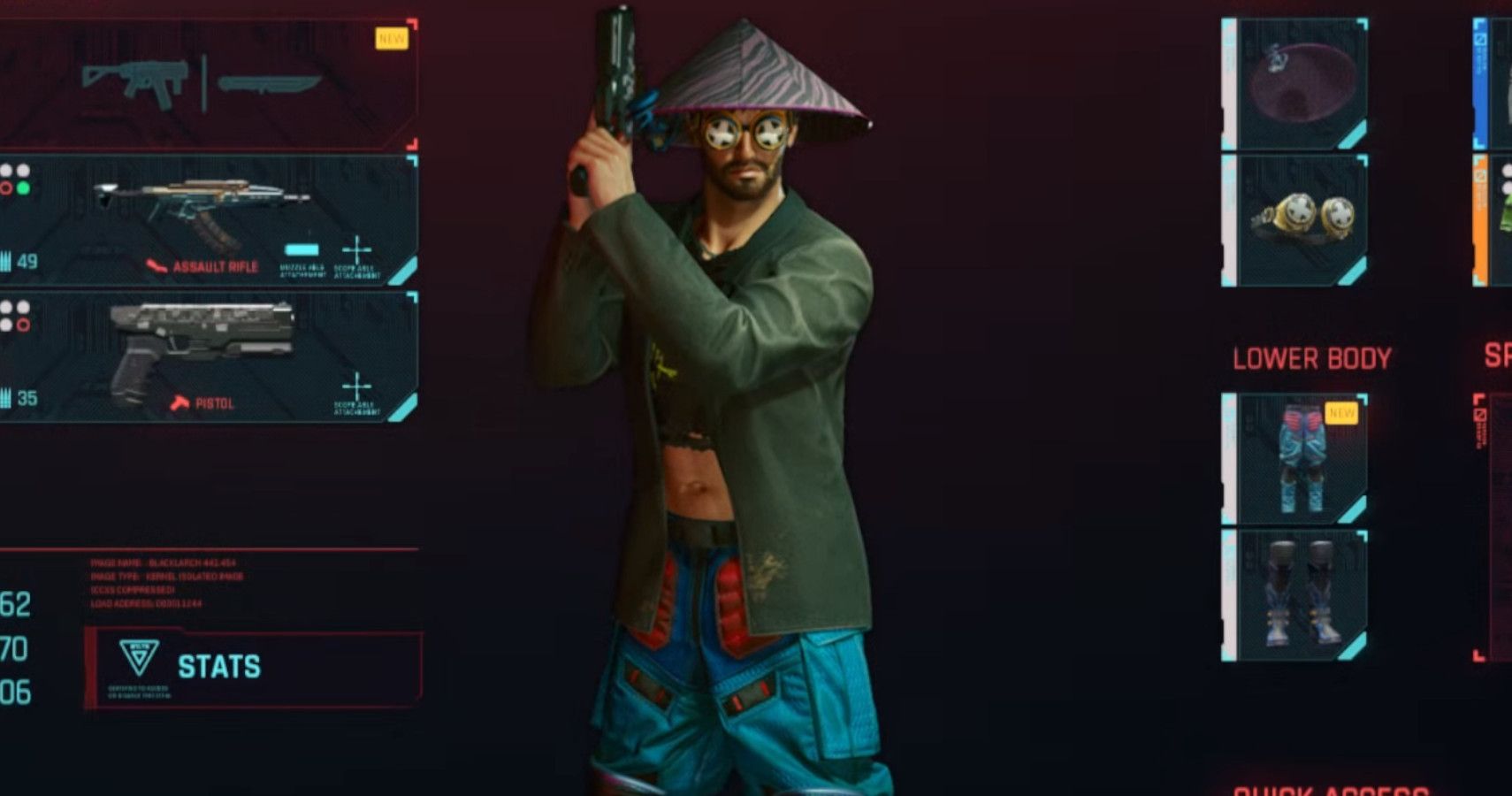 Look, I don’t want to wear a rice paper hat and a crop top under a dirty green blazer. That doesn’t really scream “confident man of mystery” to me. The problem is I also don’t want to get shot and die, and this particular outfit is the highest-stat gear I have right now. My clothes change fairly regularly in order to keep up with the best stats I can, but inevitably I always end up looking like a total dick.

There are ways to mitigate this, I understand. There are “special” outfits that go over your clothes and let you keep your stats. So far, I have bandages and a morph suit that makes me look like Raiden from MGS2. Maybe there’s a special outfit that matches the look I’m going for, but after 40 hours I haven’t found it.

I know I can upgrade gear too using the crafting menu, but if you sink time (and resources) into upgrading you’ll discover that it’s extremely expensive to upgrade a hat when just putting on a different hat is free. You can also add mods to clothes that increase armor, but the mods can’t be removed once they’re put in. This is yet another expensive solution to something that could be fixed with a simple transmog system. I’d be happy to keep two items in my inventory: the one I’m wearing and the one it looks like I’m wearing. That way I could keep my defense high and not worry about looking like I huff paint fumes and get dressed in a dumpster.

READ NEXT: Cyberpunk 2077 Is Going To Save Stadia