Home » Reviews » Hardspace: Shipbreaker sends you to space, where it’s too expensive to die

Hardspace: Shipbreaker sends you to space, where it’s too expensive to die

On May 30, SpaceX successfully launched the Crew Dragon spacecraft into orbit aboard the company’s Falcon 9 rocket.

It was the first crewed rocket launch from U.S. soil since 2011, and the first privately built spacecraft to carry humans to the International Space Station. The Crew Dragon’s success marks a historic turning point, not only for America’s space program, but for the nascent privatization of space exploration.

While NASA has certainly contracted private companies like Boeing to build and assemble its hardware in the past, what sets this new generation of aerospace apart from the old days is a marketing-driven cult of personality concentrated on businessmen like Elon Musk and Jeff Bezos, lionizing them as messianic saviors of humanity rather than, say, capitalists looking for government contracts.

What would a world where unscrupulous spacefaring robber barons who have monopolized virtually all means of class mobility look like, though? How different would that future be from our present? We like to believe that travel to the stars would somehow improve our lives, but wouldn’t it just be another place for working-class folks to be exploited?

Hardspace: Shipbreaker takes place in such a future. The inner solar system has been colonized and connected through a network of massive Rail Gate terminals owned and operated by LYNX, the largest corporation in existence. Earth is an afterthought these days, abandoned by the rich and blighted by civil unrest, extreme poverty, food scarcity, and climate change. It’s a lost cause, and everyone who can leave has. Sci-fi allegories criticizing the moral and ethical lapses of laissez-faire capitalism have been having a moment recently in video games, and Hardspace: Shipbreaker continues to carry that torch.

Players assume the role of a blue-collar contractor working on behalf of LYNX as a spaceship salvager, or “cutter,” harvesting derelict cruisers and mammoth starships scavenged from the far corners of the galaxy, in exchange for safe passage off-world. What happened to those ships before you got there? Well, that’s questionable and maybe legally murky. But salvage laws aren’t, and there’s money to be made.

There’s a catch, though: You sign away your rights as a private citizen when you become a shipbreaker, forfeiting ownership of your genetic signature to LYNX. You’ll be promptly resurrected as a clone in the event of your untimely death in space, and you must then work off the cost of that replication. It’s a dangerous job, but death is a situation that’s damaging to your bank account, not your actual existence.

You can see why the situation is so insidious: You make some cash when you do well, but you owe a bigger chunk of cash when you’re destroyed. Thus, you’re stuck working in order to pay back the company for your new body. There’s no way out once you’re caught in the system, which operates much like a hard-labor version of a payday loan.

Knowing where the problem spots are is half the battle.
Image: Blackbird Interactive/Focus Home Interactive

You literally can’t afford to die in Hardspace: Shipbreaker, because, in the immortal words of Merle Travis, you owe your soul to the company store.

At its core, Hardspace: Shipbreaker is a first-person, sandbox-style space simulator in zero gravity. You sign your life away, you’re whisked off to the Morrigan salvaging station to begin your training.

You’ll spend most of your time salvaging ships for raw materials using a suite of tools such as modular cutting torches, gravitational tethers, and a grappling gun. Your helmet-mounted scanner transforms every ship into a translucent framework of key materials and highlighted support structures. You can melt those supports with your torch to remove entire panels for access to new areas. Your grappling gun lets you collect assorted salvage and propel yourself back to certain structures on your own ship, so you can turn what you’ve gathered into usable materials or scrap.

Each ship is procedurally generated from a set of two classes: the Mackerel, a 30-meter cargo cruiser with three different configurations, and the Gecko, a 60-meter freighter with two variants. Aside from the obvious salvage and cargo, each ship is populated with a randomized assortment of audio logs, encrypted data files, and other collectibles that you can access back at your habitat. They offer bits and pieces of insight into the history of LYNX, the game’s larger universe, and the lives of the ordinary folk just trying to make an honest living among the stars.

The game’s writing strikes a fine balance between serious sci-fi world-building, biting corporate satire, and deadpan irreverence. Hardspace: Shipbreaker’s loading screens feature excerpts from the LYNX employee manual and in-universe history books detailing everything from the company’s unofficial ownership of Earth to company-mandated warnings cautioning you about the dangers of using your laser torch to slice baked goods.

Every salvaging session begins at your “Hab” — your private living quarters located at the far end of the Morrigan station’s salvage bay, where you can repair your tools and equipment, buy upgrades, and select new ships from LYNX’s catalog to work on. You can only salvage one ship at a time, so once you’ve chosen to start work on another ship, you forfeit whatever remains on your previous job.

The actual act of shipbreaking could aptly be described as a cross between deconstructing a Rubik’s Cube and playing a high-stakes game of Operation.

The first step to effectively salvaging any ship is breaking in, which means either activating your helmet scanner to find an airlocked entry port or just cutting a hole in the side of the ship. (Word to the wise: Don’t do the latter.) But getting in is the easy part; the challenge comes in getting your salvage out without losing life or limb, and things can quickly become tricky.

The many passive dangers found in any one ship are never as life-threatening as your own ignorance, or disregard of the risks that fill this environment. Flammable fuel tanks, electrified power cells, antifreeze coolant tanks, small-scale nuclear reactors — any one of these things can be effectively salvaged to pay back your debt, but one errant snip for your laser torch could also result in a minor catastrophe that could not only injure you, but also trigger a massive domino effect of successive explosions destroying whole sections of the ship (and causing your death).

Oh, and don’t forget violent decompression, which occurs when you improperly open an interior airlock or use your laser torch without first finding the atmospheric regulator and depressurizing the room. There are always a lot of things to worry about and consider, but for the most part, each risk is communicated through on-screen warnings delivered through your scanner and heads-up display. All you need to do is stay vigilant and careful, and you’ll be fine. Probably.

Everything you do in Hardspace: Shipbreaker is mediated by the forces of debt and capital. You own nothing; not your equipment, not your salvage, not even your own life. Salvaging sessions are divided into 15-minute shifts, and you must get the work done as quickly as possible to maximize profit. You return to your private quarters — leased from LYNX, of course — between jobs, and it’s there that you’re charged a rental fee for the use of your tools and salvage bay.

Oxygen and thruster fuel is used every time you go out, and they can either be scavenged from the ships you salvage, replenished at the end of your shift, or purchased through the LYNX store terminal conveniently placed right outside your quarters. Every action is haunted by the specter of debt or the hope of profit, but the odds never seem stacked in your favor.

And yet, despite the bleakness of the situation, there’s nothing quite as exhilarating as breaking a ship apart. There’s something supremely Zen about floating in zero-g, slicing along the bolted seams of a derelict wreck as you harvest its insides. It’s like shucking a husk of corn, if there were a chance the corn could explode in your face. Witnessing a massive starship crumble to pieces as it’s torn apart from the inside out with a couple of meticulously placed gravity tethers, it’s hard to not marvel at the accomplishment and feel like the most powerful person in the universe — if only for a moment.

You’re awarded LYNX Tokens that can be spent on upgrading or repairing your equipment with every successfully salvage session and completed “work order” objective, as well as certification ranks that unlock more advanced gear or upgrades, along with access to larger, more troublesome ships that are worth more in salvage.

The fundamental tension between speed and caution, debt and profit, panic and relaxation, creates the spark that brings Hardspace: Shipbreaker to life. It’s a game that understands that rare stoic wisdom that it’s still possible to take pride in your work, even in the shittiest of conditions.

You’ll likely never be as wealthy as any member of LYNX’s board of directors, who’ve seen fit to exploit your labor, but not one of them could break a ship apart near as well as you can. That satisfaction may not objectively mean much in the game’s world, but it feels like just about everything in that moment, floating in space, doing your job to the best of your abilities.

You may be in control of how much risk you’re willing to take on, but the risk will almost always outweigh the potential reward. In the future, space may be a higher-stakes version of every other crappy job out there — just one with a much better view.

Hardspace: Shipbreaker is now available in early access on Windows PC. The game was reviewed using a download code provided by Focus Home Interactive. Vox Media has affiliate partnerships. These do not influence editorial content, though Vox Media may earn commissions for products purchased via affiliate links. You can find additional information about Polygon’s ethics policy here. 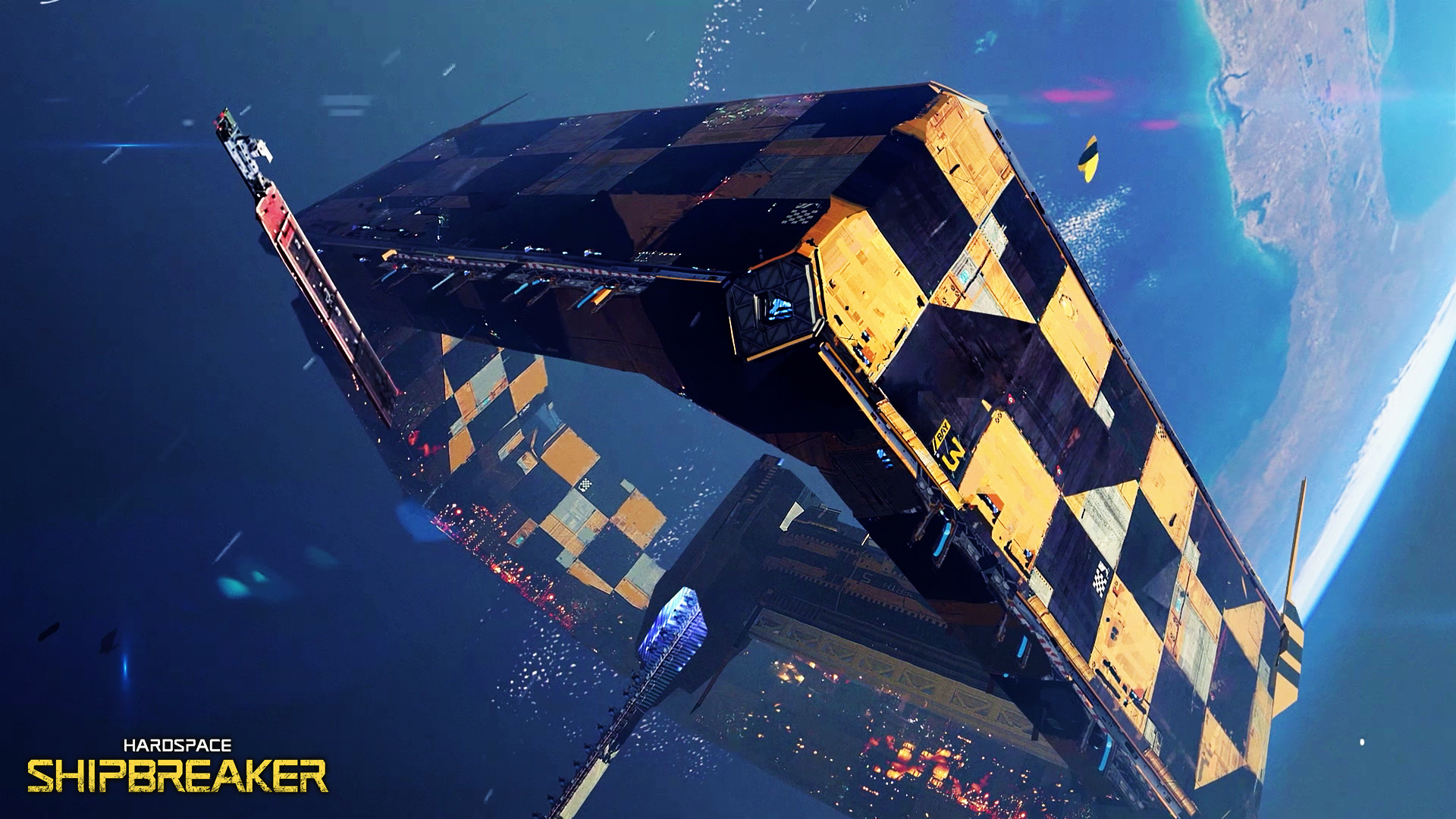 Across your career, you’ll have the privilege of paying your debt to us by purchasing salvaging rights to increasingly large and valuable ships. Cut them open and extract as much value as possible!