Kart racers bring out the best and the worst in us. There’s a slippery slope from enjoyment to frenzied rage, and even if you are the best driver in the world, everything can be scuppered by a bout of bad luck. Trust me, that feeling of getting hit by a status effect inches from the finish line while some smug Chocobo sails past you to snipe first place is not one you will get over lightly.

I’m an overly competitive person by nature, so regardless of whether I’m up against AI or real players, I want to win. Naturally, this meant when playing Chocobo GP, I spent a ridiculous amount of time ensuring I placed first in every race, even if it came at the cost of a few late nights and some bad hand cramp.

Launching Chocobo GP for Nintendo Switch puts it in direct competition with the king of kart racers — Mario Kart. If it had launched on any other platform, it would have at least given players a fresh kart racer without the worry of butting heads with the reigning champ in the genre. I doubt anyone is going to pick this up and expect it to steal first place from Mario Kart, so like me, you’re probably going to play because you’re a massive Final Fantasy fan, or you at least have a love of big yellow birds. 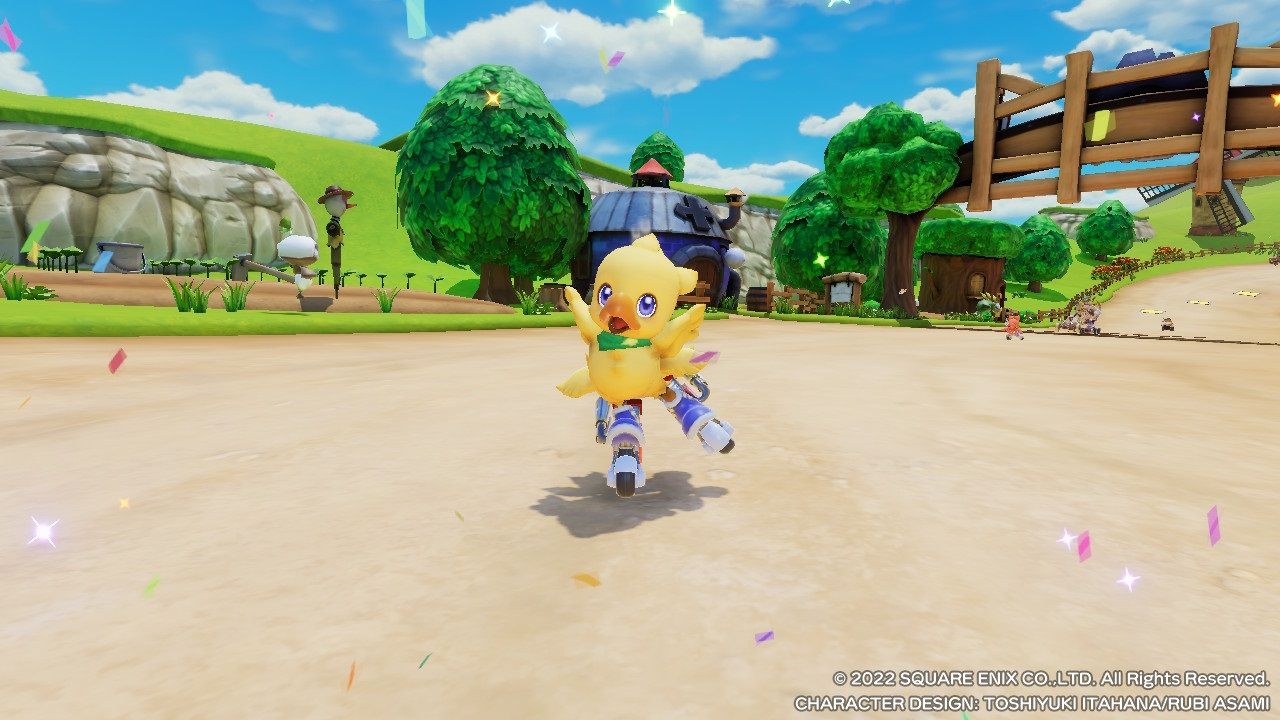 As far as kart racers go, you’ve got everything you need. A fair range of characters with unique abilities, kart upgrades, different power-ups, and a couple of difficulty levels. You’ve also got plenty of modes to pick from, you know, the usuals — Time Attack, Series Races, Custom Races, and Multiplayer options, including local co-op. There’s also a Chocobo GP mode where 64 players compete against each other online.

Then there’s the Story mode. You don’t expect groundbreaking storylines for arcade-type games, but even with a lower expectation, this one got old really fast. Go somewhere new, meet new characters, race on a new track, Gilgamesh arrives, race again, rinse and repeat. It wasn’t just that the premise was a bit dull, the cutscenes just weren’t enjoyable either.

Chocobo GP is one of the better kart racers out there. The tracks are well-made and offer enough challenge and varying obstacles to keep it feeling fresh, while the kart controls avoid that clunky feeling you sometimes get in other racers. It definitely has its charm and put quite simply, it’s fun. It’s an easy title to pick up and play, whether that’s in short bursts or prolonged sessions to fuel your need to win.

You can’t help but compare Mario Kart and Chocobo GP, and Chocobo’s never going to win that race. Mario Kart seems to have a certain balance to its items, despite the chaos of random luck. However, the Magicite items in Chocobo GP don’t seem to hit the same note, and the Swap Magicite in particular seems too overpowered in comparison to the others. It creates a pair of portals — you go in one, then out the other — so you skip a chunk of the track and move up a number of places. 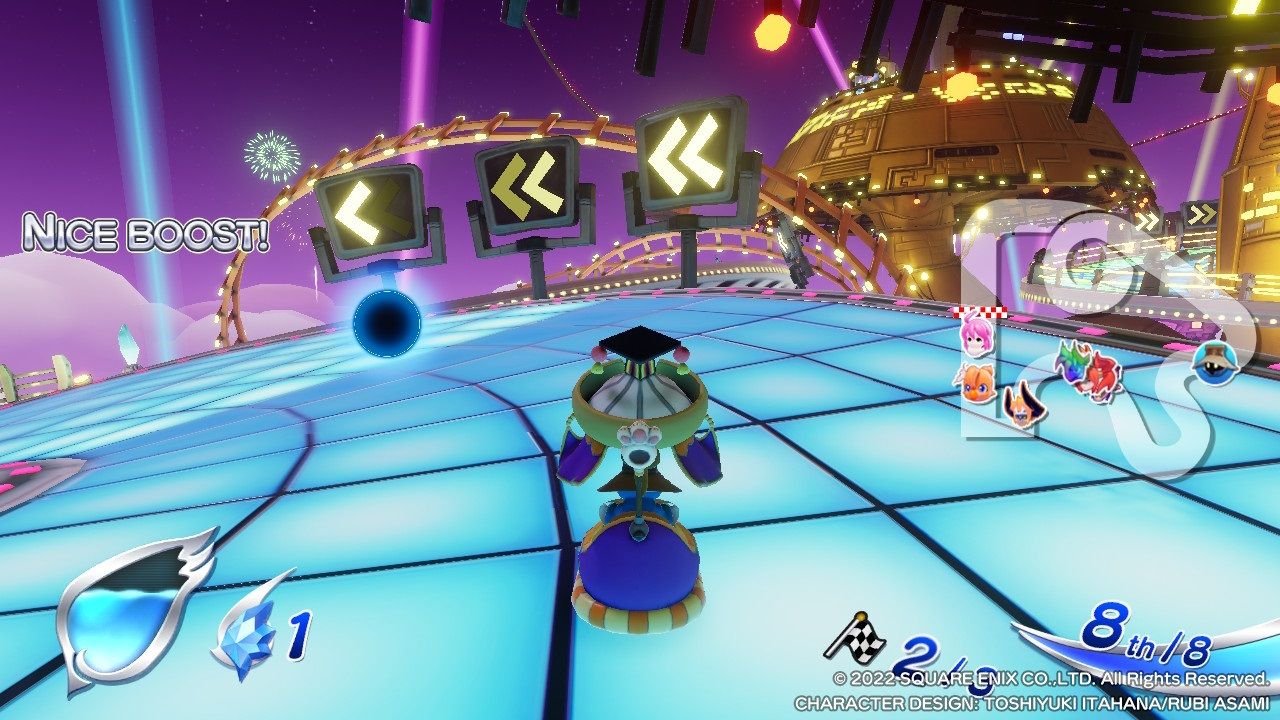 The thing is, the portals work both ways and for everyone. So fellow racers can also jump in your portal and reap the benefits too, or you can find yourself accidentally driving into someone’s second portal and getting thrown from first to last place as you portal backward along the track.

One thing that Chocobo GP does well is that not only can you hold three different Magicite at any one time, but you can also stack three of the same kind of Magicite to power them up further. For example, your single Fire Magicite can become Fira with two, or Firaga with three, giving you an even greater benefit when used. This brings into play a whole new level of strategic thinking when racing.

Beginner Mode seems to have a steep learning curve, by the final race or two you really have to have your drifting skills on point — ensuring you get those much-needed speed boosts — to snatch the crown. Whereas Mario Kart’s 50cc races have always been a bit more forgiving, allowing younger or less experienced players a chance to play through, enjoy the game, and more importantly, to win. 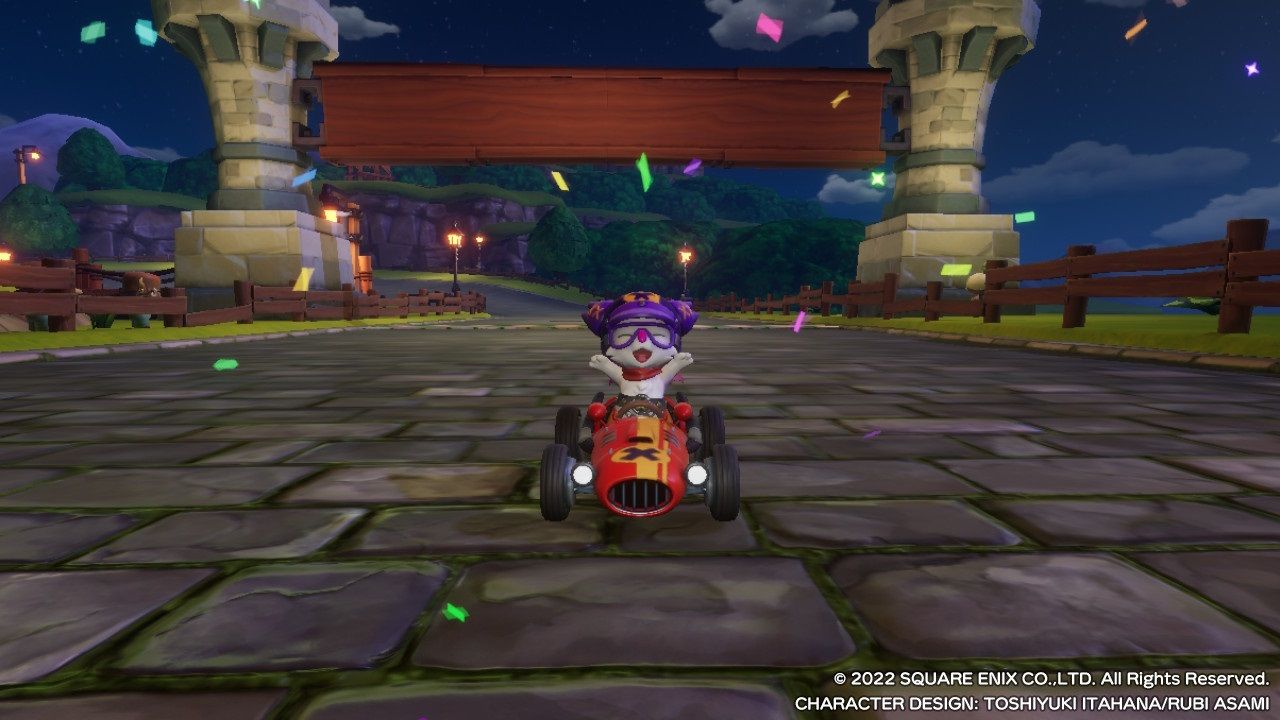 One of my initial gripes with the game was the unnatural button layout. In particular, pressing Y to use your ability was an awkward setup. This was short-lived after a quick visit to the options menu. While there are multiple layouts to choose from, I didn’t have to change anything. By default, ZL is also an ability button and is much easier to press while you’re racing. I have no idea why the game prompts you to press Y instead of ZL when it is the more obvious choice, but please learn from my mistakes.

With such a wealth of games to the Final Fantasy name, you’d think Chocobo GP was going to be absolutely jam-packed full of fan service moments, cameos, and easter eggs. Though there are references — every track, song, and character is a throwback to something or someone in the franchise — it doesn’t feel substantial enough.

There are a few funny lines that throw back to past games, but most get over-used and you just tire of them. Yes, they’ve forgotten Gilgamesh, again. This stopped being funny five race tracks ago. While it was nice to see a bunch of recurring characters, music, and locales from both the Final Fantasy and Chocobo series make an appearance, it was all rather underwhelming. 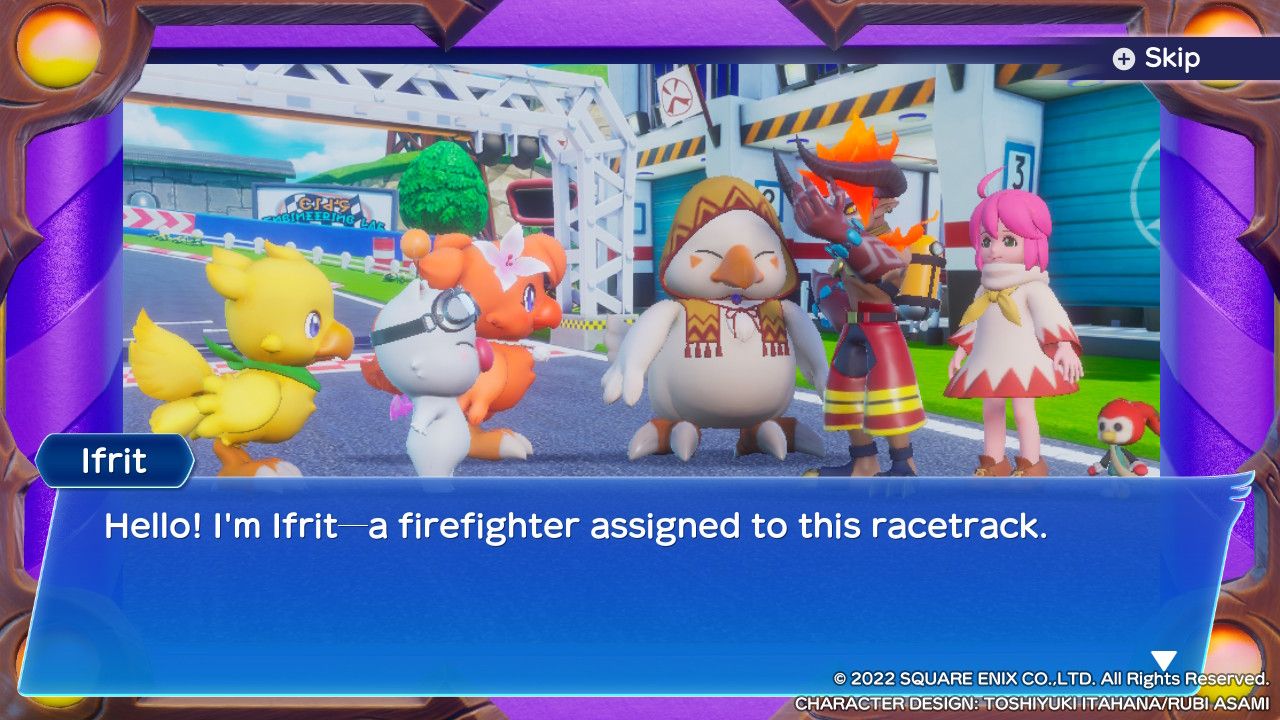 Ifrit, a fan-favourite summon and boss throughout the Final Fantasy series, features as a humanoid firefighter. That’s right, the fire-elemental summon is a firefighter. I get that the aim was probably humorous irony, but nearly all of the characters in the game feel like a two-bit over-simplified version of the original character they are based on.

I love that the Magicite power-ups feature familiar spells from the franchise — just like Chocobo Racing’s power-ups — but I especially loved that Bahamut can be summoned this way too. I wish the other summons had appeared as Magicite as well, instead of the weird NPC variations we received. Those character roles could have then gone to bigger personalities from past titles, such as the Onion Knight, Firion, Vaan, or Yuna, and perhaps then I may have felt like my Final Fantasy appetite had been sated a little more.

I loved the attention to detail in some aspects of the game, such as making sure the karts are fitting for each character. Vivi, my favourite go-to once unlocked, has three different rides based on Cid Fabool IX, Grandpa Quan, and Black Waltz, and they’re all flipping adorable. Yet in other regards I felt like the game could have upped the ante — Vivi goes into Trance mode for his ability, why not make his steeple hat become pointed like it does when he Trances in Final Fantasy 9? Little touches like that would have made a world of difference to die-hard fans. 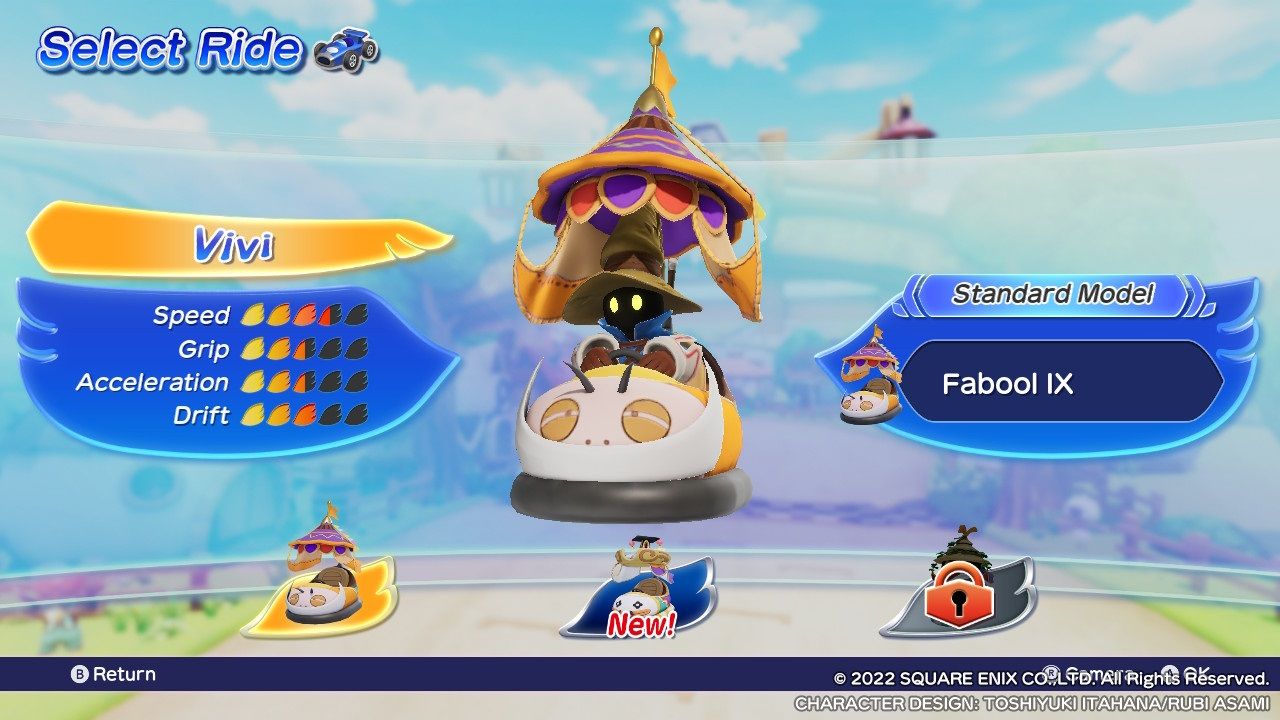 The Final Fantasy series is often lauded for its amazing soundtracks, so I have good news for you — some of the best tracks are remixed in the game. However, they’re hidden under unassuming names. Man with the Machine Gun is masquerading as Hero X’s Theme, while Waltz for the Moon is named Choco-ball. It’s just a shame that the main Chocobo GP theme that plays on loop in the menus is an annoying mixture of kids' TV show tune meets Disneyland ride queue music. It should have been named Irritating de Chocobo.

I do believe the fan service I so desperately crave will arrive, it’s just, unfortunately, going to be in the form of the season pass, which already promises Cloud and Squall for the first season. Seasons will be held every two months or so, and with these players can play to rank up their level and unlock items Fortnite Battle Pass style. At launch, you’ll also be able to buy Mythril, an in-game currency used to purchase Prize Passes, which promise even more exclusive rewards.

It’s safe to say that Chocobo GP doesn’t out-do Mario Kart, but then I don’t think anyone would ever really expect it to. Most players, myself included, will simply choose this title because they love Final Fantasy, not because they think it’s going to be GOTY material. It’s a fun kart racer that you can easily while away your time with, but ultimately brings nothing groundbreaking to the genre. If you’re looking for a Final Fantasy fix, it might not quite hit that sweet spot for you, at least, not until you hand over your hard-earned gil for the season pass.

Score: 3/5. A review code for Nintendo Switch was provided by Nintendo.