Reviving a storied franchise like Baldur’s Gate after 20 years comes with baggage. There are expectations from Baldur’s Gate fans hoping to see familiar characters and locations. There are Dungeons & Dragons obsessives who demand that every spell and ability works the same in the video game as it does in the tabletop version. And then there are Larian Studios groupies who have fallen in love with its Divinity series and expect that Baldur’s Gate 3 hews closer to that format. Can this role-playing game really bring all of these camps together? Based on what we saw this week, the answer is a tentative yes. But it doesn’t look easy.

How do you merge the legacy of Baldur’s Gate with the modern combat engine of Divinity? After watching a two-hour demo of Baldur’s Gate 3, it’s clear that Larian’s solution is to employ almost all of the advancements from the Divinity: Original Sin games, but translate them into the Dungeons & Dragons ruleset to create a hybrid of the old and the new. 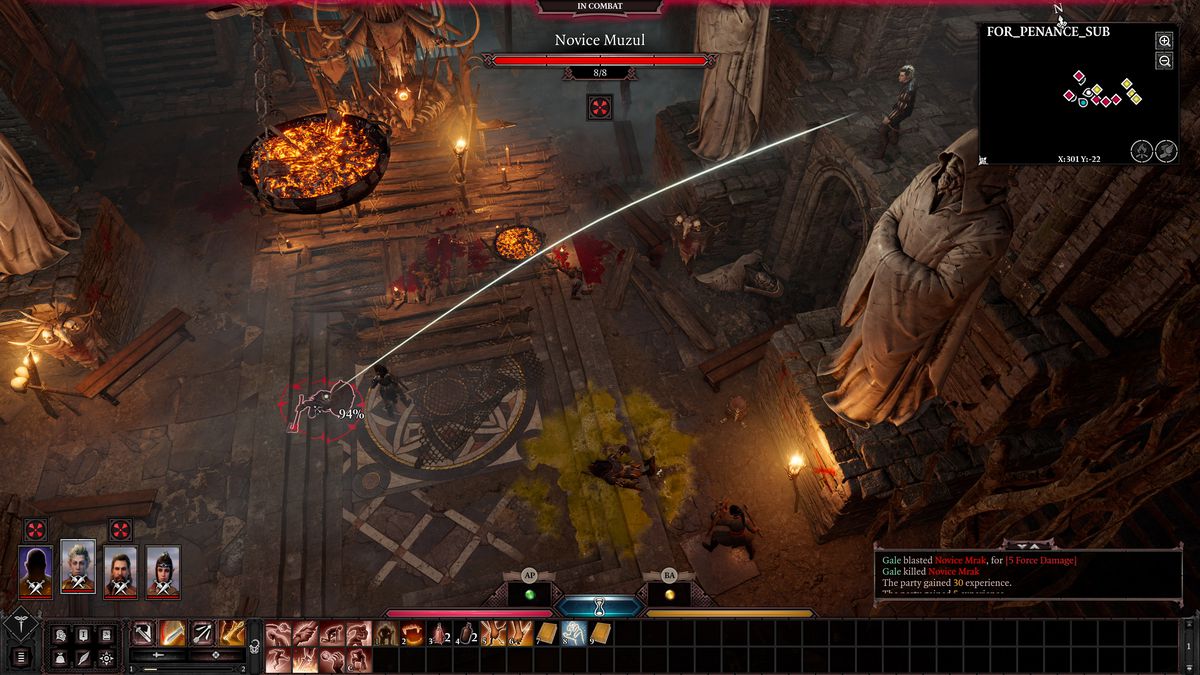 Divinity with a D&D coat of paint?

Divinity: Original Sin and its sequel are stellar modern takes on the classic computer role-playing game (CRPG) genre, originally made famous by games like Baldur’s Gate. So it makes sense that Divinity developer Larian Studios would tackle the return of the storied franchise.

But there’s a problem with that: The Divinity games play very differently from the Baldur’s Gate games.

In Divinity: Original Sin 2, for example, I can sneak up behind an enemy guard standing at the top of a wall and push him off with a physics-based shove. The original Baldur’s Gate engine, designed in 2D, had no physics to speak of. Combat all took place on the same plane or level, so elevation wasn’t a concern — and there weren’t any environmental interactions (a fireball turning a pool of water to steam, for example) either.

Mostly, playing Baldur’s Gate was about casting spells, swinging swords, and doing direct damage. The environments were almost secondary. Meanwhile, in the Divinity games, environmental interactions and reaching high ground are integral strategies that can make or break a fight.

In Baldur’s Gate 3, you can still use the physics engine to shove someone off a high ledge (or drop a heavy box on them), as you can in the Divinity games. You can still set pools of oil ablaze with a well-placed fire spell (a Divinity staple), and you’ll still do more damage by reaching a higher elevation.

After watching the demo, Baldur’s Gate 3 feels like it has 80% of the DNA that Original Sin 2 had. If you had told me this was Original Sin 3, I wouldn’t have been shocked. 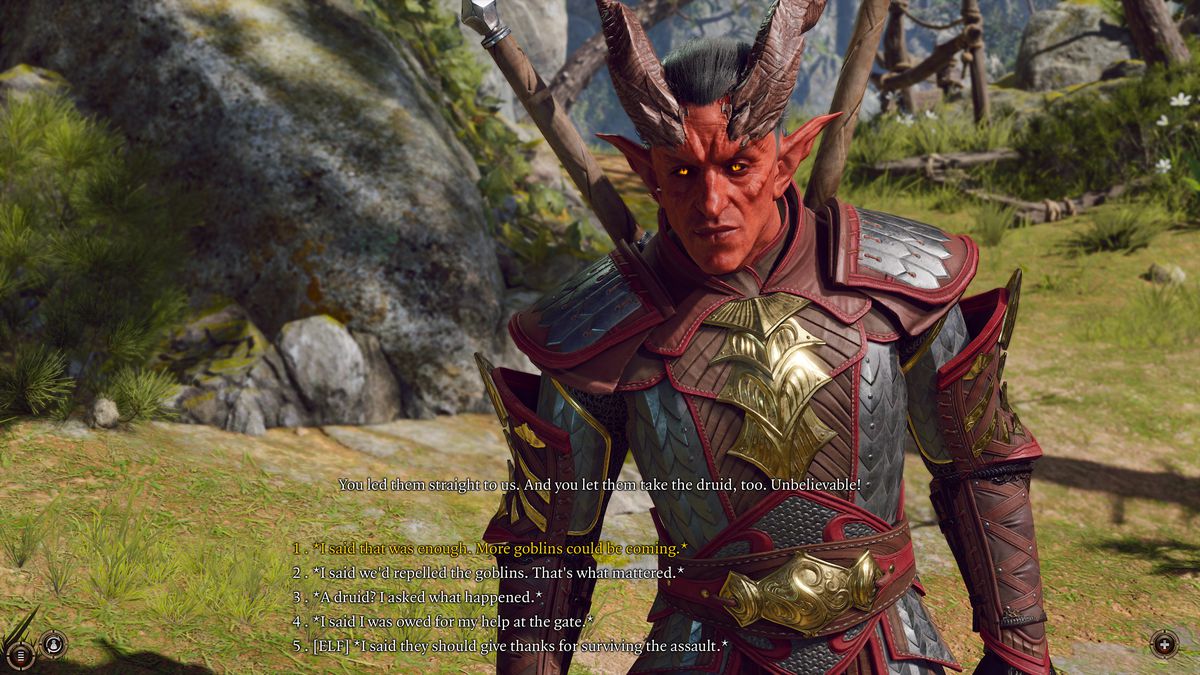 The infusion of the D&D franchise into the Original Sin model is evident in a handful of ways, none of which result in massive gameplay changes.

A sword in Divinity might be listed as dealing 12-18 damage. In Baldur’s Gate 3, that same sword would be listed as, let’s say, 2d6 damage. (That’s D&D-speak for the number you’d get after rolling two six-sided dice.) The result is the same; it’s just presented somewhat differently.

There are other moments in Baldur’s Gate 3 that make the connections to D&D far more explicit, and they offer the largest departures from the Divinity games. Rolling dice is a major element in Baldur’s Gate 3. In Original Sin 2, let’s say you wanted to convince a goblin guard to let you through a gate. All you’d need was the requisite level in your Persuasion skill. The guard requires 4 Persuasion points, and if you have that, congrats, you’ve convinced him!

In Baldur’s Gate 3, you can have a high Persuasion skill, but you’ll still need to roll a 20-sided die to determine whether you’re successful. The higher your skill, the lower the required number on the die. If you’re really charismatic, maybe you’d only need to roll a 3 or higher. The screen will literally show the die as it spins, informing you of your fate, just as it would in a tabletop D&D game.

Sometimes these dice rolls happen passively. A die icon will appear above characters to see if their Perception skill is high enough to notice a poison trap on the ground. Baldur’s Gate 3 will inform you that you’ve failed the check (just as a dungeon master would), but you won’t know what you’re failing to spot or where it happens to be.

Which is to say: Step lightly. 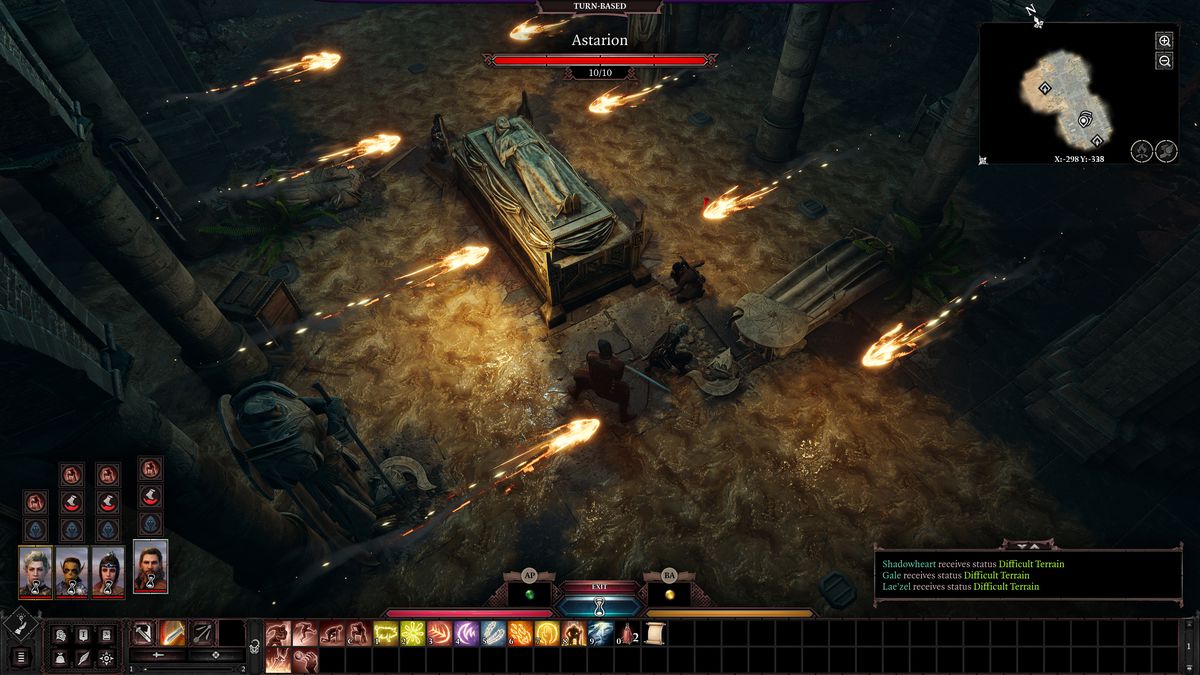 Capturing the freedom of D&D

The magic of tabletop Dungeons & Dragons is just how flexible it is. Want your orcish Bard to try to pull a few cartwheels in the middle of a fight to call attention to herself? You can do that … so long as the dice roll is good enough.

Obviously, in a video game there’s no way to have that level of complete freedom — making up wacky abilities from pure imagination. But Larian’s engine does allow for far more flexibility than computer RPGs of yore. In one instance during the demo, the protagonist of the adventure (a morally questionable vampire spawn) found himself covered with oil in a room with fire arrows shooting in every direction. One wrong step meant a guaranteed fiery death.

Larian’s solution to this problem? The vampire cast a well-known D&D spell called Mage Hand that created a small, ghostly hand minion to hover around the room. The hand wasn’t much of a fighter, but it was able to pick up a nearby box and toss it within range of the vampire’s jump ability, providing a safe, oil-free perch from which to escape the trap.

Unfortunately, the vampire then failed a stability check, slipped off the box into the oil, and died, yes, a fiery death. But hey, noble attempt, right? There are probably a dozen other ways to solve this room and make it out alive, and Larian is letting players use their complete toolkit to get out of scraps in a variety of ways.

As for the many camps of obsessives, it’s hard to imagine any fan of either Divinity or D&D coming away from Baldur’s Gate 3 feeling unfulfilled. D&D’s mechanics are notoriously limitless, and they seem to bolt onto Larian Studios’ existing RPG systems with very little friction. Of course, getting all of these variables to work together into a stable game by the time Baldur’s Gate 3 launches is the real challenge — the demo we saw definitely still had some bugs to work out, which is expected in this stage of development. But if Larian can pull it off, it’ll be a real treat for everyone. Baldur’s Gate 3 is scheduled to be released on Windows PC via Steam Early Access sometime in 2020, and is also coming to Google Stadia.