In Elden Ring, players can use a special item to write messages in the world, which other players connected to the internet can then read. Sometimes they're helpful, pointing out the location of a secret or an ambush ahead. Sometimes (well, most of the time) they're played for laughs. I'd be amazed if you've played the game for any length of time and not seen at least one instance of 'try finger, but hole', a favourite among the shitposters of the Lands Between.

I recently wrote about my hopeless quest to write a highly praised message in Elden Ring, which rewards the author with potentially life-saving health restoration. I noted that my most successful message to date was one I posted in a place called Greyoll's Dragonbarrow, in the deeply miserable realm of Caelid. This is one of the most active places in Elden Ring when it comes to player messages, because it's become a popular spot for rune farming.

Runes are a valuable currency, used for levelling up and buying stuff. Vulgar Militiamen, the monsters who roam this part of Caelid, are dangerous, but susceptible to being stunlocked. This means you can quite easily kill a lot of them in a very short period of time—and each one drops over 1,000 souls when slain. Combine this with the fact that there's a portal in Elden Ring's starting zone leading to their stomping ground, and its popularity is obvious.

This is one of the busiest places in the Lands Between. You constantly see the shimmering outlines of your fellow Tarnished—the visual echoes of other players. They're always crouching, because the easiest way to dispatch the Vulgar Militiamen is sneaking up on them and landing a critical backstab. This lops off a significant chunk of their health, letting you finish them off with a short flurry of weapon strikes before they've even had a chance to fight back.

I know because I spent a stupid amount of time here. Some argue against this, saying it ruins the balance of the game and is essentially cheating. Others (myself included) see no issue with it. If it makes the game more enjoyable, who cares? Those extra few levels made Castle Stormveil, the first major critical path dungeon, a lot more tolerable. However, now that I'm much further in the game, I have runes in abundance and no longer need to grind here. 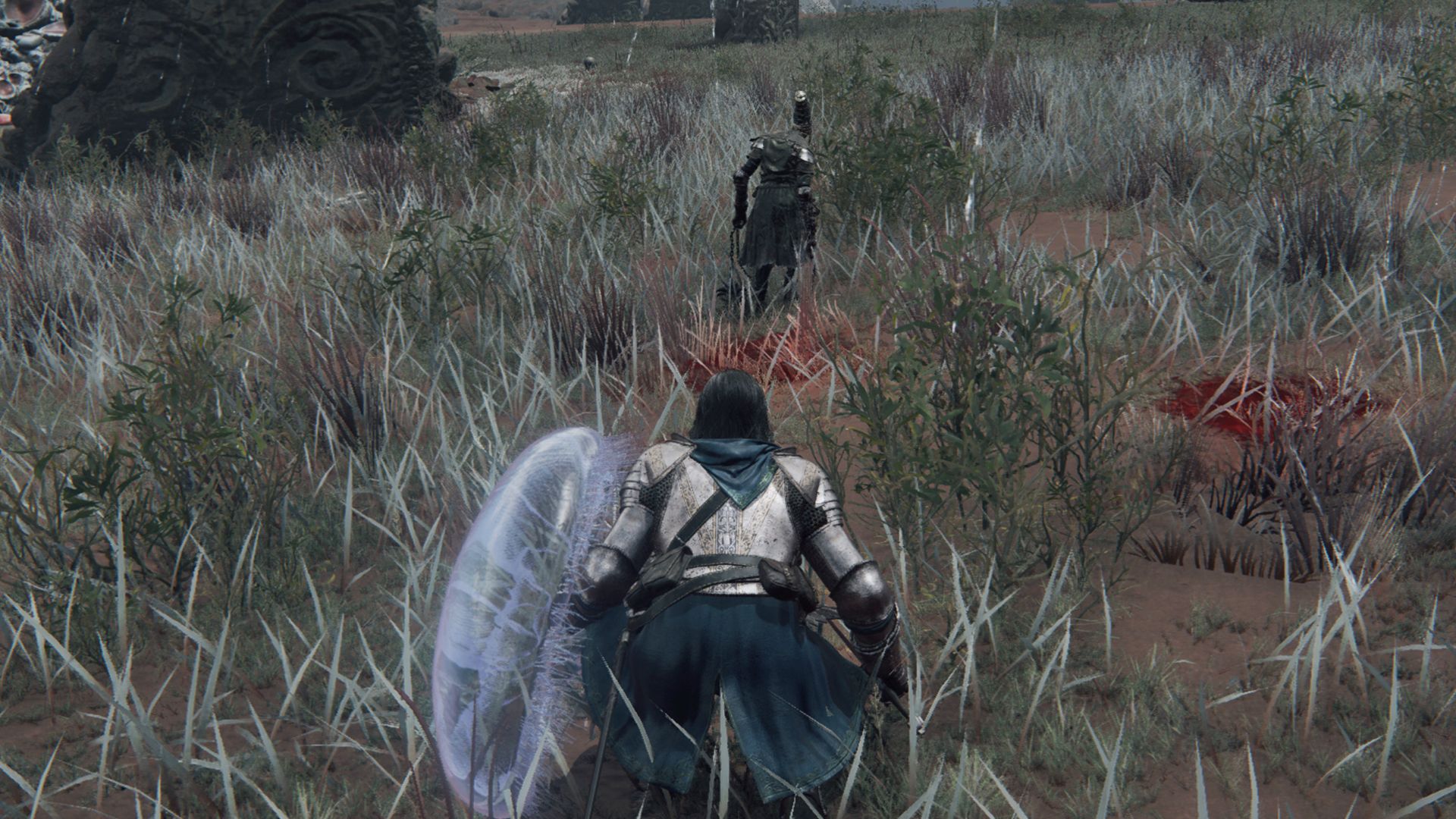 But I still go back occasionally, purely to read the player messages. This debate about whether rune farming is cheating or not isn't just raging on forums and social media—it's happening in the game itself too. As you might expect from somewhere with so much foot traffic, there are a lot of messages littered around these dreary rain-lashed fields. You can't walk more than a few feet without seeing the silver glow of a message inscribed in the ground.

There are a few helpful ones. 'Behold, critical hit', 'Time for stealth', and so on, intended to let unaware players know the most efficient way to farm—and earn the author a few appraisals in the process too, no doubt. There are some celebratory messages, like 'Praise the weak foe!', and a fair amount of existential crises too. 'Ahh, here again' is a common one, and as I'm writing this I've just read one saying 'If only I had a life… but Ahhh, I've failed.'

I love this coming together of players, sharing in the absurdity of spending hours killing the same enemies over and over again. But there are some players who don't take kindly to the hordes of Tarnished coming here early to stock up on, in their eyes, unearned runes. Other common messages found in this zone are 'try skill' or 'seek skill', which is clearly aimed at players the authors think are cheating the system. It's basically 'git gud', but indirectly. 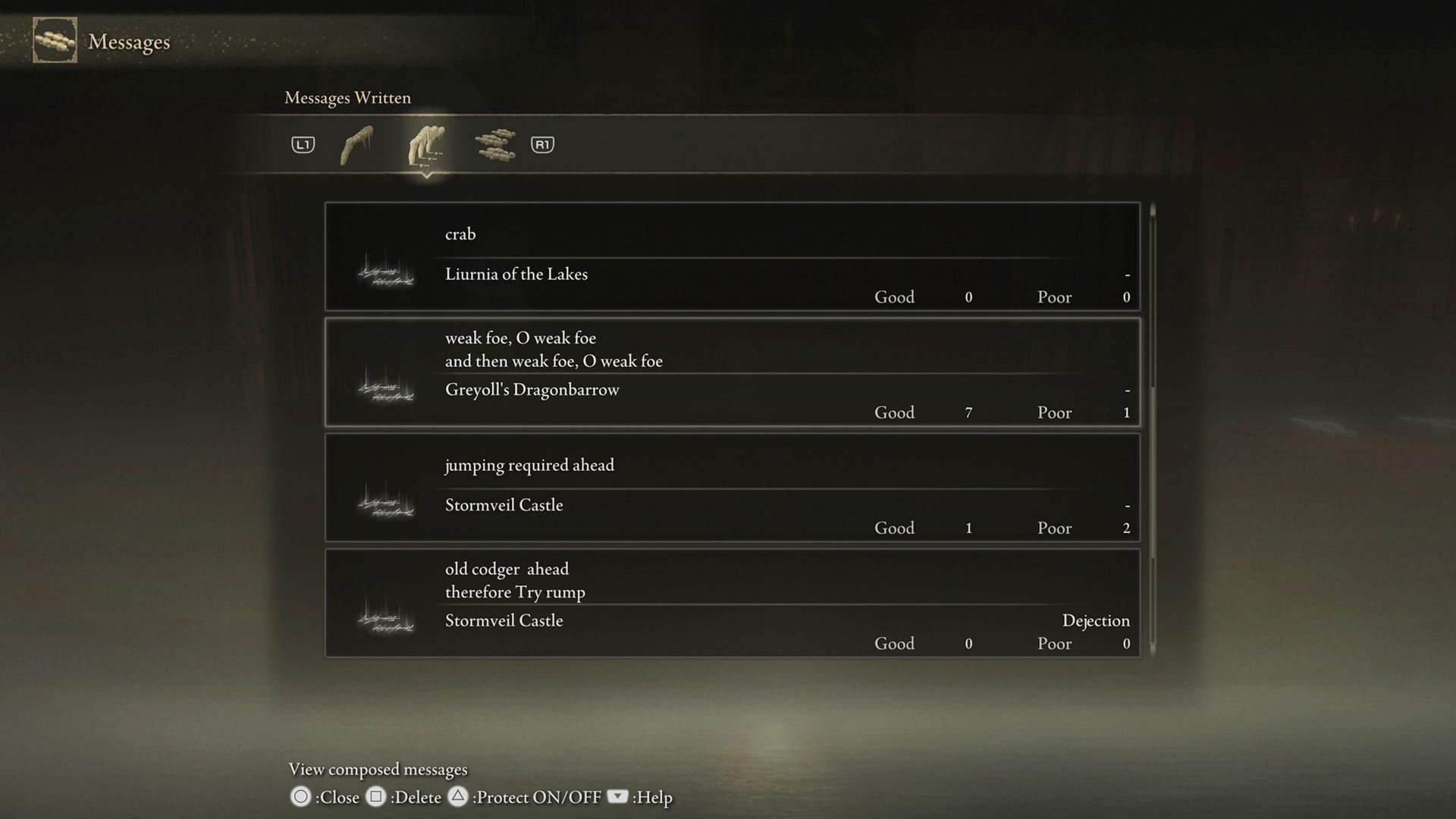 Or, perhaps, a less cynical perspective is that the people leaving these messages are actually trying to help new players. I personally don't think that's the case, but I like the idea that someone out there thinks rune farming is only a short-term solution, and mastering the game's combat is more useful in the long run. Certainly, levelling up can only get you so far. A boss can still wreck you, no matter how many points you pump into your strength stat.

Greyoll's Dragonbarrow is the best example of how players can use Elden Ring's purposefully limited messaging system to communicate with each other. It's become almost like a speaker's corner, with people turning up, debating, and sharing their opposing views—all though strangely worded strings of pre-ordained words and connecting phrases. It's the most elaborate way another player has ever called me a noob in an online video game.