Borderlands 3 getting Cthulhu-themed expansion in March, coming to Steam

At PAX East, Randy Pitchford and Gearbox Software announced the future of Borderlands 3 — including a full reveal of the game’s second DLC: Guns, Love, and Tentacles.

Guns, Love, and Tentacles will feature the in-game wedding of gun mogul Wainwright Jakobs and eccentric hunter Sir Hammerlock. But as Borderlands 3 players prepare to attend the wedding, the town of Cursehaven sees an invasion of Cthulhu-like monsters. Players will team up with Jakobs, Hammerlock, and Gaige (the Mechromancer from Borderlands 2) to save the couple’s nuptials from a fanatical cult. 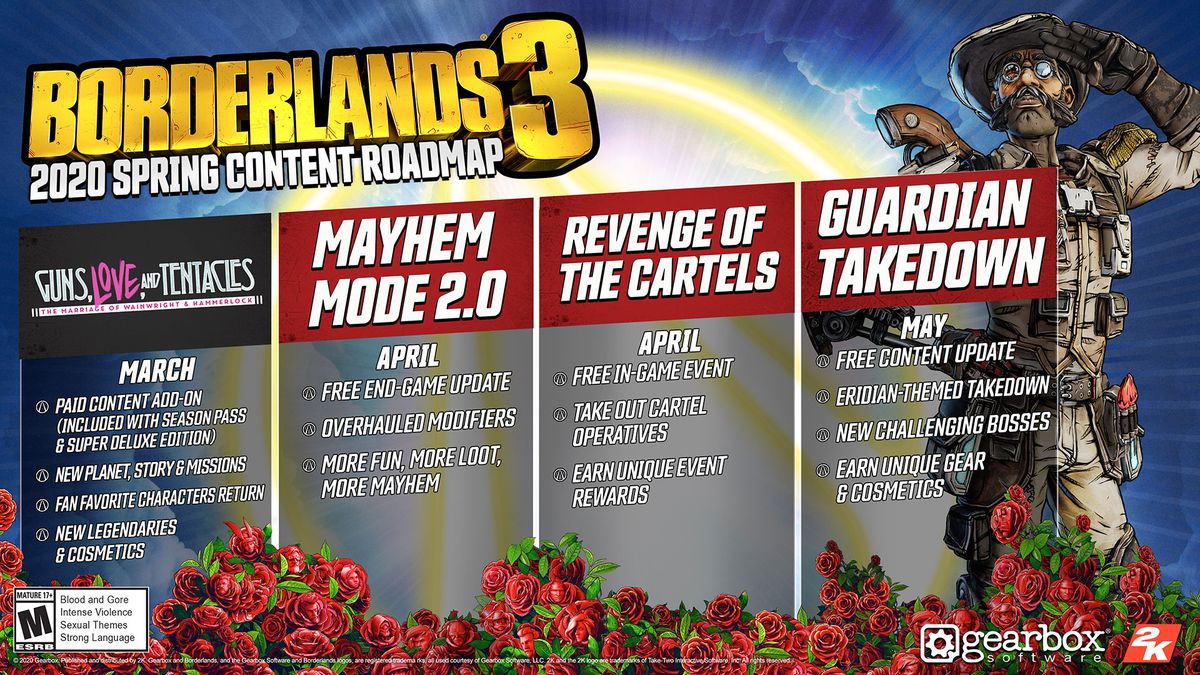 Guns, Love, and Tentacles will feature all the content Borderlands fans have come to expect with new expansions, such as new bosses, new class mods, and powerful guns. The new expansion is the second DLC offering in Borderlands 3’s season pass, alongside Moxxi’s Heist of the Handsome Jackpot from December 2019, and two still-unannounced expansions.

Gearbox Software will release Guns, Love, and Tentacles on March 26. Players can bypass the main Borderlands 3 story and head straight to the new planet of Xylourgos to start the new expansion.

During the presentation, Pitchford also offered some details on DLC 3 and DLC 4. The team is currently working on DLC 3, which looks to have a western theme (the roadmap describes it as “outlaws and dinosaurs”). While Pitchford claimed DLC 4 may still change, he revealed that players will delve into the head of “our favorite Psycho” — likely talking about the player -character Krieg from Borderlands 2. Players can buy the Season Pass for $49.99. The pass is currently on sale for $39.99 on the PlayStation store.

On March 13, Borderlands 3 will finally come to Steam (the PC version was previously exclusive to the Epic Games Store). At launch, the title will feature crossplay between Steam and the Epic Games Store. At a later date, Gearbox will add functionality to allow players to mail guns across platforms, as well as some unannounced features.