Home » PC » World of Horror lets me bring doom upon myself

World of Horror lets me bring doom upon myself

Choose-your-own-adventure stories always have an early option to avoid the adventure entirely, where I don’t go to the haunted circus, or I don’t take the spooky cursed book hiding on a dusty shelf. As a kid, I would dutifully stick my finger in place and then flip to this false ending — usually a glib “you live to a very old, boring age, are you happy?” — and then gleefully turn back to the horrors that awaited me.

World of Horror, a horror RPG with retro styles recently released in early access on Steam, captures too well the part of me that was desperate to go to the haunted circus and read that cursed book. Players are given horrifying mysteries to chase, like a contagious coma or a mysterious woman cutting people’s faces, but these function more as loose frameworks in which to have individual terrifying encounters. From creepy kitchens and classrooms to eerie people asking for help, these encounters come with options on how to respond. And for the life of me, I couldn’t resist choosing the worst choice possible. 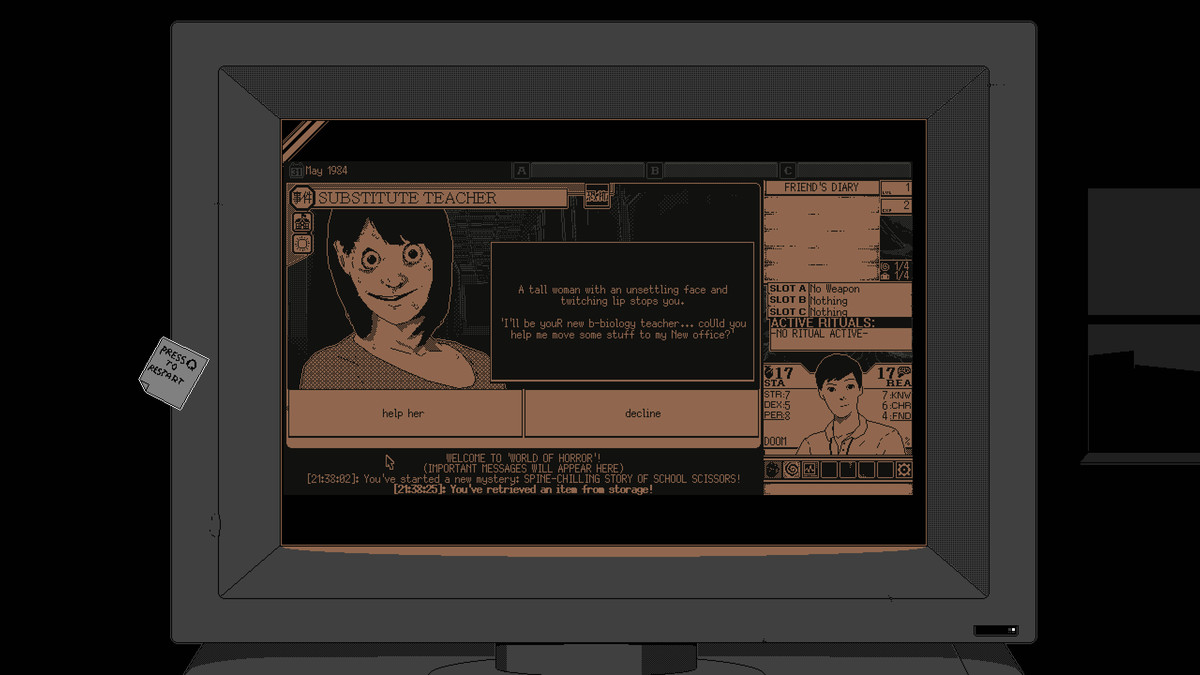 What am I going to do, NOT help her?
Image: panstasz/Ysbryd Games

This is not because I lack survival instinct, but a testament to how engaging the horror is in World of Horror. Enemies skitter and glitch-twitch unnervingly as you battle them. Giant gods hover over you, likely to destroy you without even noticing. At one point, I click-and-dragged a sliding school door open — for a half second, I see a half-melted face but before I can really understand what I’m seeing, the door slams shut again; I don’t want to go that way.

The game is still in early access, and there are clearly some rough edges and bugs. These range from minor text errors (all of the shopkeepers says “woof!”, even though only one is a dog) to larger game-crashing issues. Despite this, the gameplay has surprising depth and complexity. The overarching strategy is focused on managing your very limited stamina and reason, while keeping an eye on the ever-increasing doom level. There is no shortage of random encounters that will tick away at these stats, from exploration to puzzles to battles. While searching for gossip in the schoolyard, I was able to recruit an ally who made me a little more lucky — although this didn’t save me from blacking out in a hospital elevator after being startled by some many-tentacled monster. Even browsing the wares at a shop will increase the doom level, so you better have enough funds to buy something good.

Although the doom mechanic may be familiar to fans of games based on H.P. Lovecraft’s works, World of Horror is more strongly influenced by Japanese horror comics, especially the oeuvre of Junji Ito. Even if that name isn’t familiar, you might be familiar with his short comic “The Enigma of the Amigara Fault”, which has circulated around online a few times since its publishing.

While “Amigara Fault” is Ito at his finest storytelling, but nowhere near his creepiest. World of Horror mines his full body of work, with images that call back to the seaside town beset by spirals in Uzumaki and the hovering eye-planet of Hellstar Remina, while also referencing earlier pioneering horror manga like Kazuo Umezu’s The Drifting Classroom. But even without the grounding in Japanese horror classics, World of Horror pays off with its own immensely creepy animations and monster designs.

The sparse, 1-bit style doesn’t lack for expressiveness or spookiness, with lovingly drawn monsters and unexpected visual details that add a lot of depth. In one battle, a scissor-wielding woman slashed at my face, giving me a long cut up my cheek, which became permanently visible on my character portrait. At another point, I had to match up two sigils to form the right symbol to complete a ritual. Although the shapes were drawn with relative simplicity, it was tricky to match the overlapping images, making it a fun and effective puzzle. 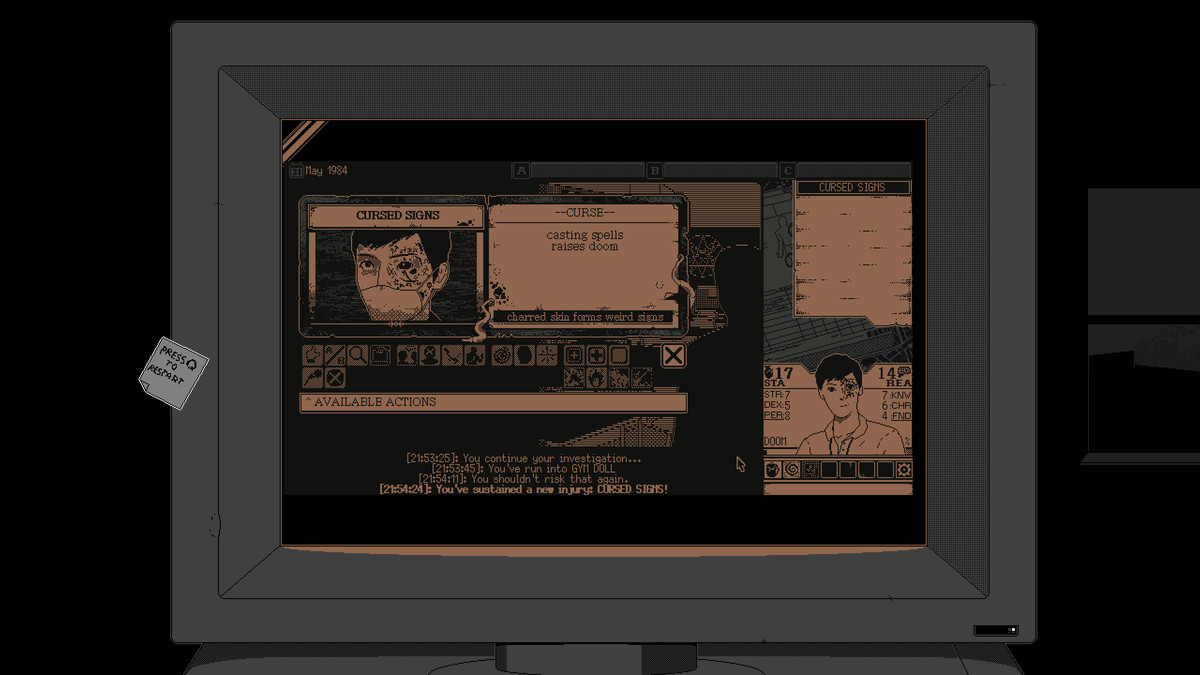 Rest assured, it was entirely my fault that I got cursed.
Image: panstasz/Ysbryd Games

Retro games can struggle between staying true to the aesthetic of the homage and taking advantage of the improvements modern gaming have forged; World of Horror mostly falls on the right side of this divide. Upon starting a game, you can chose from a variety of color palettes, which provided a huge relief from the brightness of the white default interface (especially since I insist on playing horror games in the dark, huddled under a blanket — I always pursue the worst horror option in real life and in horror media).

However, the lack of texture and color, and the overall density of information on screen, can sometimes make it difficult to parse the interface. The amount of on-screen boxes and options can be overwhelming, especially given how many of them contain critical information. From a tense, horror-game perspective this adds an interesting layer of anxiety that aids in atmosphere building. From a straight gameplay-parsing standpoint, it can be frustrating to flip through a dozen options marked with opaque eldritch icons just to find your spell list.

This is especially difficult in combat; there’s no strong indicator of when the enemy had finished attacking, leaving me waiting without realizing it was already back to me. Every action during a battle has a time value, and there are over a dozen different actions you can choose from, each marked with a quasi-useful icon. Hovering over the icon gives the time value and purpose of each, but this was frustratingly slow, and I ended up picking a relatively efficient set of actions to do every turn. Inputting these sequences became a little rote, which is not how you want to feel in any game, and especially not in a horror game.

As mixed as the visuals are, I was more often struck by the thoughtful gameplay implementation of familiar monsters and tropes. After I fought a Hole-Ridden Thing, a creature that looks as upsetting as you might imagine, I found I had contracted a mysterious disease. It took some digging through some menus to find a description of this status effect, but it paid off; the creature had infected me with Holes, and every day more appeared, lowering my already-sparse stamina.

Clearly I didn’t need to chase frightening encounters as much as I did, but that didn’t stop me. In my last encounter before dying at the hands of a mask-wearing maniac, I found myself in a kitchen with three options: search for a health kit, search for a weapon, or check the foul-smelling pot of liquid bubbling on the stove. As you might predict, I chose the worst possible option, and was rewarded with a face full of noxious steam from a grotesque stew. Although I lost yet more stamina, I gained an experience that was terrifyingly and uniquely World of Horror.