Rainbow Six Siege may be a multiplayer-only game, but it has a canon, too, just like another multiplayer-only first-person shooter. If you’re familiar with your character icons, one fan whipped up a chart to explain how all the Operators get along or, in many cases, don’t.

Redditor Spirit_of_Stupid (who, like me, mains Recruit) delivered this map yesterday (full size version at bottom). If nothing else, it’s fun to trace the lines (assuming you care about Siege, of course) and see that, yep, Thatcher’s friends with the most Operators, probably owing to a biography that has him in a mentoring role to newcomers.

Then there’s Mira, who is the only one who hates Warden (who evidently keeps bothering Mira for a new look for his glasses gadget). And Ash has beef with a lot of Operators, but not fellow American Castle, who is also Rainbow’s peacemaker.

The chart takes its info from the official biographies on Ubisoft’s Rainbow Six Siege site as well as the Fandom.com wiki. In the comments, fans expounded on what all of this really means, coming up with Ash, Valkyrie and Montagne in tactical leadership roles, given their all-bidness approaches that leave little time for pleasantries.

Rainbow Six Seige’s two newest operators, Oryx and Iana, are even on the chart, a week after being introduced. They’ve been on the game’s public test server (on PC) since Monday. The launch date for Year 5 Season 1 hasn’t been finalized, but with things on the PTS most folks expect that in a couple of weeks or so. 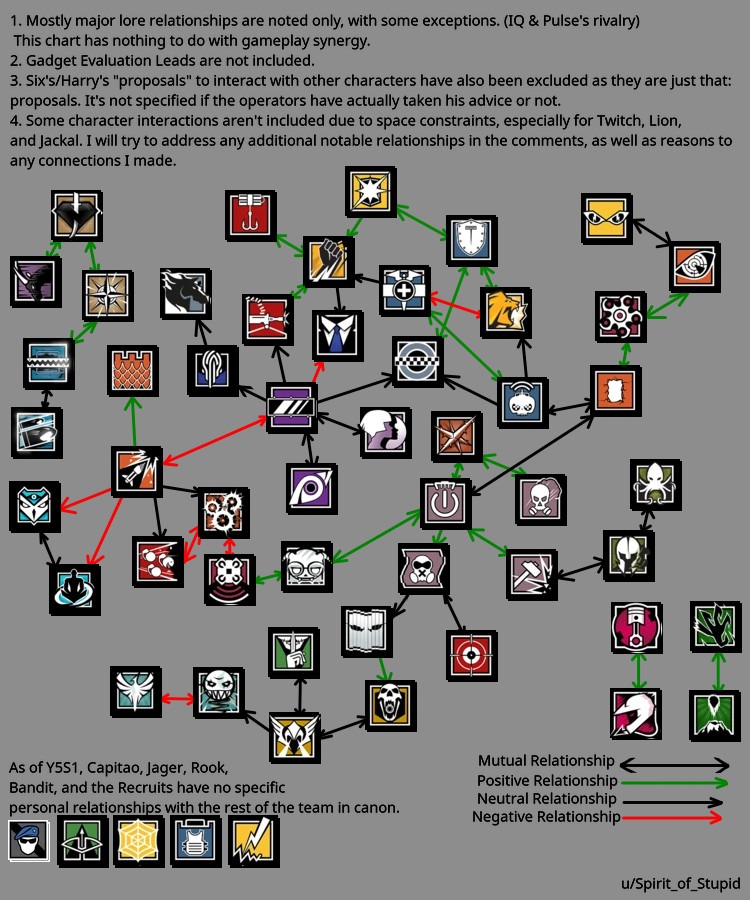