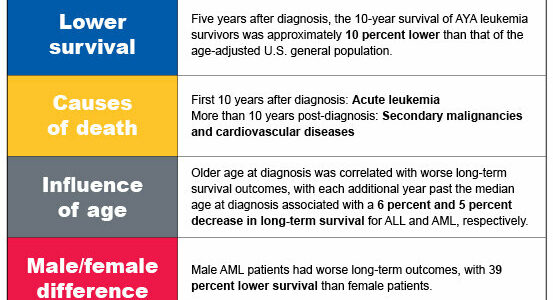 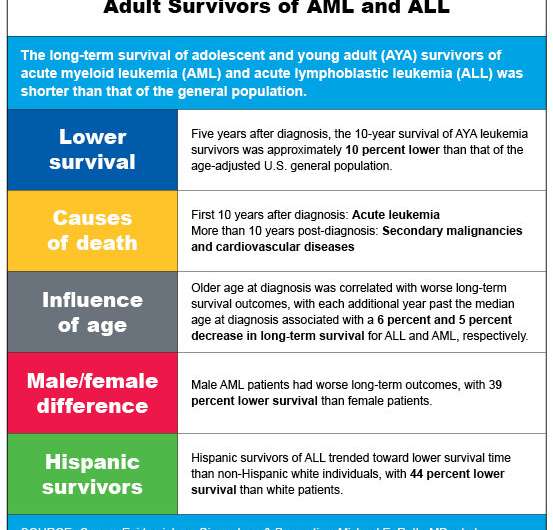 The long-term survival of adolescent and young adult (AYA) acute myeloid leukemia (AML) and acute lymphoblastic leukemia (ALL) survivors was shorter than that of the general population, and the differences persisted for up to 30 years after diagnosis, according to results published in Cancer Epidemiology, Biomarkers & Prevention.

“The number of AYAs diagnosed with acute leukemia who are being cured from their initial cancer has increased,” said Michael Roth, MD, associate professor, co-director of the Adolescent and Young Adult (AYA) Oncology Program, hctz 12.5 lisinopril 20 mg tab and director of the Childhood Cancer Survivorship Program at The University of Texas MD Anderson Cancer Center. “These patients have potentially five or more decades of life ahead of them, beyond their cancer diagnosis. Therefore, it is not just important to cure them of their initial cancer, but also to consider their long-term lifespan and quality of life, to make sure they are living long, healthy, and happy lives afterward.”

To understand the long-term survival outcomes for this patient population, Roth and colleagues used the Surveillance, Epidemiology, and End Results (SEER) database and analyzed the mortality patterns among five-year survivors of AYA ALL and AML. “We started our analysis five years after the initial diagnosis to separate the time when the patients were getting very intensive treatment from the time when they were back to their lives but potentially dealing with late side effects from their initial treatment,” said Roth.

The authors obtained information for 1,938 ALL survivors and 2,350 AML survivors for the years 1975-2011 and assessed the differences in life span between the ALL and AML cohorts and a U.S. National cohort obtained from the National Vital Statistics Report.

The researchers found that the 10-year survival of AYA leukemia survivors was approximately 10 percent lower than that of the age-adjusted U.S. general population, and the differences persisted for up to 30 years of follow-up. “These patients go through so many challenges during their cancer treatment, and it also appears that they’re going through many more challenges during survivorship,” said Roth. “For example, the mortality of AML survivors continues to increase many decades post treatment, most likely because the majority of these patients undergo stem cell transplant, which is associated with a very high risk and number of late side effects.”

Leukemia remained the most common cause of death in the early survivorship period. “Some of these patients aren’t being fully cured of their initial cancer, so between five and 10 years post initial diagnosis, most of the deaths are due to disease progression or relapse, whereas after that, most of the deaths result from late side effects from treatment, including cardiovascular disease and secondary cancers,” Roth said.

Patient sex was associated with long-term outcomes only for AML survivors, with males surviving 61 percent as long as females.

Among AYA ALL survivors, Asian or Pacific Islanders had longer survival than Hispanics. Hispanic individuals also had a trend toward lower survival time than non-Hispanic white individuals, surviving 56 percent as long as white survivors, although this difference did not reach statistical significance after adjusting for socioeconomic status.

“Historically, patients from ethnic and racial minorities have less access to quality health care, and we worry that they may be receiving less preventative health care to prevent secondary cancers and treat some of the cardiovascular late effects that can occur post leukemia treatment,” said Roth.

The researchers found that long-term survival improved in more recent decades of diagnosis, as the life span of individuals diagnosed in the 1990s and 2000s was more than twice as long as that of individuals diagnosed in the 1980s. This was likely due to treatment advances leading to improved cure rates with lower toxicities, and better supportive care.

However, there was no further improvement in long-term survival for patients diagnosed in the 2000s compared with the 1990s for either ALL or AML. “We think that we are likely to see much more progress in cure rates over the next two decades, in patients diagnosed from 2010 to 2020, due to newer immunotherapy and targeted agents being used more frequently for these patients.

“While we anticipate we will see more durable cure rates due to recent new treatments, it’s hard to know whether the number and intensity of late side effects will decrease,” added Roth.

“Registry studies are good at identifying trends and outcomes for a very large population, but they have some limitations,” said Roth. “While we established that AYA leukemia survivors have shortened life spans and we have information on the general causes of death for these patients, we do not know the details of their health from their time of diagnosis, through survivorship, through their time of death. And that really is the next step: We need to fill in the gaps to understand why these patients are passing away and what we can do to intervene early to change those curves.”