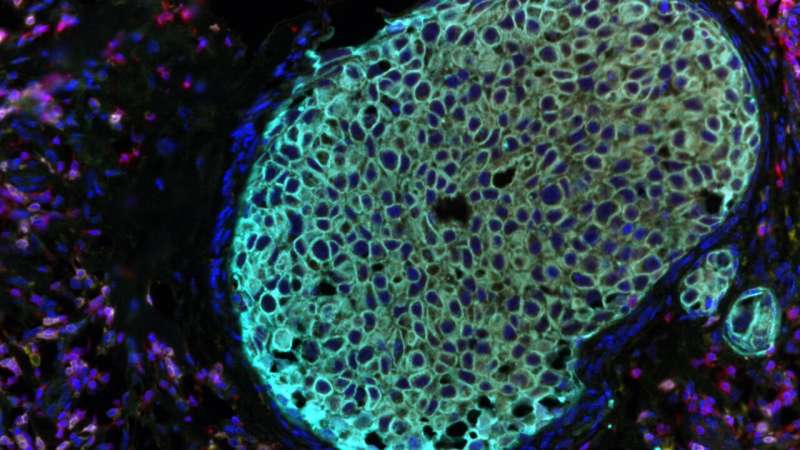 A new study led by the global Cancer Grand Challenges PRECISION team, including researchers from The University of Texas MD Anderson Cancer Center, shifts the long-held belief that all invasive breast cancers following ductal carcinoma in situ (DCIS) arise from the original DCIS lesion. The results, published today in Nature Genetics, demonstrate that roughly one in five invasive cancers were genetically unrelated to the original DCIS.

The findings provide a deeper understanding of the biology of DCIS, serving as a foundation for future studies to better identify cases of DCIS most likely to progress and to determine appropriate intervention strategies for women with DCIS.

“By analyzing the largest DCIS cohort of its kind in the world, we discovered that a subset of invasive breast cancers following an initial DCIS are not related to the primary DCIS, urso azul do tibet ” said co-lead author Tapsi Kumar, Ph.D., graduate student in Genetics. “This data challenges our prior understanding of DCIS progression and gives us a starting point to identify better predictive biomarkers to determine which DCIS lesions are most likely to progress to invasive cancer.”

DCIS, which indicates the presence of abnormal cells inside the breast milk duct, is the most common form of pre-invasive breast cancer. The condition is harmless in most; less than 10% of women with DCIS will later develop an invasive cancer.

Because it’s currently hard to predict which cases of DCIS will progress, treatment is recommended for most cases to prevent the development of invasive cancer. Therefore, most patients diagnosed with DCIS are treated with some combination of surgery, radiation and hormone therapy that will ultimately provide little benefit.

The Cancer Grand Challenges PRECISION team was established to develop better tools to distinguish between high- and low-risk DCIS and thus avoid overtreatment for many women. Together with Kumar, the work at MD Anderson was led by Nicholas Navin, Ph.D., professor of Genetics and Bioinformatics & Computational Biology, and Andy Futreal, Ph.D., chair of Genomic Medicine. Kumar is a member of both the Navin laboratory and Futreal laboratory.

This study was designed to determine whether subsequent invasive breast cancers are, in fact, connected to the original DCIS. Because there are relatively few women with DCIS who later develop invasive cancer, obtaining samples for this study was a challenge. Through the global collaboration, the team was able to pool and analyze 95 pairs of samples from women who had DCIS, were treated and later developed invasive cancer in the same breast.

The researchers performed genomic sequencing on all samples, including single-cell DNA sequencing on a subset, to compare mutations and copy number changes between the DCIS and invasive cancer.

The combined results of these analyses revealed that 75% of paired samples were indeed related, meaning they shared the same genetic abnormalities and the invasive cancer developed from the DCIS lesion.

However, the researchers also discovered that 18% of the paired samples were unrelated, suggesting the invasive cancer later developed independently of the original DCIS lesion. A final 7% of samples had ambiguous results, and researchers were not able to clarify a relationship.

These findings demonstrate that around one in five cases of invasive cancer following DCIS are not true recurrences, but instead represent new cancers. These results may explain why it has remained difficult for researchers to identify biomarkers that accurately predict the risk of DCIS recurrence. Future studies will build upon these findings to discover risk factors for women with DCIS likely to develop either a recurrence or a new cancer.