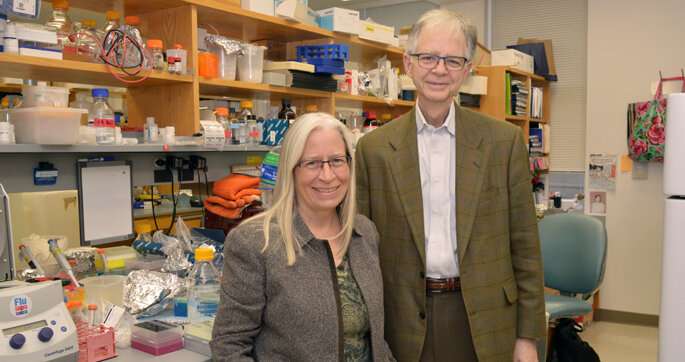 Researchers at Vanderbilt University Medical Center have discovered a potential new target in the fight against colorectal cancer, the nation’s third most common malignancy and, next to lung cancer, the second leading cancer killer.

This month in the journal Gastroenterology, pregabalin essential tremor R. Daniel Beauchamp, MD, Anna Means, Ph.D., and colleagues report that a cell-signaling protein/chemokine called CCL20 and its receptor, CCR6, are essential to the growth of colorectal tumors following the loss of a tumor suppressor protein, SMAD4.

This alphabet soup of proteins appears to hold a key to identifying and ultimately interrupting the complex, multicellular events that spur malignant growth in the colon.

SMAD4 is part of the transforming growth factor beta (TGF-beta) signaling pathway that regulates the immune/inflammatory response to infection in the epithelial cells that line the colon.

Chronic inflammation, including inflammatory bowel disease, is a predisposing condition for colorectal cancer.

Previous work in the Beauchamp lab has demonstrated that SMAD4 blocks or represses the effects of pro-inflammatory cytokines in the colonic epithelium, and that loss of SMAD4 or inhibition of TGF-beta receptors in a mouse model increases levels of the chemokine CCL20.

“This current work links the upregulation of CCL20/CCR6 signaling after loss of SMAD4 to the inflammatory microenvironment that promotes colon cancers, particularly in inflammatory conditions such as ulcerative colitis in humans,” he said.

In humans, CCL20 is upregulated in ulcerative colitis and Crohn’s disease, and elevated in sporadic colorectal adenomas (polyps) and colorectal cancer, suggesting that it may influence cancer susceptibility.

Using a mouse model they developed, in which the Smad4 gene has been deleted in the colon, they linked the function of SMAD4 in the epithelium to the regulation of CCL20/CCR6 signaling. The tumor burden in mice lacking SMAD4 also was reduced when the Ccr6 gene was deleted.

These findings suggest that loss of SMAD4 in the colon epithelium increases CCL20 expression and chemoattraction of CCR6-positive immune cells, contributing to greater susceptibility to colon cancer.

“This is a great example of taking a clinical problem to the lab, uncovering regulatory events, and identifying targets that can then be taken back to the clinic,” said Means, research professor of Surgery and Cell & Developmental Biology.

“We were able to mutate the tumor suppressor gene, Smad4, in a mouse model and do the kinds of analyses that are not possible in people,” she said. “These analyses allowed us to determine which of the many cell-cell interactions was critical for tumor progression and can be tested for clinical efficacy in future studies.”