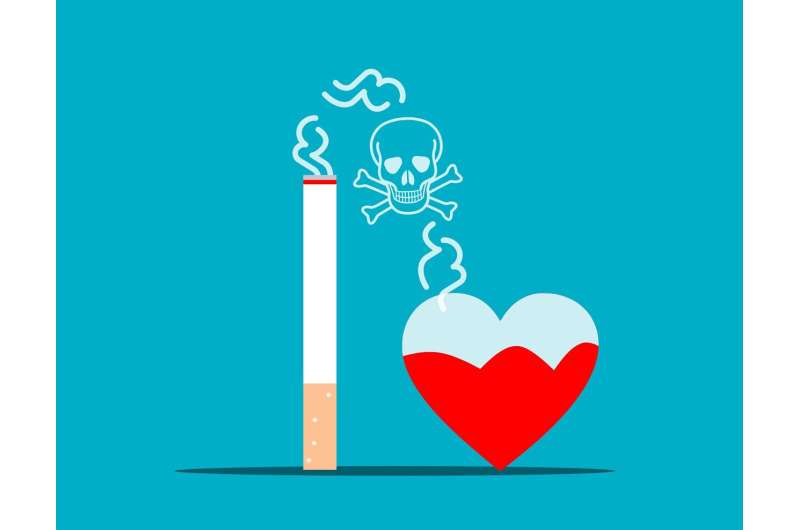 A new study from researchers at the Johns Hopkins Bloomberg School of Public Health found that people who smoked tobacco cigarettes developed heart failure at twice the rate of those who never smoked. This higher rate occurred in two major heart failure subtypes and confirms that cigarette smoking presents a significant risk factor for both.

For their study, the researchers analyzed records from a long-running study of nearly 9,500 individuals in four U.S communities. The study found that participants who had stopped smoking retained a significantly increased risk of either type of heart failure for decades after they’d stopped smoking.

The study was published online June 6 in the Journal of the American College of Cardiology.

“These findings underline the importance of preventing smoking in the first place, soma 350 mg get high especially among children and young adults.” says study senior author Kunihiro Matsushita, MD, Ph.D., associate professor in the Bloomberg School’s Department of Epidemiology. “We hope our results will encourage current smokers to quit sooner rather than later, since the harm of smoking can last for as many as three decades.”

Heart failure is a progressive condition in which the heart loses its ability to pump enough blood to meet the body’s needs. It’s one of the most common causes of disability and death in developed countries, with more than 6 million adults living with heart failure in the U.S. alone, according to the Centers for Disease Control and Prevention most recent data. Besides cigarette smoking, risk factors for heart failure include obesity, hypertension, diabetes, coronary artery disease, and advanced age.

Matsushita and colleagues evaluated health records of participants in the Atherosclerosis Risk In Communities (ARIC) study. Launched in 1987, the ARIC study includes middle-aged and older adults across the U.S., with substantial representation of Black individuals. The new study’s analysis included data from four communities in Maryland, North Carolina, Minnesota, and Mississippi, and focused on 9,345 ARIC participants, ages 61 to 81, who had sufficient records and no diagnosis of heart failure as of the start of 2005.

The link with smoking also showed a “dose-response” relationship—more cigarettes per day and more years of smoking being associated with higher heart failure risk. Similarly, quitting smoking brought a drop in heart failure risk that increased over time. Overall, former smokers were 31% and 36% more likely to have preserved ejection fraction and reduced ejection fraction, respectively, compared to never-smokers.

When the researchers stratified former smokers by the number of years since quitting, they found that their overall heart failure risk remained significantly higher than never-smokers’ risk—except for the group that hadn’t smoked for 30 years or more.