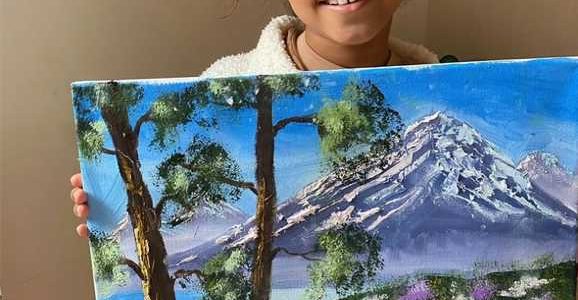 Kim Kardashian West is one proud mom — and she's not afraid to stick up for her children.

The Keeping Up with the Kardashians star, 40, recently shared a photo of a landscape painting her daughter North had completed, calling the 7-year-old a "little artist" in an Instagram Story post.

However, social media users quickly began questioning whether or not North had actually painted the artwork, which was done in a style similar to the works of Bob Ross.

"i'm supposed to go but i can't stop thinking about how north west did not paint this," wrote one Twitter user, whose message was later shared on Kardashian West's Instagram Story with the username blocked out.

"DON'T PLAY WITH ME WHEN IT COMES TO MY CHILDREN!!!" Kardashian West wrote in a lengthy post. "My daughter and her best friend have been taking a serious oil painting class where their talents and creativity are being encouraged and nurtured."

"North worked incredibly hard on her painting with took several weeks to complete, where to buy generic lipitor coupons without prescription " she continued. "As a proud mom, I wanted to share her work with everyone." In her statement, the SKIMS designer called out the "grown adults breaking down whether or not my child actually painted this."

"How dare you see children doing awesome things and then try to accuse them of NOT being awesome?" Kardashian West wrote. "Please stop embarrassing yourselves with the negativity and allow every child to be GREAT!"

The mother of four — who shares daughters North and Chicago, 3, and sons Saint, 5, and Psalm, 21 months, with husband Kanye West — also posted a similar-looking landscape painting her daughter's friend had done.

"They go to the same art class!!!" Kardashian West wrote, adding in another post, "Shout out to all the proud moms out there that love to show their baby's masterpieces." The KKW Beauty mogul went on to share drawings that West, 43, had done when he was young.

"Throwback to some of her dad's artwork that he did when he was a kid," she captioned a series of sketches.

Close family friend Tracy Romulus — whose daughter Ryan is friends with North — also defended the artwork, sharing that both girls are "learning oil painting techniques from an instructor."

"They spend weeks at a time on a single painting and are incredibly proud of themselves once they complete a project," she wrote on her Instagram Story. "They are following a curriculum but the works are original, starting from a blank canvas and each child's interpretation." This was not the first time Kardashian West addressed accusations that North had copied someone else's work.

In March, when North sang at her dad's Yeezy fashion show, several social media users pointed out that her performance sounded similar to "What I Do?" by young internet sensation ZaZa.

Following the show, Kardashian West sent a message to ZaZa's parents explaining that her daughter "didn't mean to not give credit where credit was due."

"We love you, North is a huge fan and records in the studio all the time with her dad and is inspired by ZaZa and loves Lay Lay too!" she wrote on Instagram. "Todays performance of North's remix of ZaZa's song was something she asked to do at the last minute and a complete surprise."

"I'm so proud of my Northie!!!!!! Her 1st performance had me in tears!" the mom later tweeted. "She had an impromptu performance on stage at her dads Yeezy Season 8 fashion show! Shout out to Zaza!!!"