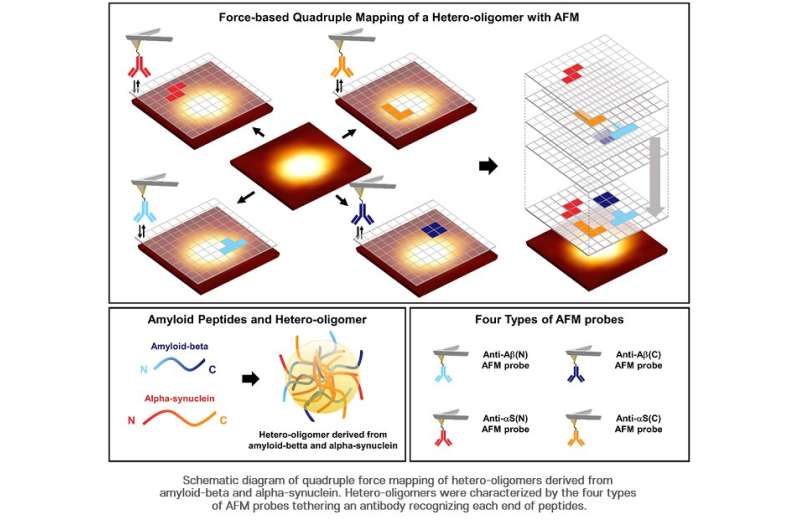 Alzheimer’s disease—also called dementia—where memory and cognitive functions gradually decline due to deformation and death of neurons, and Parkinson’s disease, that causes tremors in hands and arms impeding normal movement—are major neurodegenerative diseases. Recently, a research team at POSTECH has identified the structure of the agent that causes Alzheimer’s and Parkinson’s diseases to occur together.

A research team led by Professor Joon Won Park and Ph.D. candidate Eun Ji Shin of the Department of Chemistry at POSTECH investigated the surface structure of hetero-oligomers found in the overlap of Alzheimer’s disease and Parkinson’s disease, using an atomic force microscopy (AFM) to reveal their structural identity. This study was featured as the front cover paper in the latest issue of Nano Letters.

It is known that the pathological overlap of Alzheimer’s disease and Parkinson’s disease is associated with the formation of hetero-oligomers derived from amyloid-beta and alpha-synuclein. However, it was difficult to study the treatment due to technical limitations in observing their structure.

This study is the first study to observe the structure of protein disordered nano-aggregates, which has never been identified before, using the quadruple mapping with four AFM tips. It serves as experimental grounds to verify the hypothesis of hetero-oligomer aggregation. It can also be used in studies related to the overlapping phenomena of various neurodegenerative diseases other than Alzheimer’s and Parkinson’s.