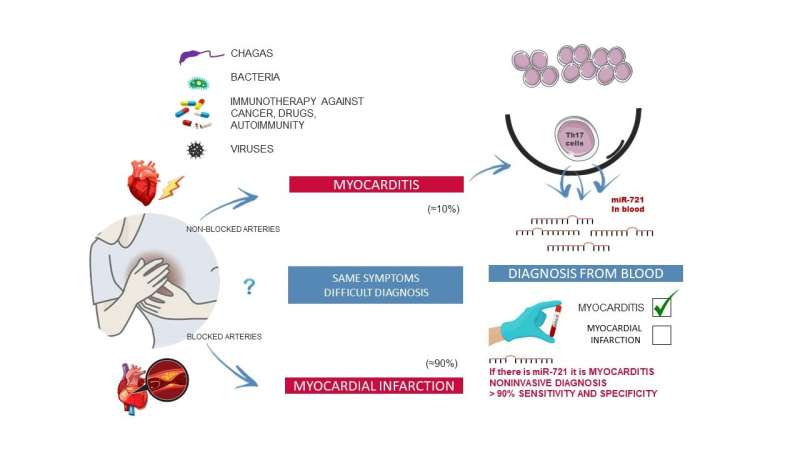 Scientists at the Centro Nacional de Investigaciones Cardiovasculares (CNIC) have identified the first blood biomarker for myocarditis, a cardiac disease that is often misdiagnosed as myocardial infarction. Nevertheless, the diagnosis of myocarditis continues to be challenging in clinical practice.

The study, led by Dr. Pilar Martín and published today in The New England Journal of Medicine, has detected the presence of the human homolog of micro RNA miR-721 in the blood of myocarditis patients.

CNIC General Director Dr. Valentín Fuster emphasizes that these results of paramount importance because they establish the first validated blood marker with high sensitivity and specificity (>90%) for myocarditis. This will allow clinicians to distinguish between this disease and other cardiomyopathies like acute myocardial infarction, myocardial infarction with nonobstructive coronary arteries (MINOCA), and other inflammatory diseases with an autoimmune origin.

“Our finding has great potential as a valuable clinical tool for the precise and noninvasive diagnosis of myocarditis from small drops of blood,” says Dr. Martín, side effects for crestor whose project is funded by a Fundación BBVA Beca Leonardo award.

An inflammatory disease of the heart

Myocarditis is an inflammatory disease of the heart caused by infection, toxins, drugs, or autoimmune disorders. If untreated, myocarditis can progress to potentially fatal dilated cardiomyopathy, requiring heart transplant.

The prevalence of myocarditis remains uncertain because it is often difficult to achieve a confirmed diagnosis.

Myocarditis, says study co-first author Rafael Blanco-Domínguez, “is often the final diagnosis in patients with MINOCA, which accounts for 10 to 20 percent of patients meeting the criteria for myocardial infarction.”

However, not all centers have access to MRI technology, and the current gold standard for myocarditis diagnosis is endomyocardial biopsy, an invasive procedure normally reserved for severe cases. There is thus a pressing clinical need for the development of reliable and accessible tools for the early diagnosis of acute myocarditis.

Moreover, adds Raquel Sánchez-Díaz, “Myocarditis is a side effect that, although very rare, is potentially serious in cancer patients who are receiving treatment with immunotherapy drugs called immune checkpoint inhibitors.”

There are currently no specific markers for the diagnosis of patients susceptible to developing myocarditis during cancer immunotherapy.

“We identified miR-721 in the blood plasma of mice with autoimmune or viral myocarditis. This miRNA is produced by autoimmune Th17 cells that recognize cardiac antigens derived from proteins such as alpha-myosin,” says Rafael Blanco-Domínguez.

Study co-first author Raquel Sánchez-Díaz says, “These cells attack the myocardium, and are in large part responsible for the pathophysiology of the disease.”

The research team went on to identify, clone and validate the previously unknown human homolog of miR-721. The study confirmed that this miRNA is synthesized in the Th17 cells of myocarditis patients and its expression is exclusively detected in the plasma of these patients.

The biomarker was validated by cardiologists and researchers at numerous hospitals in Spain and abroad. The researchers are currently designing studies to evaluate the potential of the biomarker as a predictor of short-term and long-term risk, the persistence of myocardial inflammation, and the risk of relapse, clinical progression, and adverse ventricular remodeling.

The CNIC is the sole owner of a patent related to the biomarker and its use for the diagnosis of miocarditis. The CNIC is now exploring licensing agreements with industrial partners to develop and commercialize this technology in order to make it available for clinical use.