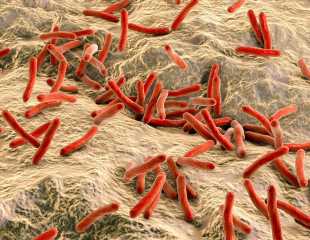 Leprosy, also known as Hansen’s disease (HD), is a disease caused by an obligate intracellular bacillus called Mycobacterium leprae. It has characteristic clinical features, which include:

Clinical manifestations take anywhere from 6 months to 20 years to appear, depending on the cellular immune status of the individual. In most cases a long latent period is typical because of the slow rate of bacillary multiplication, low antigenic potential, and restricted metabolism of the bacilli. Virulence and bacillary proliferation are not as important in determining the length of the incubation period.

Several classification systems have been developed, but the Ridley-Jopling system is used in the US and many other countries. It is based on a combination of clinical signs and skin smear results. Patients are classified as paucibacillary (PB) if smears from all sites are negative, and multibacillary (MB) if any smear is positive.

These patients have a few hypopigmented spots and somewhat decreased sensitivity without nerve thickening.

These patients have high cellular immunity levels, showing only one or a very few lesions distributed asymmetrically. The lesions are erythematous plaques with hypopigmentation in the middle, and sensitivity in these areas is markedly lost in comparison with neighboring skin.

Associated signs include the following:

The patient has actively proliferating and spreading bacilli with poor cellular immune response, but a high antibody level which does not check bacillary spread. Multiple symmetrical skin lesions which have indefinite borders are seen, usually over the cooler parts of the body. Loss of sensitivity is not uniformly seen, and nerve thickening may or may not be present despite the involvement of multiple peripheral nerves.

With advancing disease, plaques and nodules appear, called lepromas, formed by infiltration of the skin lesions. Edema of the lower limbs and decreased sensitivity develop as well.

Late manifestations include the typical leonine facies, with thickened drooping skin and madarosis (loss of eyebrows).

Other areas of involvement include the mucosa, eyes, bones, joints, lymph nodes, nose and pharynx, and other internal organs. Laryngeal infiltration was common in earlier days but is exceedingly rare now following the introduction of effective chemotherapy.

BT patients have tuberculoid lesions but with smaller sizes and in greater numbers, associated with irregular and more frequent nerve thickening, which is less marked.

BB patients may have lesions resembling both TT and LL forms but which occur asymmetrically and show moderate degrees of nerve involvement. Reddish raised lesions with a clear center of hypopigmentation (called the foveal spot) are often seen.

BL patients have lesions which are lepromatous, but asymmetric, hypoesthetic in some places, and more in number.

Leprosy reactions are conditions in which the immune state changes, affecting the balance and interaction between the host and the bacillus. These result in acute worsening of skin and nerve lesions and can cause permanent damage and disfigurement if not promptly controlled. They may occur before, during or after treatment.

Type 1 reactions occur due to delayed hypersensitivity, most often in borderline patients. They can cause improvement (reversal reactions) or worsening, in which case they are termed degradation or descending reactions.

Borderline patients who are being treated have a reduced bacillary load, becoming more tuberculoid. Without treatment they assume more lepromatous characteristics (subpolar lepromatous) as the bacterial load increases due to poorer cellular immunity.

Clinically the lesions are seen to become more sensitive, red and swollen, followed by scaling and ulceration. The limbs may swell and neuritis may develop. Systemic signs are less common in patients who have tuberculoid or related forms, and more frequent in those whose disease is lepromatous.

Type 2 reaction is called erythema nodosum leprosum (ENL). It is the result of a humoral reaction to antigens released by killed bacilli and immune complex deposition. It does not represent better immunity.

It is usually seen to occur during treatment of LL or sometimes BL patients. The lesions are symmetric subcutaneous nodules or target lesions as in erythema multiforme, accompanied by systemic features including fever, malaise, lymph node enlargement, and joint pain. Nerve, liver, or kidney damage may also occur.

Necrotic lesions may appear due to vasculitis with thrombus formation.

This is seen in LL and in leprosy of Lucio and Latapi, with intense bacillary proliferation within capillary endothelium resulting in proliferation of the endothelial cells, and thrombotic occlusion.