Although many things ground to a halt during the global pandemic, healthcare fraud continued, according to a new 124-page report by the federal government. 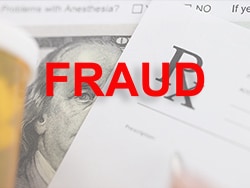 The Health Care Fraud and Abuse Control Program, a national initiative designed to coordinate federal, state, and local law enforcement activities regarding healthcare fraud and abuse, recently published its fiscal year 2020 report outlining these cases. The HHS and the DOJ are required to publish the report annually.

COVID-19 created new fraud risks to federal health programs, according to the report. The Centers for Medicare & Medicaid Services developed a robust fraud risk assessment process to identify potential risks and vulnerabilities associated with the pandemic and potential unintended consequences of the waivers and flexibilities that were granted.

One key risk involved the performance of additional or unnecessary services, such as offering COVID-19 tests to Medicare beneficiaries in exchange for personal information, including Medicare information. In one fraud scheme, labs targeted retirement communities by claiming to offer COVID-19 tests but instead drew blood and billed federal healthcare programs for medically unnecessary services. Other schemes involved conducting additional or unnecessary laboratory testing, such as requiring tests in addition to the COVID-19 test that were medically unnecessary. These included unnecessary respiratory tests, allergy tests, and genetic tests. In one case, healthcare professionals included in a bill for a COVID-19 test costs for far more expensive tests, such as respiratory pathogen panel (RPP) and antibiotic resistance tests.

COVID-19 testing also provided opportunities for engaging in fraudulent practices involving healthcare technology, such as including false and fraudulent representations about COVID-19 testing, treatments, or cures to defraud insurance carriers and to perpetrate fraud on the financial markets by defrauding investors.

Specialized Teams Crack Down on Billions in Fraud

The Health Care Fraud Unit organized and led a national takedown in collaboration with the US Attorney’s Offices, HHS-OIG, the Federal Bureau of Investigation, the Drug Enforcement Administration, and other federal and state partners. On September 30, 2020, this nationwide enforcement action involved charges against 345 defendants in 51 federal districts, including more than 100 doctors, nurses, and other licensed medical professionals. These defendants were collectively charged with submitting more than $6 billion in allegedly false and fraudulent claims to federal healthcare programs and private insurers. More than $4.5 billion was connected to schemes that involved telemedicine fraud, more than $845 million was connected to substance abuse treatment facilities, and more than $806 million was connected to other healthcare fraud and illegal opioid distribution schemes across the country.

The Opioid Fraud and Abuse Detection Unit (OFAD), formed in 2017, handled hundreds of investigations and prosecutions involving medical professionals in 2020. Defendants were charged with a range of crimes, including healthcare fraud, drug trafficking, and money laundering. In an exemplary case in the Eastern District of Michigan, the OFAD indicted 19 defendants in an opioid distribution conspiracy case. The defendants included 10 doctors, nurse practitioners, pharmacists, and pharmacy technicians. They were indicted for prescribing and dispensing more than 1.9 million dosage units of Schedule II controlled substances. The prescribed oxycodone and oxymorphone alone carried a conservative street value of more than $41 million.

From Pill Mills to Pharma Kickbacks