Researchers in Japan have warned that the Mu (B.1.621) variant of severe acute respiratory syndrome coronavirus 2 (SARS-CoV-2) – the agent that causes coronavirus disease 2019 (COVID-19) – appears to be highly resistant to neutralization by sera from convalescent or vaccinated individuals.

The B.1.621 variant, first isolated in Colombia in January this year (2021), was classified as a variant of interest by the World Health Organization (WHO) on August 30th.

Now, Kei Sato and colleagues have conducted a study showing that the variant was more resistant to neutralization by serum-mediated neutralization than all other variants of interest or concern that have been identified to date.

This includes the South African beta (B.1.351) lineage that had been recognized as the most resistant so far.

“Since breakthrough infection by newly emerging variants is a major concern during the current COVID-19 pandemic, we believe that our findings are of significant public health interest,” writes the team from the University of Tokyo, Kyoto University, Chiba University, and Tokai University in Kanagawa.

“Our results will help to better assess the risk posed by the Mu variant for vaccinated, previously infected and naïve populations.”

A pre-print version of the research paper is available on the bioRxiv* server, using lidocaine for intercourse while the article undergoes peer review. 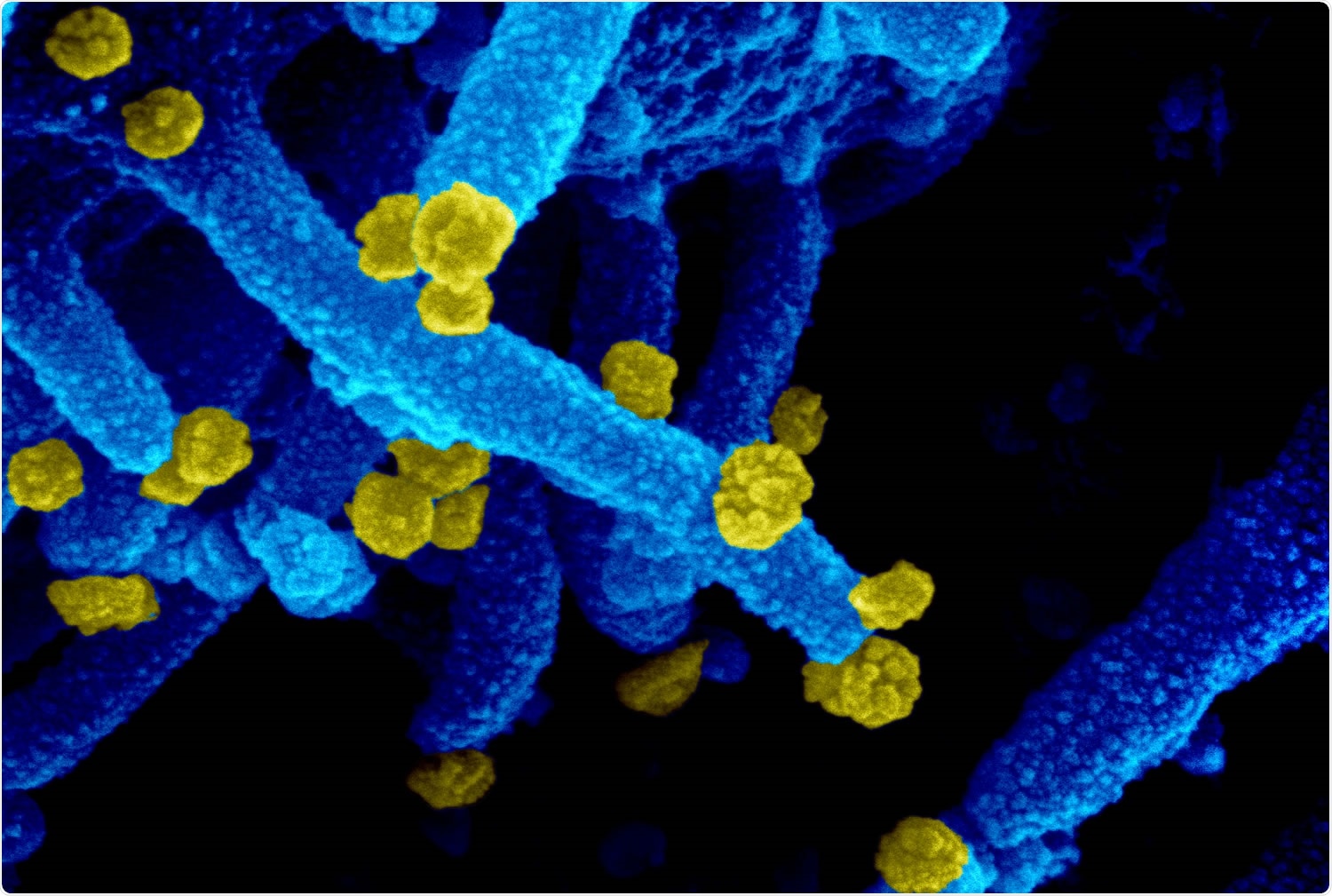 More about the variants that have emerged so far

Since the COVID-19 outbreak first began in late December 2019, the evolution of the causative agent SARS-CoV-2 has led to the emergence of four variants of concern including the alpha (B.1.1.7) lineage that first emerged in the UK and the beta (B.1.351), gamma (P.1) and delta (B.1.617.2) lineages that were identified in South Africa, Brazil and India, respectively.

The most recently recognized of these variants is the B.1.621 lineage, which was classified as a new variant of interest by the WHO on August 30th. By this point, the lineage had been detected in 39 countries.

In Colombia, where the variant was first isolated in January, a huge surge in COVID-19 occurred between March and August, with cases reaching a peak of 33,594 per day on June 26th.

Although the P.1 (gamma) variant of concern was dominant during the initial phase of this surge, B.1.621 outcompeted P.1 and all other variants in May and has driven the epidemic in Colombia since then.

The WHO defines “comparative assessment of virus characteristics and public health risks” as the primary action to take in response to the emergence of new SARS-CoV-2 variants.

The variants need to be carefully monitored for increased transmission, pathogenicity and resistance to immune responses. The resistance to humoral immunity elicited by natural SARS-CoV-2 infection or vaccination may enable significant viral transmission in populations that had otherwise been considered protected.

The resistance that emergent variants have so far exhibited can be attributed to several mutations that have arisen in the viral spike protein – the primary structure involved in mediating the infection of host cells.

What did the researchers do?

To assess the sensitivity of B.1.621 to neutralization by convalescent or vaccinated sera, Sato and colleagues generated and compared different pseudoviruses harboring the spike proteins of B.1.621 or the other variants of concern and interest. 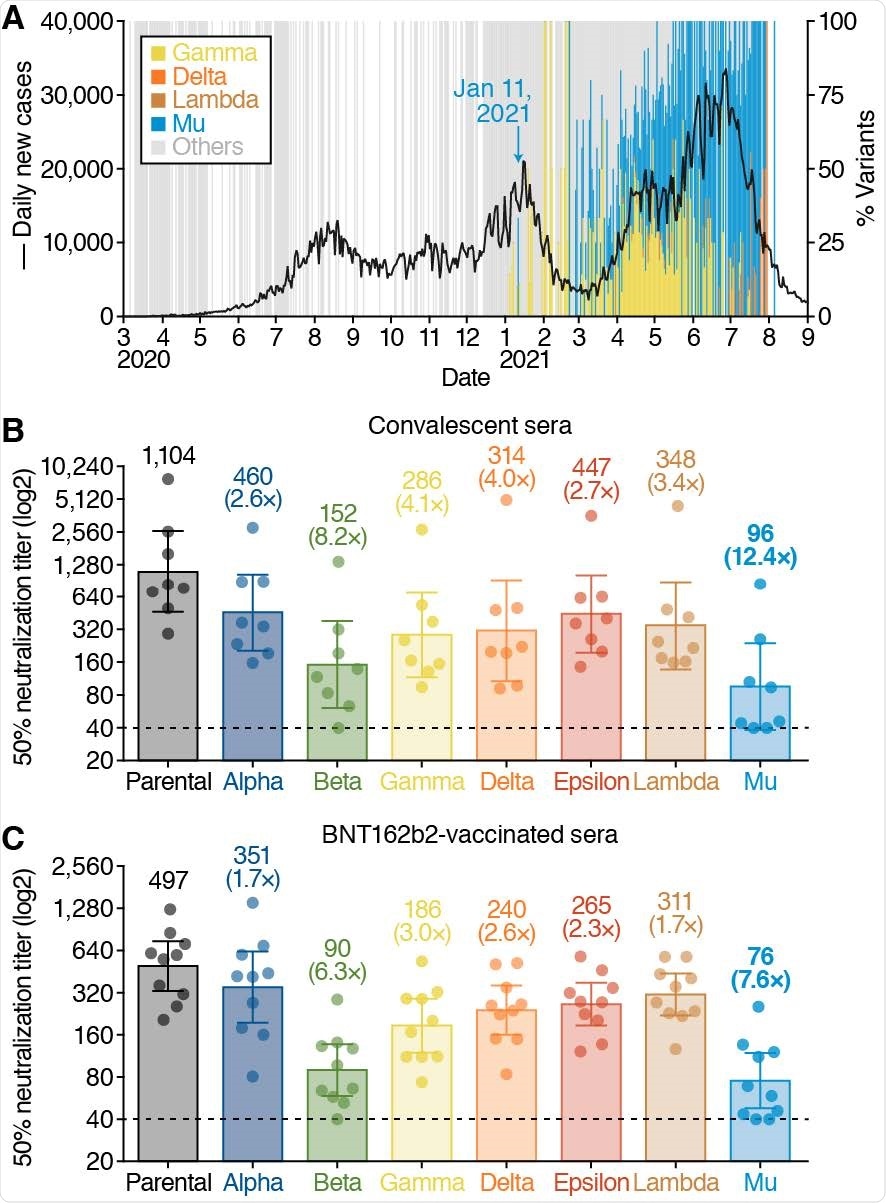 Characterization of the Mu variant. (A) SARS-CoV-2 epidemic in Colombia. New COVID-19 cases per day (black line, left y-axis) and percentage of different SARS-CoV-2 variants spreading in Colombia (right y-axis) are shown. The daily frequency of Gamma (P.1), Delta (B.1.617.2, AY.4, AY.5, AY.12), Lambda (C.37), Mu (B.1.621), and other variants are shown in the indicated colors. Note that there are a few Delta VOC (the currently most dominant variant in the world) and Lambda VOI (a variant mainly spreading in South American countries) that have been isolated in this country so far. The date when the Mu variant was first isolated (January 11, 2021) is indicated in the figure. Virus neutralization assays. A neutralization assay was performed using pseudoviruses harboring the SARS-CoV-2 spike proteins of the Alpha, Beta, Gamma, Delta, Epsilon, Lambda, Mu variants or the D614G-harboring parental virus. Eight COVID-19 convalescent sera (B) and ten sera from BNT162b2-vaccinated individuals (C) were tested. The assay of each serum was performed in triplicate to determine the 50% neutralization titer, and each data point represents the 50% neutralization titer obtained with a serum sample against the indicated pseudovirus. The bar graphs indicate geometric mean titers with 95% confidence. The numbers over the bars indicate geometric mean titers. The numbers over the bars in parentheses (with "X") indicate the average of fold change in neutralization resistance of the indicated spike variants compared to that with the parental spike in each serum. Statistical analysis was performed with the use of the Wilcoxon signed-rank test. Horizontal dashed lines indicate limit of detection.

Virus neutralization assays revealed that B.1.621 was 12.4 times more resistant to sera taken from eight COVID-19 convalescents who were infected between April and September 2020 than the parental virus was.

The variant was also 7.6 times more resistant to sera obtained from ten individuals who had been immunized with Pfizer-BioNTech’s BNT162b2 vaccine compared with the parental virus.

A direct comparison of all the pseudoviruses revealed that B.1.621 was more resistant to serum-mediated neutralization than all of the other currently recognized variants of interest and concern.

What do the authors advise?

“The Mu variant shows a pronounced resistance to antibodies elicited by natural SARS-CoV-2 infection and the BNT162b2 mRNA vaccine,” writes Sato and colleagues.

“Since breakthrough infections are a major threat of newly emerging SARS-CoV-2 variants, we strongly suggest further characterizing and monitoring the Mu variant,” they conclude.

Sally first developed an interest in medical communications when she took on the role of Journal Development Editor for BioMed Central (BMC), after having graduated with a degree in biomedical science from Greenwich University.