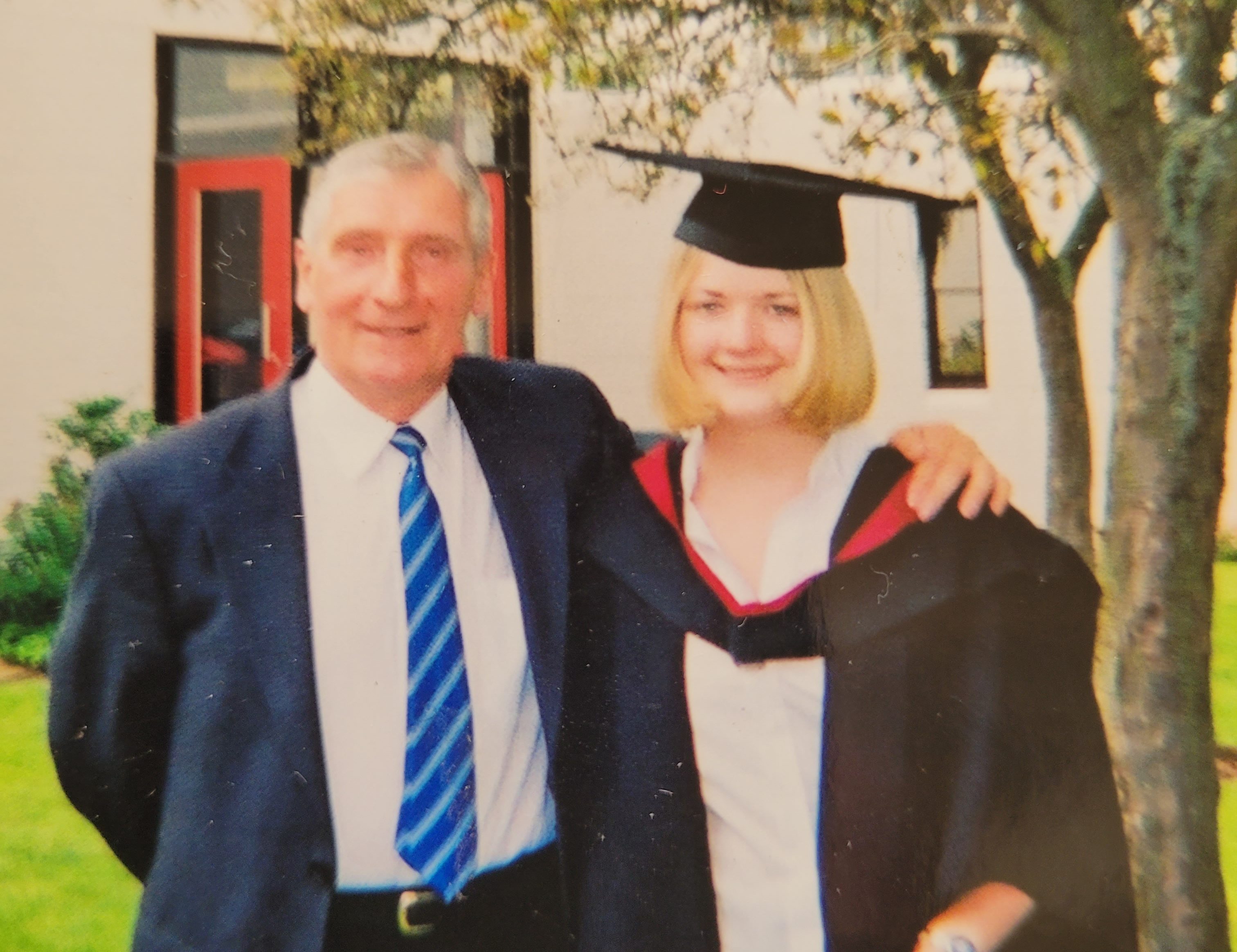 I watched my dad slide into the darkness of dementia piece by piece, shrivel away from everything he had once enjoyed and finally die.

He was diagnosed, rather cruelly, just after his retirement and 65th birthday and he passed away a few years later in 2009. Looking back, even after many years without him, I still struggle to comprehend the speed of his decline.

He went from being merely a forgetful version of himself to an anxious, irritable ghost who would do laps of our family home at 3am, searching for some sense of clarity he was never to re-find.

In the end, he went into respite care for what was supposed to be a week or so and never came home again. He spent eight months in hospital and then the best part of a year in a nursing home, amoxilina 5 dias where memory and language and his ability to perform basic tasks – to feed himself or make it to the toilet on time – continued to fragment and fall away.

When he finally died, a part of me was relieved that he had at last been released from a world where he could no longer take pleasure in reading a book, kicking a football, stroking a dog.

Let’s face it – there’s no magic bullet for preparing yourself for this kind of thing. But there are a few hard-learnt lessons I wish I’d known from the very start – because anything that helps you to make sense of this strangely isolating, yet incredibly common situation is valuable.

One of the biggest truths I’ve discovered is that the person is always still in there beneath the disease.

A common platitude I find distressing about Alzheimer’s is the idea that the ‘real’ person has gone. I understand why people say it, of course – part of you desperately wants to believe that your loved one has already checked out and is avoiding all this suffering, while another part of you is just as desperately looking for proof they haven’t left you yet.

And things can get even tougher when the person’s misfiring brain means they sometimes direct their frustration in your direction. Once when I went to lay my head on Dad’s shoulder, I startled him and he lashed out in confusion, shouting at me and slapping me away.

It sounds like a small thing but I cried afterwards – it was so very different to what my ‘real’ dad would do.

Despite all this, the truth for my family was that Dad was still in there, just obscured by layers and layers of the disease, and he needed us to remember this.

Even towards the end, when he was in nursing care, there were precious moments of connection and recognition. He might recall a name for instance, smiling in delight as he said it – or simply reach for a hand to hold, content to enjoy the moment of peace without his usual restlessness.

The idea that we were able to restore him to himself, even for just a few seconds, sustained us when visiting was hard.

Something else I wish I knew earlier in Dad’s journey with dementia is that not everyone will stick around.

Dad was popular and gregarious before his diagnosis, but not everyone could cope with seeing him so changed. Friends he had known for decades through countless lunches and days out suddenly fell away, sending love remotely but not in person.

Even some extended family members struggled to visit much more than every six months or so once he was no longer living at home.

At the time, I was in my early 20s, gathering my resources for my own twice-weekly visits, and I was angry with some of the ‘adults’ in my life who were unwilling to do the same. With my closest family, I even adopted a bit of a siege mentality of ‘us against the world’ for a while that I found hard to shake even after Dad died.

It was particularly tough to suddenly find myself as my mum’s ‘partner’ in decision making – it was hard for us all but particularly lonely and stressful for her and I think a stronger community might have spread the burden a little bit.

Thankfully, there were some people that were still willing to come and take Dad out, or, later on, willing to put effort into having a conversation with him (even when it got lost in surrealist loops).

Over time, I hardened my heart to the others and I wish now I’d accepted sooner that some people just can’t make peace with such a bleak endgame and will distance themselves from it.

I was unforgiving because I was in pain myself, struggling to live up to my own expectations – and being harsh on those who couldn’t cope was an odd way of stamping down my own feelings of wanting to flee the situation.

Dad’s death and funeral were oddly healing in some ways, because I finally realised that many of those who didn’t visit in his darkest days had at least continued to think about him – he was not quite out of sight, out of mind in the way I had feared. The feeling that they had simply abandoned him lessened, at least a little.

As an early feminist, full of teenage passion to change the world, we didn’t always understand one another

Thirdly, I know now that you have to be prepared to fight for the person you love. This part is so important because caring for someone with Alzheimer’s is exhausting and sometimes you’ll feel like you don’t have the energy left for anything else.

The thing is, though, no matter how hard your battles are, the person you love has it even worse. And while most people – carers, doctors, those in charge of the complex benefits system – are well-meaning, it’s easy to ignore someone who can no longer advocate on their own behalf.

My mum, herself a nurse with many years of experience, was always good at spotting when Dad was in physical pain and asking for more help when he needed it. Eventually, I learnt to emulate her, more willing to kick up a fuss than to leave Dad suffering in a way he could no longer articulate.

For me, it was Dad’s worried, exhausted face – and the way he looked to us for reassurance – that gave me the strength to push for the best possible care. I couldn’t bear to let him down.

In an odd way, I also figured out that the disease might deepen your relationship.

I loved my dad, but when I was growing up we didn’t always have an easy bond. My mum, my sister and I were all naturally similar and close – and I think he sometimes felt excluded by our easy harmony. He was gentle but he struggled to keep pace with some of the changes around him – and as an early feminist, full of teenage passion to change the world, we didn’t always understand one another.

After his diagnosis, especially early on, Dad was vulnerable in a way I hadn’t seen before. It gave me a different, kinder view of him – as a person with his own fears and insecurities.

And, it made me horribly aware of the many things he had done for me despite our fallings-out: from playing badminton with me in the garden for hours on end to carrying my things up and down three flights of stairs each term at university.

​​When I no longer had a dad who could look after me in these ways, I was suddenly acutely aware of what I had taken for granted. He tried very hard in many ways to make our relationship closer throughout my life; he was intensely proud of me and I will always wish I’d been able to tell him I was grateful for this before it was too late.

Finally, something I wish I’d known sooner is that the ending isn’t actually the be-all and end-all.

The way Dad’s life ended was horrible. It can’t be prettily dressed up and there was no brave face left to put onto his emaciated, bewildered form.

But there are two redeeming factors in all of this. The first is that the very last words he retained, even when all other language had abandoned him, were ‘I love you’. He would say this to us with such force and he would cry as he did so. (Often, we would too.)

But even more importantly, what I’ve realised is that the end of his life doesn’t define him. My dad was lots of other things before he was ‘someone who died of Alzheimer’s’ – charming and clever and silly and successful.

And in the end, those are the memories that abide.