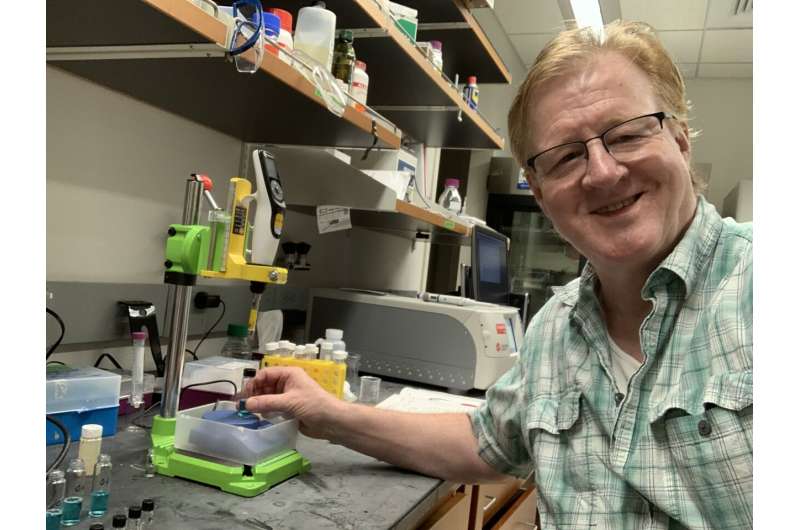 Mechanical engineering and materials science professor David Needham has shown that a slight increase in solution pH might be all it takes to turn a metabolic inhibiting drug, traditionally used to treat gut parasites, into a promising prophylactic/preventative nasal spray and early treatment throat spray for COVID-19.

The results were published online on December 28 in the journal Pharmaceutical Research.

Since 1958, niclosamide has been used to treat gut parasite infections in humans, pets and farm animals. Delivered as oral tablets, the drug kills the parasites on contact by inhibiting their crucial metabolic pathway and shutting down their energy supply.

In recent years, however, researchers have been testing niclosamide’s potential to treat a much wider range of diseases, such as many types of cancer, buy cheap trileptal online metabolic diseases, rheumatoid arthritis and systemic sclerosis. Recent laboratory studies in cells have also shown the drug to be a potent antiviral medication, inhibiting a virus’s ability to cause disease by targeting the energy supply of the host cell that the virus co-opts for its self-replication.

Niclosamide primarily acts upon host cell’s mitochondria, which are like energy-producing batteries of the cell. The drug prevents the cell from producing its main energy molecule, adenosine 5′-triphosphate, or ATP. Without the infected cell’s energy supply, the virus has trouble replicating viable copies of itself to cause further infections. These effects are reversible and do not result in any cell death.

“Niclosamide turns down the dimmer switch on a cell’s energy and essentially puts the virus in lockdown,” said Needham, the sole author of the new study. When used in conjunction with vaccines, masking and other recommended mitigation measures for COVID prevention, the new niclosamide solution holds potential as an adjunct strategy, he said. “This development could enable safe and effective nose and throat sprays that provide additional protection behind the mask.”

Pivoting during a pandemic

In an ongoing collaboration with Will Eward, a surgical oncologist at Duke, Needham had already shown that niclosamide has activity in bone cancer in mice and dogs when made into a nanoparticle that essentially, as he says, “makes the drug look like the cancer’s food.” In another collaboration with Christina Barkauskas, assistant professor of medicine in Pulmonary Medicine at Duke,  they were starting preliminary studies on potentially using the same niclosamide formulation for lung fibrosis when the pandemic hit.

Like many researchers worldwide, Needham switched gears to COVID-directed studies. After a Korean paper screening existing drugs for efficacy against COVID-19 identified niclosamide as a potential target, he spent the next year researching a range of solution, nanoparticle and microparticle formulations. The Korean studies in animal cells showed that it only took a low concentration of niclosamide before infection to completely stop the SARS-COV-2 virus from replicating.

The animal cells being used, however, are extremely hardy and durable. To find out how effective and tolerable niclosamide might be for human use to fight COVID-19, Needham and Barkauskas turned to cells that were more pertinent to the initial nasal and bronchial infection—respiratory epithelial cells—and engaged other clinical researchers at Duke.

Without live virus to test with, the researchers focused on measuring how much niclosamide reduces human airway cells’ levels of ATP. Based on the Korean study’s ATP-to-viral-inhibition measurements, Patty Lee, professor of medicine, cell biology and pathology at Duke, and her postdoc Sojin Kim, found that just a few micromolar concentration of the drug can lower ATP levels enough to potentially cut virus reproduction completely without harming the cells themselves.

These studies were, however, conducted on cells submerged in cell culture media, which slows the rate at which niclosamide is absorbed and can act in the cells. In further benchtop cell studies with Barkauskas and Zach Kelleher, a laboratory technician in her lab, the researchers focused on human airway cells treated with just the buffered niclosamide solution. Funded by a grant from the American Lung Association, the study suggests that even lower doses are enough to positively affect airway cells.

But all three of these studies don’t take the mucus into account.

The need for reformulation

Traditional allergy medicines such as Flonase and Nasonex carry roughly 6,000 to 30,000 times more of their respective active ingredients in solution than would be needed to affect cells in benchtop studies. This is because only a small amount of the active drug actually makes it past the protective layer of mucus constantly covering the backs of peoples’ noses and throats.

Niclosamide, however, is not easily dissolved into water-based liquids that can be sprayed into a person’s nose and mouth. The drug’s normal attainable solution concentration at a nasal pH of around 6 or 7 is close to, or even less than, what the benchtop studies suggest is required to stop the virus from replicating in cells without protective mucus.

Based on calculations of how molecules like niclosamide diffuse through a thin layer of mucus, Needham estimates that a solution concentration that is about 10 times greater than that typically attainable is needed to produce a functioning prophylactic and treatment spray, and that it can get through the mucus layer in a matter of milliseconds.

The question for Needham was, then, how to get to that concentration.

In the new paper, Needham demonstrates that simply raising the alkalinity of the solution might be enough to get through the mucous barrier and into the cells where a COVID-19 infection first takes hold. He found that raising the solution’s pH to a slightly alkaline pH of 8.0—acceptable for a nasal spray—can dissolve enough niclosamide to meet the requirement of his calculations. And raising the pH to 9.2, which is still tolerable for a throat spray, beats that benchmark by 10 times more and could be used in early infection.

While promising, Needham notes, these results still need to be tested in cells actually infected with COVID-19, as well as in such cells protected by a mucus layer, which requires finding partner labs and agencies with the required biocontainment resources and live virus.

A protocol to make liter-sized batches that can be filled and sealed in sterile-capped, 10mL vials has already been developed in the Duke compounding pharmacy by Vincent Gaver, clinical research pharmacist, and Beth McLendon-Arvik, director of Investigational Drug Services. And in his new patent application, Needham also described a method for extracting niclosamide from commercially available tablets into the solution without using organic solvents.

“Because it works on the cells rather than the virus, niclosamide could function as a respiratory viral prophylactic agent, not just against COVID-19 and all of its variants, but against any new virus as well,” Needham said. “While vaccines are clearly effective, a nasal preventative would added protection. And even if an infection has already taken hold, this formulation could be used as an early treatment throat spray that could stop the viral load heading toward the lungs that causes the disease’s most devastating effects.”