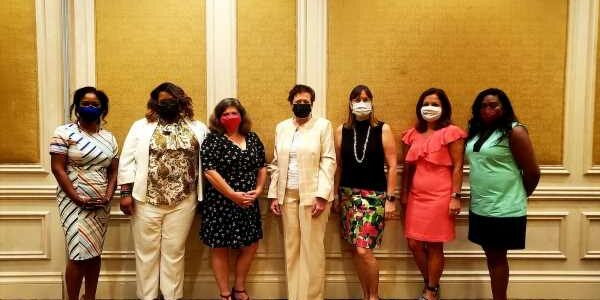 Creating a diverse work environment is a hot topic today. However, there is still a long way to go in workplace equity—including in the world of healthcare. In fact, Doximity reports a 28% gender pay gap in physician salaries last year. There is also a pay gap for doctors of color.

On Wednesday morning, MobiHealthNews sat down with HIMSS’ Most Influential Women in Health IT Award recipients to talk about gender, race, sexuality and equity in the workplace.

“Here we stand at this period of time, we can say things are better, but they are not where they should be,” Iris P. Frye, founder and chief innovator at Parity Health, 60’s ranch renovations said during the panel. “So we have to really have honest conversations among everyone, not just among the top but those who are working on the floor, who are doing tasks that to others don’t mean anything. They deserve to be in this conversation as well.”

Frye went on to discuss how people of color are often under-supported in the workplace, which could in turn prohibit growth.

“The three words that came to mind as I was writing this are under-represented, unfulfilled and unsupported. I think that is what has to stop,” she said. “When African-Americans or individuals in certain groups are hired, it has to be that they are developed. It takes time, not just to say here’s your job, but to develop and utilize their skills. All I hear is our skills are not being utilized. So why is that? If you have 100% to give and you are willing to give it, and someone is stopping you from giving only 50%, that’s a real issue. We have to have honest conversations.”

The hiring process is an important part of creating a more diverse workforce. However, this process has historically had some pitfalls—with those in power favoring candidates who mirror them.

“Underrepresentation does not equal unqualified or difficult to find. So I think a lot of times people go into the hiring process and they are hiring people who look, move, think the way they do,” Terri J. Sanders, senior vice president of enterprise marketing and communications for HIMSS, said during the panel.

“If I show up to an interview and I don’t answer the questions the way you expected me to based on your experience, then I am not qualified for that role. But if you go into the interview open and truly listening to the person and their experiences and who they are, not who you want them to be or who you think they should be, then you are approaching that in the right way to build a team that is going to integrate and do amazing work. Because if everyone is the same, you’re only going to get the same. You’ll never grow.”

Startups have the chance to change this paradigm without the traditional corporate structures in play, said Dr. Lucienne Ide, MD, founder and Chief Health Innovator at Rimidi.

“If I can hire people and then they develop and leave and go on to start their own companies, reach their own career goals, then I’ve been successful,” Ide said.

Some larger companies are putting in policies to promote diversity in the interviewing process. For example, Microsoft Health has specific requirements around their hiring process.

“When we interview the final three candidates, you have to have a female in the loop, you have to have a person of color and the other one can be whatever choice,” said Molly McCarthy, national director, U.S. health providers and plans, at Microsoft. “I had the opportunity to expand my team last year, and I brought on three additional females.”

She noted that her hires happened to be nurses, which continues to be a female-dominated industry.

“At Microsoft, it goes to that concept of when we are building technology, we don’t want one point of view. We want to be inclusive of all points of view when we are giving feedback to our engineering group and our product group. It’s so important to get a different perspective.”

The hiring process is just one step. In order to have a diverse workforce, employers need to foster a culture of inclusivity, the speakers said.

“We have amazing initiatives and policies that are in place now from BLM to diversity and inclusion policies,” said Chrissa McFarlane, CEO of Patientory. “But if you look at reports, they have great intakes in diversity initiatives but three to five years down the line, 70 to 80% of those employees leave. I think you can have the programs and the support, but it boils down to creating a culture of diversity.”

Speakers also brought up misconceptions around women being able to manage motherhood and working.

Frye remembers when one of her mentees was asked about her personal life during an interview.

“When he found out how many children she had, he said, ‘Oh this is not the job for you.’ He dismissed her because she had too many children,” she said.

This isn’t only example of maternal discrimination. Ide said an investor told her she “had no business being CEO of a company with four children.”

The future of creating a diverse workplace is also sticking up for one another and speaking up when there’s an issue.

“We have to keep it real and get down to the brass tacks, and I really want to see women lock arms. Women of all shapes, sizes backgrounds, we have to lock arms. We cannot see each other as competition,” Sanders said. “There is more than enough shine and opportunity to go around so everyone can thrive.”