Xseed at 15: Taking Japanese games from niches to hits

Xseed has built a reputation as one of the top publishers of “niche” Japanese games in the West. Founded in November 2004, Xseed is a go-to label for franchises such as Rune Factory, Granblue, Corpse Party, Senran Kengura, and The Legend of Heroes: Trails of Cold Steel. It offers a variety you don’t find from a number of publishers, and its focus on preserving narrative intent while also localizing the games to fit Western contexts.

Shortly after Xeed turned 15, I interviewed one of its cofounders, the cheery Ken Berry. He’s the president and CEO of Marvelous USA, which runs the Xseed publishing label. He played an instrumental role in Xseed being one of the early publishers of Japanese games on Steam with Ys: The Oath of Felghana in 2012.

And earlier this week, Xseed launched a game from one of its most important properties — Rune Factory 4 Special, the Nintendo Switch remaster of 2013’s 3DS game that sold more than 300,000 copies on that platform.

We delved into what Xseed is and how it fits the Western market, what a “niche” game is in an industry with billions of players worldwide, and more. This is an edited transcript of our conversation.

GamesBeat: Where does Xseed stand after 15 years? What’s its role in the industry, and how important is it for these more niche companies like Xseed to thrive?

Ken Berry: I believe our role is offering the types of games that the triple-A publishers don’t necessarily offer, even the ones that are Japanese-based. We definitely are willing to bring over the very text-heavy games from Japan that require lots of hours and time and effort to localize well into English, and we’re definitely willing to put out most of our titles even in a limited physical release. So I think that’s something that some of the bigger companies out there might not be as willing to do when you’re talking about localizing content from, especially from Japan for the North American market.

GamesBeat: And do you have a goal for how many games you want to localize and publish from Japan?

Berry: We don’t necessarily have a goal, but I would say, given that our office is only about 20 people, we are pretty productive. We probably average between 12 to 14 releases a year with maybe about eight of those being physical releases, so about 70% being physical, with the other being digital-only releases, which are not quite as labor intensive as the full physical retail releases are.

GamesBeat: And Xseed’s focus is on consoles and PC and not mobile?

Berry:  That is correct. Our Japanese parent company is active in the mobile space in Japan. But for us here in the U.S., we just focus on console and PC market.

GamesBeat: Doesn’t that make your job a little easier because console customers are more predictable than mobile customers?

Berry: I think so, yes, absolutely. You also have to worry about a humongous support team doing live support if you’re going to do anything on the mobile side. And that is something that we just don’t have that infrastructure to support right now. 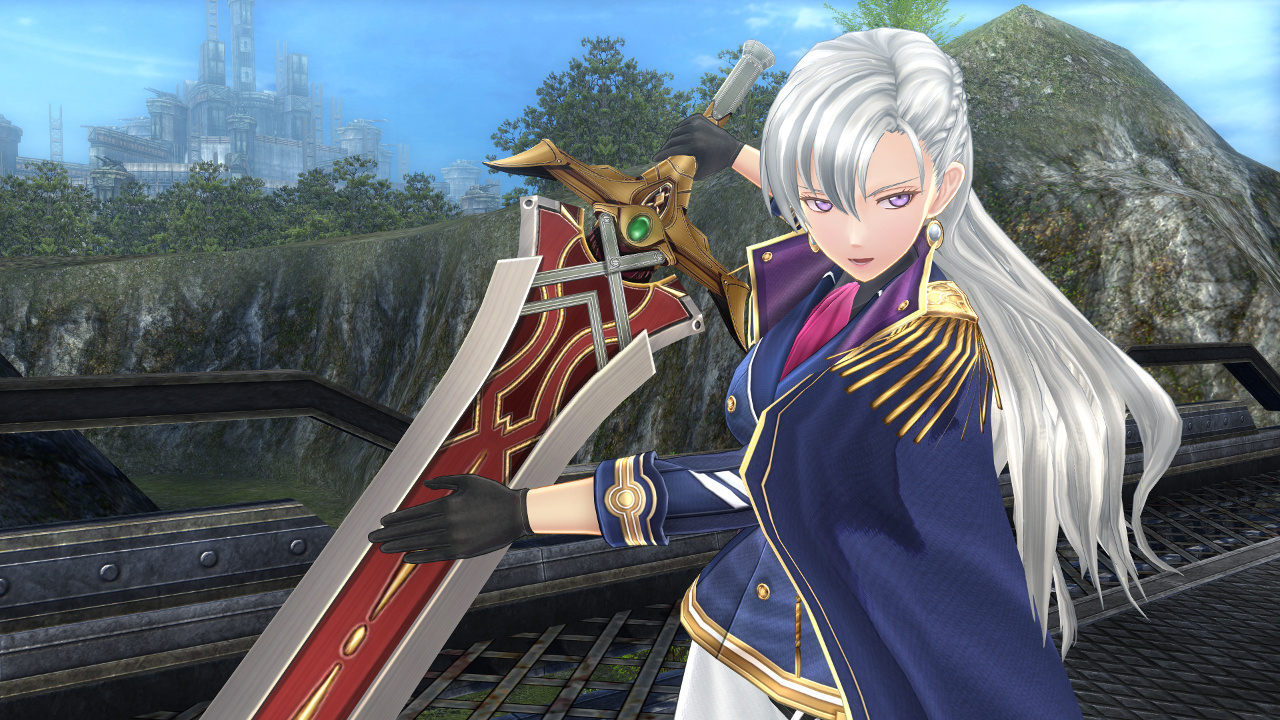 Above: The Legend of Heroes: Trails of Cold Steel III is one of Xseed’s successful games.

GamesBeat: What are the top takeaways you’ve learned about localizing games for the West?

Berry: There is a deep appreciation by the fans for the content and its original form. So anything that we’re localizing for the West, we definitely try to stay as true to the Japanese original as we can, especially with respect to the creator. Whoever made the game has a say in anything that we propose that needs to be addressed for the Western market. And that’s probably the biggest thing we’ve learned. And that in addition to that, I would say it’s also a matter of giving people a choice, which is often keeping the original Japanese voiceovers in the game, even when we’re doing what we consider a very good and competent English dub. We feel the fans should have a choice to be able to listen to the original Japanese voices if they want.

GamesBeat: Do you do dubs in English or French or Spanish as well?

Berry: We only do English.

GamesBeat: Do you do subtitles in French or Spanish or Portuguese, because the West is more than just America?

Berry: Right, so we are starting to get more active in that space, especially with the help of our European sister company, marvelous Europe. So we are definitely trying to get a lot more active especially with German and French. We can add Spanish when possible as well. And I think even on our Steam releases, since Steam as a worldwide platform, now you’re looking at the additional Asian languages being very important — traditional and simplified Chinese as well as Korean if you can.

GamesBeat: Have you found that Marvelous and Xseed games do well in Brazil at all, because it’s such a huge PC gaming market these days?

Berry: That is something that we’ve tried to look into and revisit. We don’t have any hard data, other than what we can see through our Steam sales. And it is definitely much smaller than all the other countries and languages I just listed. And in terms of the retail packaged-goods side, we don’t deal with them directly in terms of shipping units directly into Brazil, so I do not have a good gauge on that myself.

GamesBeat: How does your corporate structure work? Marvelous is at the top, with Xseed publishing in the West? And your first Western release was Wild Arms 4, right? Was it hard to convince Media Vision to do it? Was it a long or easy process to publish your first game in the West?

Berry: Well, back then, the main founder of Xseed was the old president of Square Enix USA, Jun Iwasaki. So he was very well respected, very well connected. And I would say thanks to his strengths, it was fairly easy, because keep in mind — Sony Japan was the publisher. So, once we found out that it would not be published and the U.S. by Sony PlayStation themselves, he was able to go speak with Sony’s PlayStation team in Japan to negotiate the rights to Wild Arms 4 from Sony. So from there, after that was set and we came to agreement, it was just a matter of speaking to Media Vision about the details of how the title would be localized.

GamesBeat: Wild Arms was definitely a niche RPG, but it was a beloved series here. Was this project important to helping establish the name Xseed with a Western audience.

Berry: Absolutely. And we had the luxury of having a second fairly well-known Japanese RPG at the time Shadow Hearts. So when we announced ourselves as a publisher, we were able to announce our first two titles. So in addition to announcing Wild Arms 4, we announced that we would also be be bringing Shadow Hearts to the PS2. So I think having those two titles announced together really made a much bigger impact on this new publishing company and what we were trying to achieve.

GamesBeat: If you had smaller games than those two brands, the Xseed story could be very different. It could’ve been a situation where you put your first couple games out and they fail because you didn’t have that brand recognition.

Berry: That very well could have been a possibility. Back in those days, there were no digital sales. So everything was about retail placement and being able to ship packaged goods to the retailers. So yeah, if we would have had smaller brands that didn’t quite catch on with the retailers and we didn’t get the orders, the launch orders that we needed at our existence, it could be a very different story.

GamesBeat: So, according to my research, you did almost all of the localization for Shadow Hearts?

Berry: Well, the final brush up.

So Shadow hearts was a very weird title where the Japanese publisher had commissioned the English. So they basically sent us what they said were final English files. But to be honest, the written English, it was just atrocious and had to be fixed and corrected quite a bit. And there was no consistent terminology. And even at the time, with us being new and just a small company with six people, we really didn’t have a full on localization department, and we were using what budget we had to outsource the localization of Wild Arms 4. So it basically came to me to go over that Shadow Hearts English script, fix everything. And they had even done the English voiceover and events, too. So after seeing the English script, I was really scared to hear the English voices that they told us were in the game.

But much to my surprise, the English voices were actually not just good, I thought they were excellent. They had apparently used a studio out of New York. And whoever that studio was, whoever the director was, must have known what he was doing. I could tell they did a lot of rewrites on the fly to try to fix the grammar issues and the terminology issues that I was seeing in the plain game script.

GamesBeat: So you not only have to fix the issues, but sync it up with what the voice folks had already done in New York?

Berry: Exactly. So the terminology issues … I think one of the monsters might have been spelled three different ways in the files and in pretty drastically different ways. I would first go and find the voice files and find the scene and listen to how they pronounced it, and then match it to that. Yes the voices couldn’t be changed. So everything else that was written had to be changed to match the voices as closely as possible.

GamesBeat: Do you still do any of this localization brush-up work?

Berry: I think the last couple titles that I did localization work on was Victorious Boxers: Revolution for the Wii. And I remember doing some Dungeon Maker: Hunting Ground for PSP.

Localization was some of the most rewarding work that I’ve ever done in the industry. I’ve done a lot of different jobs within the publishing model, and I would say the localization was probably the funnest, and one of the most rewarding, but I haven’t done anything on that front in almost 10 years. We have a fairly large localization team here, and they do seem to have a lot of fun. When trying to determine terminology or what the voice should be for this character, I do miss that creative aspect. It is a very fun part of the industry.