Xbox Series X specs revealed: Here’s what matters and why

Microsoft revealed more details about its upcoming next-gen console this morning, and that includes the full Xbox Series X specs. But while it’s always fun to stare blankly at a list of gigabytes and gigahertz, let’s dive in and pick apart what matters.

Here is the full list of the Xbox Series X specifications direct from Microsoft: 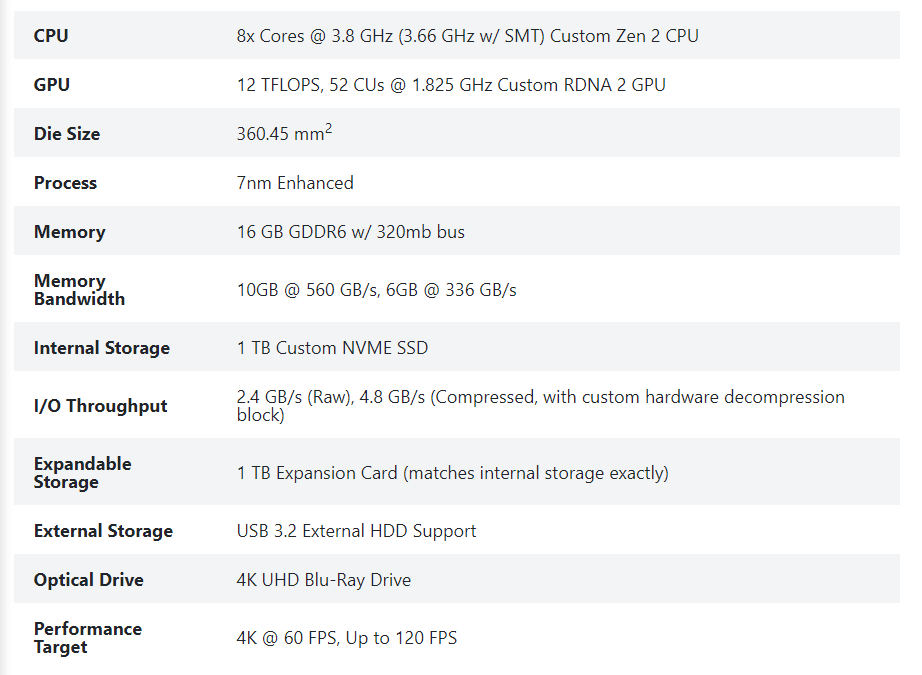 Above: Xbox Series X has got it where it counts, kid.

The most important features in this list are the CPU, the storage, and the GPU. Let’s break down each one.

The Xbox Series X has an AMD CPU that uses the company’s Zen 2 architecture. This means it uses an enhanced 7nm process that can cram 15 trillion transistors onto a chip about the size of the Xbox One X’s.

What does that mean? Hyperthreading (AMD calls it SMT) is the tech that enables a CPU to ingest data from two lanes. Think of the core as a mouth and the threads are the hands. With hyperthreading, one thread can actively feed the mouth while the other hand is getting the next bite ready.

Hyperthreading is not something that most games take advantage of — at least not yet. And that’s why developers have an option.

Expect most games through the first year or so to stick with 8 cores and 8 threads at 3.8 GHz. A Zen 2 chip with 8 cores at that clockspeed is going to chew threw most current-gen games with no issue. This is a massive upgrade over Xbox One and PlayStation 4.

Hyperthreading will then give Xbox a certain amount of futureproofing. The rest of the computing world has embraced multiple CPU threads, and it’s only a matter of time before games do the same. Especially with AMD’s high core-count CPUs with hyperthreading selling so well in the desktop market.

Storage is one of the most talked about aspects of the next-gen consoles. Even before Microsoft started talking about the Xbox Series X, Sony was talking up its next-gen solution to reduce load times.

Well, now we know what Microsoft is putting inside the box. It’s a 1TB custom NVME SSD. An SSD is a solid-state drive. That’s a bunch of superfast flash storage that doesn’t rely on a spinning disc like traditional hard drives. NVME means non-volatile memory express, and it’s a new interface that is capable of a higher data throughput than the old SATA interface.

We have NVME SSDs on PC, and for now, even that is overkill. No game maxes out the read speeds for even a SATA SSD. For reference, SATA 3 is capable of transfering about 550MB per second. NVME, meanwhile, can run as high as 3,500MB per second.

This is another example of Microsoft preparing the Xbox Series X to last for years. Games may not max out SATA today, but that was largely due to the criminally slow console HDDs (maybe 100MB per second at best) holding everything else back. Putting NVME in consoles should enable a whole new generation of games that don’t just load levels faster, but they should stream in data during the game faster as well.

What about external storage?

Using a super-fast NVME SSD inside the Xbox poses a problem, though. Most external storage solutions are too slow. This will make expanding space to save games expensive and, even worse, confusing.

Microsoft has an answer for this, though. It’s putting an expansion-card slot on the back that will accept a 1TB NVME SSD that is identical to the internal storage. This will ensure that games run exactly as they should whether they’re on an internal or external device.

But even this solution isn’t perfect. The Xbox Series X has full backward compatibility with Xbox One and also robust support for Xbox 360 and the original Xbox. Those games do not need such a futuristic drive.

Microsoft has an answer for this as well. You can plug in an external HDD to the system’s USB 3.2 port. This should give you access to massive amount of space for older games. And USB 3.2 is fast enough that you could even take advantage of the loading speeds of an external SSD.

The last major hardware pillar for Xbox Series X is the GPU. It has 12 teraFLOPS of power with 52 compute units running at 1.825 GHz. Again, what does all of that mean? It doesn’t matter too much.

It’s more important that it’s running on a custom version of AMD’s new RDNA 2 architecture. AMD hasn’t launched any RDNA 2 GPUs yet. But the first RDNA video cards are powerful and efficient. Their performance-per-watt is one of their most impressive attributes. And that means with console optimizations, developers may get some astonishing results out of RDNA 2.

Digital Foundry is already reporting those kinds of jumps in performance. A two-week-old port of Gears 5 running on Xbox Series X with minimal optimizations is already performing on par with a PC using an RTX 2080 from Nvida. That was a $700 GPU.