Aisera, a company developing a platform that automates operations and support tasks across IT, sales, and customer service, today announced it has raised $40 million in a series C round led by Icon Ventures. The startup says the funds, which bring its total raised to $90 million, will support product expansion and deployment, as well as go-to-market, marketing, and software development efforts.

When McKinsey surveyed 1,500 executives across industries and regions in 2018, 66% said addressing skills gaps related to automation and digitization was a “top 10” priority. According to market research firm Fact.MR, small and medium-sized enterprises are expected to adopt business workflow automation at scale, creating a market opportunity of more than $1.6 billion between 2017 and 2026.

Aisera offers products that auto-complete actions and workflows by integrating with existing enterprise apps, like Salesforce and ServiceNow. The company was founded in 2017 by Muddu Sudhakar, who previously launched e-discovery vendor Kazeon (which was acquired by EMC in 2009), big data startup Cetas (acquired by VMware in 2012), and cybersecurity firm Caspida (acquired by Splunk in 2015).

Aisera claims its platform can continuously learn to resolve issues through a combination of conversational AI, robotic process automation, and reinforcement learning. For example, Aisera can predict outages and send notifications to DevOps teams and customers. Moreover, the company claims its platform can detect patterns to predict service disruptions. 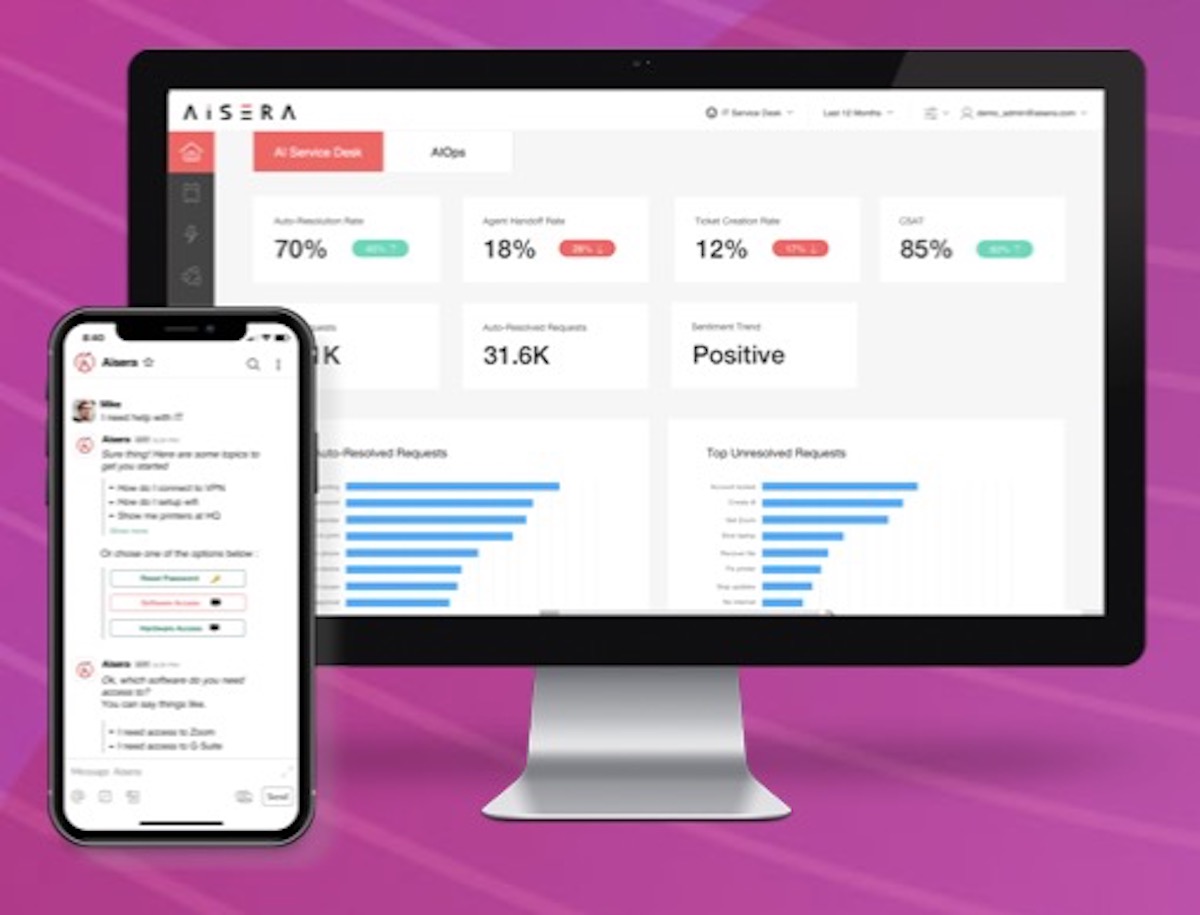 Aisera customers can choose from a library of prebuilt workflows and intents built for IT, HR, facilities, sales operations, and customer service applications. The platform offers out-of-the-box reports and dashboards for auditing, including auto-resolution metrics and the ability to discover the most-requested knowledge articles.

Aisera has a number of competitors in a global intelligent process automation market that’s estimated to be worth $15.8 billion by 2025, according to KBV Research. Automation Anywhere and UiPath have secured hundreds of millions of dollars in investments at multibillion-dollar valuations. Within a span of months, Blue Prism raised over $120 million, Kryon $40 million, and FortressIQ $30 million. Tech giants have also made forays into the field, including Microsoft, which acquired RPA startup Softomotive, and IBM, which purchased WDG Automation. That’s not counting newer startups like WorkFusion, Indico, Tray.io, Tonkean, AirSlate, Workato, Camunda, and Automation Hero.

But the funding comes at a time of significant expansion for Aisera. In addition to achieving year-over-year growth of 300% and a base of over 65 million users, the company says it has secured a number of new enterprise customers, including Autodesk, Dartmouth College, McAfee, and Zoom.

Aisera’s success is perhaps unsurprising, given the value proposition of automation. Ninety-five percent of IT leaders are prioritizing automation, and 70% of execs are seeing the equivalent of over four hours saved per employee, per week, according to Salesforce’s recent Trends in Workflow Automation report. Moreover, market research firm Fact.MR says the adoption of business workflow automation at scale could create a market opportunity of over $1.6 billion between 2017 and 2026.