The Five Reapers in Warhammer 40,000: Chaos Gate – Daemonhunters are not foes to be trifled with. They are large, powerful, and more than capable of ending your Strike Force if you go in without a plan. Each Reaper comes with a set of mechanics that make them uniquely difficult to take out, and Morgellus is no different.

Morgellus is a mighty Soul Grinder – part daemon, part machine, all nasty. He is a monstrous foe that, like all Reapers, towers above even your transhuman Grey Knights. He is armed with wicked claws, powerful guns, and the sheer heft that has been granted to him by Nurgle. Every step is a thunderous quake capable of rending the earth asunder. To a Grey Knight, however, he is merely in the way. 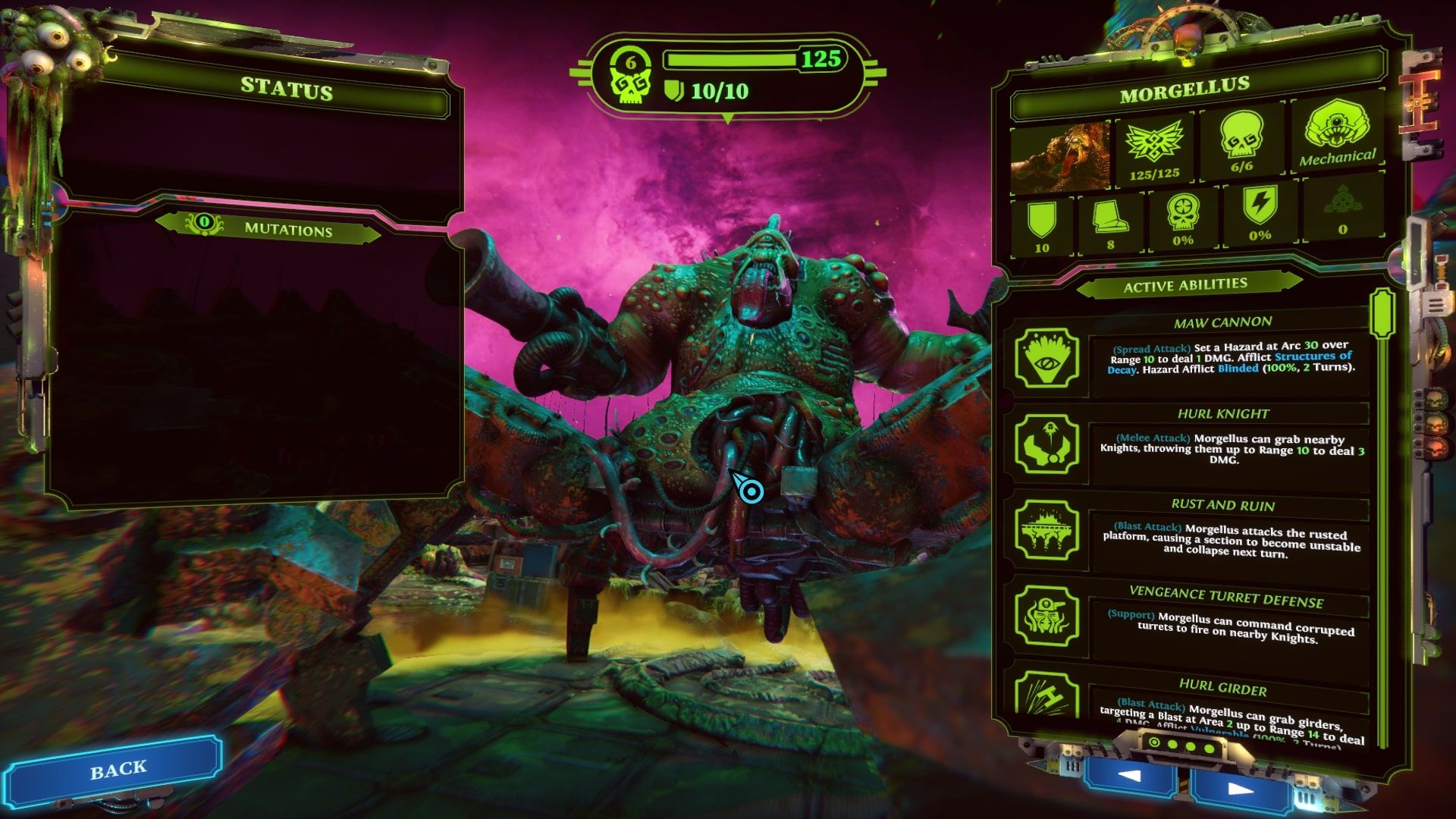 Morgellus, as is common for the denizens of Nurgle, is a burly chap. His HP pool is higher than any foe you’ve likely faced before, and that is supported by a reasonable armor value. Needless to say, getting through all of his bulk might take a while if you don’t have the right gear.

Not only that, but Morgellus is unnaturally fast. It can scuttle away from your Knights without much trouble, and thanks to the range of his guns, it isn’t unlikely for him to outrange you if you don’t bring a force that can stick to him like glue.

Interestingly, Morgellus has a Stun value, and this will need to be exploited if you want to take him down with any amount of haste. 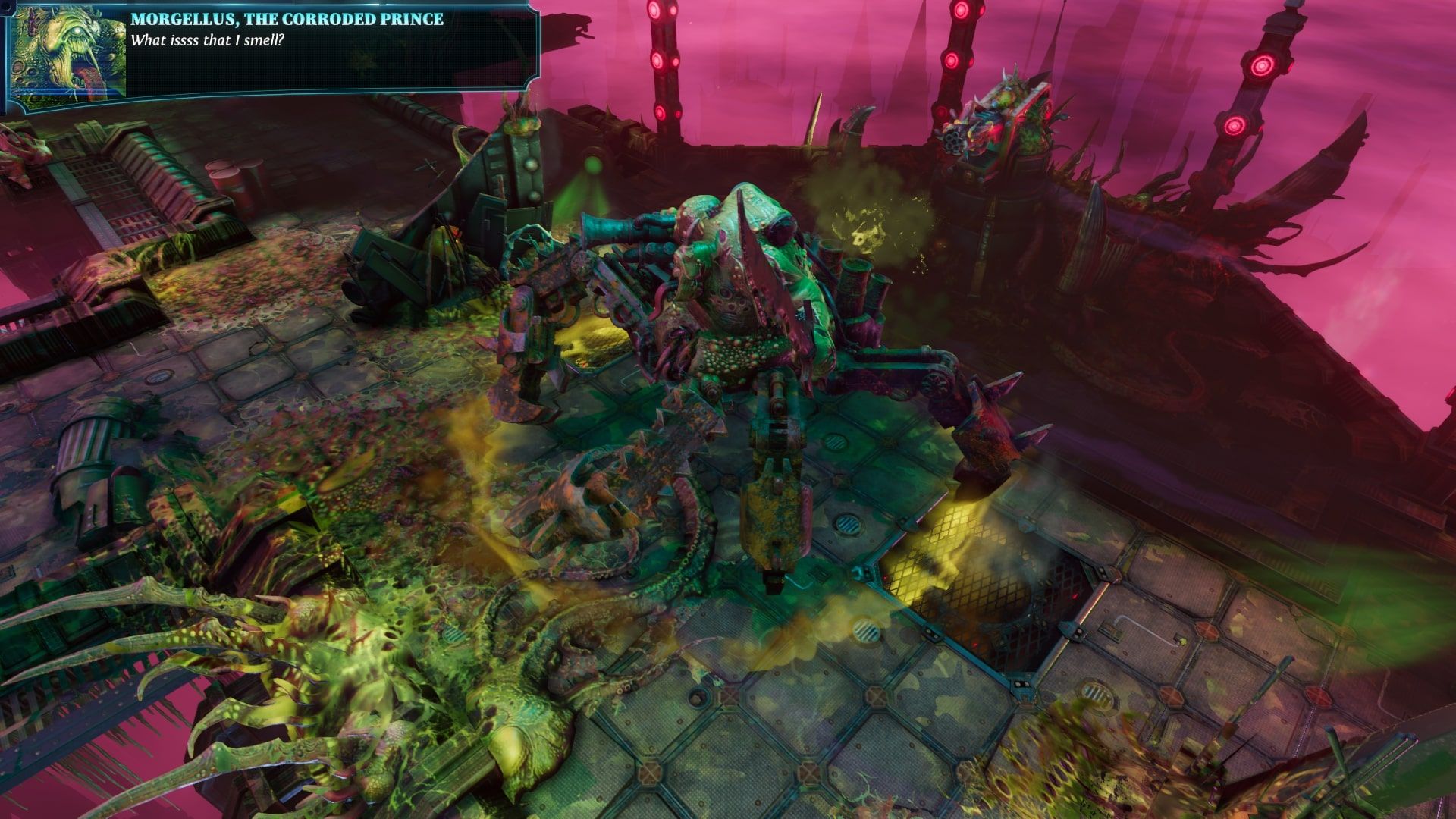 Morgellus is a threat at just about any range and is a master at disrupting your Strike Force. With access to Vulnerable and Blind, as well as the ability to launch your Knights away from him, he can be a pain to attack. Not to mention he will frequently strip away your Armor with his Rot Cannon. 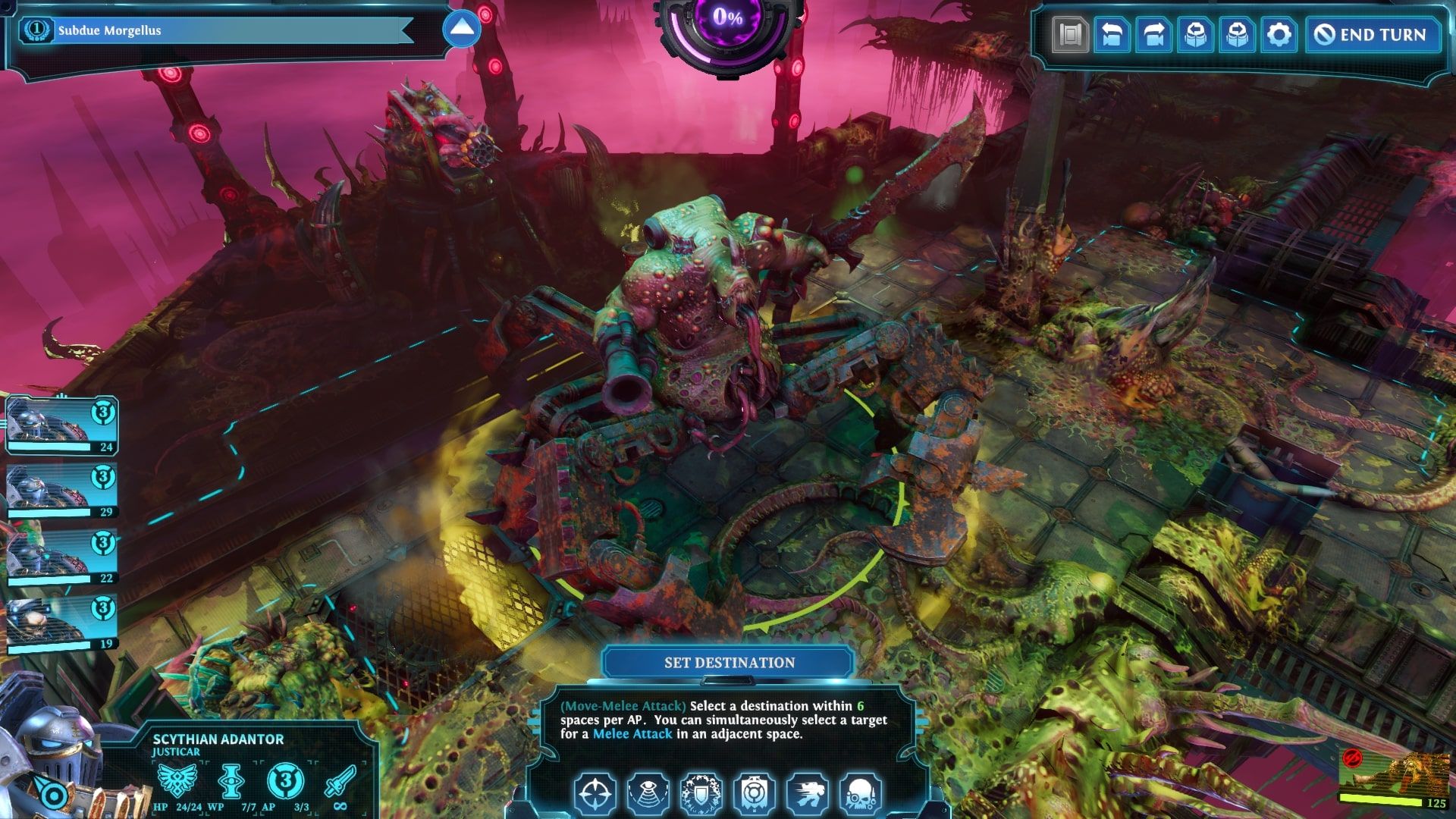 Like all bosses, Morgellus has several immunities that make him trickier to deal with. There are a few that are missing in his pool, however. Enraged and Vulnerable are the two big ones. Enraged allows a Knight with Provoke to draw aggro, which can help keep your squishier Knights alive. Vulnerable will help you deal more damage per attack.

Entropic Shield is the biggie here though. Entropic Shield makes Morgellus completely immune to Critical Hits. The only way to get around this is to break the generator on his back, which, funnily enough, requires a Critical Hit. Morgellus can be stunned if you hit him enough times, and they will allow you to get behind him and disable his shield. 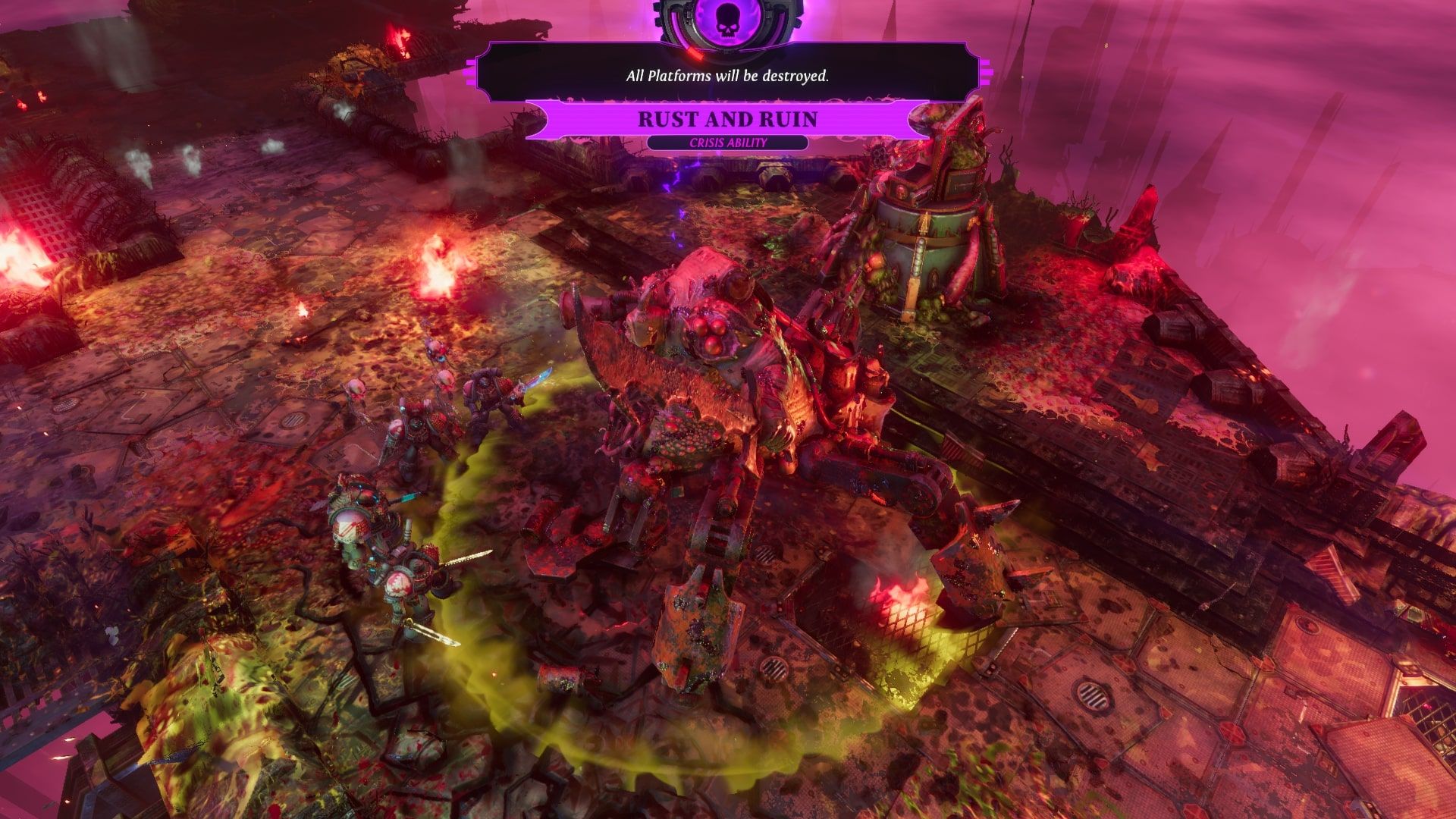 Claw Shielding forces your hand quite heavily. Whilst shooting Morgellus can work once you take out his claws, it can take a while to get to that point – especially with his Entropic Shield active. The best way to counter this is to use melee attacks since he has no defense. 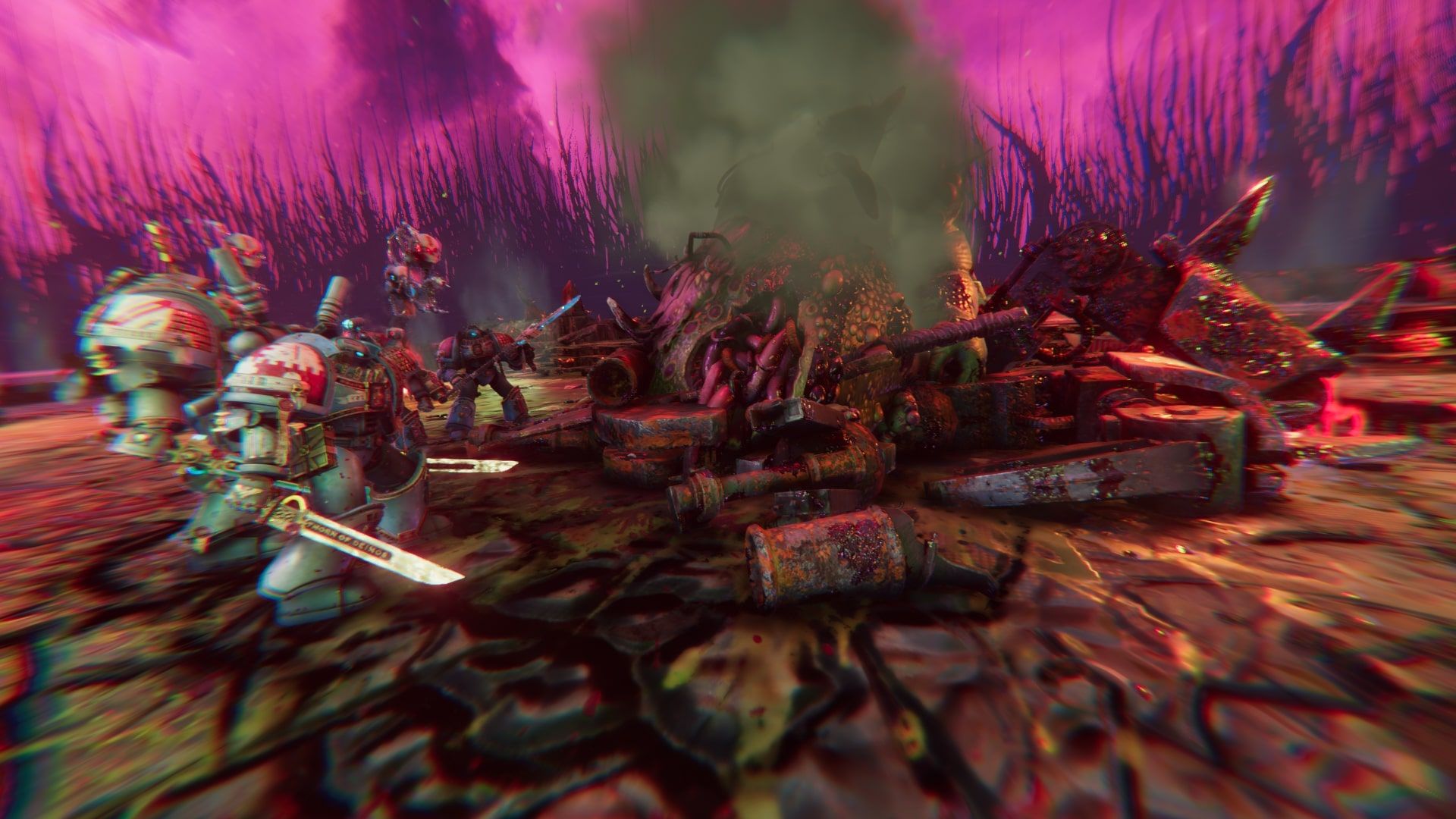 For this scrap, you want to be bringing Knights who can duke it out in close combat, or that can buff Knights. The Justicar is the perfect middle ground for this, as he can strike out in melee with Hammerhand and buff his team with Honor The Chapter. Not only that, but the Justicar can bring Provoke to draw aggro. A fantastic first pick.

The Paladin is one of the best melee units in the game. He isn’t very fast, but he can be used to stack Stun like nobody's business. This is very useful when fighting Morgellus. The Paladin doesn’t need much to work – just make sure you have upgraded his Force Strike to deal +1 Stun. Considering that’s a core upgrade, it shouldn’t be a problem.

Interceptor is your fast-moving beatstick. If the Paladin is there to stack Stun, then the Interceptor is there to land those juicy Critical Hits. All you need is Teleport and as many melee buffs as you can pump into him, and you are good to go. Hammerhand doesn't hurt either.

Finally, the Apothecary brings the squad together. Access to Warp Speed Biomancy can make the Interceptor deal more damage with Critical Hits, whilst Iron Arm Biomancy can increase the Stun damage your Paladin deals. With a decent Stun-based weapon, the Paladin can Stun Morgellus in a single hit – allowing him to repeatedly Stun Morgellus for guaranteed Critical Hits.

For equipment, you want to be on the lookout for Crit Damage, Stun, and Raw Damage. Crit Damage will be used in conjunction with your Paladin to deal bonus damage to Morgellus once he is staggered. Stun will be used to, well, Stun Morgellus in a single hit. The higher the damage number the better, naturally.

The golden duo. Gate Of Infinity lets your Knights get into combat without having to mess around with movement and wasting AP. Quicksilver can be applied to whatever Knight you want to increase their damage output. These should be your go-to.

You could bring Strength Of Spirit if you have an open slot, as the +50 percent Critical Hit Chance can go a long way once Morgellus’s Entropic Shield has been taken out. 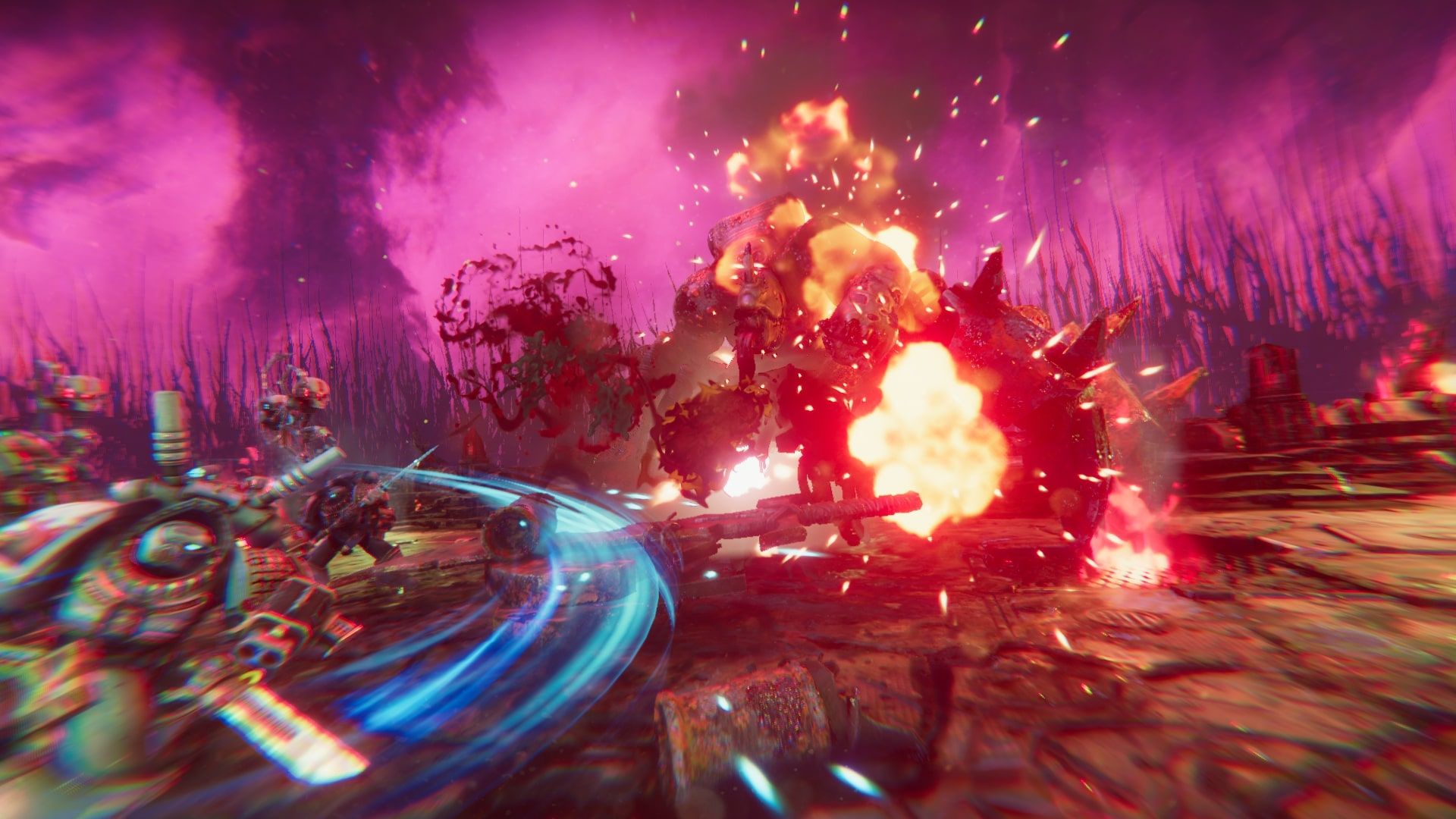 Morgellus can be taken out in a single round of combat if you have the equipment to punch through his health quickly. However, it is much more likely you will take him out in two turns – which is fine. Two turns are more than quick enough to prevent Morgellus from destroying the entire arena.

To start with, you want to buff your Knights. The Apothecary should use Iron Arm on your Paladin and Warp Speed on your Interceptor. If you have upgraded Battlefield Medicine to grant +1AP, then use this on your Paladin.

Your Justicar should then buff your Interceptor, granting +3AP whilst you use Quicksilver on the Paladin. This should give both your Paladin and Interceptor 6AP to play with, and this is our one-two punch.

Now you are buffed, Gate Of Infinity your squad to Morgellus. From here, attack with your Paladin. If you have enough Stun, you will be able to Stun Morgellus in one hit. If not, then combo this with your Justicar to push him over the edge. Once Stunned, move your Interceptor behind Morgellus and attack. Destroy his Entropic Shield.

This will leave Morgellus open to Critical Hits without relying on Stun. Despite this, continue to Stun Morgellus with your Paladin. Follow up with your Interceptor, and repeat this until both Paladin and Interceptor are out of AP. Make to target points that apply Vulnerable and disable his weapon systems.

Once this is done, use any remaining AP on your Justicar and Apothecary. Aim to use Hammerhand if you can for extra damage.

Assuming Morgellus survived, he will likely use Rust And Ruin before running away. If Morgellus had Stun damage still left over, you might Stun him on the retreat. Regardless, move your Knights (or use Gate Of Infinity again) into position and repeat. Remember to reapply any buffs that have fallen off.

Morgellus should go down on Turn Two, and there is a pretty decent chance you got out of that fight without taking any damage. Onto the next Reaper.