Warhammer 40,000: Chaos Gate – Daemonhunters: How To Defeat Malathian The Harvester

There are many enemies in Warhammer 40,000: Chaos Gate – Daemonhunters, some of them even ascend the rank of Boss. Of all of the enemies you face, however, only five have earned the title of Reaper. These enemies are powerful daemons of Nurgle, and it will take an awful lot of firepower, will, resilience, and soap, to purge the sector of their taint.

Malathian The Harvester is a Reaper who is tied to the Mortus strain of The Bloom. He is a Great Unclean One who has tormented the Imperium Of Mankind for centuries. He has even slain Grandmasters in single combat – a feat few beings could claim. His strength in combat is surpassed by his knack for staying alive. It’s going to take a big stick to beat this one down. 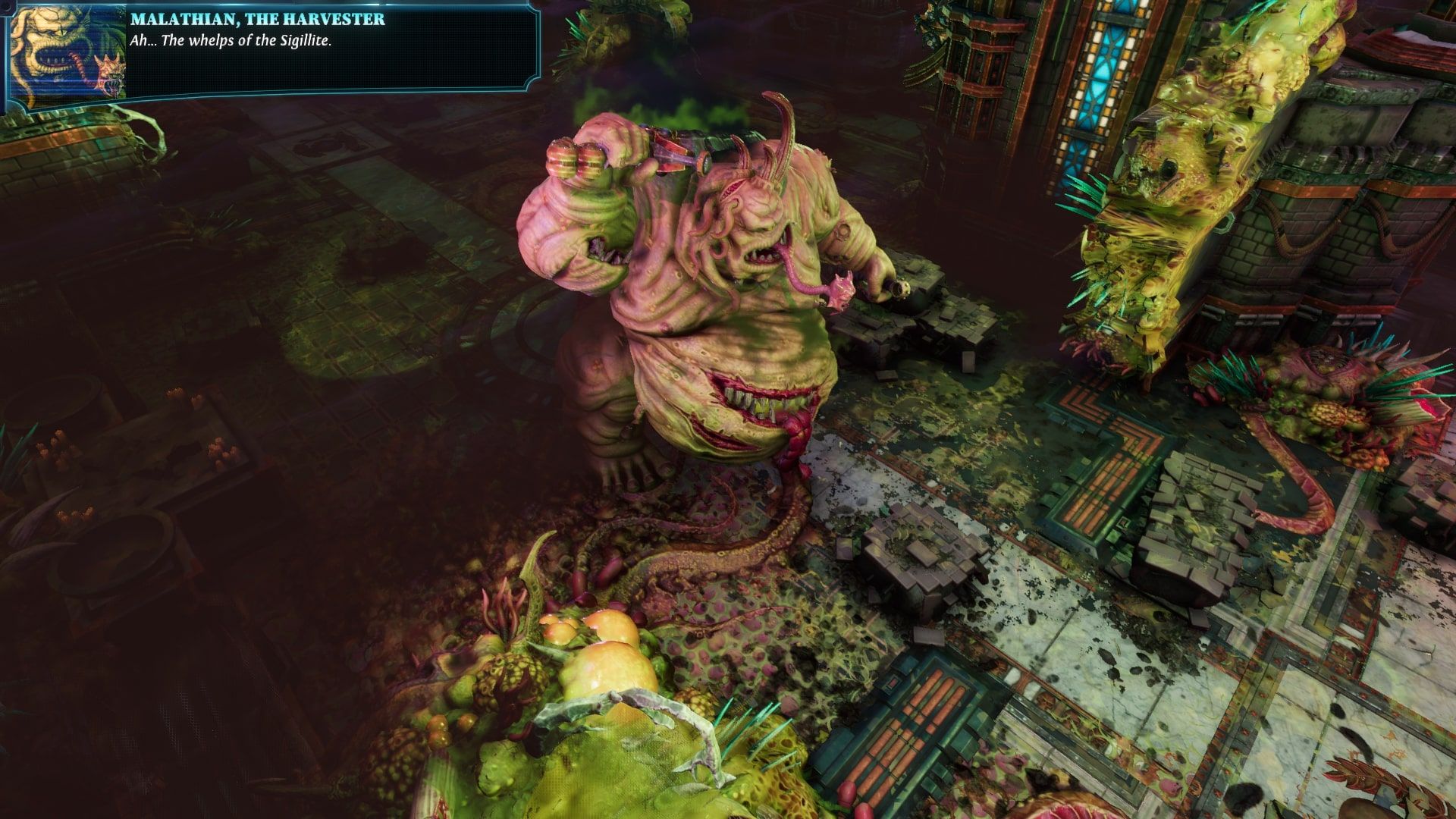 Malathian is big, he’s slow, and he has a lot of HP. He has 0 Resistance, making Afflictions easier to land, although he is immune to a fair few of them. His Critical Hit Chance is non-existent, which stops him from spiking you, and he has no armor.The lack of armor, however, is counteracted by the fight's Mechanics, and Malathan can stack an awful lot of Armor during this fight, making him much tougher. 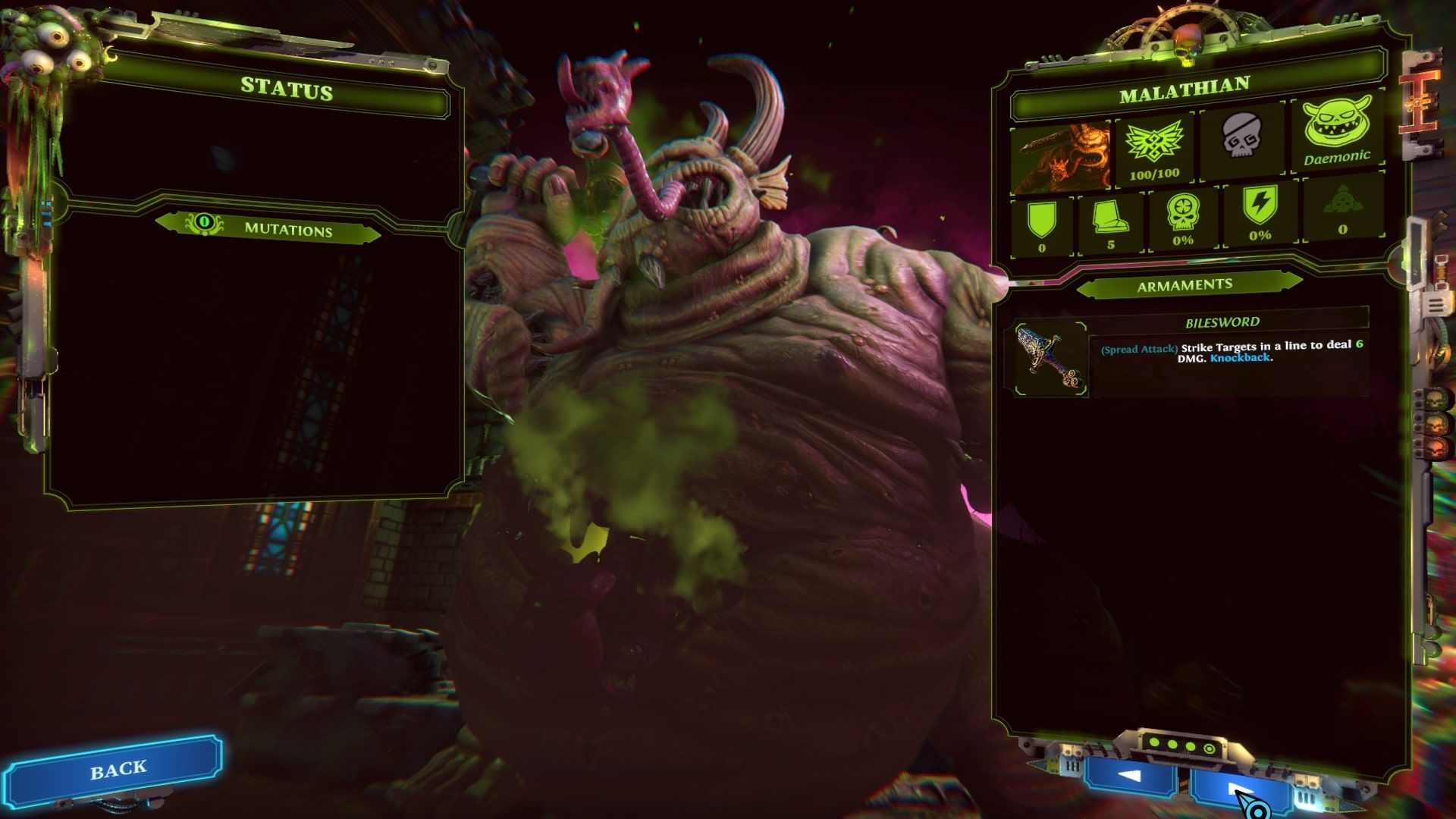 Being a Greater Daemon of Nurgle, Malathian is no slouch in combat. He is more than capable of slaying even the mightiest of Knights if you give him the chance.

Bilesword is a potent attack with enough punch to kill a less durable Knight in two or three hits. The Knockback is less of an issue as melee Knights can approach Malathian and Attack using a single AP. The existence of this attack forces one of two things – either you kill him before he uses it, or you bring healing to keep your Knights alive. 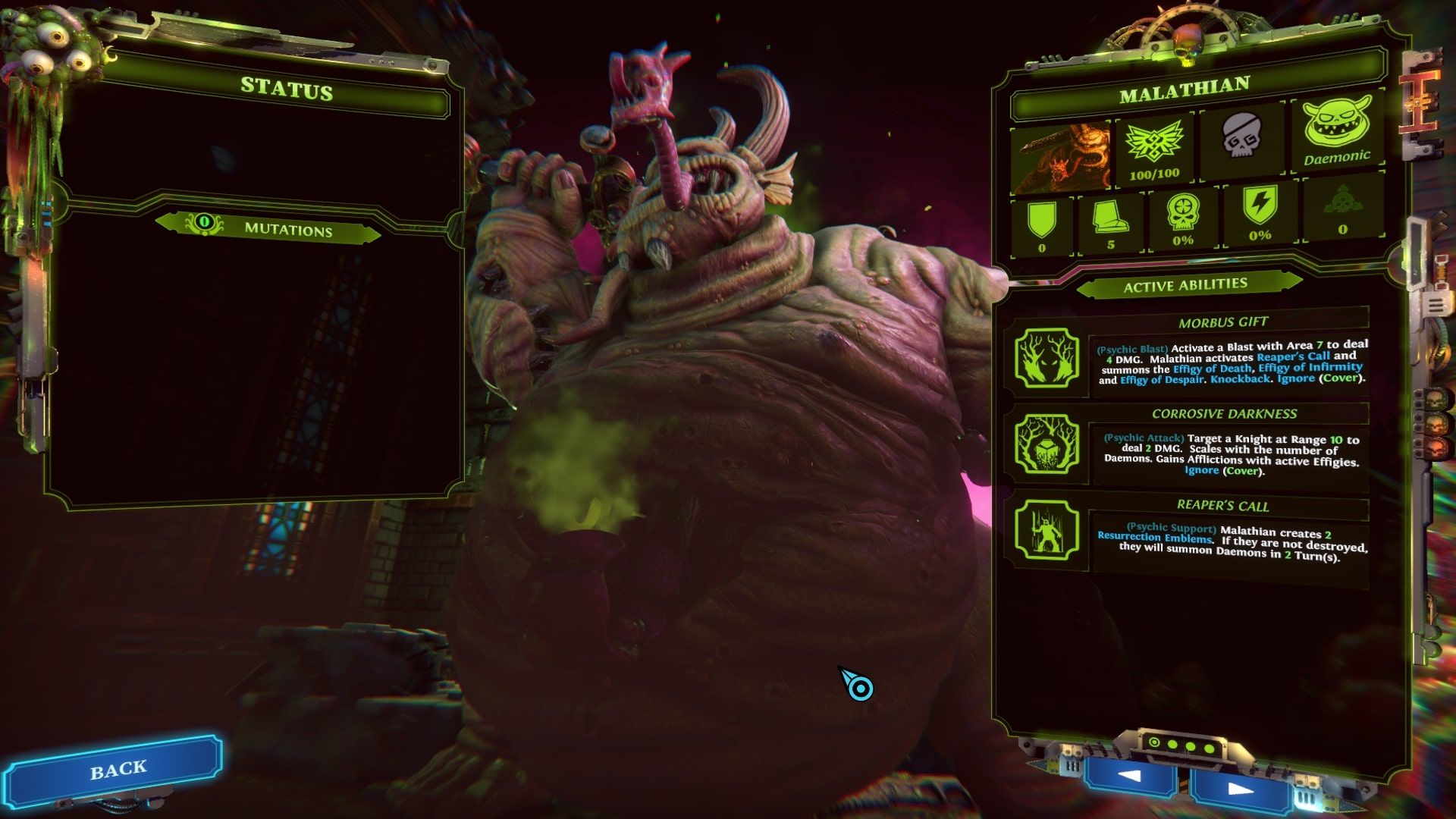 Like most Great Unclean Ones, Malathian is a potent Psyker capable of utilizing the infinite power of the Warp to crush his foes.

Malathian is a beastly Psyker who can scale to a point of instant death. Morbus Gift deals medium damage over a shockingly large area. The real strength of this attack comes from the summoning of three Effigies. These Effigies synergize with some Malathian’s other abilities, making this attack extra dangerous.

Corrosive Darkness is Malathian’s nuke. It doesn’t deal much damage at first, but if you don’t tackle the numerous summons Malathian brings to the table, then Knights will be killed in a single cast. If this happens, the fight is over as it’s very unlikely you will be able to come back from such a mistake.

Reaper’s Call is Malathian’s least dangerous attack – at first. It doesn’t deal damage, but it will cause Corrosive Darkness to grow in strength once the Emblems start summoning Daemons. You have two turns to deal with it, so either burn Malathian down before it matters or spend time destroying them. 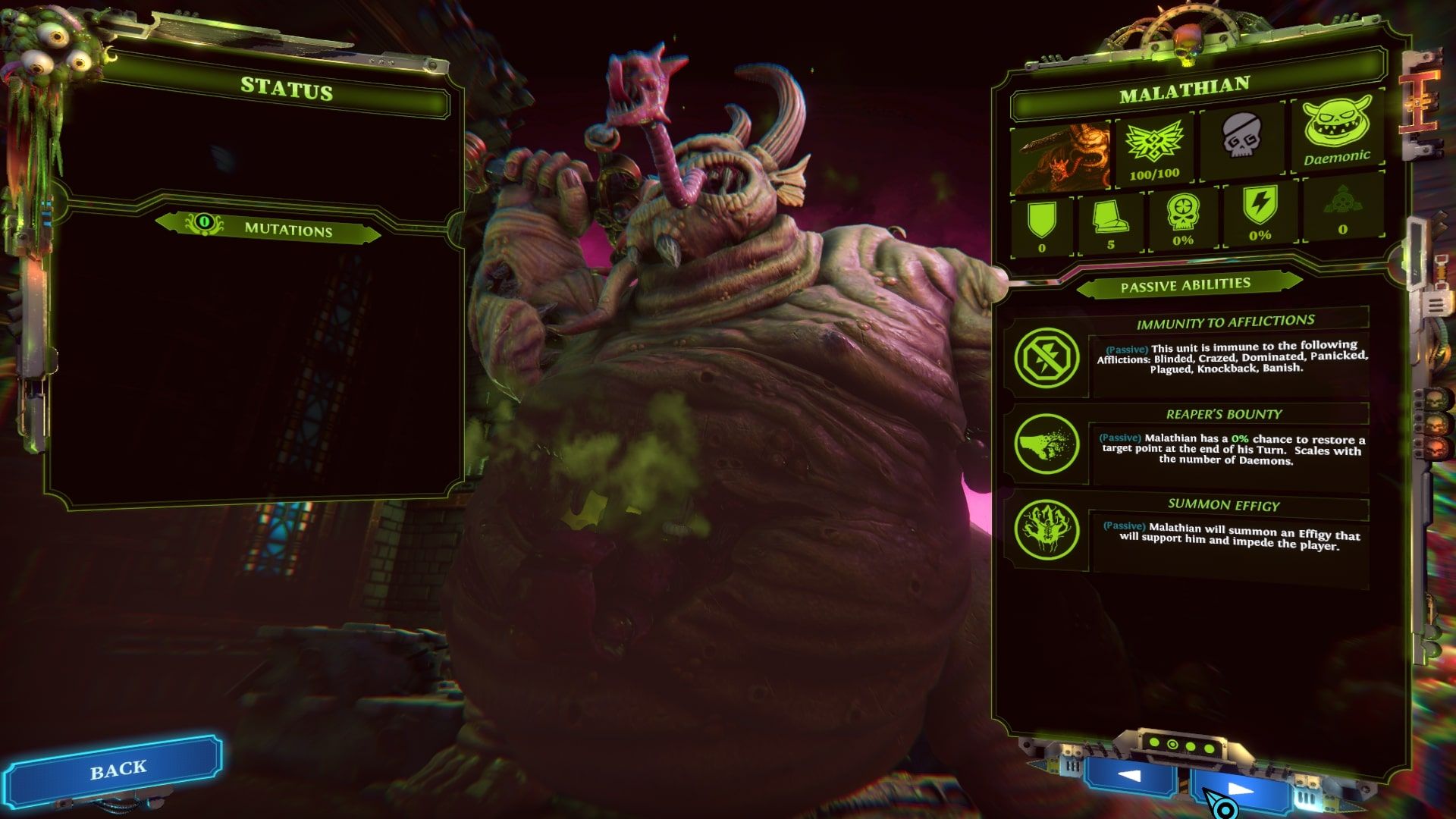 Being a big lad, Malathian has a bunch of blessings and passives that make him even harder to deal with.

Malathian’s Passives are a pain to deal with but are mostly managed by keeping on top of his summons. His Immunities prevent you from cheesing Malathian, although he is noticeably weak to Vulnerable and Bleed.

Reaper’s Bounty makes it so Malathian can restore his lost body parts and abilities. This percentage scales with the number of Daemons, so keep that number low to ensure your damage sticks.

Summon Effigy is a pain as it makes Malathian harder to deal with. You can’t exactly stop this from going off, so kill Malathian or destroy the Effigy when it appears. 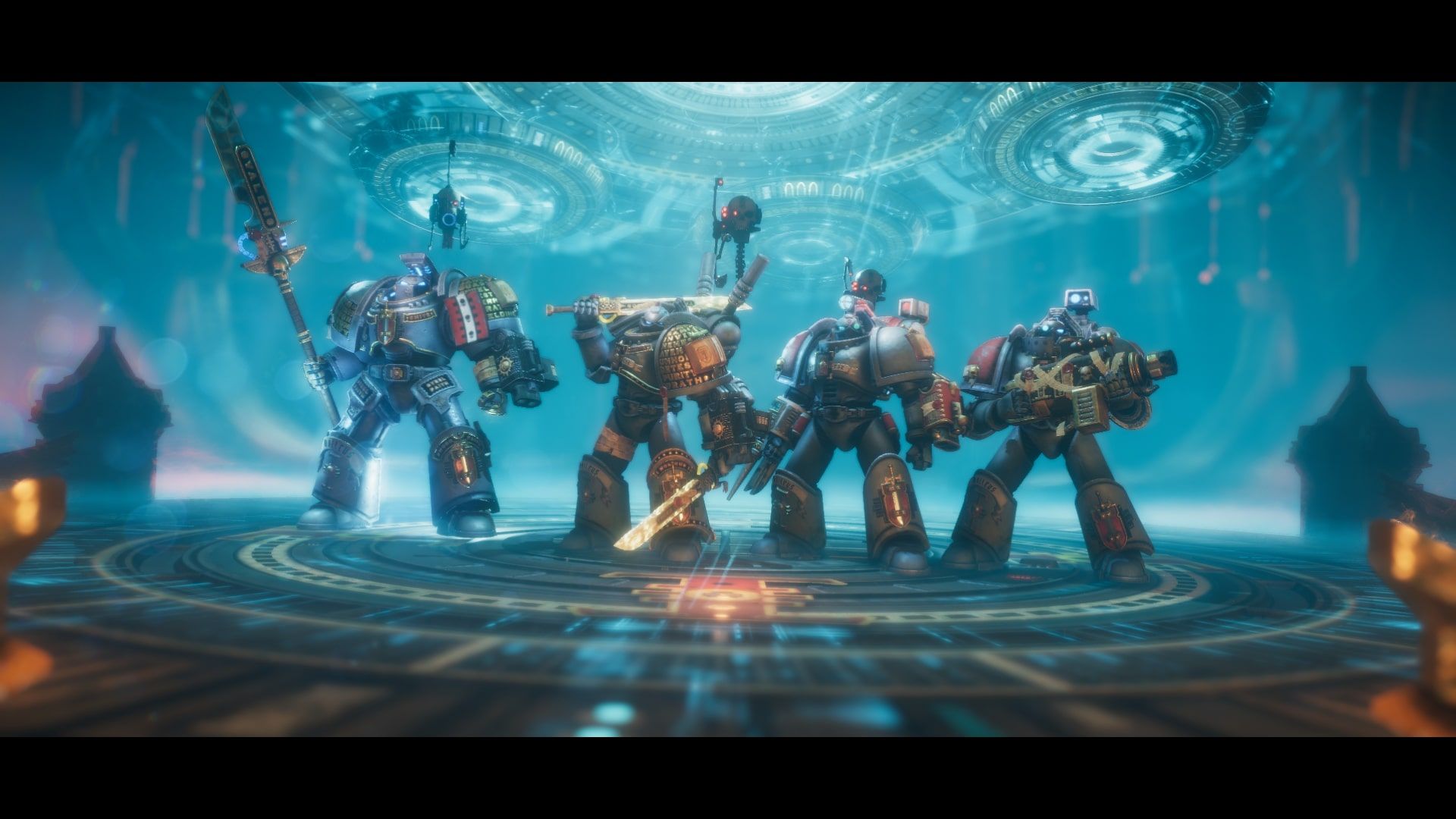 Preparing for Malathian is imperative, as his abilities can very quickly overwhelm you if you go in blind. You will need to bring your best Knights if you want to come out on top.

For squad composition you will want to bring:

This squad is incredibly balanced and is more than capable of killing Malathian without much hassle. It leverages several powerful effects to lay the smackdown. It takes advantage of the Interceptor’s amazing melee damage and the supportive abilities of the Apothecary and Pugator. With the right abilities, you can kill Malathian in a single turn.

Alternatively, you could bring this instead:

This loadout is incredibly cheesy but undeniably effective. This squad once again relies on the overwhelming power of the Interceptor and the incredible support the Justicar can bring to the table. This squad can easily kill Malathian in a single turn if kitted out correctly.

Bringing the right classes to the table is only half the battle. You will need to have the right skills unlocked to get the synergies going.

Honor The Chapter lets a Justicar spend 1AP and 2WP to grant any Knight, anywhwere, +3AP and +1WP once fully upgraded. This exchange is game breaking, as you are tripling your spent AP, giving you more activations in any given turn. The amount of AP gained functionally doubles a single knights available actions. This can even stack with other Justicars and other forms of AP transfer, like Quicksilver.

Sanctified Kill Zone is an ability that will easily pay for itself over the course of a battle. It applies Vulnerable to any enemy hit by the AOE. Vulnerable increases any damage dealt to an afflicted target by 2. Considering how many attacks we are going to lay into Malathian, Sanctified Kill Zone's bonus damage will equate to roughly a 20 percent of Malathian's total HP.

Finally, Warp Speed Biomancy increases the targets Movement Speed and Critical Hit Damage. Of the two effects, the bonus Crit Damage is the most important. Our main damage dealer, providing he has Critical Hit Chance in his kit, will benefit greatly from the boost.

For Stratagems, there are a few to consider based on how likely you think you are to outright murder Malathian in a single round of combat. Quicksilver and Gate Of Infinity are the two that give the most mileage for an OTK. If you are concerned you won’t have the damage, then bringing Tide Of Shadows will prevent Malathian from stacking Afflictions on your Knights, which is handy.

Because Malathian will generate Armor as he takes damage, it is vitally important you bring weapons that have Armor Pierce. This can be found on all manner of weapons, and it is typically tied to Force Strike or Psybolt. For example, the Thorn Of Deimos, a Master Crafted pair of Falchions that deal great damage and ignore armor when using Force Strike.

In addition to this, a suit of Power Armor that gives bonus WP will allow your Interceptor to spam Force Strike – which is a must. 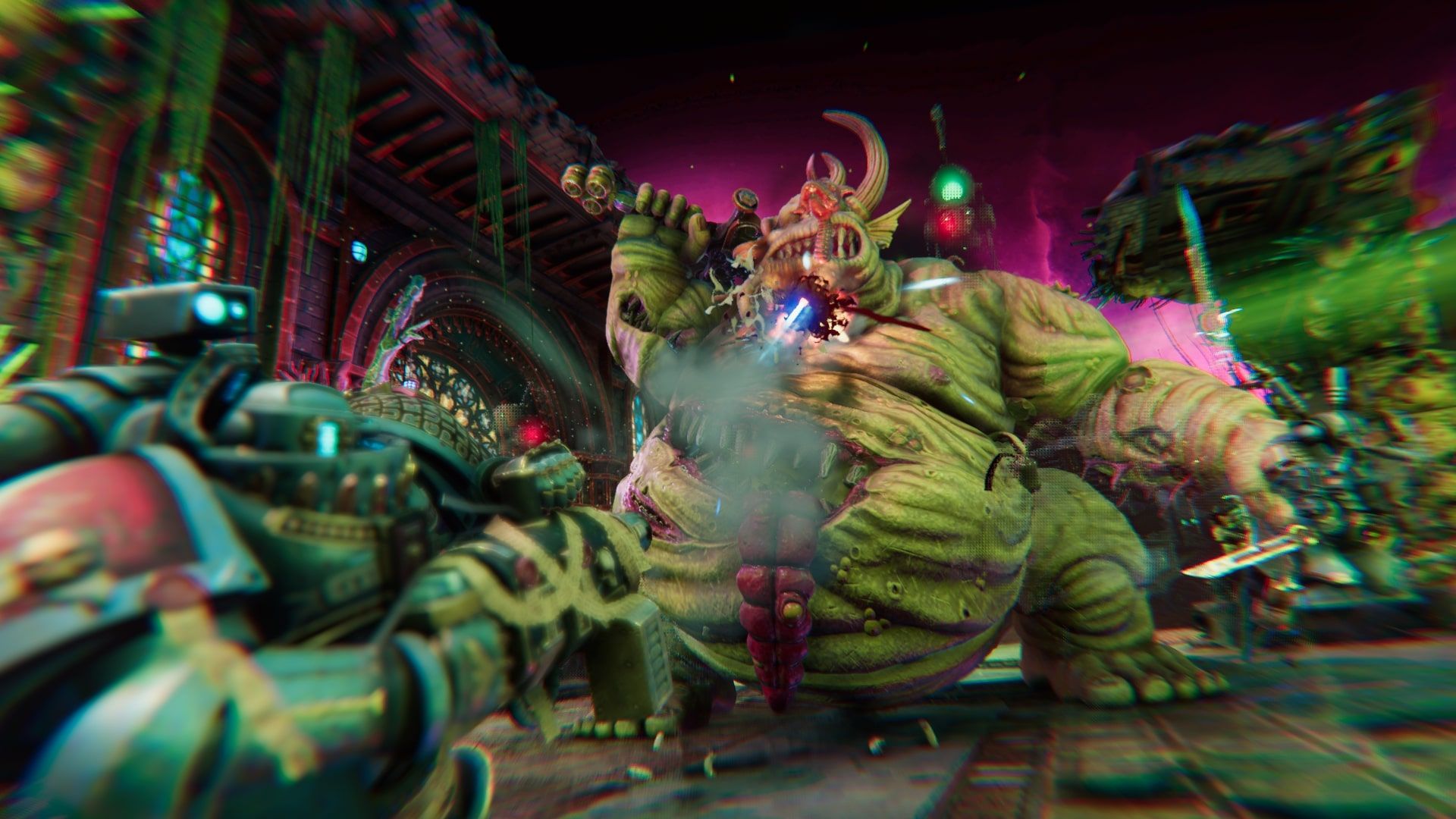 The plan for this fight is to kill Malathian before he gets a turn in. This is entirely possible thanks to the innate power of the Interceptor and the borderline broken support abilities granted by the Justicar specifically.

The vast majority of your damage will come from your Interceptor, and your priority should be to give him the hardest-hitting weapon you have available that also has Armor Pierce attached to Force Strike.

If you are running the balanced squad, then you want to use Gate Of Infinity to get as close to Malathian as you can. Use Honor The Chapter, Quicksilver, and Warp Speed Biomancy on your Interceptor. Cast Sanctified Kill Zone to make Malathian Vulnerable. Then, have your entire squad, apart from the Interceptor, attack Malathan. Use Hammerhand and Astral Aim if you have if available.

As Malathian takes damage, he will start to automatically summon Effigies once his HP drops roughly 20 percent (he will do this every increment). He will also gain an increasing amount of Armor. The reason our weaker characters are attacking first is so you can deal as much damage as you can before his armor becomes practically insurmountable.

Once you have exhausted your AP, activate your Interceptor and burn all 8 of your AP on Force Strike. This should deal anywhere between 6-10 damage per hit – more with a Critical Hit – and providing you are running the right weapons, will also ignore his Armor allowing you to deal HP damage.

As Malathian loses HP, he will summon more Effigies and even knock your squad back. This isn’t an issue, just get back into melee range and keep swinging. He will die in a single turn.

If you are running the triple Justicar build, this fight is even easier. Use Honor The Chapter three times on your Interceptor, plus Quicksilver. This will give your Interceptor a whopping 14AP, and this will be enough to kill Malathian – assuming you have the AP to support the repeated Force Strike usage.

As before, make sure you activate your Justicars first to scrape extra damage before Malathian starts stacking armor.

With Malathian dead, you are free to move on to the other four Reapers.