Digital Extremes warned us that we’d need to invest in the Necramech system, and with Operation: Orphix Venom, those that have modded their own Necramech will reap the rewards of heeding that warning.

The Orphix are Sentient serpents that have figured out a way of disabling a Tenno’s connection to their Warframe. Yes, that sounds pretty bad, but the good news is that Necramechs get around this disabling field allowing you to destroy the Orphix thanks to your scary, skull-faced mecha.

To get through Operation Orphix completely you’ll need a Necramech of your own. You can get away with using one of the loaner Necramechs that are scattered on the ground, but completing the higher difficulty levels will require an appropriately tricked-out Necramech with all the right mods.

Let’s go over the finer points of Operation: Orphix Venom before we discuss the right Necramech for the job.

How To Start Operation: Orphix Venom 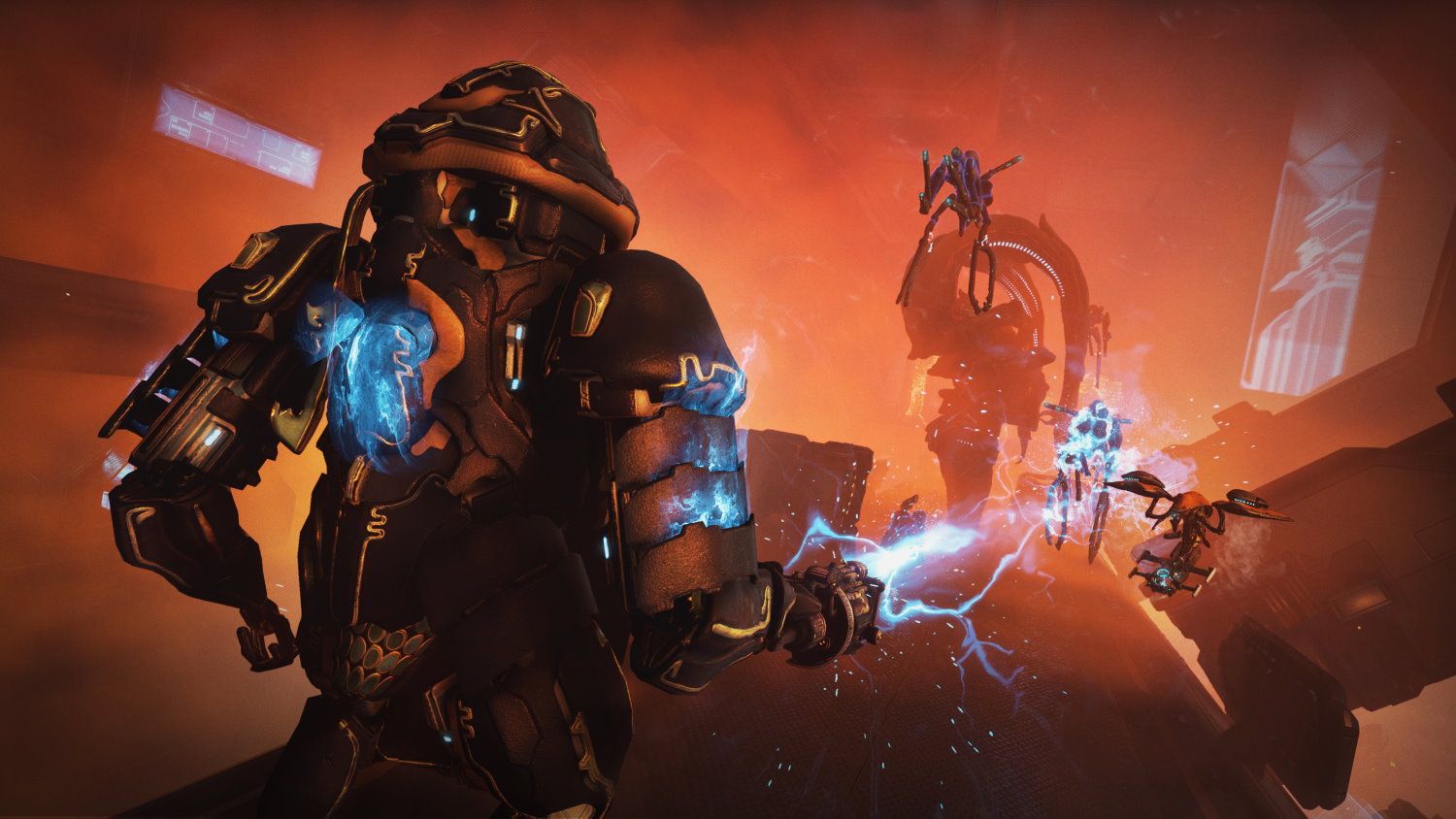 You’ll need to have completed The War Within and the Heart of Deimos quests before being able to access Orphix Venom, so go do that now. Once done, you just need to click from the Operation: Orphix Venom icon in your lander to start the mission.

There are three tiers to the operation, starting with regular, then Advanced, and finally Endurance. On regular difficulty, you can probably get away without your own Necramech as there are numerous Voidrig Necramechs scattered around the map which you can transfer into at your leisure. Note these are completely un-modded Necramechs so their power wanes as you go into Advanced and become next to useless by the time you hit Endurance.

How To Kill An Orphix 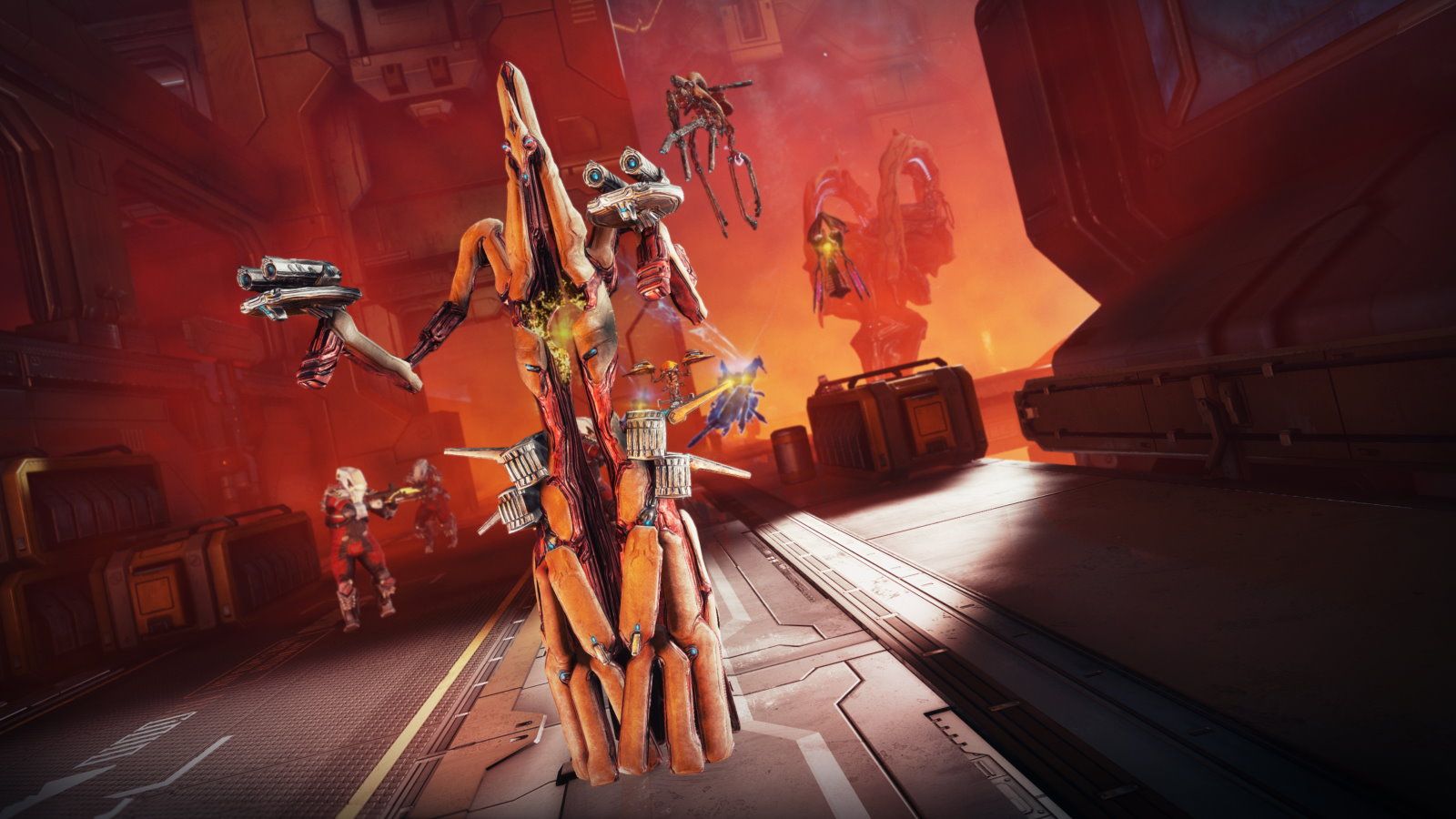 As the name suggests, the point of each mission is to kill as many Orphix as you can in a Survival-style mission. As you kill Orphix and other enemies, your score will increase, and each Orphix killed will give you a Phasic Cell at the end. You’ll be able to turn in this event currency to Father to get exclusive rewards and obtain the new Lavos Warframe.

Often an Orphix will get to half health and then spawn some more Resonators. If this happens, just kill the Resonators again to reveal the Orphix’s weak spot.

Note that there’s a “Sentient Control” percentage on the left side of the screen underneath your Orphix kill counter. If this reaches 100%, the mission is over as no more Orphixes can be killed. You won’t fail the mission, but you’ll lose out on any more possible rewards.

The maximum number of Orphix’s you can kill on regular and Advanced difficulty is 24. On Endurance, you can keep going until 36 are killed. 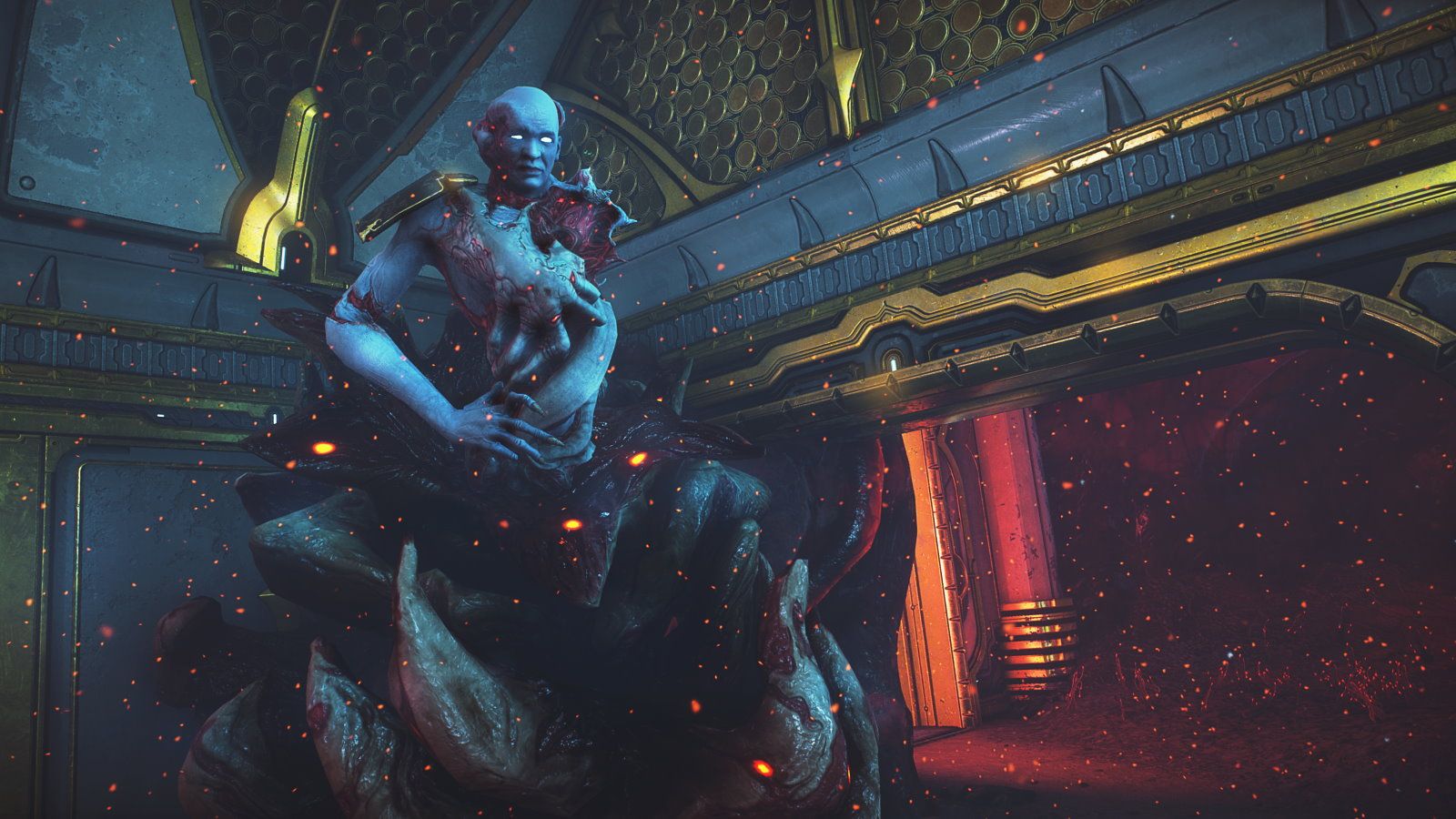 Besides periodic bonuses of Endo as you kill Orphix, each one killed with net you a Phasic Cell. Turn in Phasic Cells with Father to get exclusive rewards, which include blueprints for the new Lavos Warframe and its signature weapon, the Cedo shotgun.

Besides that, Father will also sell a selection of Necramech mods, making Operation: Orphix Venom the perfect mission to farm in order to build up your Necramech. You can also get rewards that were only previously available during Scarlet Spear, such as the Cetic Lacera and Basmu weapon blueprints.

You’ll also obtain some unique rewards for reaching a certain score at each difficulty level. Obtain a score of 500 on regular difficulty to be rewarded an emblem, a score of 1000 on Advanced to get an Ayatan Hemakara Sculpture, and completing Endurance with a score of 2000 will get you an Aura Forma and the Mausolon Supulchrax skin.

How To Mod Your Necramech For Endurance Difficulty 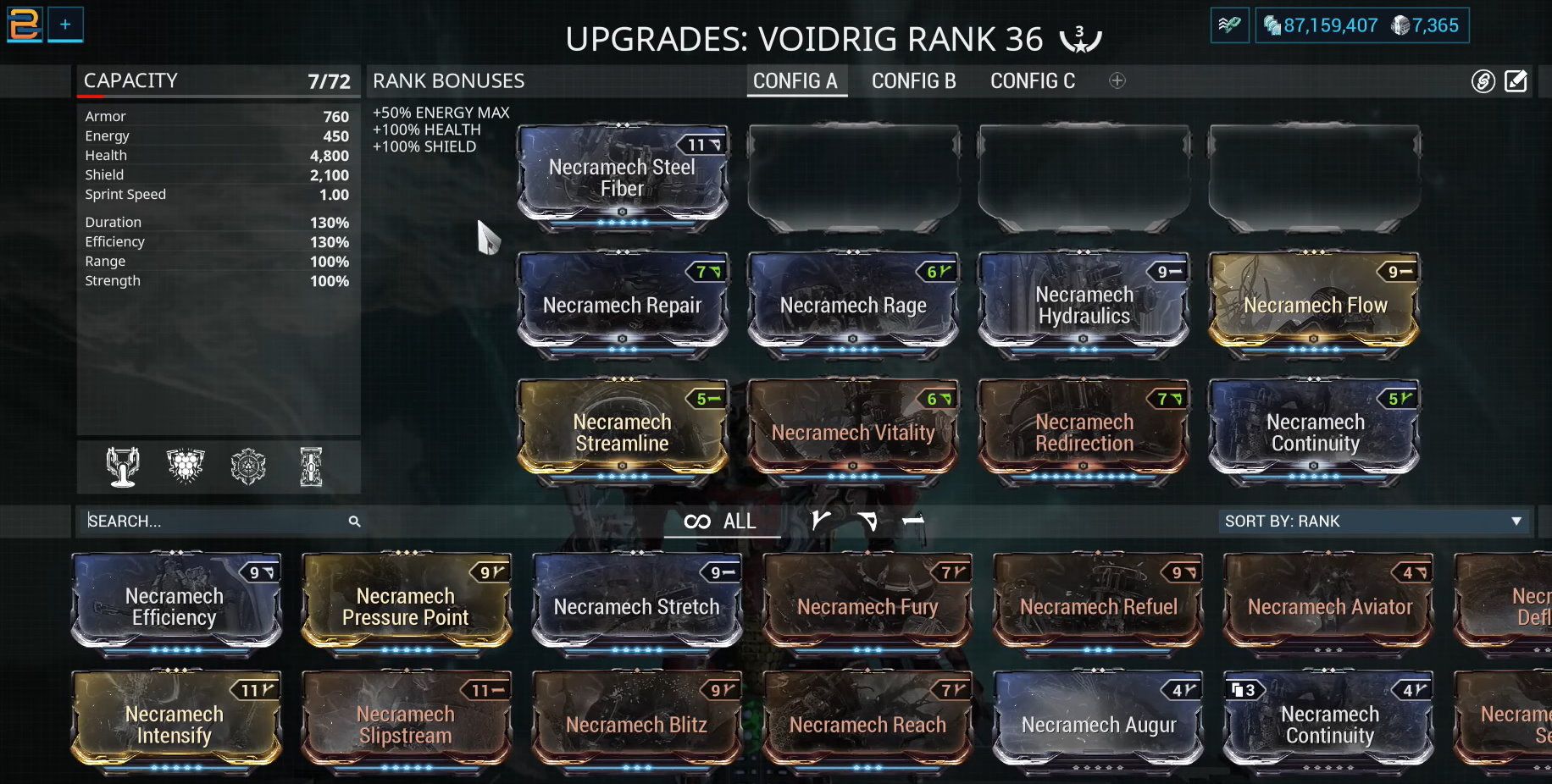 Of the two Necramech’s available, the Voidrig is by far recommended for taking into Endurance difficulty as its Storm Shroud ability will prove to be essential for surviving the Sentient onslaught. Bonewidow’s Shield Maiden isn’t terrible as far as defensive abilities go, but Sentients will attack from all directions and Shield Maiden can only protect you from a short angle.

As is so often the case in Warframe, high-level content requires a lot of health and armor, so Brozime recommends Necramech Vitality, Redirection, and Steel Fiber to start. Necramech Continuity, Streamline, and Flow will keep your Storm Shroud going for as long as possible, while Necramech Rage will help with energy consumption. Necramech Repair further boosts your Voidrig’s effective health pool, while Necramech Hydraulics can help get your Voidrig to some of those hard to reach places.

As for weapons, the Mausolon is the best Arch-gun in the game and it comes with your Voidrig, so might as well use it. Mod your Mausolon the same way you would any other Arch-gun with a focus on enhancing both critical and status damage. 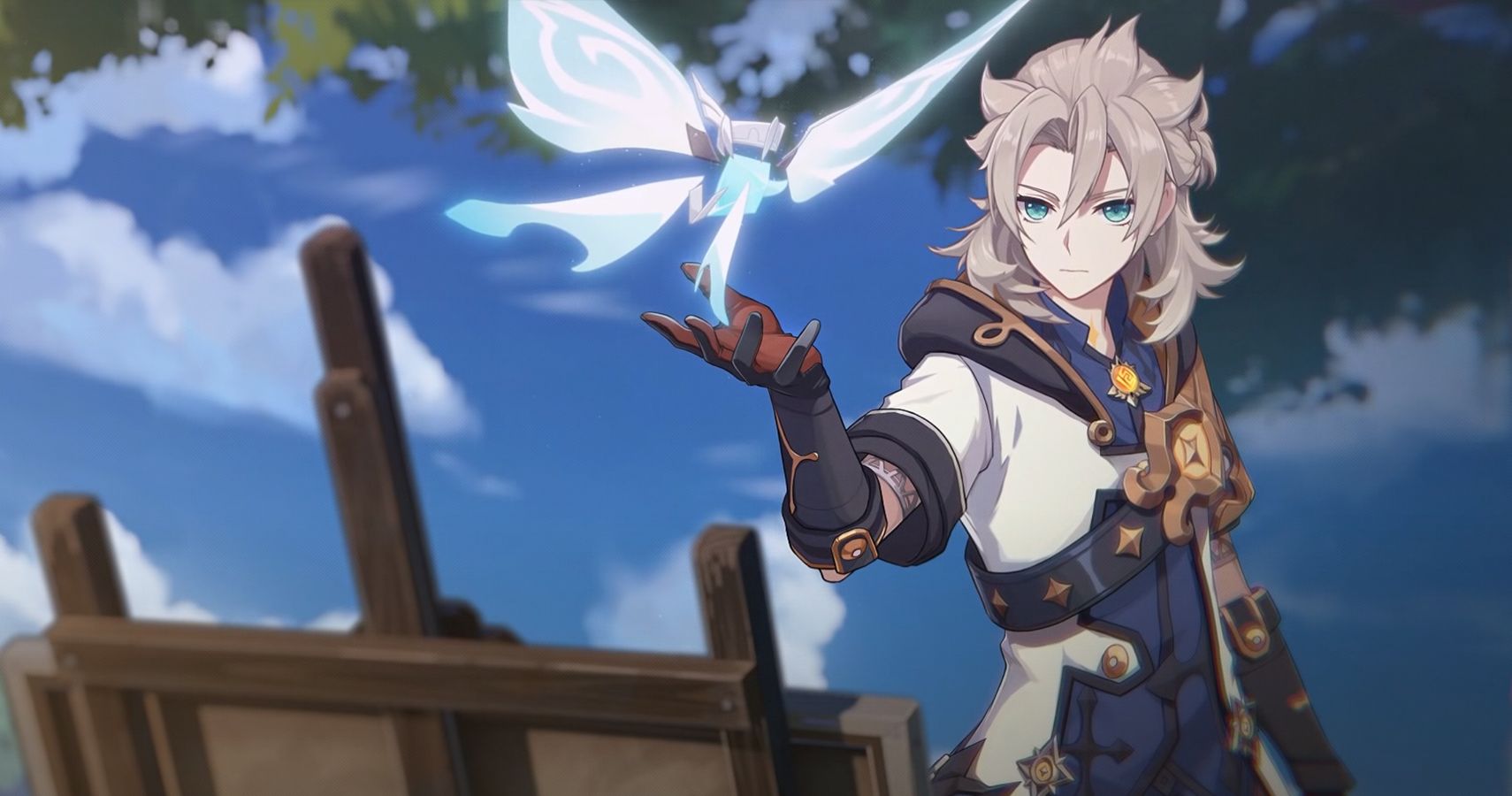 Related posts:
Best News
AMD Says Next-Gen Console Shortages Will Continue Until At Least The Second Half Of 2021
February Stadia Pro Games Announced, Includes Enter The Gungeon
Turn Your Apple TV Into A Nintendo Famicom With This Silicone Case
cheap medrol uk without prescription
where to buy generic proscar supreme suppliers without prescription
Recent Posts
This website uses cookies to improve your user experience and to provide you with advertisements that are relevant to your interests. By continuing to browse the site you are agreeing to our use of cookies.Ok