Home » News » V Rising: How To Find And Defeat Leandra The Shadow Priestess

V Rising: How To Find And Defeat Leandra The Shadow Priestess

As you progress throughout V Rising, the enemies you encounter will grow in power and difficulty. The Dunley Farmlands is a step up from Farbane Woods, and some certain sections and locations contain some especially vicious foes. Leandra The Shadow Priestess rules over such an area and commands an army of Undead to protect her.

This guide will teach you where to find Leandra The Shadow Priestess, the best strategy for both reaching and defeating her, and what rewards are on offer should you emerge victorious. 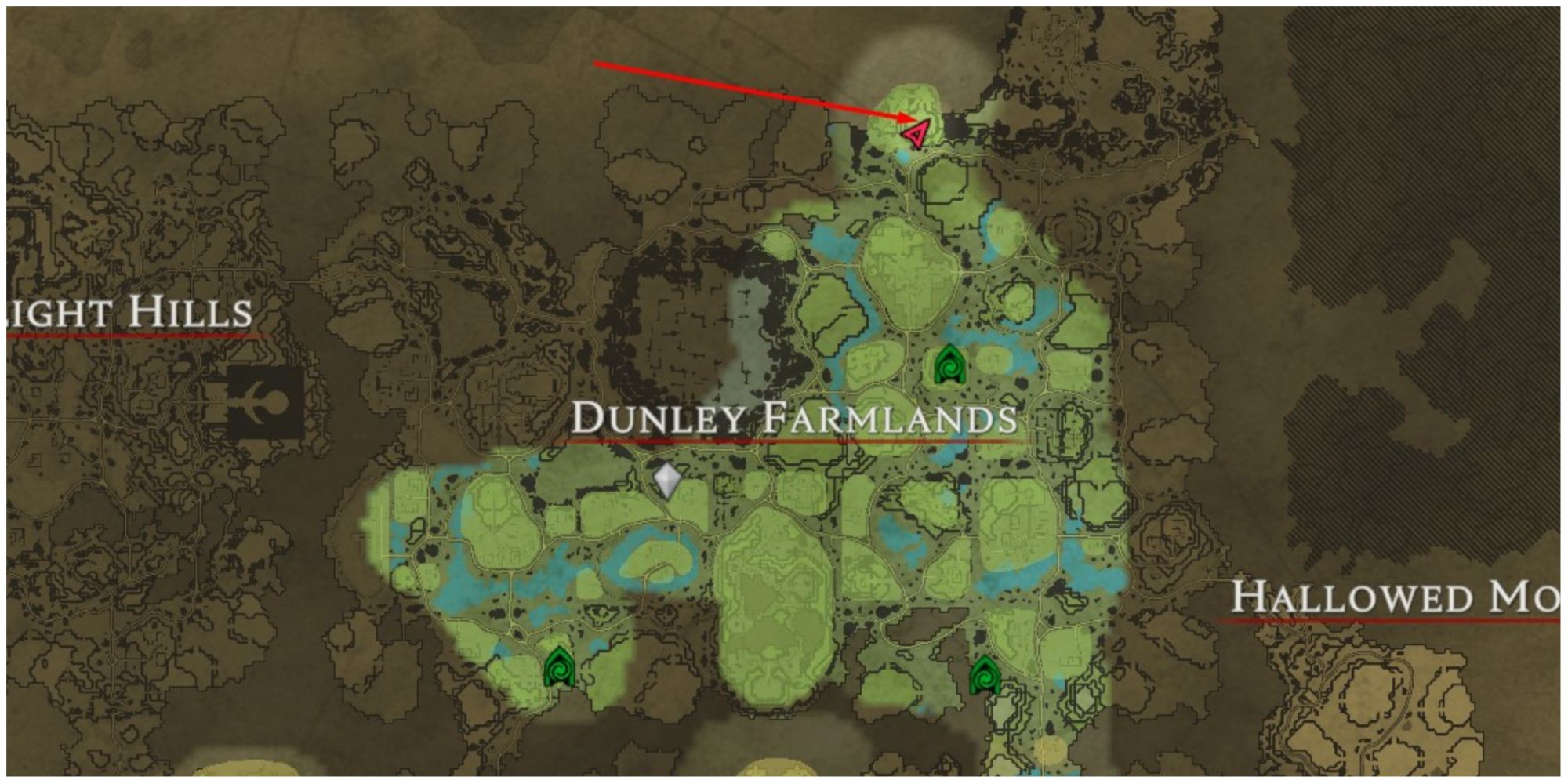 Leandra The Shadow Priestess is a combat level 46 boss, that can be found in the Church Of The Damned in the Northern section of the Dunley Farmlands. She is situated at the highest section of the hill, and you will have to fight your way through an undead horde to reach her. The Church grounds are infested with numerous enemies including Skeleton Mages, Skeleton Bishops, and Armoured Skeletons. Try to clear them out as you progress, as due to the Bishop's ability to summon extra Skeletons, you may find yourself becoming overwhelmed by their sheer numbers. The Skeleton Mages will deal some nasty Unholy damage, with their Unholy Bolts and AoE grounds effects, so take your time and don't bite off more than you can chew.

The major obstacle to reaching Leandra lies in the form of the Undead Commander mini-boss. A level 49 foe, the Commander hits hard and has a high health pool, so try to pull him by himself and avoid bringing other enemies into the fight. He has a nasty melee swing and will utilise a couple of abilities to defeat you, including Unholy Bombs which will deal damage over time. He will also use a frontal Chain Grab ability, and if you are hit by any of the chains, you will be pulled towards him and take heavy damage, so try to keep circling his hitbox. The Commander will also spawn Undead allies, in the form of Skeleton Mages and Bishops, which can spawn smaller skeletons in turn, so try to prioritise killing these off as quickly as possible, as their spells can make it more difficult to focus on dodging the Commander's.

Upon defeating the Undead Commander, you will have a high chance of looting an Orb of Knowledge. This is an instant use item that will teach you a recipe for the General's Soul Reaper, a very powerful Scythe that beats out the Merciless Iron Reaper, making it potentially the strongest weapon you will have access to at this point in the game. The Reaper will cost the following materials:

Leandra is always located in the same place, so the use of your Blood Altar is not necessary for locating her. 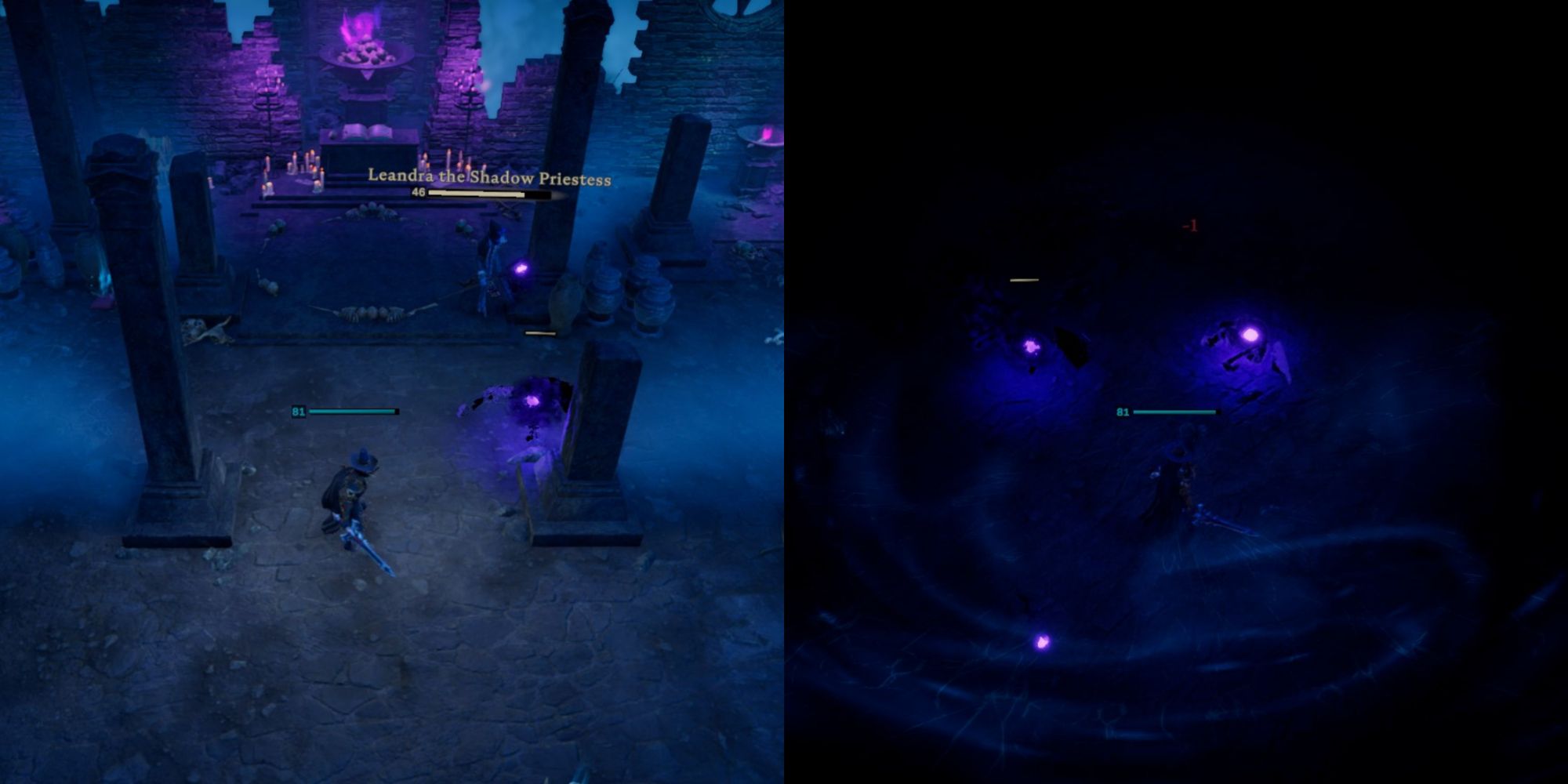 Leandra The Shadow Priestess is flanked by a Skeleton Mage and a Skeleton Bishop. You can pull both of these mobs without aggroing the boss, and it will make the fight slightly easier if you can do so, although they may run away in such a direction that the boss is pulled anyway, and if so, just kill them before turning your attention to Leandra.

Leandra will assault you with Shadow spells, the first of which are three Shadow Blasts, that will converge into a set location and explode. The pattern with which the bolts are projected is easy to dodge, and moving to the side or rear of the boss will prevent you from being struck by these, as they deal a substantial amount of damage. The boss will also fire a quicker Shadow Bolt and a slow Shadow Orb, but both are nothing to worry about as they will not deal much damage to you.

Leandra will occasionally put up a Shadow Shield, that prevents her from taking damage and teleports her to a new location. You are generally free to play aggressively against her, as she does not have any spells that can punish you, so keep up the attack and try to avoid a battle of attrition.

The Shadow Priestess will also spawn a Shadow Minion, that will rush towards you and attack with a frontal slash. They have a very small amount of health, so any ability should be able to kill them off, but they can begin to rack up the damage on you if you ignore them, so make them your top priority.

Leandra's ultimate ability is to send you to the Shadow Realm for four or five seconds, reducing your vision and sending Shadow Minions towards you. Your best bet is to simply run away at this point, as kiting out the minions should not be too difficult, provided you have your Travel Ability off cooldown. The realm itself will not deal damage to you, but you will be unable to hit the boss during it, so survival is the new goal.

An Iron Weapon (or even the General's Soul Reaper) is a good tier of weapon for this fight, and for Armour, Hollowfang Battlegear will be the default choice. Shadowbolt and Chaos Volley are good spells, although for clearing the way to Leandra some AoE options such as Aftershock or Corpse Explosion might prove more useful. Scholar Blood is your go-to Blood Type. 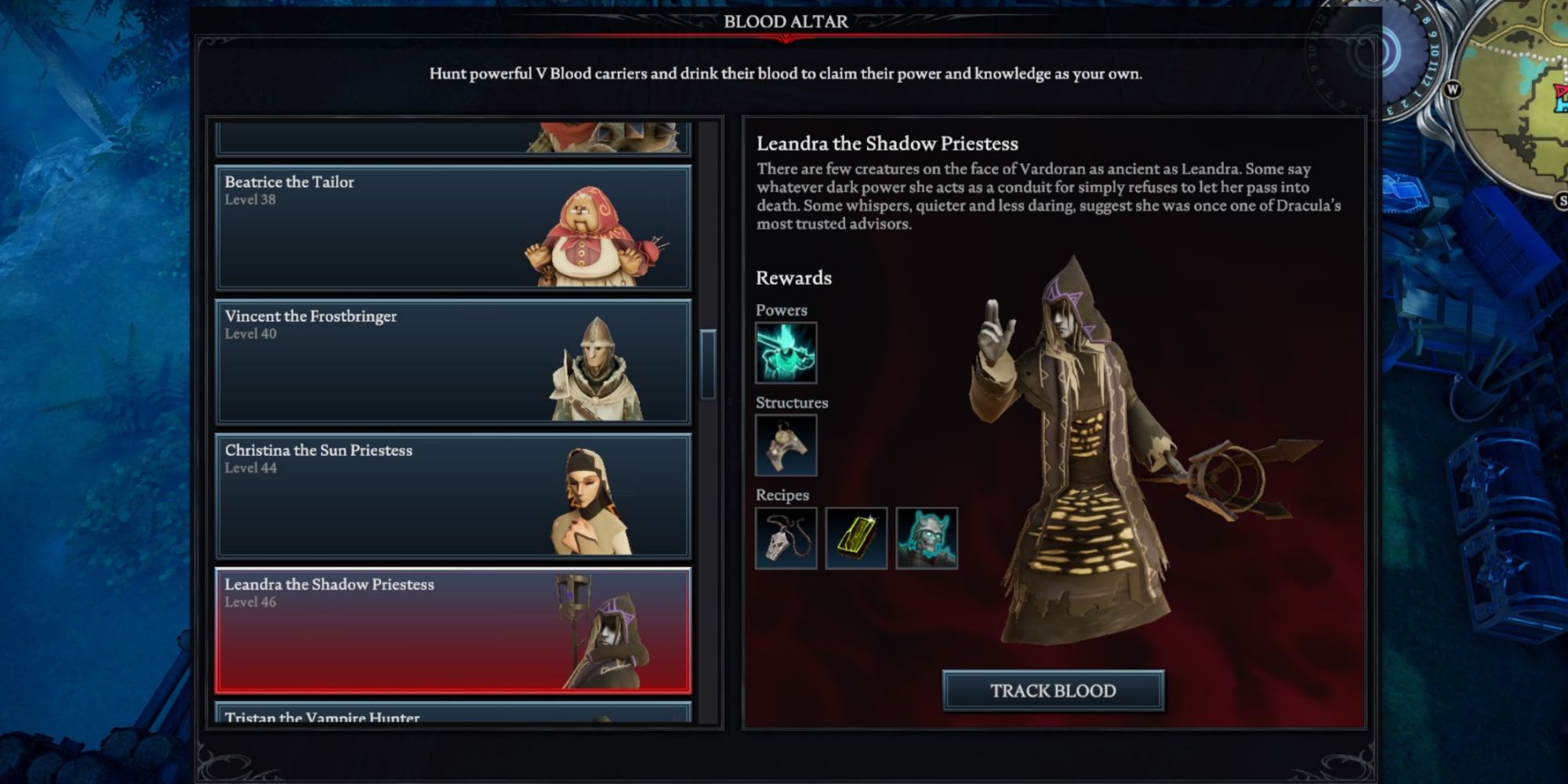 Defeating Leandra will grant you a variety of rewards, including some useful recipes. The first is the Jewelcrafting Table, which will now allow you to craft various Rings and Necklaces. These items can substantially increase your spell damage and are very important pieces of gear, so this is a great pickup, and alone already makes Leandra a mandatory boss. You will obtain the Scourge Pendant recipe straight away, which will cost a Scourgestone, some Glass, and 45-60 Sunflowers. To help craft your new bling, you will now be able to create Scourgestones at the Jewelcrafting Table, which are an important resource for various gear and castle options, and means you will not have to solely grind Undead mobs to obtain them.

Leandra will also provide you with the Spectral Assassin Vampire Power, which will spawn an un-targetable minion at a location, performing a damaging frontal sweep, knocking enemies back, and reducing their damage output for a few seconds. A nice utility ability, but the damage is somewhat underwhelming and there will always be better options, but it does have a nice visual nonetheless.

Lastly, you will now gain the ability to spawn Skeleton Priests from your Tomb structure. These can be farmed to your heart's content to obtain Scourgestones, Bones, and Grave Dust.