Home » News » V Rising: How To Find And Defeat Clive The Firestarter

V Rising: How To Find And Defeat Clive The Firestarter

V Rising offers players a steady progression path via the killing of dangerous bosses. With over thirty-five bosses on offer, it stands to reason that some of them are going to be more enjoyable than others. Clive the Firestarter is one of the top tier bosses, as his bomb-centric moveset constantly has you on your toes, and he can be a significant step-up in difficulty from some of your other early game foes.

This guide will instruct you on where to find Clive The Firestarter, how to defeat him in battle, and what rewards you can claim from draining him of his V Blood. 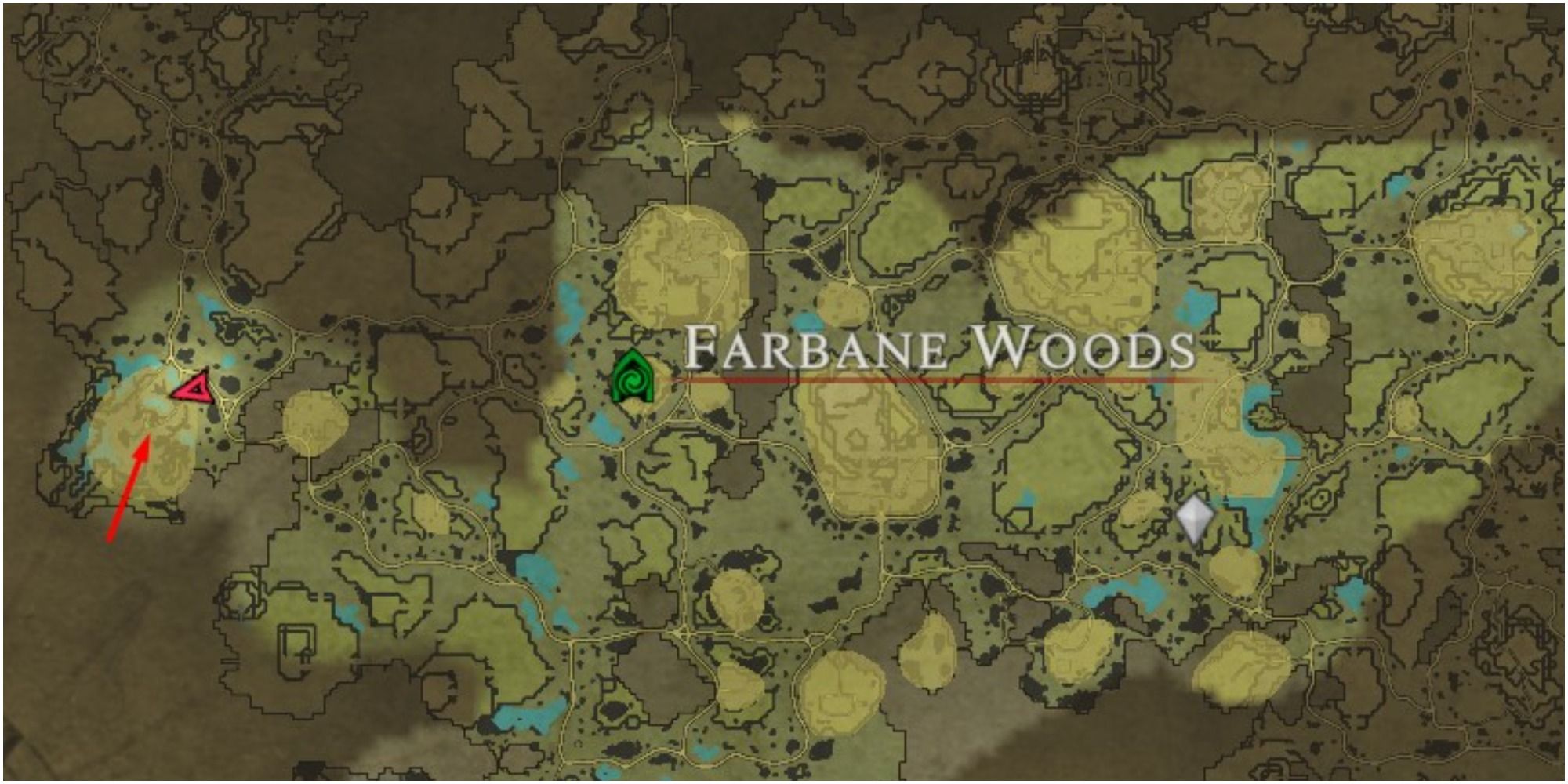 Clive The Firestarter is a level 30 boss that can be found roaming the Bandit Sulphur Quarry in Farbane Woods. The Quarry can be found in the extreme western section of the Woods, and features a new type of enemy Bandit; the Bomber. These mobs will spam you with ranged bomb attacks that deal a large amount of damage upon exploding, and will also knock you back a fair distance. A particularly dangerous enemy, you will want to clear them out of the Quarry before engaging Clive, as any rogue Bombers will make the job of defeating him significantly more difficult.

Once you have room to engage him, Clive can be found wandering around the central rock formation. He will not spawn any adds throughout his fight, so unless your battle goes on for a long time, you should not have to worry about dealing with any extra enemies.

The Blood Altar can be used to pinpoint Clive's exact location, but he is not a roaming boss and its use is not necessary in locating him. 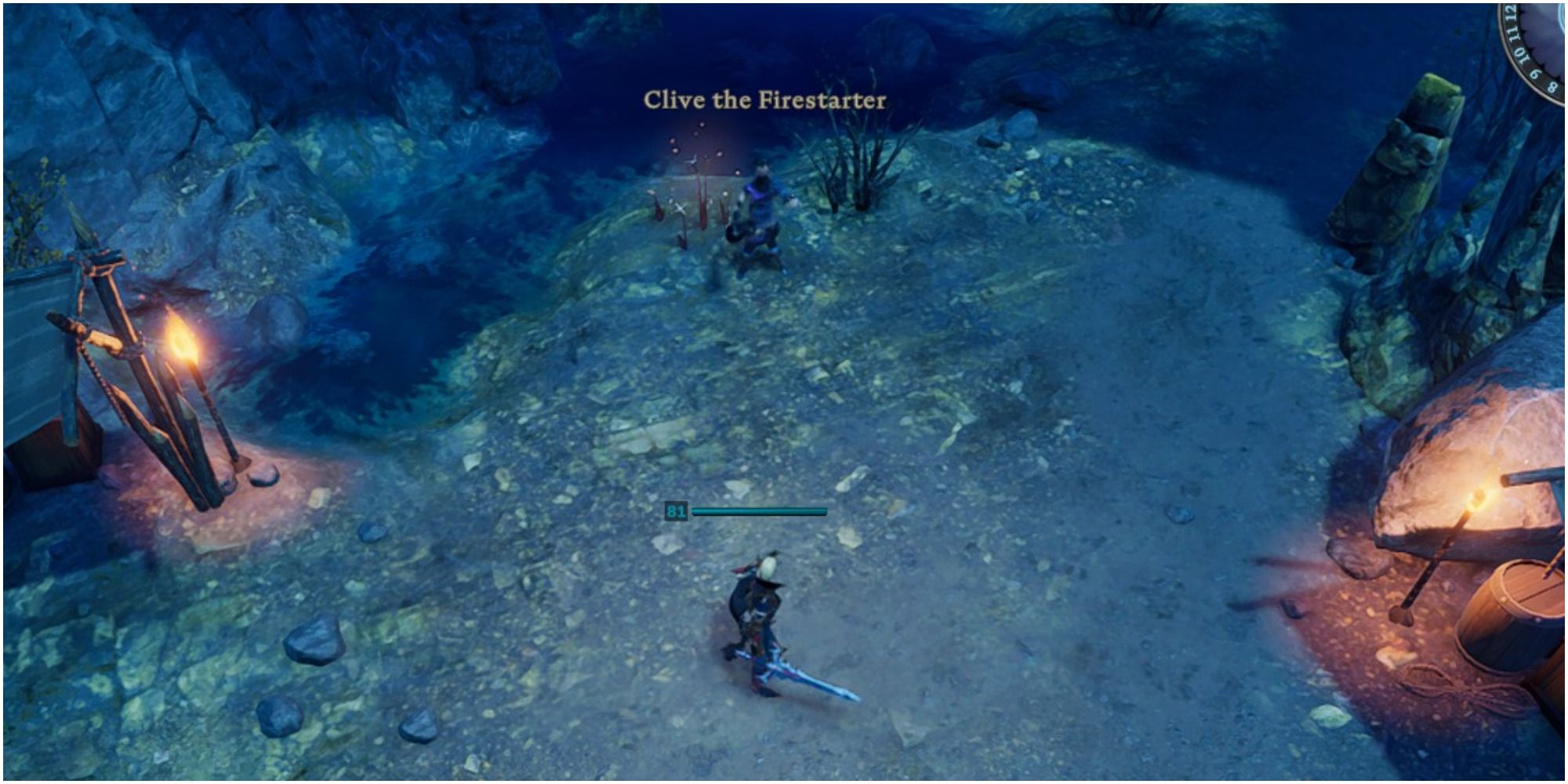 While Clive is deemed to be a tricky encounter, he actually only has two abilities. The first is to launch a massive bomb directly onto your location, before separating into eight smaller bombs. This ability can be quite difficult to dodge, due to the large explosion size and amount of area the bombs cover. Saving your Travel ability is very important for this, as you can easily be caught out if you are simply running away. Avoiding the initial bomb is of higher priority thanks to its higher damage.

Clive's second ability is a frontal charge, that leaves a trail of three bombs behind him. This gives Clive some mobility and also prevents you from chasing him down. If Clive decides to charge you in a narrow passage you may find yourself out of room, and with the way Clive's moves work, you can easily get knocked back into consecutive bomb explosions.

Staying in melee range with Clive The Firestarter can be very difficult, as his constant bombardment will frequently force you to run away from him. Bringing a Crossbow to this fight is highly recommended, as while it is one of the lower damage weapon choices in V Rising, it is definitely the safest. Sniping Clive from range gives you a much higher chance to escape his bombs.

As Clive has a combat level of thirty, you will want some decent early gear to go up against him. Some Merciless Nightstalker armour and a Merciless Copper weapon is recommended, and even then Clive will still hit you hard should you get caught by any of his bombs. Bring some Vermin Salves along to help smooth out any damage you take. Shadowbolt and Chaos Volley are your go-to spells, as Clive is a single target fight, and you will need some good ranged damage options. 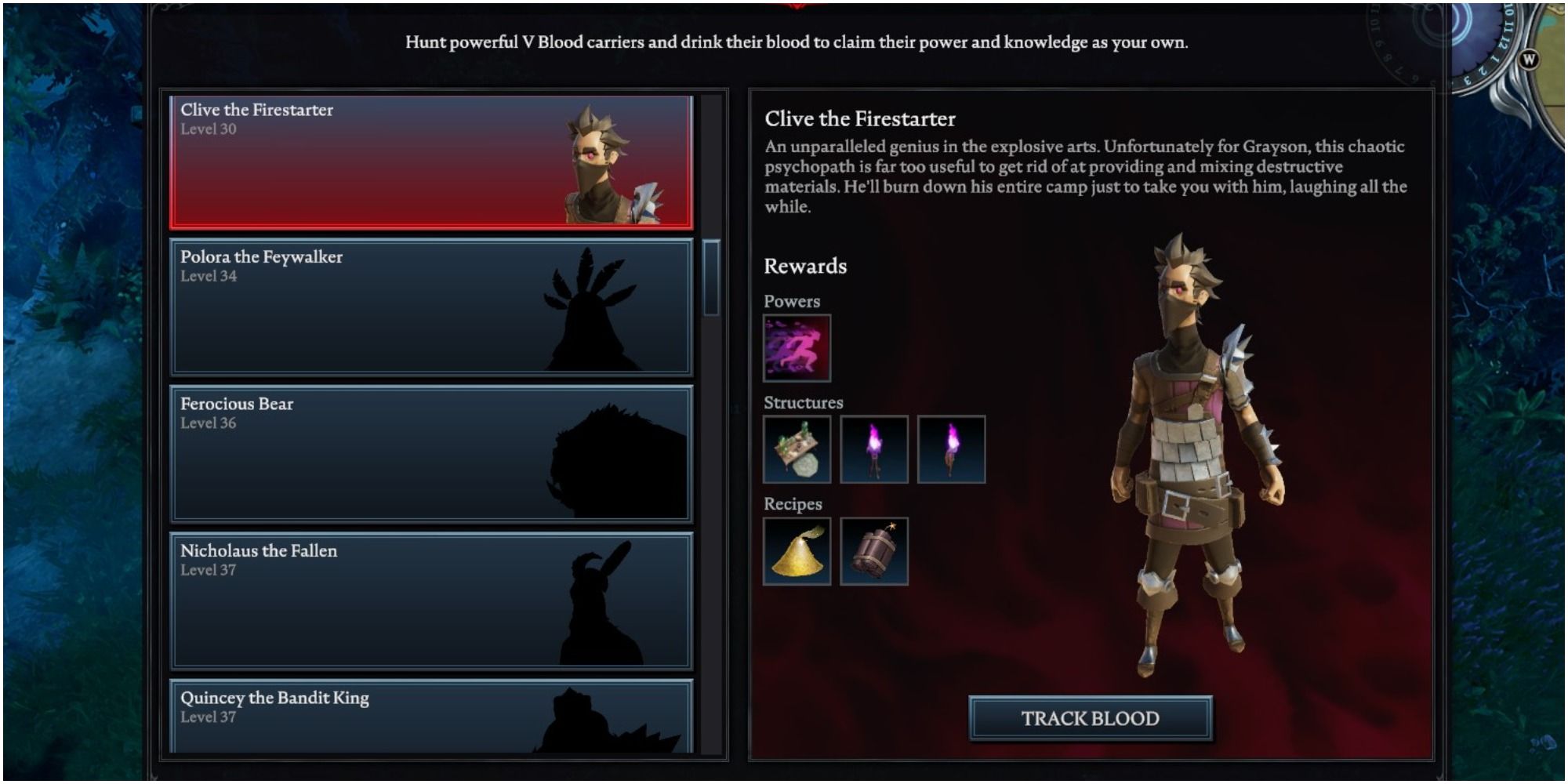 Upon drinking Clive The Firestarter's V Blood, you will gain access to the Veil of Chaos Travel ability. This dash will spawn an illusion and empowers your next melee attack. It can also be recast in a short period of time to dash again and spawn a second illusion. The illusion will explode after a few seconds, dealing damage in an area around it. With its two charges, this is one of the best mobility spells in the whole game, and you should definitely think about switching over to it for the foreseeable future. It can provide a nice damage increase, and having the double dash will be very important when fighting against higher-mobility bosses.

Clive will also grant you the Alchemy Table recipe, which can be used to create a variety of explosive concoctions. He will provide you with some recipes to get you going including:

The enchanted decorations can add some great visual variety to your castle, and the Minor Explosive Box will be used further down the line to access an extremely important boss: Quincy The Bandit King. Sulphur is a key component of some endgame recipes, and you now have a way of mass-producing it, by smelting down Sulphur Ore in your Furnace.