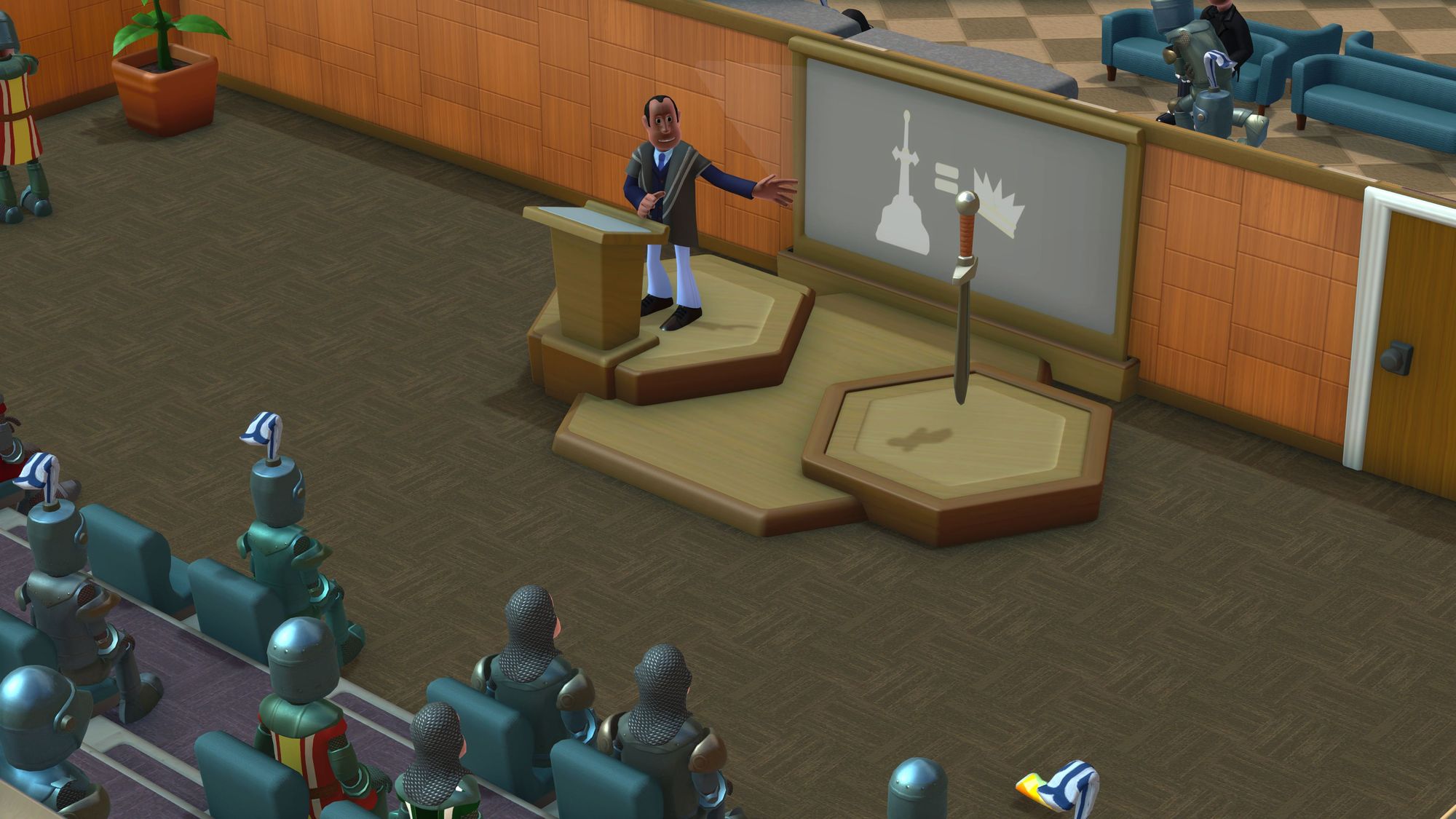 The creators of Theme Hospital return with a new management sim that puts you in charge of a university where the courses are pure comedy.

‘Business management simulation’ is about as unprepossessing a name for a genre as you could possibly imagine. It suggests grey suits, spreadsheets, fastidious dullness, and above all, a mouse and keyboard. The good news is that Two Point Campus involves none of these. From the developer of the excellent Two Point Hospital, this turns out to be a vibrant antidote to the idea that business sims have to be boring.

Instead, what you’ll find is a university building and management game infused with humour and whimsy, its colourful little denizens having more than a whiff of Aardman Animation about them. From the emojis they emit, to the wonderfully offbeat college radio stations, to the dialogue of each of your personal advisers, this looks and feels like a uniquely British labour of love.

You’ll also find that none of the universities you administer teaches anything as boring as economics, English literature or mathematics degrees. Instead, you’ll be helping to run a clown school and educating the masses in the niceties of Virtual Normality, The Dark Arts, and Counter-Cultural Studies. It adds to the sense of knockabout fun and all round silliness that underpins its rigorously detailed simulation.

Starting with an empty building, your first job is to install the facilities your students and faculty will need before the start of your first term. A dormitory, student lounge, lavatories, showers, a staff room, and an ever expanding list of other rooms and outdoor areas. The summer break is your pressure-free calm before the storm and a useful time to make sure everything you need is ready for the coming year.

Along with setting out each room’s perimeter, you also need to furnish them. Every room type has a minimum set of equipment but depending on the space available you can augment the bare essentials with extras to increase the room’s prestige. That adds to the overall level of your university, inspiring students, raising grades, and eventually reaping more applications and higher fees.

Naturally, space is limited, and arranging rooms, corridors, and open areas requires a Tetris-style eye for tessellation, as well as an impression of the relative importance of each room – having a massive toilet block is of limited value compared with extra space to add prestige to your science labs or Spy School classroom, for example. You also need to make sure every room, corridor, and individual piece of kit is accessible to students. Pack things too closely and you’ll need to expand the room or rearrange its contents.

As well as premises, your college relies on having the right members of staff. Teachers specialise in particular subjects and come with their own starter abilities and bonuses; assistants do everything from manning the coffee shop and student union bar to administering the library, while janitors (the only non-British-sounding part of this whole enterprise) clean, upgrade, and repair broken equipment, repel intruders, and generally keep your facilities looking sharp.

Each staff member can be trained to improve existing skills or add new ones. Of course, training costs money, takes staff out of circulation for a set number of weeks, and needs its own specific room, but it also helps you stay competitive as your college grows. The better your teachers, the higher the grades, and the more effective your janitors, the faster the repairs.

It’s to the developer’s credit that the complexity of its systems never feels overwhelming. The game’s divided into levels, each of which features its own discrete university, with its own course specialisms, limitations of its grounds, and building shapes. Every level has its own personality, and adds its own new content to play with, whether fresh subjects and rooms, or additional problems to solve, like heating systems or, in the case of Spiffinmore the wizardry school, meteorite showers.

Perhaps Two Point Campus’s biggest surprise is the outstandingly high quality of its interface and control system. Despite its intricacy, you’re rarely more than two or three button presses away from achieving what you want to. Even more than that, after an hour or two’s play you’ll find yourself triggering interactions and firing off instructions intuitively, without having to think about it. It’s a testament to the refinement of its systems.

While its simulation model adds layers as you progress, you’ll find the game maintains an admirable sense of balance. There are minor bottlenecks, most frequently cash based, as building and recruiting too far ahead of your needs will exhaust your money supply in short order. As such, one of the first lessons you learn is to construct in line with needs, letting your monthly income support your endeavours rather than attempting to do too much upfront. You can take out loans, but as in life, they cause their own stresses.

There are other times when you won’t be able to fulfil student requests through a lack of kudosh – the currency used to unlock new equipment – leaving you unable to buy the gizmo they’re yearning for. These deficiencies always fix themselves as you progress, and there are no penalties for failure to give students what they want, just small missed bonuses.

It would be nice to be able to fast forward time even more than the game’s maximum speed allows, and it’s fair to say that furnishing rooms does eventually pale (although the room templating system neatly circumvents that in the latter stages of the game) but the variety of different buildings, courses, and requirements generally helps keep things feeling fresh.

For fans of tinkering and strategy, Two Point Campus has much to recommend it. Humorous, polished, and at pains to introduce its systems in a way that makes them welcoming, rather than terrifyingly complex, it’s a business management sim without the starched collar. It’s also very funny, and despite the frequent repetition of its jokes, remains thoroughly likeable throughout.

In Short: A delightful, humour-infused, and very British university management simulator with Nintendo-esque levels of polish and depth that’s introduced so gently you barely notice it.

Pros: Funny, intricate, and surprisingly easy to play. Each level is a separate university, which keeps things feeling new and helps you understand gameplay elements before more get added.

Cons: Jokes repeat themselves fairly frequently. Some of the more routine elements eventually pale and there’s no help function if you forget how to use the more abstruse systems.