After agreeing to run some illegal salt for one of Hyzante's Saintly Seven and dealing with such a treacherous journey to Aesfrost, Serenoa and co. were confronted with yet another dilemma. Luckily for them, they have the oft-useful Scales of Conviction.

After turning to the scales, it was decided that the party would keep Roland's identity a secret from the Aesfrosti, not trusting him as far as he can be thrown. What consequences will this have for the rest of Triangle Strategy? Well, in the immediate future, we have an arena battle to deal with.

Avlora and Cordelia learn some intriguing news, including that of a certain masked man.

Side Story: Citadel Of The Sands

Elsewhere in Hyzante, Tenebris shares his concerns with Sorsley over the latter's reckless behavior.

Some regret is shared over the party's course of action, with Roland thinking they should have revealed his identity. Later, Clarus is summoned to the encampment with the intention of extracting some funds from him. Clarus responds with an exciting proposition. 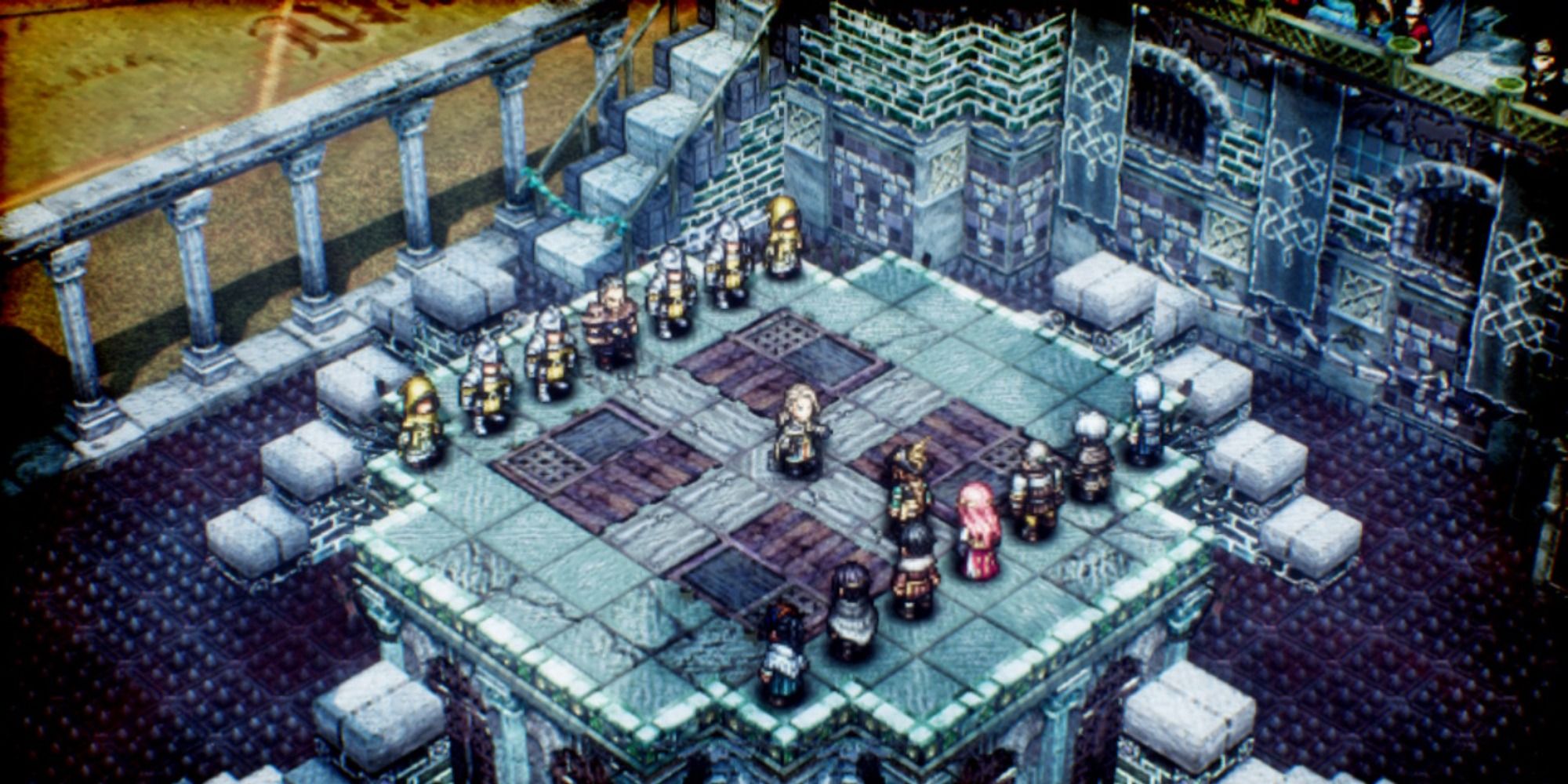 Clarus's suggestion is for House Serenoa to enter into an obviously illegal tournament on the border of Aesfrost and Glenbrook. They need money, but the stakes are high – these will not be mock battles.

As ever, check out the encampment before the battle in this chapter. Check the Tradepost and the Smithy for any Quietuses or weapon upgrades you can buy. Promote someone, if possible. You want to be powered up for the coming challenges.

Looks like it's a battle against Rufus and some lackeys. For those of you who faced off against Telliore in Chapter Eight, this will be quite the grudge battle as you know what Rufus is capable of. For those of you new to this brute, be prepared for a tough opponent. 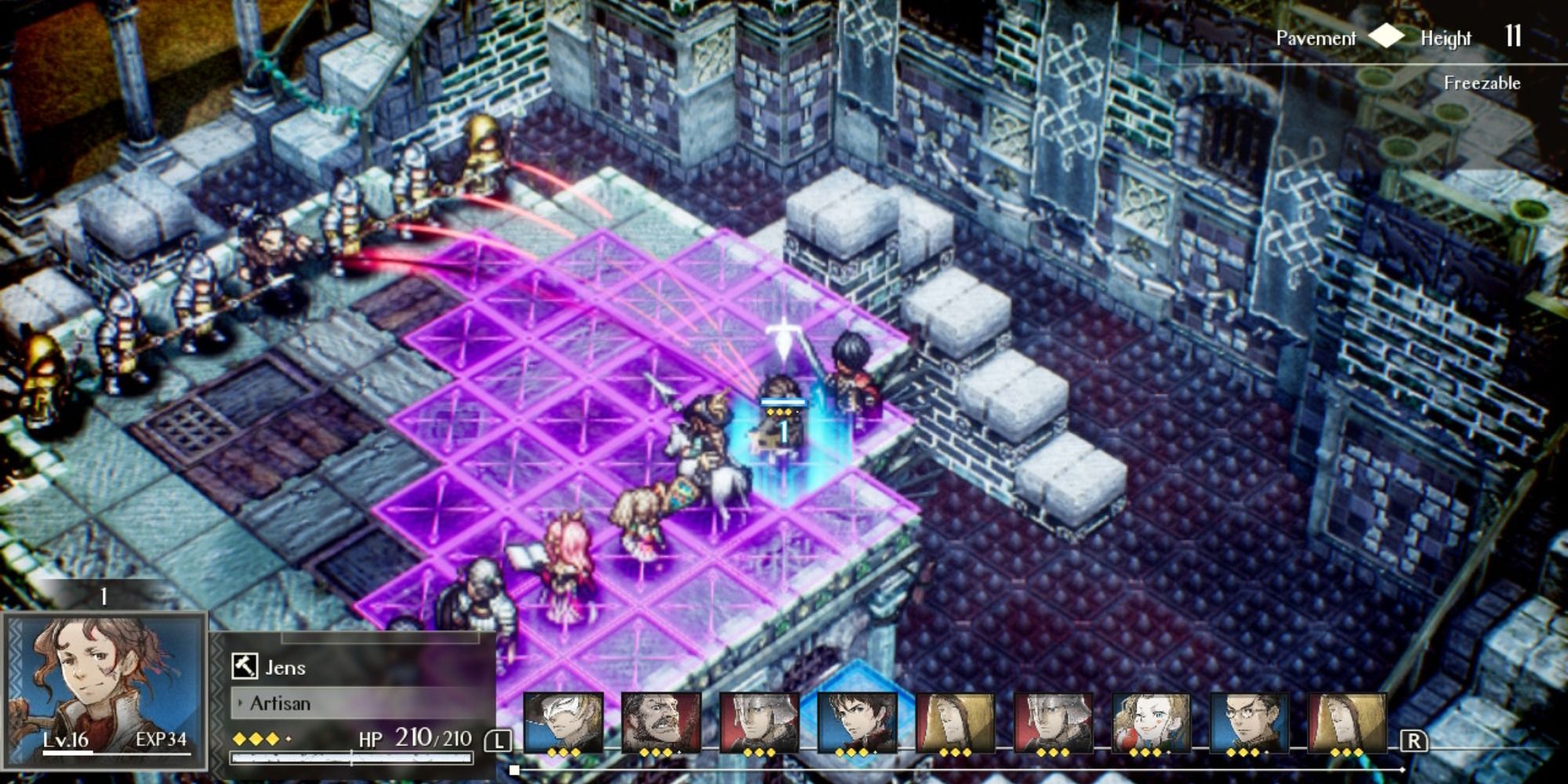 The first thing you'll notice in this fight is the incredibly cramped battlefield. This will severely limit your ability to protect certain characters, especially with the slightly ranged attacks that the Glenbrook Pikemen can use.

What's incredibly important to note, however, is that the battlefield has no railings. It's more than possible for your units to fall off the edge and into the spiked pit below. They'll take a great deal of damage from the fall and any spiked tile walked across will deal an extra 10 damage. Be very careful. 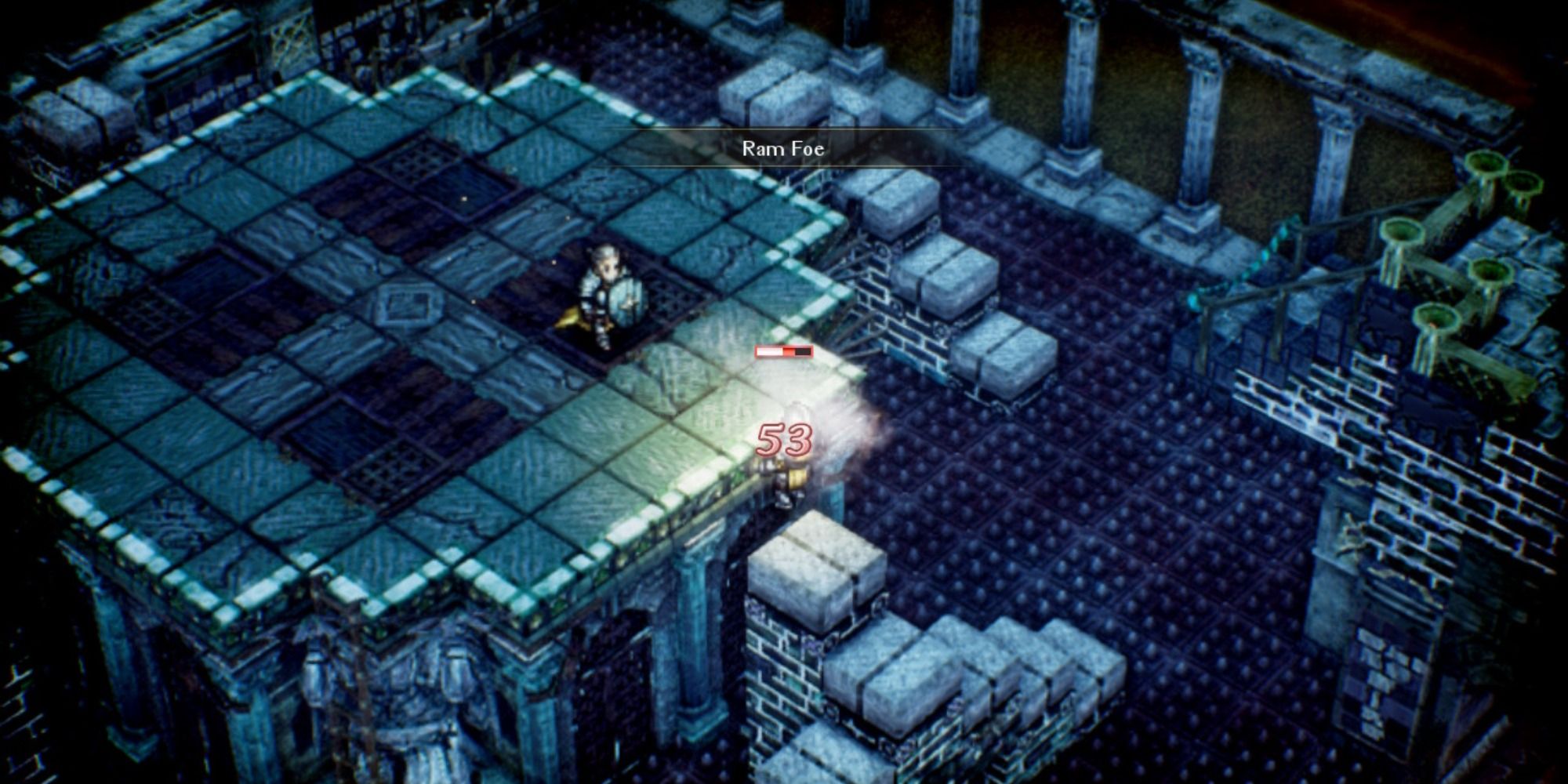 All of the recommended units are very useful in this fight. Julio has his fantastic TP-gifting ability that enables your stronger attackers to consistently use their best attacks. Piccoletta can separate herself into two units and use her double to distract enemies from your genuine units, and with Julio's support, she can use this more often than usual!

Erador is also useful for staying alive, thanks to the ever-handy Provoke, but his best talent in this fight is the Ram Foe skill. Turn the tables against your opponents by rushing them off the arena. 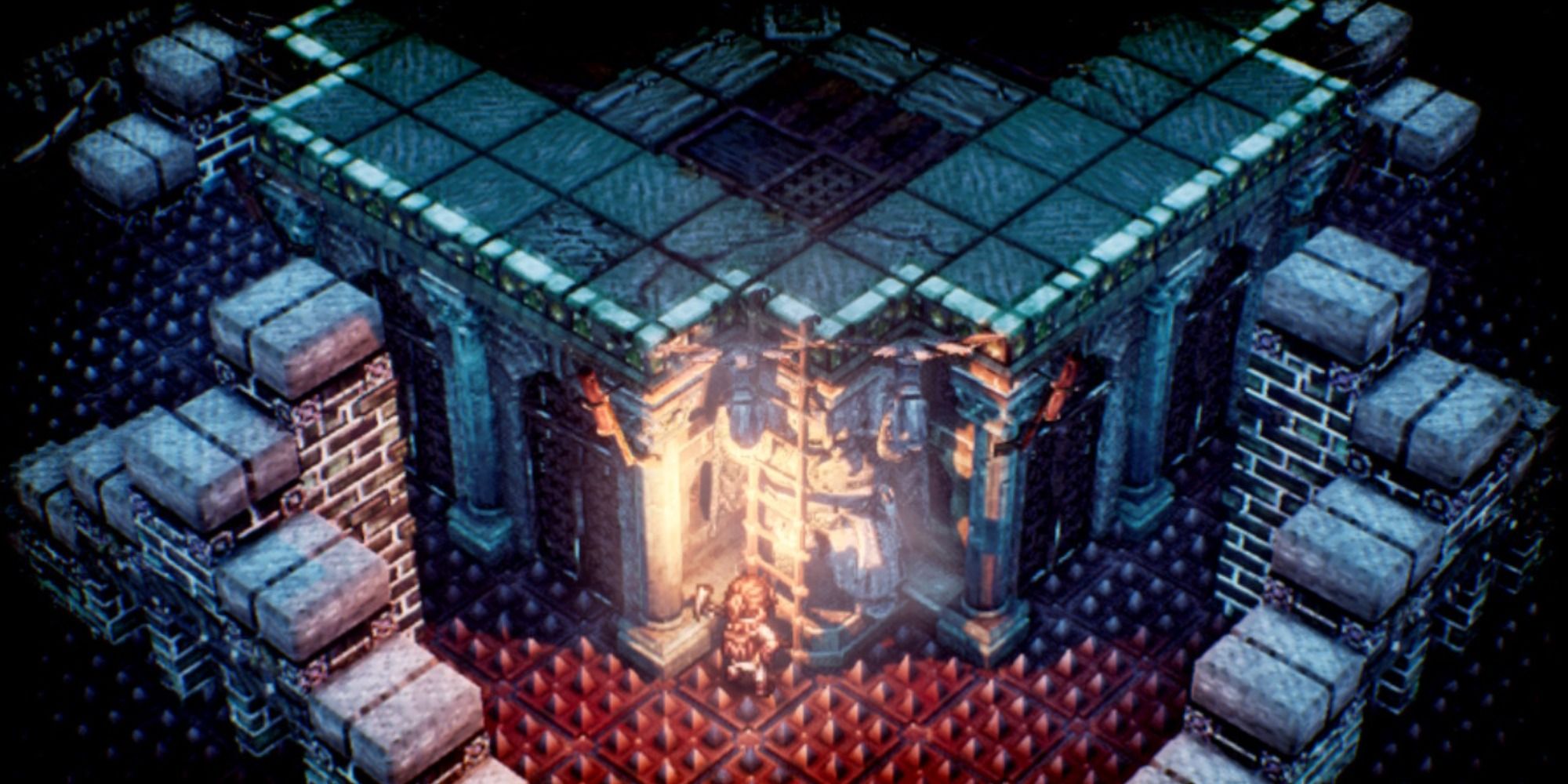 Finally, Jens has traps that waste enemies' turns and push them away from the fray, meaning they can be picked off easily later. On such a small battlefield it is easier than ever to draw foes into these traps. Jens's biggest boon, however, is definitely the ability to create ladders. He can use them to get units back up from the spiked pit if they ever get knocked down.

And knocked down they are likely to be, thanks to Rufus and his brutal Knock Back ability. He can't use this very often, thankfully, but it will likely be the cause for a few upsets. For this reason, Rufus should absolutely be your priority target. 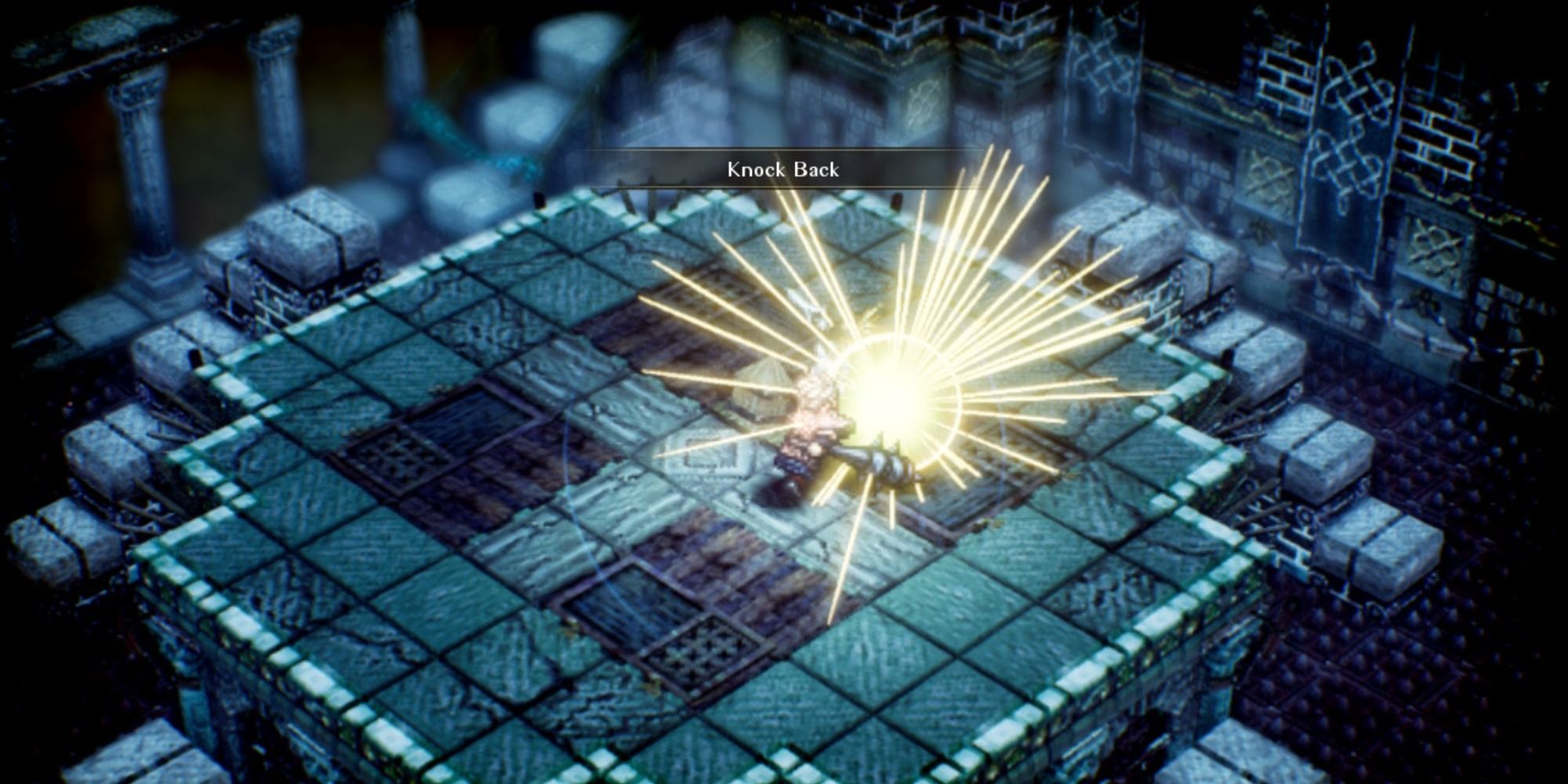 Rufus has a few physical skills to be wary of, but Knock Back is the most dangerous you'll face in this fight. After that, you really don't want him to use Bolster, as it'll make his attacks even more threatening.

Take advantage of his low magic defense if possible – Frederica is a good choice for this as ever, especially as the clear skies will boost her damage up considerably if you have that perk purchased at the Smithy. It's extremely important to note that Rufus is wearing an accessory called the Grounding Amulet, and this prevents him from being knocked around by any skills. This means you can't use Erador to push him into the spikes to get a bit of breathing room – you'll just have to kill him.

The mooks in this battle are no slouches either. The Pikemen can use Slam to push you off the stage as well as Rufus can, and the healers are extremely annoying. You'll want to deal with them as efficiently as you can, taking into account turn order and their positioning. 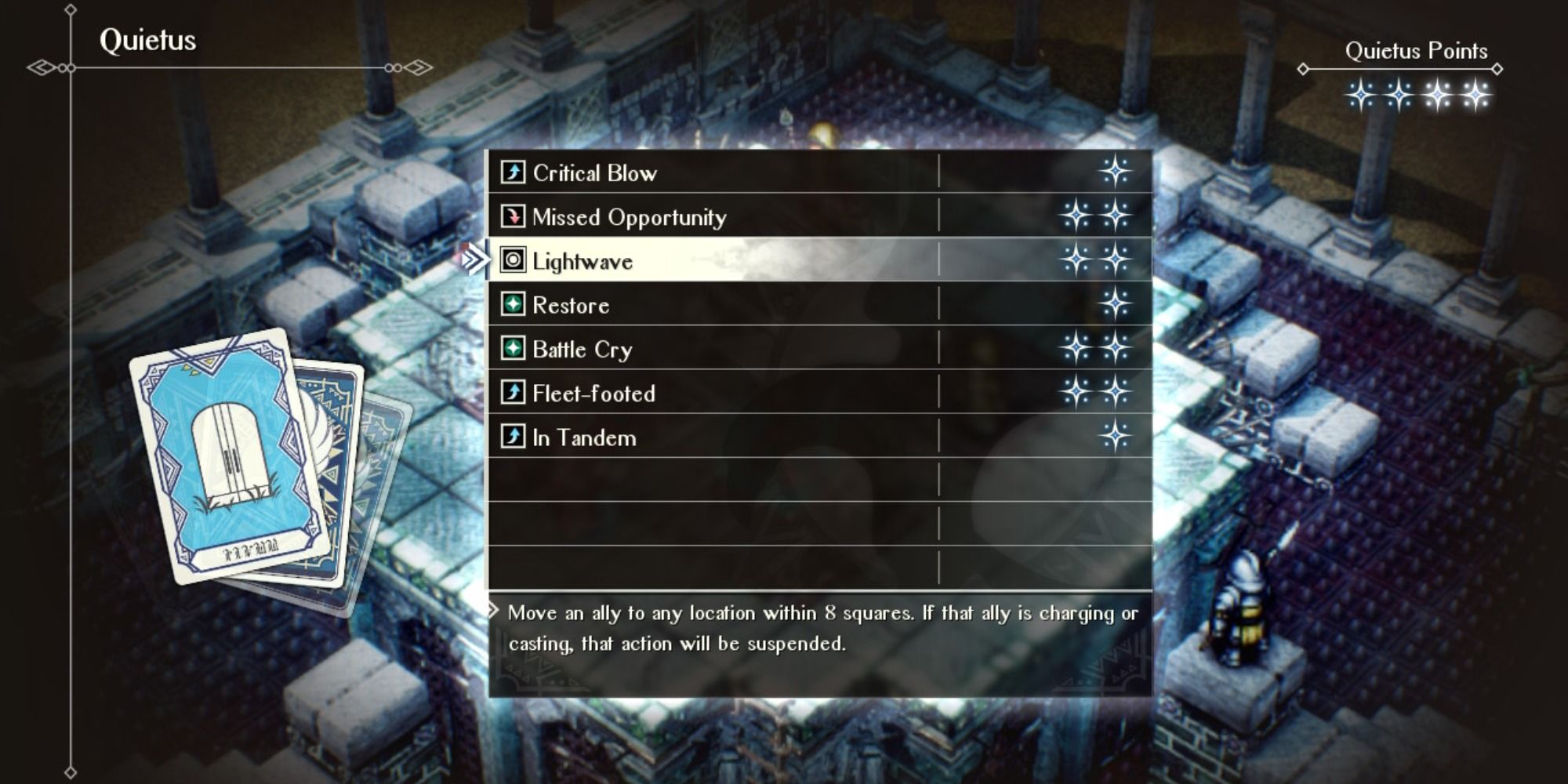 Various Quietuses can be crucial to survival in this fight. Lightwave can be used to retrieve an ally from the lower level, Restore is always a nice pick-me-up in a pinch, and In Tandem should be used to burst Rufus down when he's low on health and any healers threaten to undo your work.

Playing aggressively is the name of the game here, as you won't really have that much time or opportunity to turtle up and heal. Field your strongest units and those capable of supporting them. This is a good time to listen to the game's recommended units as they can help out a bunch.

After the battle come the spoils. You will actually get a full payment of 10,000 Coins to do with what you please, which is a nice turn of events. In addition, the battle will have provided you with Oak, an upgrade material for characters who use wooden weapons, such as archers, and a Medal of Bravery. You know the drill by now, use the medal to promote one of your favorite characters. If you haven't, now would be a good time to get Frederica up to the second rank.

With that, the chapter is complete and the party heads back to report to Sorsley. 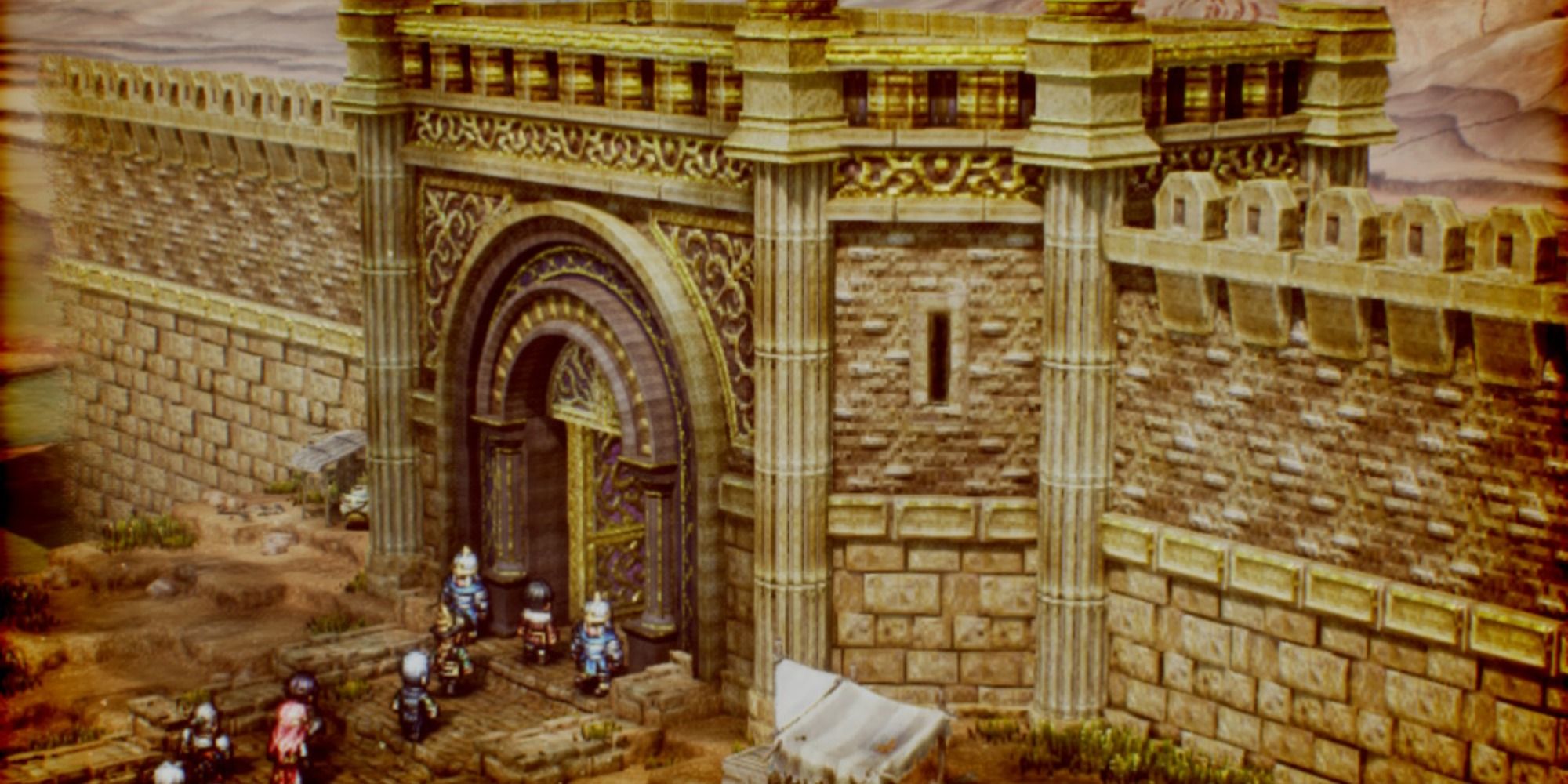 With a pocketful of Coins and his mission fulfilled, Serenoa heads to Hyzante to report his success to Minister Sorsley.

This is a quick part that doesn't involve any combat, but you will want to pay attention all the same. It begins with a cursory examination of the situation in Hyzante.

Side Story: Citadel Of The Sands

Angry that Serenoa is granted an audience with the hierophant despite the low status of his house at present, Sorsley rants to Tenebris, who seems to have his own secrets.

With the meeting with the hierophant turning out to be something of a trial, it seems like the end for Sorsley and his life of crime. This must have been what Tenebris was talking about…

Once the trial is over, the Saintly Seven have a unique proposition for Serenoa, but it comes with a high price. Something to be tackled in the next chapter, surely.