The Ogre Kingdoms, available as a preorder bonus or as a DLC for Total War: Warhammer 3, are a heavyweight faction whose armies require more than gold to keep satisfied. Players need to keep their bulky battlers well-fed, or they'll find themselves on the menu before long. If you can juggle the extra requirements of fielding large Ogre armies, you'll have a fighting force capable of smashing through any foe with ease.

This guide takes you through the unique mechanics of the Ogre Kingdoms and points out the do's and don't's of playing as them. We'll also take a look at the opening moves for both of the Ogre Kingdoms' playable Legendary Lords, Greasus Goldtooth, and Skrag the Slaughterer. 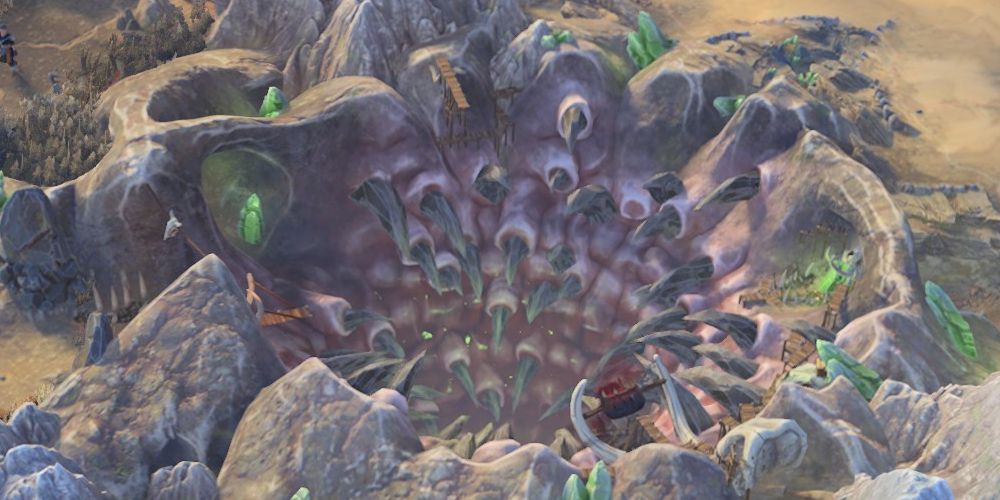 Every Ogre army carries its supply of a unique resource; meat. Ogre culture and religion are centered around food, and fresh meat is the most prized of all. While in friendly territory, Ogre armies will accumulate meat which they will take with them when they go on campaign. Some characters, notably Slaughtermasters and Butchers, can also generate meat for their armies. Each unit in an army consumes one unit of meat a turn, though larger, more advanced units may require more. If an army doesn't have enough meat to feed every unit, it suffers attrition as the ravenous Ogres devour gnoblars, pack animals, and each other. For this reason, your armies must be fully stocked before you send them too far from home.

In the field, your armies can get extra meat by winning battles. It's rarely enough to supply the entire army for even a turn, but it can keep you from going negative until your army gets within range of a camp. If you have a surplus of meat, you can spend ten units of it to make an offering to the Great Maw. Doing so provides the army with a bonus for the next ten turns, chosen from the following: 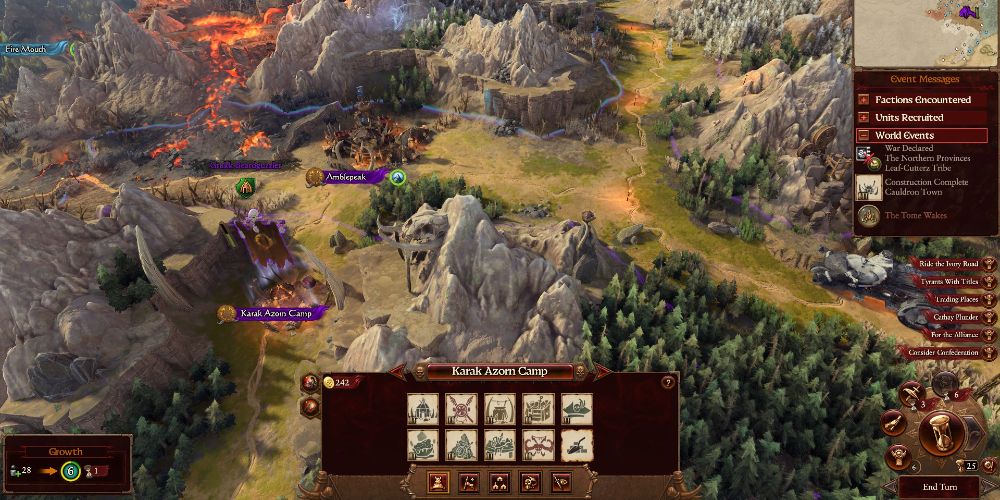 If you have armies traveling far afield, establishing camps will keep them fed. An army can spend gold to place a camp at its current location on the map, even in enemy territory. The camp functions like a mini-settlement with its Growth and building slots. The primary function of camps is to provide meat to armies in a wide radius around them, but with the right buildings, a camp can also generate income, buff nearby armies, or even hold a chokepoint on the map. An army within a friendly camp's circle of influence does not consume meat from its stockpile.

If a camp is in a province you control, its Growth is separate from that of the province.

You can only have a limited number of camps on the map at a time. The only way to increase this number is to research the appropriate technologies. Choose your camp locations wisely – we recommend finding a central location in a region you intend to conquer or plunder.

A camp has its army to defend it, led by a unique Lord called a Camp Tyrant. The Camp Tyrant and his army can never leave their camp, but units can be transferred to and from visiting armies you control. You can recruit to the Camp Tyrant's army like you would any other, potentially creating a formidable force at a static location.

Camps are considered fortified, so an enemy that attacks one will be required to lay siege, and you'll be able to build defensive works during the battle. If the attackers win, the camp is destroyed entirely and any investment in it is lost. This does, however, free up a slot for a new camp elsewhere.

If a camp is in the territory of a faction with whom you are not currently at war, they can hire Ogre mercenaries to fight in their armies. Cunning Ogres can establish camps to give the enemies of their enemies an edge this way or bolster their allies. 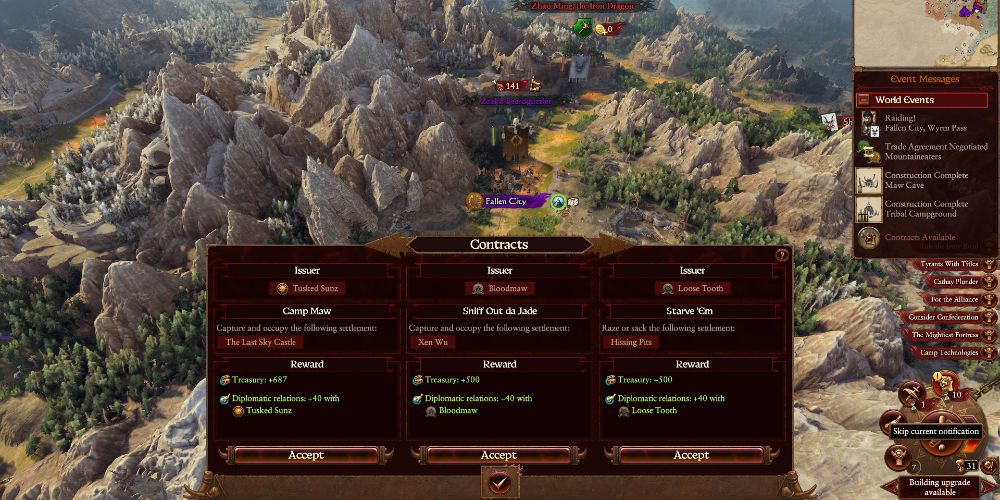 Neighboring factions will periodically issue Contracts to an Ogre Kingdoms player. When a Contract becomes available, you'll be able to choose which one you'd like to take. Contracts typically require conquering a certain settlement, eliminating a specified character, or otherwise hindering the issuer's enemies. Fulfilling a Contract earns you a monetary reward and improved relation with the issuing faction.

Often, you'll have the option to take one of several Contracts with the same objective. They might have slightly different rewards, but ultimately in these situations, it's best to take the Contract offered by the faction you'd most like to curry favor with.

A new Contract becomes available every ten turns, and you can have multiple Contracts active at once. 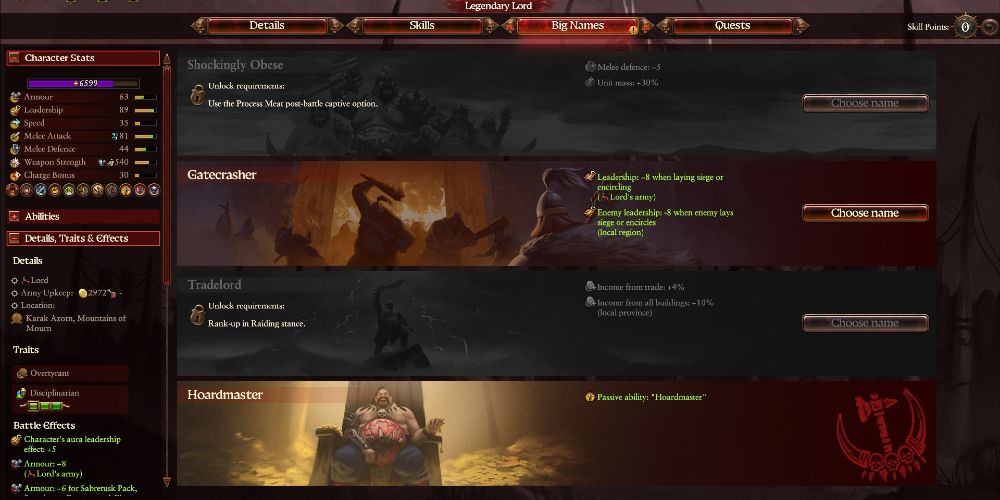 Big Names are special Traits unique to Ogre characters. Each Ogre Lord and Hero has four available Big Names chosen semi-randomly from a large pool. All four Big Names start locked and can be unlocked by fulfilling specific objectives for each one. Once unlocked, a Big Name confers its bonus on the character.

Each character can only have one Big Name active at a time, but changing to another unlocked Big Name does not lock the previous one, so you can always go back to it when the situation warrants. For example, several Big Names give bonuses against specific enemies – changing to a Big Name appropriate to your current foe can give the character a significant advantage. Big Names can be changed once every ten turns.

Getting Started As Greasus Goldtooth 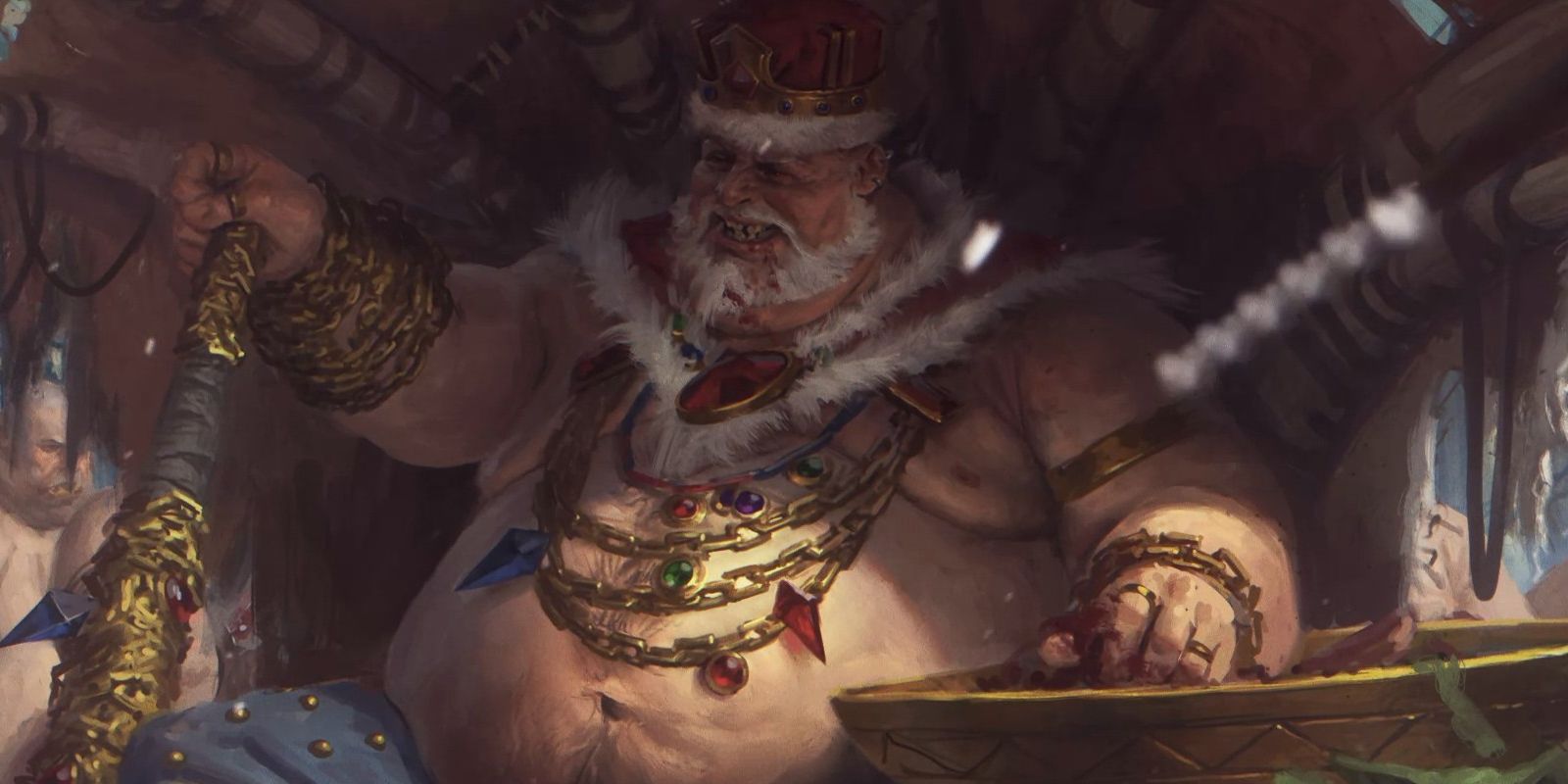 Greasus starts sandwiched between two rebel tribes of Ogres. Quickly defeating both will give you a solid economic base from which to expand. The first thing you should do is have your army make an offering to the Great Maw. It has plenty of meat in reserve, and the Bloody 'n' Raw bonus will significantly increase their attack. Once that's done, defeat the army to the south of you and earn the Quest reward for doing so. Embed the Hero that you earn from the Quest into Greasus' army for an extra gold reward.

From there, conquer Grimtop to the south then double back to take Amblepeak north of your capital. In the meantime, set about upgrading your capital and recruiting new units. Once your capital's main building reaches tier 2, you can upgrade your barracks to recruit more advanced troops.

Speaking of troops, focus at first on Ogre Bulls, then Gnoblar Trappers for some ranged capability.

Before ending your first turn, negotiate a Trade Agreement with the neighboring tribes. Greasus' status as Overtyrant gives him a bonus to relations with all Ogre factions, so you should have little trouble getting them to accept. This paves the way for alliances and confederation down the road and frees you up to expand into Dwarf or Orc lands.

Getting Started As Skrag The Slaughterer 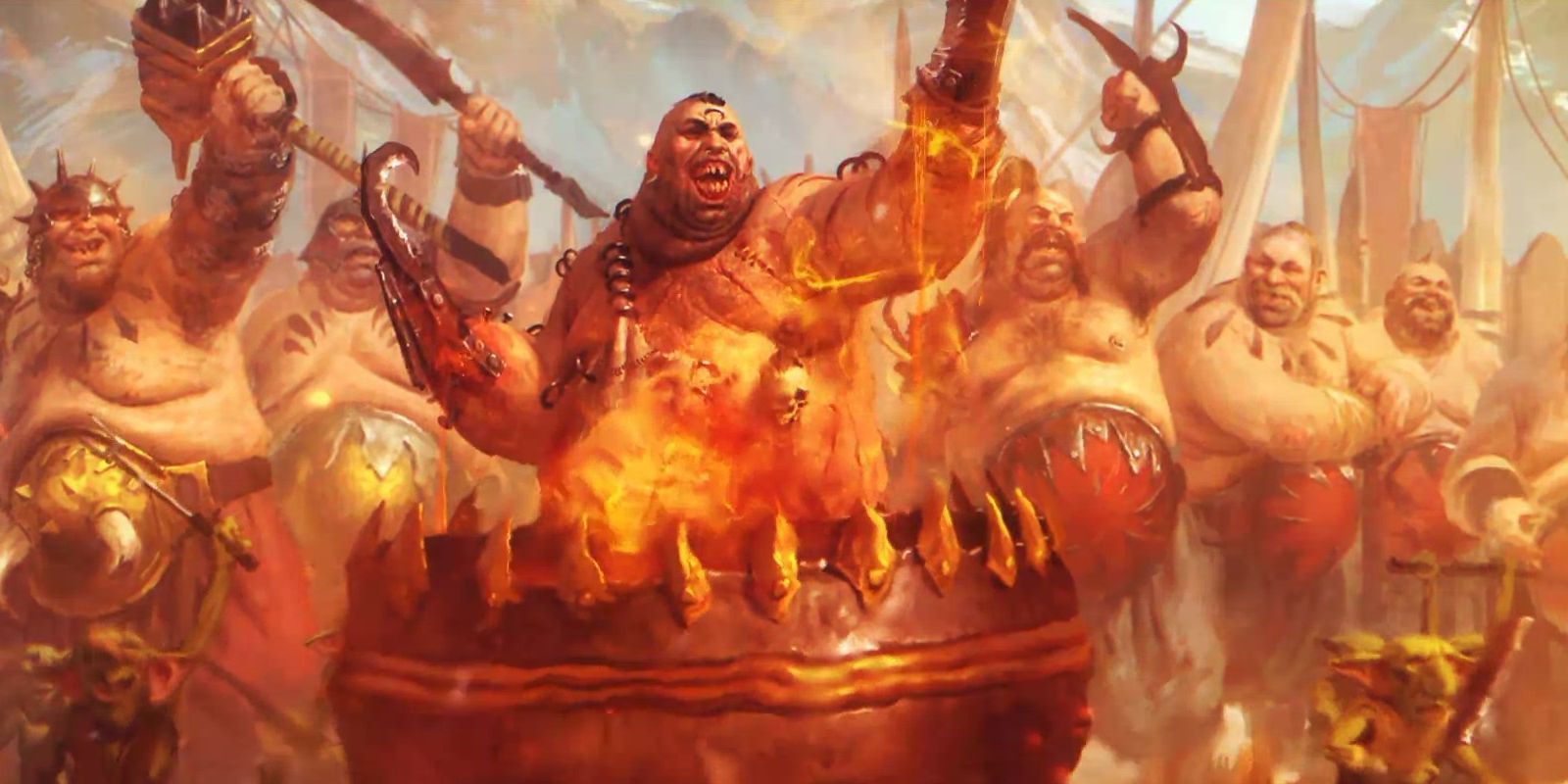 Skrag has a much more dangerous starting position than Greasus. With sturdy Dwarf holds on one side and the Imperial capital of Altdorf on the other, a single misstep could see your tenuous hold on the region lost. Your sole settlement is small, so the first order of business is securing Karak Azgaraz, followed by Karak Ziflin.

Thanks to Skrag's inherent movement bonus, you can defeat the Dwarf army in your territory and take Karak Azgaraz in the same turn. After that's done, upgrade the Stew Kitchen in Gristle Valley and construct a Muck Trench to provide additional defenses in case the Empire decides to attack.

Since your first opponents are Dwarfs, Gnoblars are useful as Ogre weapons have trouble penetrating armor. Recruit a few extra units of the little guys and keep them near Skrag, so he can keep them in line. Use your starting Gorger units to handle the Dwarfs' elite units, and your Bulls can act as backup and support or run down fleeing foes.

The Ogre Kingdoms cannot build siege engines such as battering rams. Keep this in mind when preparing to attack a Dwarf hold or fortified city.

Before you lay siege to Karak Ziflin, march past it and set up a camp midway between it and Blackstone Tower. This will give you plenty of support (and, more importantly, meat) while you lay siege to both those settlements. If the Dwarfs march out to fight you in the field, so much the better – consider it a meal delivery!

In all likelihood, though, you'll have to siege down Karak Ziflin over a long period if you hope to take it, so a camp nearby is necessary to keep your troops fed. While the siege is ongoing, continue to upgrade the camp with buildings that will benefit the nearby army such as the Camp Pot and Gnoblar's Box.

Once Karak Ziflin and Blackstone Tower are under your control, you can continue to expand within the mountains or prepare to attack Altdorf. You may be able to secure an alliance with the Skaven of the mountains, but if you decide to conquer their settlements instead be sure to leave Gristle Valley well-defended. Karl Franz and his army are never more than a stone's throw away from your border.