Home » News » Top Of The Table – Wonder Woman: Challenge Of The Amazons

Top Of The Table – Wonder Woman: Challenge Of The Amazons

Ask anyone who plays a lot of cooperative board games (or designs them), and they’ll reveal one big problem that always seems to crop up. In a game where everyone is working together toward a common goal, it’s often far too easy for a single player to become the “alpha,” directing the action and extending his or her control over the game by dictating what everyone should do in each round. It’s not always malicious and selfish – after all, everybody wants to win, and maybe that one player really does know best – but it has the unfortunate side effect that everyone else starts to feel left out and without agency, and that’s no fun.

Wonder Woman: Challenge of the Amazons is a game I like for a lot of reasons. At its core, it’s all about taking on the role of Wonder Woman and her friends, and then ranging out across the island of Themyscira to cooperatively confront one of the familiar foes from the comic book fiction – Ares, Circe, or Cheetah. The board game features some beautiful components, a smart sense of pacing, and the multiple supervillains lend replayability. But without a doubt, the thing that most impresses me is the game’s approach to the alpha player problem.

Adopting the role of the peerless Amazonian warrior women, the game bakes in a period of strategizing and planning into the start of each turn, which does indeed give outspoken players a chance to lay out their grand plans, based on available cards and actions that each player can see. But after that, as the battle begins, additional cards come into play for all the players. And at this point, all the group strategizing must end, and each player’s combat instincts must kick in. To reflect that idea, everyone gets to look at that broader array of available action cards that were not available during the strategy phase, and then make their own plan, even if that means going rogue from the original strategy. It’s an idea that provides tremendous agency to each player, and also results in awesome surprises as the battle moves in different directions than expected. It’s a brilliant solution to a stubborn dilemma. 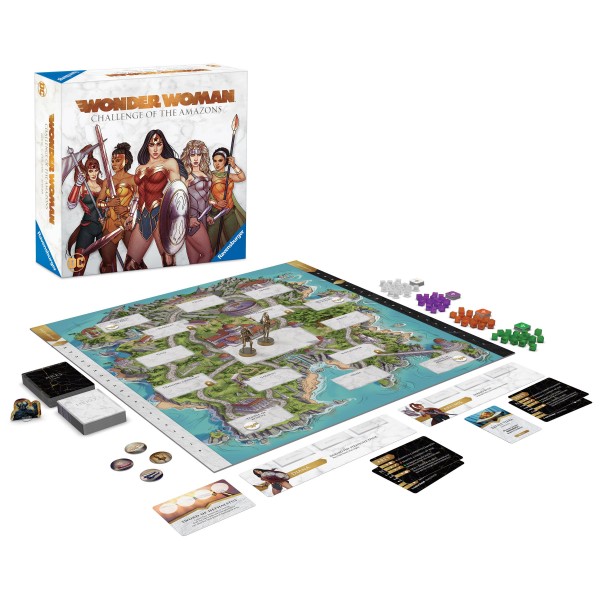 Action resolution is deterministic, with clear outcomes to actions. There’s very little randomness inserted since there are no dice for combat or other luck-based elements. Instead, you can have high confidence that your actions around the board will have the desired result. Every action’s outcome is resolved by having enough of a designated icon for traits like leadership and agility. Need to take out bad guys? You need a certain number of vigor icons on your cards. Is there a blockade preventing you from reaching a desired destination? Then hopefully you have enough agility. Because of this dynamic, the appeal of turn-to-turn gameplay is about relatively pure strategy and planning and trying to predict the flow of enemy forces. The only thing you can’t confidently plan on is the villain’s card draws, which deploy new problems onto the board.

I really enjoy the distinct traits of each hero character. Diana’s take-charge nature gives her the chance to move a space during the strategize phase. Meanwhile, Nu’bia’s honed instincts for combat are reflected by two additional face-down cards in your battle plan, giving her increased flexibility to call audibles once the conflict begins. Artemis gets to start the game with one of the powerful relics of the island already in hand. In each case, it’s just enough to give each character a distinct identity within the gameplay. If I have a complaint, it’s that the broader flavor text and components do a poor job of introducing and selling each of these powerful protagonists. Even some devoted comic fans will have trouble recalling characters like Mala and Philippus, and just a bit more description would have gone a long way to enriching the thematic immersion.

The three “big bads” each offer amusingly divergent scenarios. Cheetah demands big coordinated attacks, as she slips away after each encounter to an entirely different place on the island. Circe circles Themyscira, transforms your fellow Amazons into animals, and sets up magical beacons that must be pulled down to drop her magical shielding. And the final blow against Ares can only be struck by a hero who has toured the island and charged up the Sword of Hephaestus at important monuments and temples. While I’d be more than happy to see even more enemy scenarios in this core box, the initial three are all fun and challenging in their own right, and should maintain your attention for lots of runs. 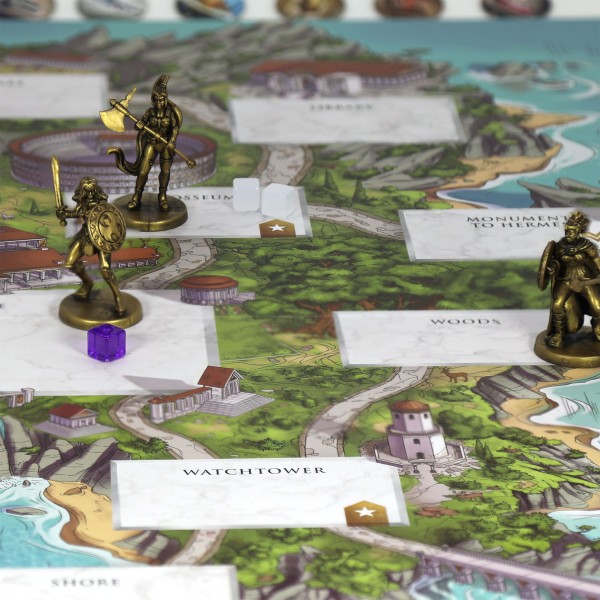 While I don’t always feel compelled to highlight a game’s components, I was especially pleased with the clean presentation, stylish art, and cool miniatures that are included within Challenge of the Amazons. The cover art talents of Jenny Frison (who has an established history with envisioning the character for comic book covers) captures the stoic and heroic vibe of the Amazons. Internal cards and board components feature a soft white undertone that calls to mind marble columns. And the well-sculpted miniatures of the heroes are all painted in a deep bronze color, suggesting the classic statuary styles of Ancient Greece, and further accentuating the mythological vibe.

Two to five players can enjoy a run at defending Wonder Woman’s home, and my playthroughs suggest a playtime of between one and two hours, at least after you grasp the basics, and depending on how long your gaming group likes to sit around and strategize each round. The game has only just been announced, and if you’re reading this at publication, you may have a few weeks to wait until it shows up to purchase.

If your group likes cooperative challenges and mythological overtones, it’s well worth tracking down. It also features another potent distinction that might mean a lot to certain players – it’s one of the very few games I can think of with an all-female cast of playable characters, and does a great job of reflecting that branch of the DC comics fiction in a way that feels both empowering and appropriate to the setting. 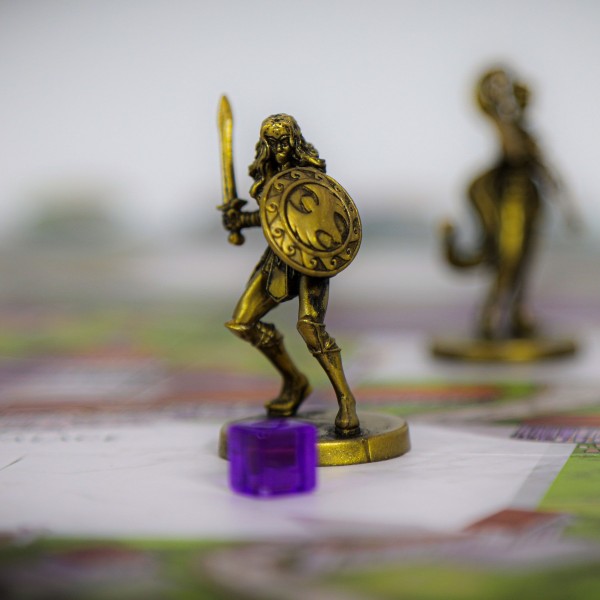 For many players, the cooperative experience can be a game-changer to being able to enjoy a night of gaming; if you haven’t yet tried that playstyle out, Wonder Woman offers an excellent foray into teamwork and personal moments of triumph that benefit everyone at the table.

If you’re looking for other board games to fill your table on your next game night with friends or family, don’t forget to click into the Top of the Table hub from the banner below. You’ll find years of recommendations and suggestions for the best in the board, card, miniature, and role-playing game field, including round-ups of some of the best releases from any given year. If sifting through those articles is intimidating, you can also always reach out directly via email; I’m always happy to hear what you’re looking for, and hopefully pinpoint the next great game you can share with your group.

Matt Miller explores the ever-expanding world of tabletop board, card, miniature, and role-playing games in his column, Top of the Table. Check back every other Friday for the best in the hobby scene.