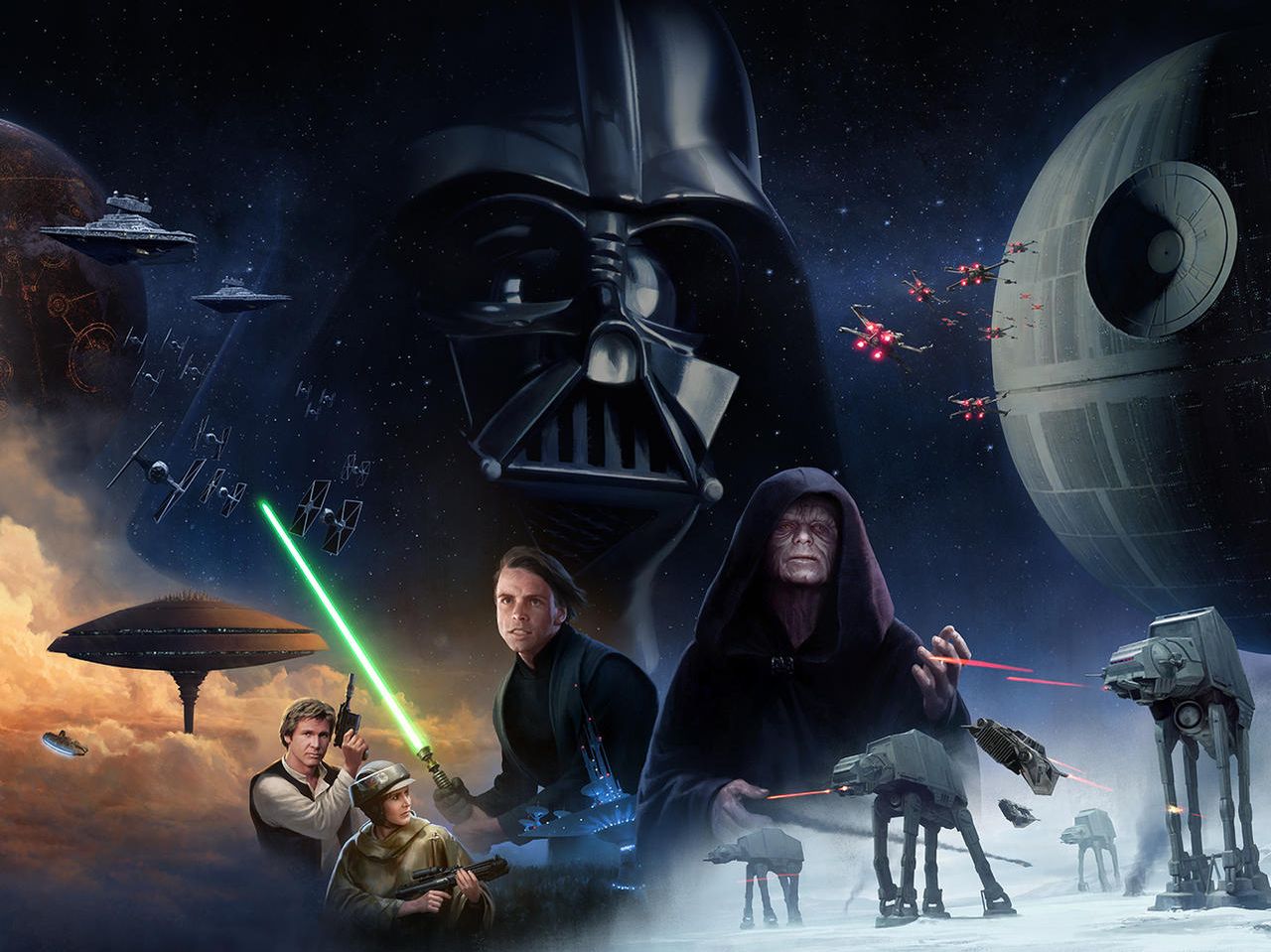 If you think there’s a lot of Star Wars video games you should how many tabletop games there are, from card games to board games to full-blow RPGs.

If you’re not overjoyed at the thought of the studio behind Heavy Rain making a Star Wars game, then there are alternatives to video games when it comes to the world’s favourite sci-fi franchise. Tabletop games have played a pivotal role in the history of the franchise and it’s no surprise to find that that legacy is being continued today through multiple different products.

Although the new Book of Boba Fett show is on Disney+ this Christmas, with many more to come next year and beyond, there’s no sign of a new movie any time soon. But there are plenty of board games and role-playing titles to keep you engaged with the galaxy far, far away.

Star Wars Monopoly (and Risk and Trivial Pursuit and just about any other traditional board game you can think of) already exist but if you want something with a bit more depth and originality then there are plenty of options to interest all tastes and levels of experience.

The scale of this two-player miniatures game in huge, as in Armada you’re commanding an entire fleet, including giant capital ships and squadrons of fighters. This is a slow burner of a game but still dramatic and engaging.

Using specially designed rulers to manoeuvre through space, you can re-enact classic Star Wars space battles using a command stack which assigns four command actions to your pre-painted (and very expensive) ships. But you have to think ahead and consider how these will be revealed during your turn, so as to give yourself the advantage. It’s compelling tactical play of a sort Star Wars video games have rarely ever touched on.

If you’re more interested in close range starfighter combat then the X-Wing Miniatures Game is for you. Here you can choose from a variety of Rebel, Imperial, and independent vessels, including X-wings (who would have guessed!), TIE Fighters, and a huge range of much more obscure craft.

You play using a cleverly designed action dial, where you secretly select a speed and manoeuvre to perform, and then see how that compares to what your opponent is doing. There’s plenty of scenarios too, with different victory conditions to keep things interesting.

It’s easy to turn this game into a hobby, with the waves of releases including such classic ships as the Millennium Falcon and obscurities such as the Assault Gunship (aka Star Wing) from the old X-Wing video games. This is a super accessible entry point into miniature gaming and pure catnip to anyone with a love for Star Wars spaceships.

If your house isn’t already full of miniatures, Star Wars: Legion gives you some classic characters to play and paint, including Luke Skywalker and Darth Vader. More focused on ground combat than X-Wing and Armada, this is closer to Warhammer in terms of gameplay and miniatures, since you can also buy dedicated paint sets with suggested colour palettes.

Naturally, you can play out iconic battles from the original trilogy, in locations such as Hoth and Endor, with two-players controlling either the Imperial or Rebel armies. Skirmish style mechanics are supported by your strategic choice of units, and you can also command support vehicles like landspeeders and AT-ST walkers. Having to paint the figures yourself means the miniatures gaming community has really embraced this game and created some outstanding scenery tables to play on.

This is probably the most popular tabletop Star Wars game at the moment. It’s a boardgame (across two boards) on an epic scale, covering all aspects of the conflict in the Star Wars universe. Think of it like a more epic, space-based version of Risk but with a ticking clock and (probably) less family arguments.

Rebellion is best played with four players, with two controlling the Empire’s forces in an attempt to wipe out the Rebel Alliance, including setting up a working Death Star. The opposing team commands the Rebels, who are outmatched in terms of resources but can call on the help of sympathetic cultures and communities across the galaxy.

The game ends if the Empire wipe out all the Rebel forces, but the Rebels win if they can hold out long enough to successfully inspire a Galactic Civil war and full revolt against the Emperor.

Even though it’s now discontinued this collectable dice and card game is still one of the best Star Wars tie-ins, with fun, easy-to-pick-up mechanics reminiscent of the classic Netrunner game. Moving into more psychological territory than some of the other games, two players face off against each another on opposite sides of the Force, either Jedi or Sith.

Depending on which side you’re fighting for you have access to unique abilities, as well as the chance to rope in support from allies drawn from a variety of different Star Wars eras. The sequel trilogy may not be popular with all fans but the starter pack with Rey and Kylo Ren is very good and a great introduction to dice and card games in general.

Not all Star Wars games are about the Empire versus the Rebel Alliance; in the Outer Rim you get to play around in the seedier side of the universe, as a smuggler or bounty hunter. A game for one to four players, you choose scenarios to tackle as a team, but you also have character goals that need to be attended to separately.

This game may not play out on a galactic scale, but players have a big enough sandbox to produce a sense of dynamic narrative and enough choices that you can always be sure of plenty drama and danger, as you try to track down your quarry and upgrade your ship.

You have to watch out for warring factions though, while taking part in some sneaky smuggling runs to gain reputation – until you win the game by collecting 10 fame points and cement your status as a living legend. There are rumours of a Han Solo Disney+ series in the works but until it’s confirmed this allows you to live the life of a Star Wars scoundrel via the medium of board games.

What did you really ask Father Christmas for this year? A Death Star? Yeah, me too. This co-op board game wants to foil our Christmas plans as its entire rationale is players battling against the dark side to stop the Death Star from being built. A legless (no, not in that way!) Darth Vader sits in the centre of the board, menacing players, as he tries to make his planet destroyer a reality. Two to four players each chose different Rebel cells to control and pick a Rebel base on planets such as Jedha, Tatooine, Lothal or Eadu.

You must use character traits include leadership and intelligence, with the support of resources and allies, to coordinate a plan to defeat the agents of the Empire before it’s too late. Star Wars: Dark Side Rising may look like a less serious and strategic affair than some of the other games listed here but it’s fun and full of tension, as you fight to stop the Death Star from becoming operational.

This is the opposite to Dark Side Rising, in that the Death Star has just been destroyed and you must deal with the immediate aftermath on and around the Rebel base on Yavin 4. This tile-based dungeon crawler has you trying to complete scenarios such as sneaking into Imperial bases on covert missions, as you work towards the game’s finale.

You can use the companion app to control an opposing force if you want to play alone or if no one wants to be the bad guy and you’d rather enjoy things co-operatively. The game has a great sense of storytelling and progression as both sides gain skills for their characters, that allow them to complete individual objectives. The game ends with a stand-off between the Rebels and Empire to see who will emerge victorious, making this a fan favourite that has won many boardgame awards.

I hold the prestigious title of coming second to last in the 2018 UK Carcassonne Championship but it’s still a game I play almost weekly. This is a very accessible and inclusive combination of two of my favourite things. Carcassonne vanilla involves laying tiles to create medieval cities or forests and then adding populations to collect points.

In this Star Wars version settlements become asteroid fields and roads become hyperspace trade routes. Just like Catan I am keen to have a go at every variation of the game available and this is a great looking and enjoyable addition to the Carcassonne franchise.

Originally published by West End Games, starting in 1987, this was almost the only official merchandise for Star Wars at the time. Based on the simple D6 mechanics of the Ghostbusters RPG it was seen as not only a great way to spend a Saturday but an authoritative resource for Star Wars canon.

As well as detailing the aliens, vehicles, and technologies from the films, it also added a number of new ones as well. All of this was then used as reference material for the start of the original Star Wars expanded universe, including the Thrawn trilogy novels in the early 90s and the video games of the era.