TigerGraph, a Redwood City, California-based startup developing graph database tools, today announced that it’s raised $105 million in series C funding. The company says it’ll put the proceeds toward product R&D, including the forthcoming TigerGraph Cloud on Google Cloud Platform, as well as expanded multiregional support on Amazon Web Services and Azure. TigerGraph also plans to grow its reach with local support in Asia, Australia, and New Zealand as it scales up with additional hiring in the Americas, Europe, the Middle East and Africa, and Asia-Pacific.

Markets and Markets anticipates the graph database market will reach $2.4 billion by 2023 from $821.8 million in 2018, and analysts at Gartner expect that enterprise graph processing and graph databases will grow 100% annually through 2022, facilitating decision-making in 30% of organizations by 2023. Graph databases and graph-oriented databases leverage graph structures for semantic queries, with nodes, edges, and properties that store and represent data. They’re a type of non-relational technology that depicts the relationships connecting various entities — like two people in a social network, for instance — and that can analyze interconnected data.

While at Teradata and Twitter, TigerGraph CEO Yu Xu focused on creating large-scale, distributed systems for connecting and analyzing relationships among entities (e.g., customers, products, orders, payments, and suppliers). In 2012, Xu set out to design a general-purpose, scalable, distributed database capable of connecting and analyzing datasets and powering AI and machine learning pipelines, which became the TigerGraph platform.

TigerGraph’s SQL-like graph query language enables data exploration and analysis. Its architecture employs compression to minimize memory overhead; graphs are structured such that vertices and edges act as parallel storage and computation units, each of which can hold any amount of arbitrary information. This allows TigerGraph Cloud to run multiple engines hosting graphs with different partitioning algorithms, queries to which a front-end server can automatically route based on type. 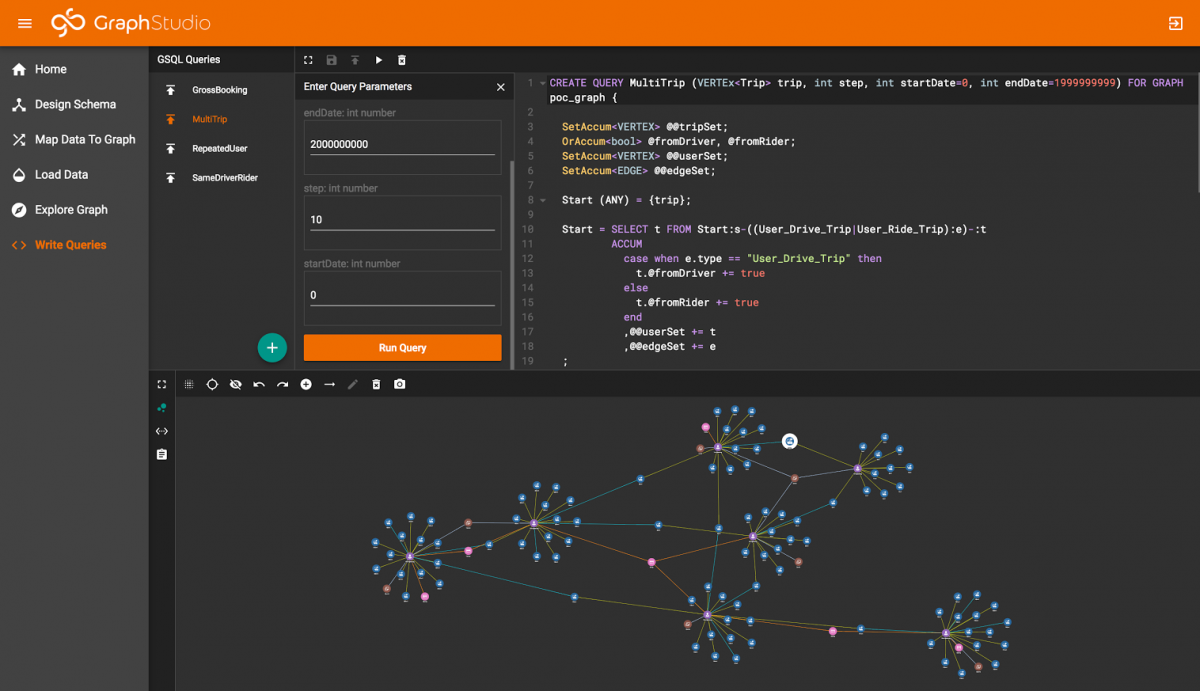 Above: A snapshot of TigerGraph Cloud’s dashboard.

TigerGraph’s cloud scales up to tens of terabytes, 100 billion vertices, and 600 billion edges on the high end, with support for more than 100,000 real-time deep link analytics queries and 50GB to 150GB of data per second on a single server. On a cluster of 20 commodity servers, TigerGraph claims it’s capable of streaming over 2 billion daily events in real time.

TigerGraph recently rolled out a free tier of its graph database service that lets customers store up to 50GB of data in a database running on-premises, matching what it already offered in the cloud. And with version 3.0 of its namesake engine, TigerGraph introduced no-code schema migration and Visual Query Builder, a drag-and-drop front-end for query development.

Startups like Neo4j, MongoDB, Cambridge Semantics, DataStax, and others compete with TigerGraph, in addition to incumbents like Microsoft and Oracle. Even Amazon threw its hat in the graph database ring in November 2017 with the launch of Neptune, a fully managed graph database powered by its Amazon Web Services division.

But TigerGraph claims to have experienced “massive growth” despite pandemic-related headwinds, more than doubling revenues and customers over the past year. The company says it’s “deeply involved” and on the steering committee for the development of the Graph Query Language (GQL) standard, a graph query language standard first proposed and adopted in September 2019, and that it plans to support GQL “immediately” upon its finalization.

“The fact that our latest funding round is a record funding round for the graph database category underscores one important business need: Enterprises have long struggled to answer business logic questions on real data in real-time,” Xu told VentureBeat via email. “As they have been hampered for years by infrastructure complexities and database limitations. We are excited to spearhead a solution to this problem, and we’re changing how the industry thinks about connecting and analyzing data. TigerGraph equips companies with an enterprise graph ‘brain’ that uncovers new insights within their cloud and on-prem data. This new round of funding will further advance our offerings, allowing us to expand into more markets and arm businesses of all sizes with the true power of graph.”

TigerGraph’s latest funding round was led by Tiger Global. It brings the company’s total funding raised to date to over $170 million following a $32 million round in September 2019.