The Witcher 3: The 15 Best Cities In The Game, Ranked

Despite being portioned off into several closed regions, the game world of The Witcher 3: Wild Hunt was revolutionary for its time. It was one of the few games which featured fully interactive open-worlds where you can seamlessly enter buildings without loading screens.

Moreover, the world was made more immersive with NPCs having actual jobs and doing their work as normal human beings do. To date, not many new games could match the cities of The Witcher 3 – they even manage to put the cities and the open world of The Elder Scrolls games to shame. In order to fully appreciate just how well-crafted The Witcher 3's cities are, here are the best of them, ranked, so you know where to spend your time when not chasing monsters, sorceresses, or miracle daughters.

Updated on January 12th, 2022 by Ritwik Mitra: The Witcher 3 features one of the biggest open worlds of all time, littered with cities and settlements that are an absolute joy to explore. While the open world of the game truly shines in its massive areas with a ton of freedom to explore, it's the urban corners of the game world that are the most interesting. Players who want a rundown of the best settlements in the game should definitely check out the following areas in The Witcher 3. 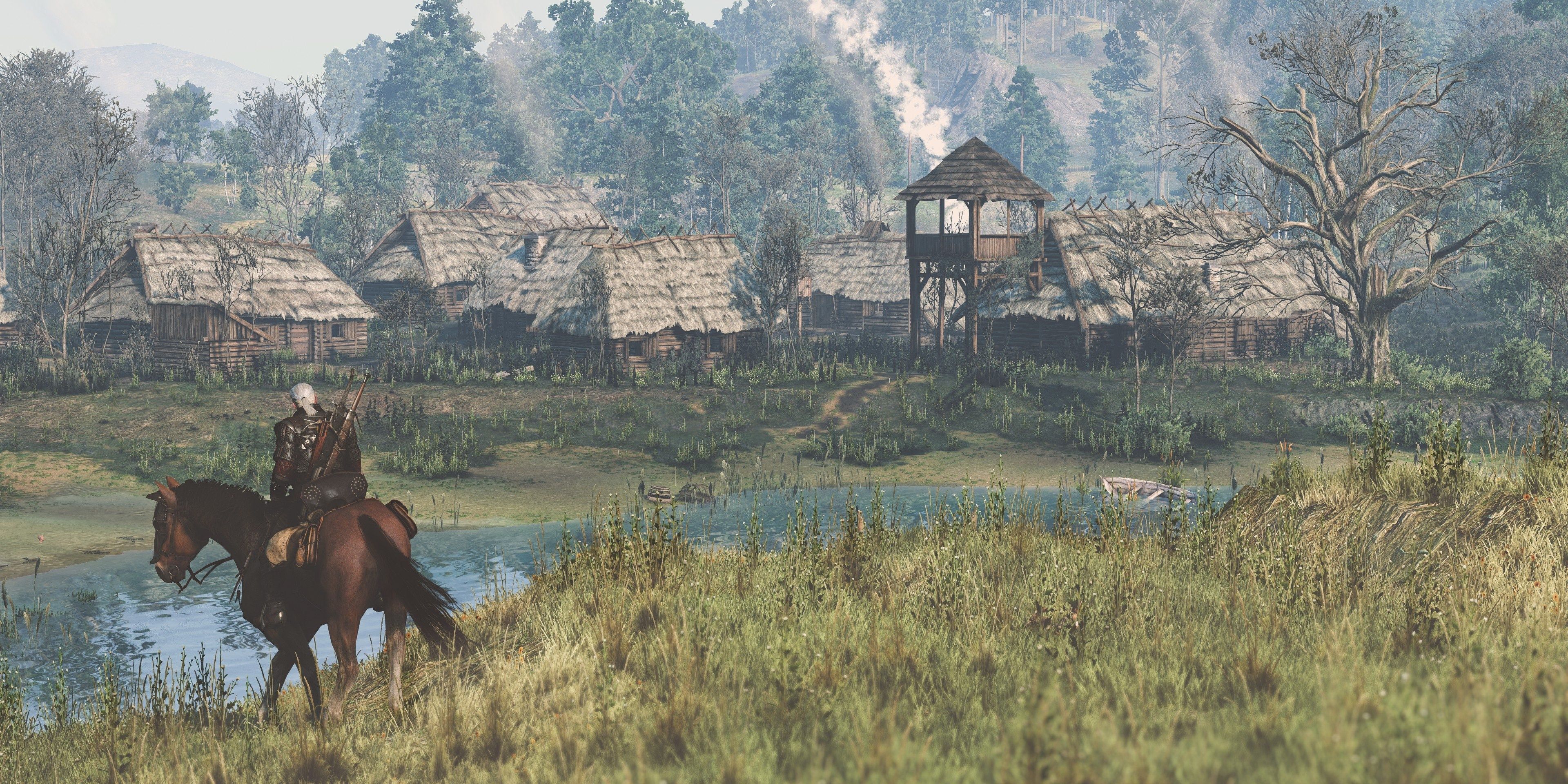 While Lindenvale might be more of a town than a city, it's still a fun place to stumble upon and explore. Each and every corner of The Witcher 3 is full to the brim with content, and Lindenvale is no exception.

Due to its size, most players will be done with exploring this area sooner rather than later. However, it's still a fun distraction to keep the open-world fresh and engaging. 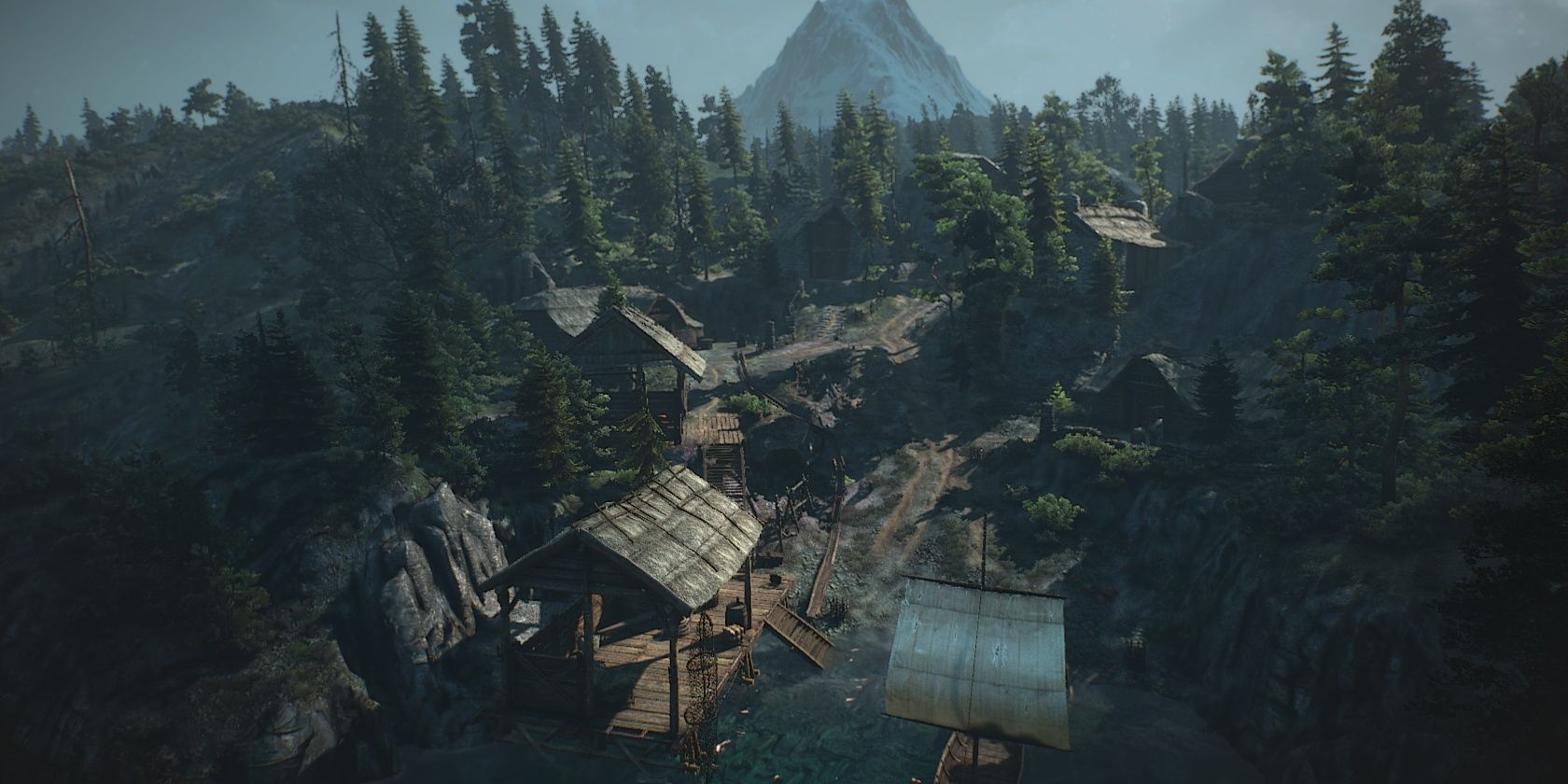 Skellige is full to the brim with some truly beautiful locations to explore. Arinbjorn is one such place where the beauty of this area shows in even the most isolated corners of the world.

Arinbjorn is a brilliant place that is even better for fans of Gwent thanks to how many valuable and unique cards players can find in this location. Given how vast Skellige is, most people miss Arinbjorn, which is a real shame. 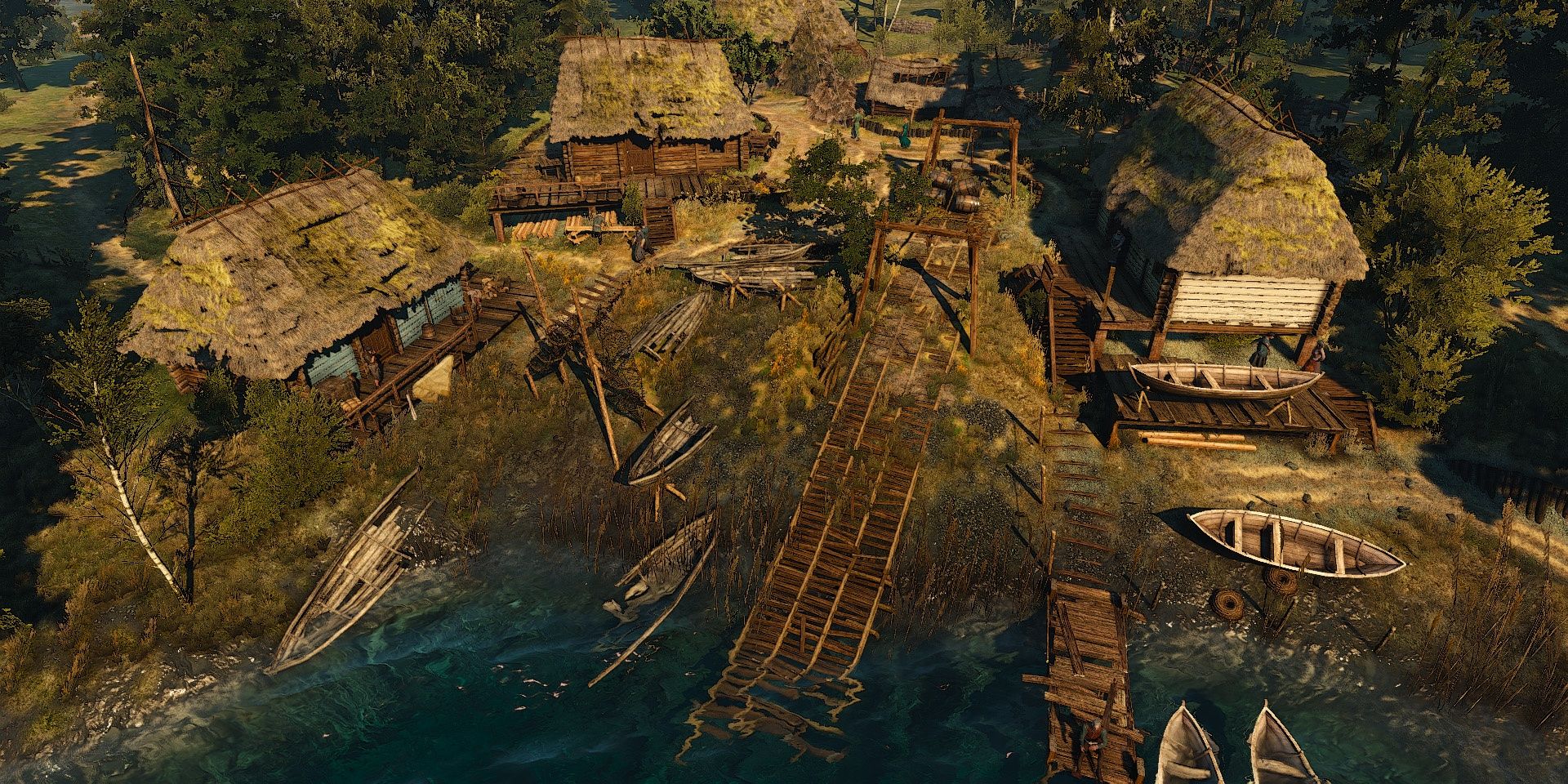 Velen is an area full to the brim with small settlements to explore. Claywich is one such area that most people chance upon in their travels before moving on.

There's not really a lot to do in this area, with the place being more of a village to break up the monotony of the open plains. However, even if it's just meant as a small bump on the road, it's surprisingly detailed and beautiful. 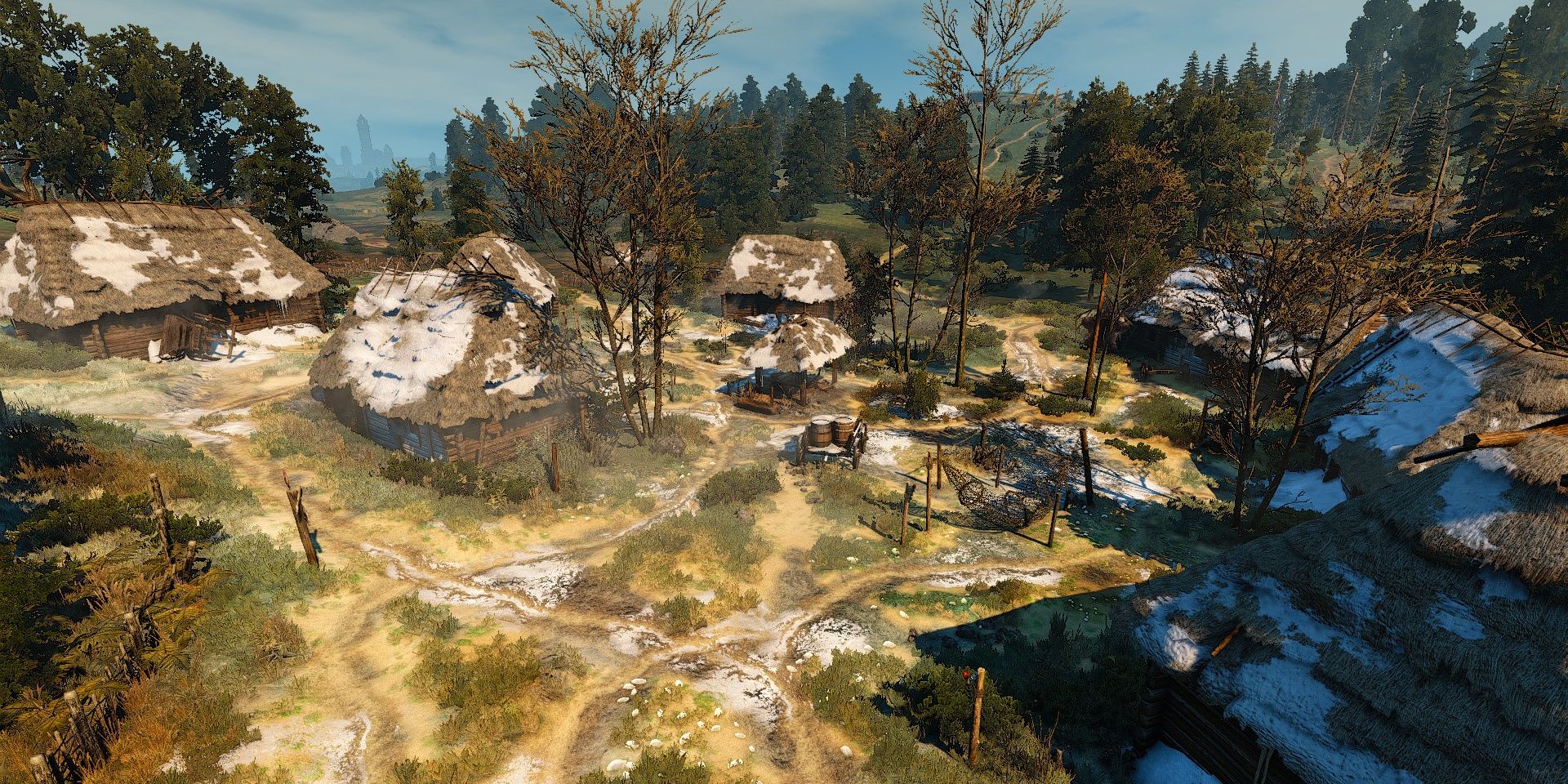 An abandoned village that was clearly hustling and bustling at one point, Heathertown is like a ghost town in The Witcher 3. The area was a casualty of the Wild Hunt, who hunted down a Nilfgaardian spy here in order to get information on Ciri.

While this town is nothing more than the scene for an investigation in The Witcher 3, it's still pretty important regardless. After all. the clues that Geralt got here brought him one step closer to meeting Ciri once again. 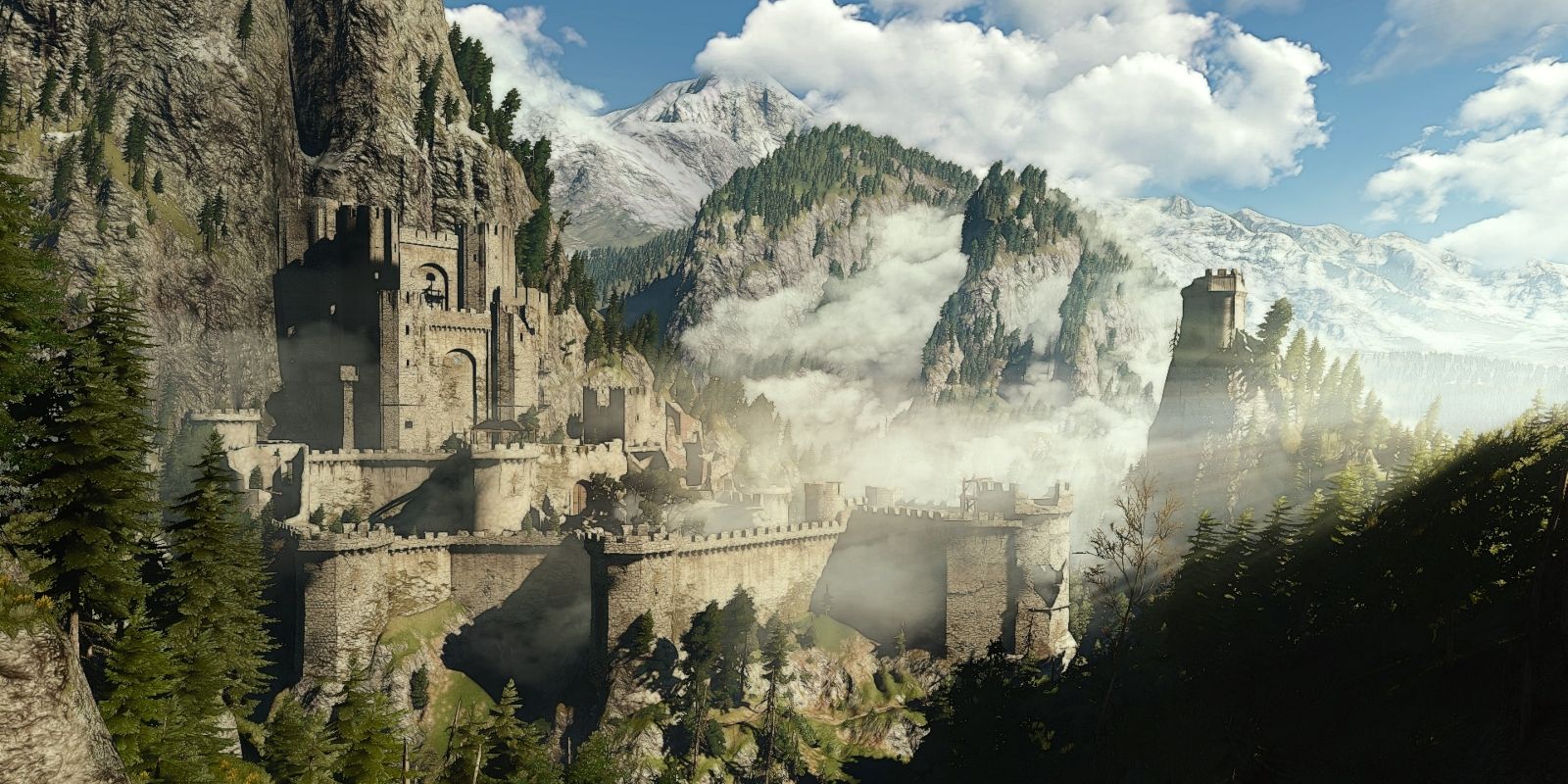 Kaer Morhen is not a city in the literal sense of the word. However, the fort has a massive legacy and used to house several potential Witchers before the fortress was raided.

Kaer Morhen is still a beautiful location with the area around it also being amazing to explore. The fortress sets the stage for one of the biggest and most memorable battles in the game, which makes this location even more legendary. 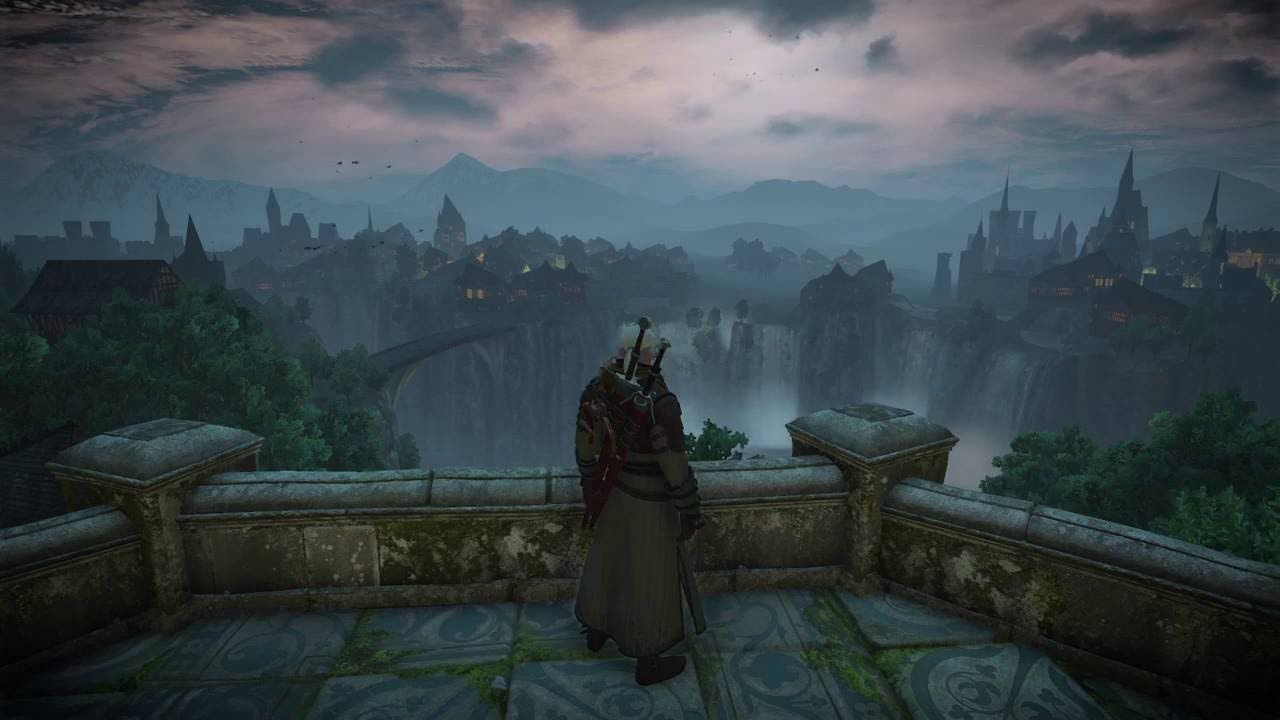 You've probably haven't heard of this city before, and that's because Geralt has only been there in-game for a few minutes. As soon as you turn Uma back into that stuck-up mage elf with a crush on Ciri (his name's Avallach, by the way) he'll take you to his homeworld in another dimension.

Both of you will enter a portal to Aen Elle, specifically in its capital city of Tir ná Lia, which is surprisingly gloomy and grey due to the impending apocalypse for the Aen Seidhe still living in Aen Elle. You only get a brief glance at their depressing city, but it's enough to understand their motivation for wanting Ciri or invading a greener and safer world. 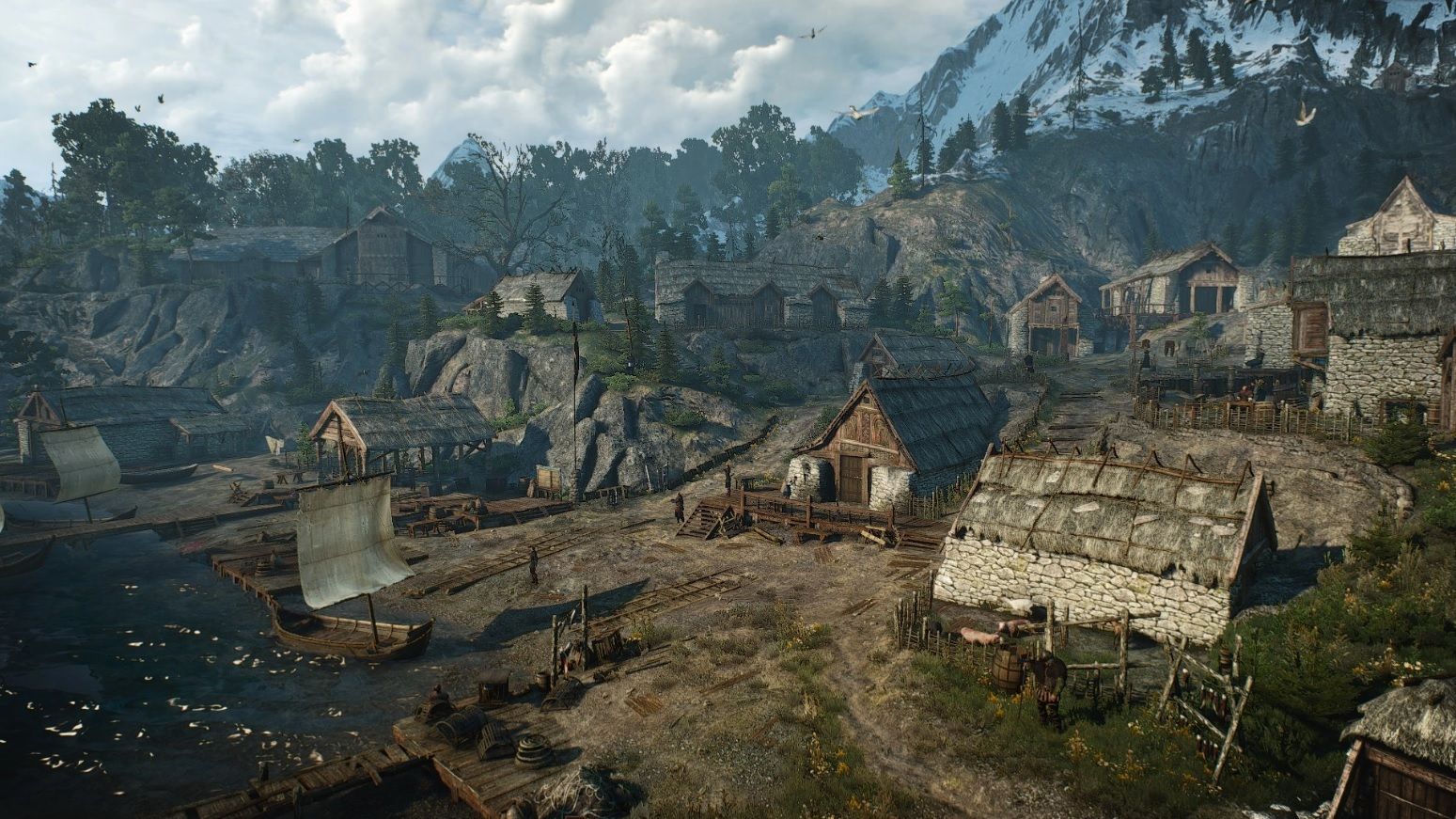 Spikeroog is actually an island of the Skellige isles, but it consists of two clans each in their own respective villages. These two main villages are Svorlag and Hov, but the whole island itself is a sizable hub of interesting secondary quests including some key points of interest like an old watchtower and an abandoned hut with many dark secrets.

Still, the island of Spikeroog is most notable for the "Possession" side quest which pretty much the scariest horror quest you can take on The Witcher 3. It involves Geralt dealing with a demon called a Hym, who only appears in-game as a frightening and horrific shadow. It's definitely one of the most unique quests in the game and does well to set Spikeroog apart. 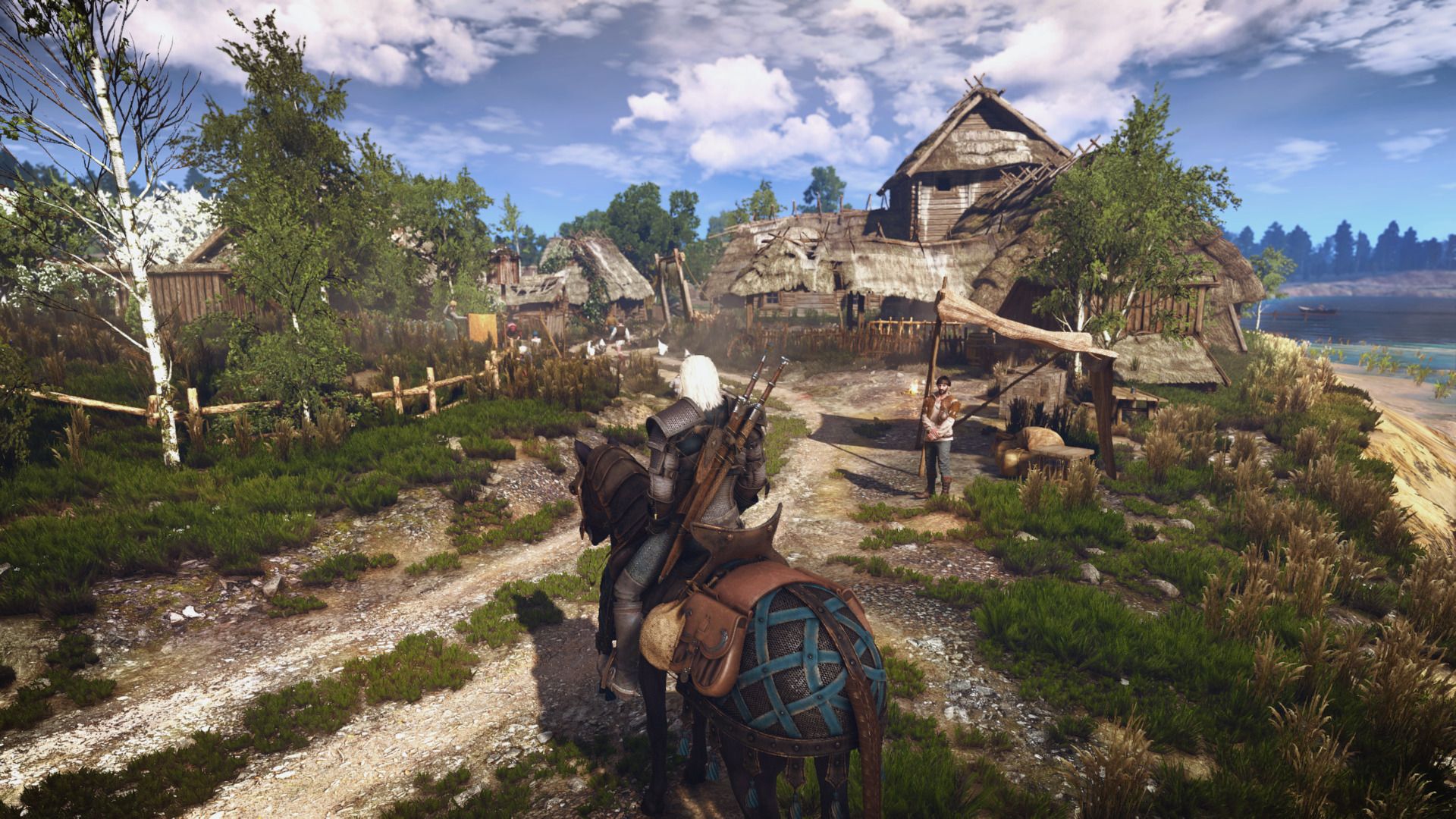 Both of these locations are in the same country anyway, so we'll lump them together since the only thing you can see in Vizima is the palace. Meanwhile, White Orchard serves as the primary tutorial or staging point of the game, and rightfully so as it introduces players to the politics and war-torn countrysides of The Witcher 3.

The tension in White Orchard in particular is like a bomb with a short fuse. You'll frequently see the effects of colonization of the once-proud people of Temeria. It's also got some memorable introductory side quests like searching for an old lady's pan– an endeavor that quickly opens up an espionage conspiracy. 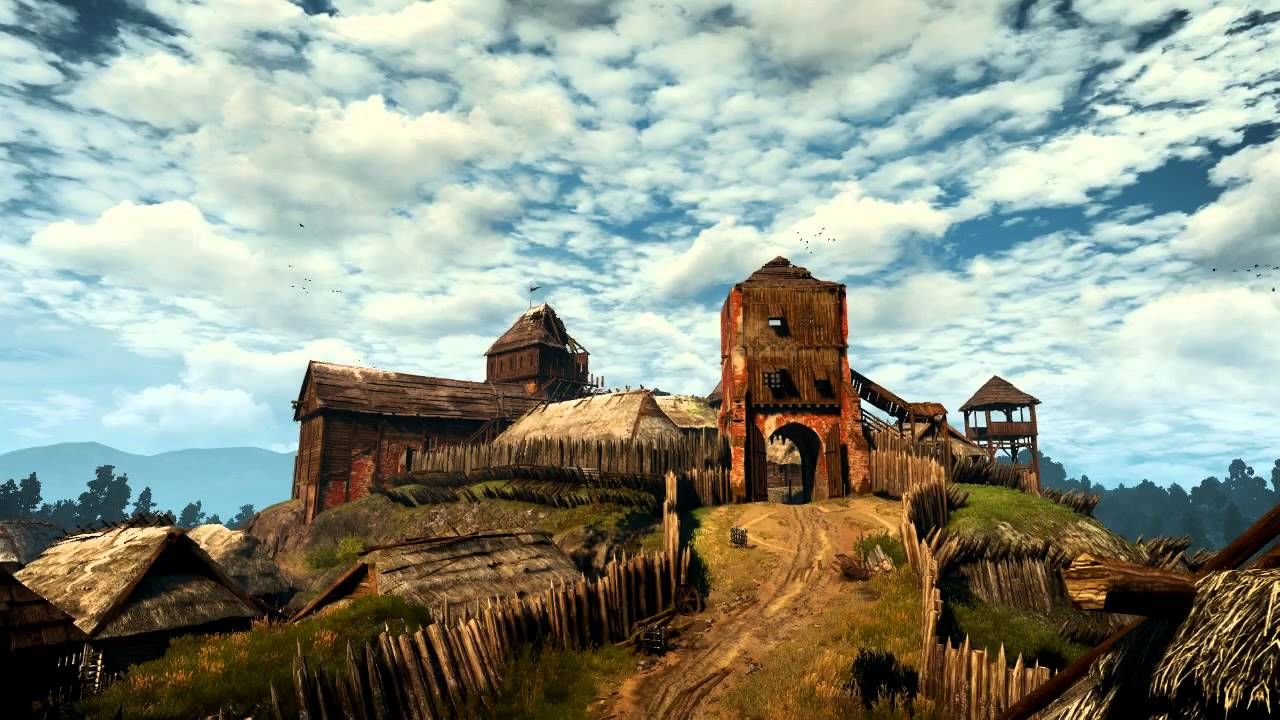 Crow's Perch is not exactly a city. It's mostly a palisade or a small fortress governed by the Bloody Baron, but it's large enough to be considered a town anyway since people actually live outside the Baron's walls. In any case, you won't miss this location since it's part of the main quest.

During your stay at Crow's Perch, you're also introduced to one of the strongest points in the game's story, which is the internal family dispute of the Bloody Baron. It's a questline which will leave you scarred and callous since all the choices are morally grey. You'll even quickly come to associate Crow's Perch with all the drama and heartbreak of the Baron's questline, enough to make you do deep sigh when entering its gates. 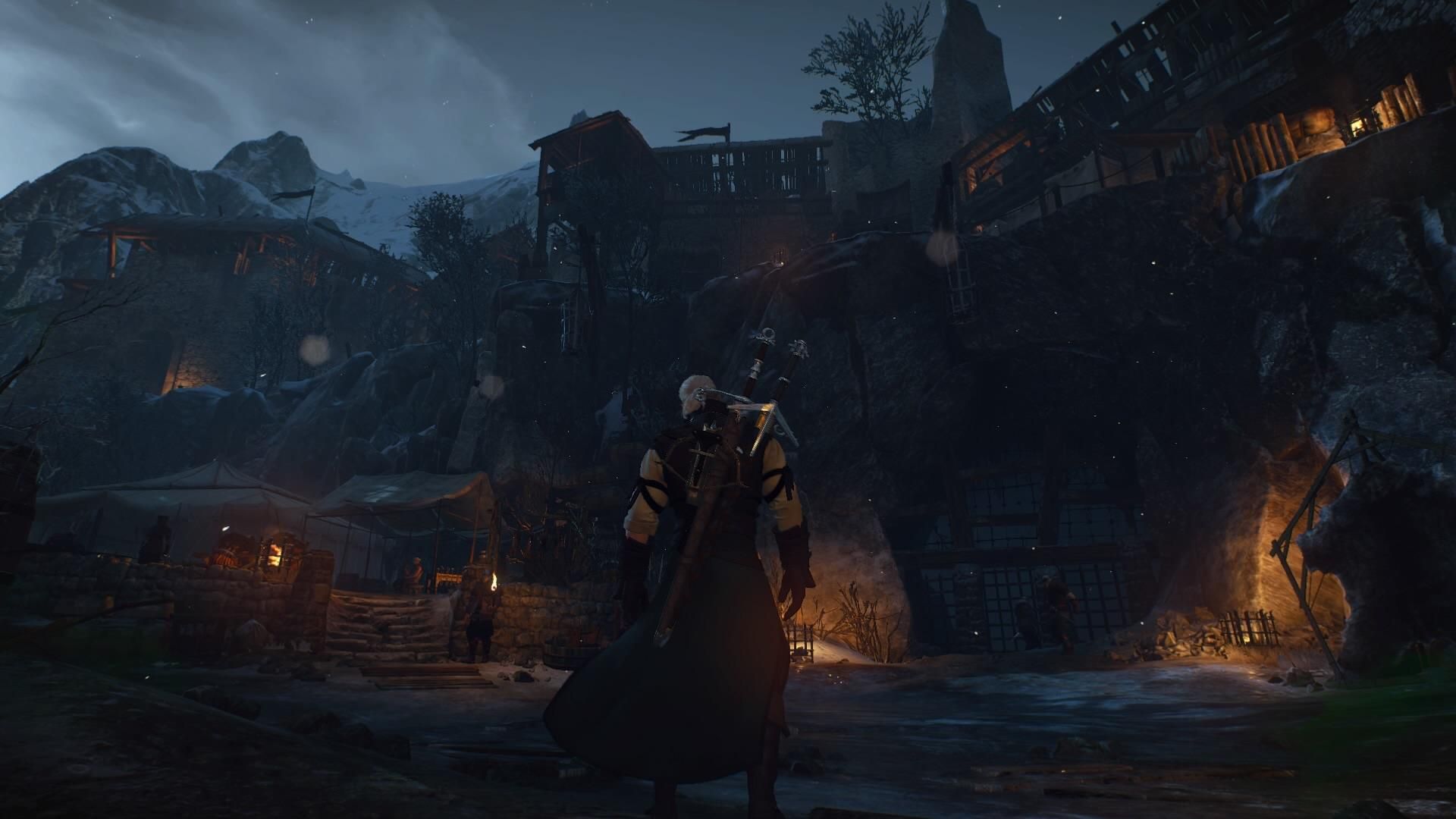 Kaer Muire is one of the larger keeps and cities of the Skellige Isles and is governed by the troublesome turncoat Madman Lugos, Jarl of Clan Drummond. What makes this small city and castle a place to remember in your Witcher quests is what happens to you inside, as well as the political implications of you visiting the place.

Once the crown for Ard Skellige has settled upon a worthy head, Crach An Craite will ask you to go to Madman Lugos to ensure his allegiance. Lugos, staying true to his namesake, refuses loyalty to an An Craite and chooses to aid the Nilfgaardians instead. So, it's up to you to make him see the error of his ways – it's too bad he can only see that clearly with his head rolling on the ground. You don't always get to kill royalty on their own turf in The Witcher 3, which is why Kaer Muire will always be a special place. 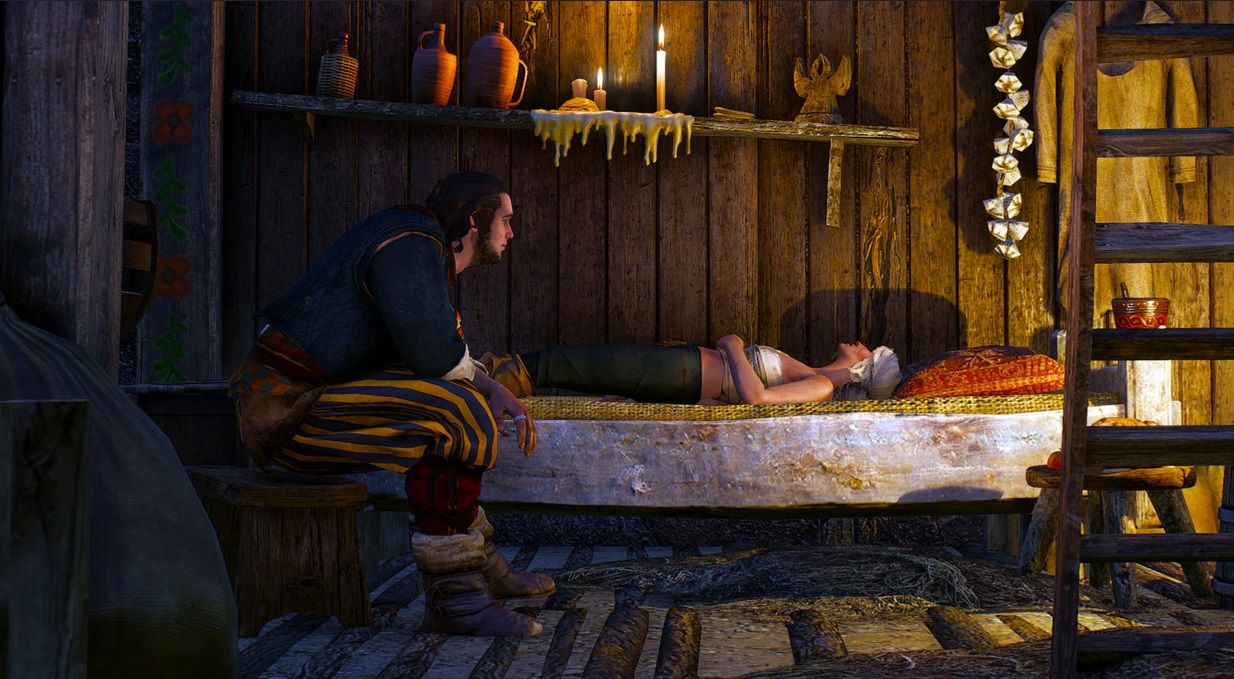 The best part about tracknig down Ciri is you get to see, visit, and interact with many locales in the game world. After all, Ciri has been to one of the most picturesque provinces in the Skellige Isles, specifically the island of Hindarsfjall with a sizable town of its own. There, she partook in the island's customs such as hot baths, massages, and more.

Of course, trouble soon followed Ciri and the once peaceful villages in Hindarsfjall got reduced to icy graves by the Wild Hunt. Moreover, Hindarsfjall is one of the places in the game where Yennefer shows her polarizing way of thinking and behaviour – many sad and important memories happened in Hindarsfjall. 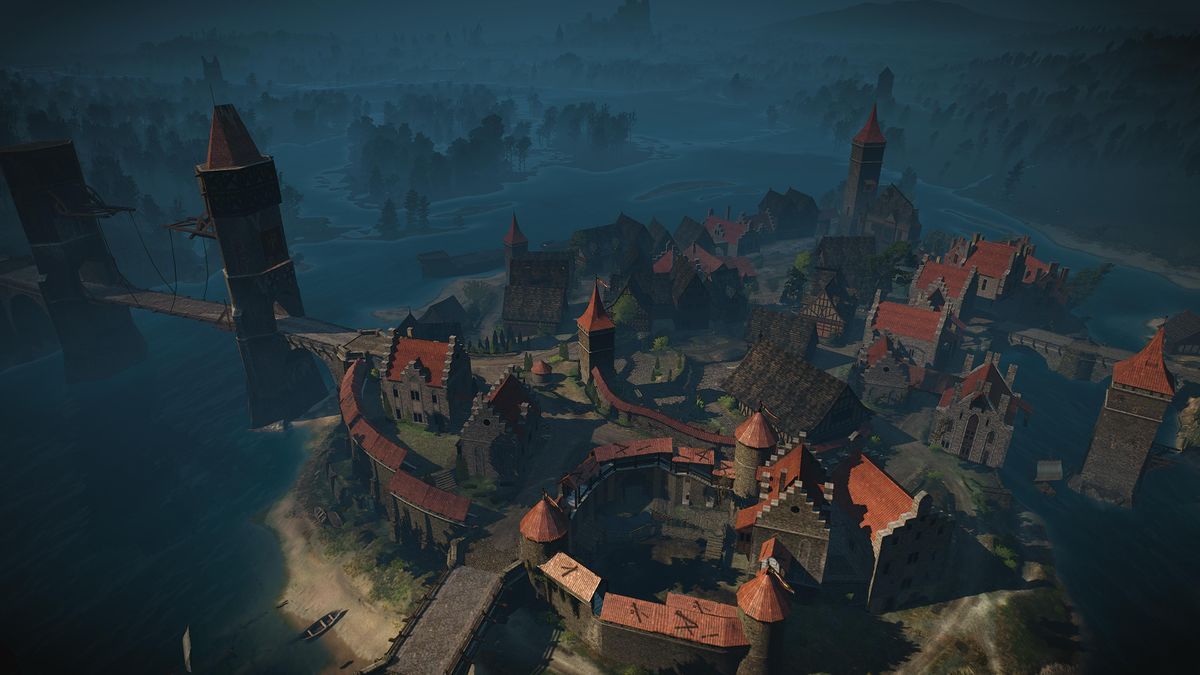 In both the first and second Witcher games, Oxenfurt was mentioned several times and was regarded as a scholarly city where young people of the Northern Kingdoms come to study in colleges. Seeing it in-game is a rewarding fan service for many longtime Witcher fans.

Despite being noticeably smaller than Novigrad, Oxenfurt is packed with all the sophisticated amenities. Even the supposed brothel in Oxenfurt, The Rosebud, is for the more educated taste buds. Don't go looking for it in-game though, it was supposedly cut, perhaps because it didn't suit the atmosphere of the place. In any case, you'll find no shortage of Gwent players in Oxenfurt. 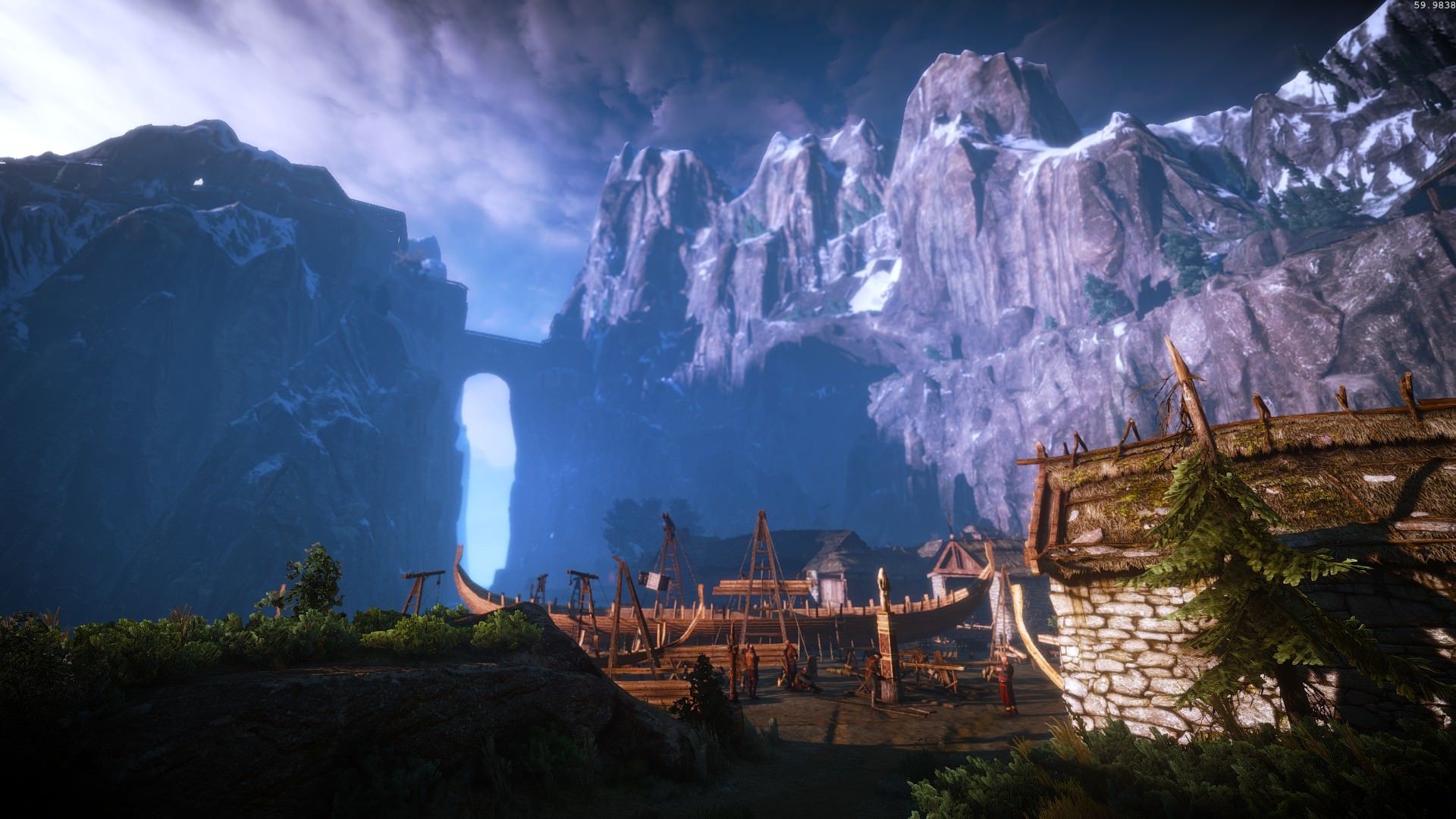 The Skellige Isles were often seen as resilient Viking kingdoms in The Witcher 3 that have withstood invasions of kingdoms more advanced than they were. Kaer Trolde, their capital, is both a show of force and a home to the hardy people of Ard Skellige.

It's a castle built near a mountain peak – what could be grander than that? The ambient music in the castle also perfectly matches Kaer Trolde's old and sturdy walls built by generations of Vikings. Why couldn't Geralt have settled there instead?

There it is, the jewel of the Northern Realms, Novigrad. It's the largest city in-game and puts others to shame. You can feel the mud, the poverty, and the fear of the citizens due to the witch hunts and the war, all while the wealthy sit comfortably playing Gwent near the top of the city.

Novigrad is a medieval dark fantasy city done right. Novigrad is actually a neutral city with 30,000 inhabitants (looking at the civilian density in-game, it's not hard to believe that number). It's such an important city in the video game industry and in The Witcher 3 that entering Novigrad for the first time is bound to be unforgettable.

Despite Novigrad's two-sided nature and dense population, it just manages to miss being crowned the best city in The Witcher 3. No, that title goes to Beauclair in Toussaint, accessible only in the Blood and Wine expansion for the game. It's the video game equivalent of Disneyland, where everything is beautiful on the surface.

After a short walk along the streets of Beauclair as Geralt, you can almost feel the warm sunlight, smell the grapes, and hear the medieval fanfare as if you're touring a high-fantasy version of feudal France. For a moment, Beauclair can make you forget that you're actually a Witcher and instead make you feel like a wine-tasting fantasy knight. Until the monsters come out, that is.