The Game Awards, the annual celebration of the year’s best games and premieres, hit a record of more than 70 million livestream views on December 10, up 55% from 45.2 million a year earlier.

That’s a pretty phenomenal growth rate for gaming’s biggest celebration, which wags like me frequently compare to the Oscars. It was a big result for a show that has helped define the culture of gaming in the mass market in recent years.

“I didn’t really expect that we would keep growing, but it was really good engagement across the board,” Keighley said. “It was really nice to see. In India, we added new venues on Disney+ and other places. China and Korea did really well. ”

Geoff Keighley, producer of the show, said in an interview with GamesBeat that he was proud of the show’s reach around the globe and the participation of celebrity guests including Keanu Reeves, Brie Larson, Tom Holland, Gal Gadot, Christopher Nolan, and John David Washington. The show had more than 8 million peak global concurrent viewers, and it doubled or tripled its numbers across all major video, social, and engagement metrics.

My favorite part of the show was the solo performance by Pearl Jam’s Eddie Vedder, who sang a moving song that played a role in a key scene of The Last of Us Part II, the hit game from Sony and Naughty Dog that walked away with seven awards that evening, including Game of the Year. Keighley was also happy to see small games such as Among Us, made by indie developers, walk out with awards such as best multiplayer game.

Keighley said he liked the debate around the creative choices in Naughty Dog’s big game, which was the favorite but has been panned by some vociferous fans. 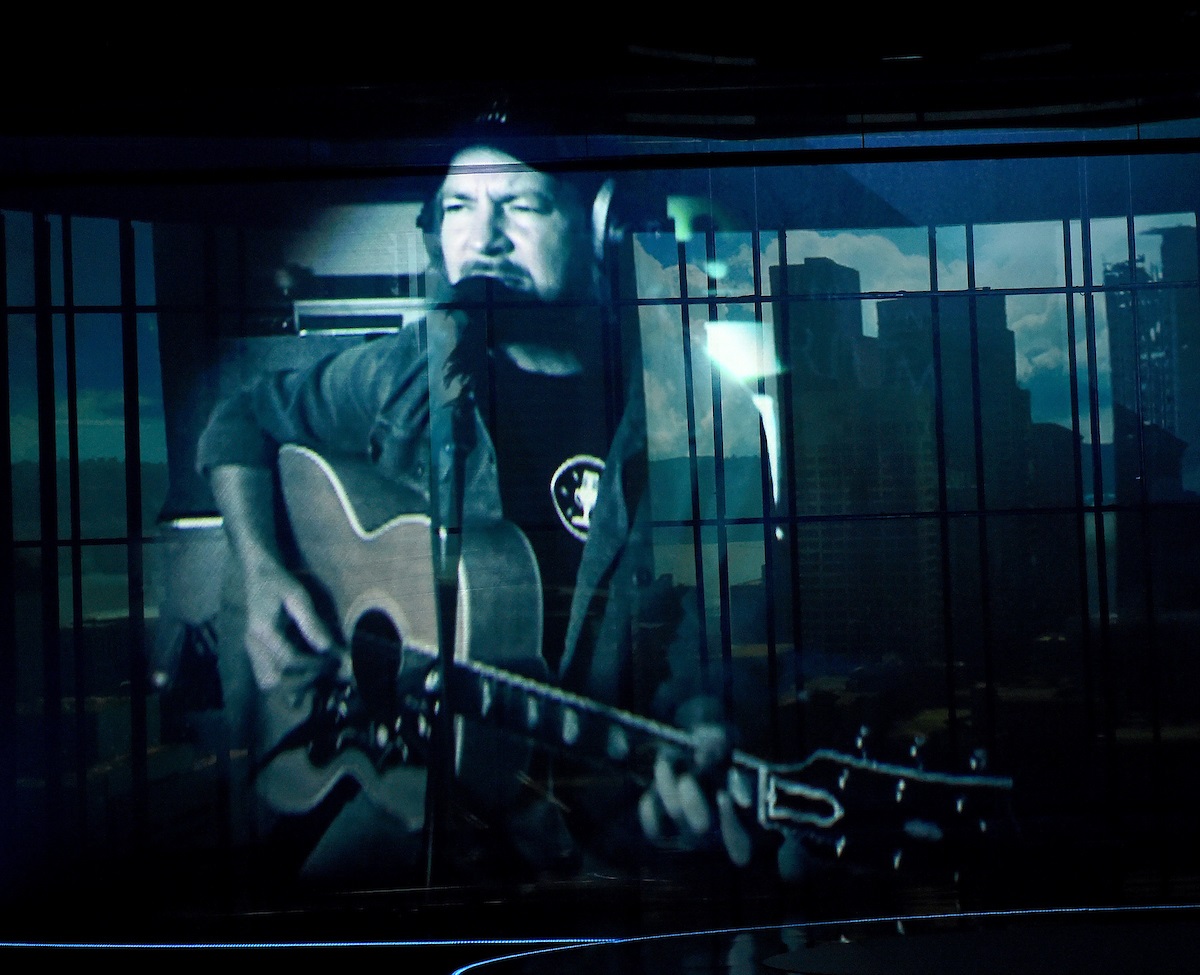 Above: Eddie Vedder performs remotely from Seattle on The Game Awards 2020.

“I knew it was going to be a controversial vote, but you are looking at a global audiences of tens of millions that have played that game, with lots of good reviews,” he said. “People are often frustrated about what wins awards. But I like the debate and discussion that takes place around the games. You don’t always want one game to be the slam-dunk winner.”

Keighley said the overall figures included the numbers from a couple of hundred thousand streamers on Twitch who staged watch parties on the livestreaming service. The Game Awards itself doesn’t monetize those streams, but Keighley said he has had an open approach to get the show to the widest audience possible. 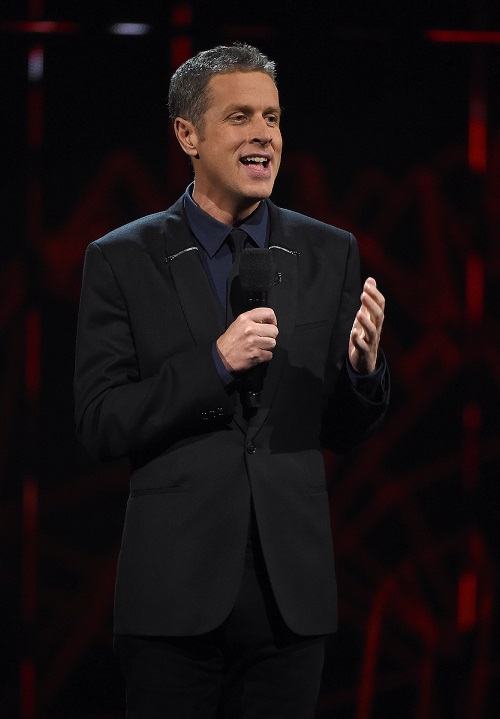 Above: Geoff Keighley hosts The Game Awards 2020 in Hollywood, California.

These numbers compare favorably to the Academy Awards, which Nielsen measured as drawing 23 million viewers in the U.S. this year. Overall numbers for the Oscars could still be bigger, but the Oscars have been on a decline, down from 32 million in 2017.

In China, the show aired on more than 10 digital networks, with significant viewership growth on platforms such as Huya, Bilibili, and Douyin. In India, The Game Awards was streamed on Disney+/Hotstar, and other leading over-the-top services including JioTV, MX Player, Voot, and AirTel. India viewership data is not included in these numbers and will be added when available.

On Twitter, The Game Awards also dominated with a 31% increase in conversation volume year over year, and unique authors up 65%, making this the most talked-about Game Awards to date. The show trended No. 1 worldwide, with 12 of the 29 worldwide trends being about the show. In addition, thanks to the launch of a custom Branded Like, usage of #TheGameAwards on the platform increased 107% from a year ago.

All told, there were more than 30 world premieres of upcoming projects, in addition to breaking news on some of the most played games of the year including Among Us, Call of Duty Warzone, Fortnite, and Medal of Honor: Above and Beyond.

Keighley said he was proud to highlight diversity with the first-ever Future Class of 50 movers and shakers in the game industry and to carry on the tradition of honoring games that have a social impact and leaders, dubbed Global Gaming Citizens, who are recognized for their contributions to gaming.

“I think it’s an obligation of the show to tell non-traditional stories,” he said.

The Game Awards is executive produced by Keighley and Kimmie Kim. LeRoy Bennett is the creative director, and Rich Preuss is director.

Since presenters didn’t have to travel, it was easier for them to present at the show. But it was very expensive to do the show with the live acceptances this year, but I think it was worth it to see the emotion behind the winners.

“You get moments like Sean Murray (the leader on No Man’s Sky) doing a spit take because he was surprised that he won,” Keighley said. “That’s part of the magic of our show is that it’s really real and live and not manufactured.”

Postmortem on the show 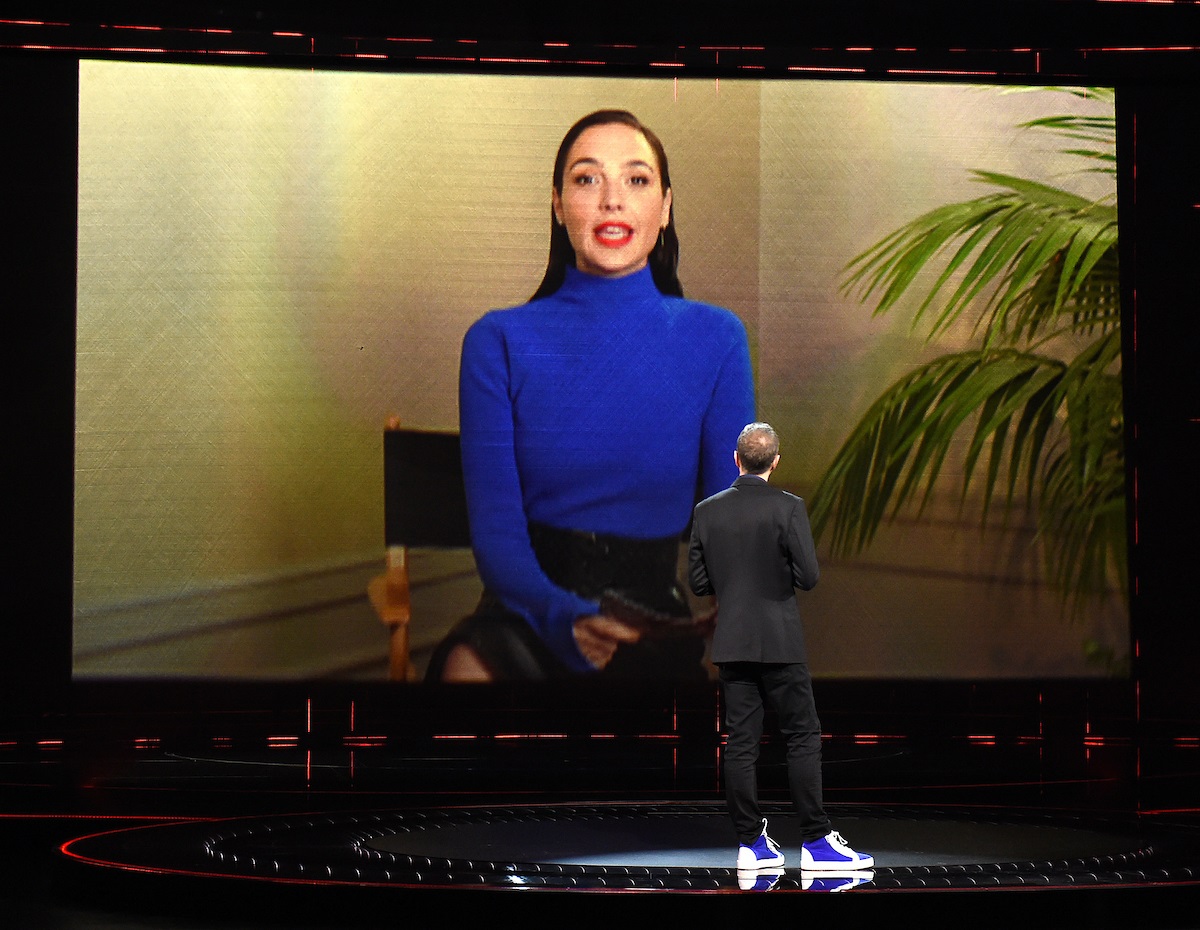 Above: Gal Gadot presents the Games for Impact award on The Game Awards 2020.

Keighley said he was glad the show ran smooth and all of the tech worked.

“As a producer, I love that those guys can be on the same stage as Call of Duty or Fortnite,” Keighley said. “What makes our industry strong is that the most popular games can be in the show. But also, a lot of the smaller games have a chance to be up for awards and be part of the show. I always push for that.”

If there’s anything the show could do better, Keighley said the focus on mobile games could be bigger, as mobile is now more than half of the revenue for the whole game industry.

“Garena’s Free Fire is huge globally, but it’s not the kind of game that our audience really pays attention to,” he said. “There’s a big audience out there, with all of the Supercell games and others, and I’m always thinking about how we include that in a meaningful way in the show. There’s a healthy tension, a debate that I have like people like Phil Spencer with.”

The show didn’t have any real controversies this year, compared to past years. When Keighley’s friend Hideo Kojima won an award last year for Death Stranding, gamers accused Keighley on social media of voting for his friend. Keighley pointed out that his vote doesn’t count.

Media critics such as GamesBeat vote in the awards, while fans also vote in a people’s choice category. The fan vote is also factored into the overall scores from the critics. On TheGameAwards.com, fan voting more than doubled — with a total of 18.3 million authenticated votes across the website and on Bilibili in China. In total, fan voting was up more than 20% from last year.

Keighley was impressed with The Last of Us Part II, but he also liked Half-Life: Alyx, which didn’t get nominated for Game of the Year. 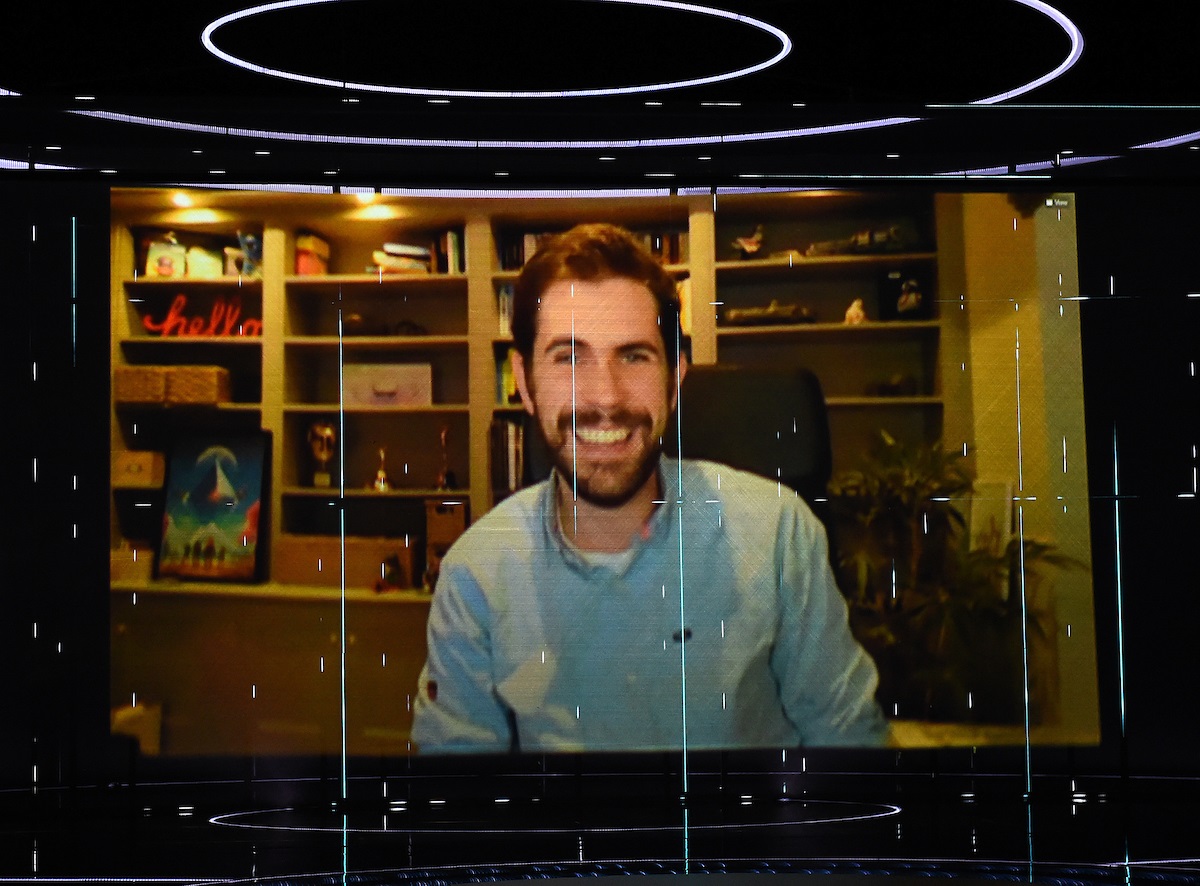 Above: Sean Murray accepts the award for Best Ongoing Game for No Man’s Sky on The Game Awards 2020.

Josef Fares, who famously said “F*** the Oscars” during The Game Awards in 2017, came back this year to show a new game, It Takes Two. I asked Keighley if he worried that Fares would repeat his famous remark, but he shook it off.

“This really is one of the biggest entertainment industries in the world, and it should be appreciated that way,” Keighley said. “You and I have been doing this for decades, and I don’t think gaming has ever been properly appreciated. There will come a day when The Game Awards is the biggest award show for entertainment. That’s been my long term goal. And I think we’ll get there. We’re on a good trajectory with our growth rate, while the Oscars have seen a decline.”

Keighley was a little annoyed with CD Projekt Red, which launched Cyberpunk 2077 on December 10, the same day as The Game Awards. The last delay in the launch of the game meant that it wasn’t eligible in the voting. Keighley noted that the show had to pivot away from doing an orchestral version of Cyberpunk’s music and it forced some script changes. 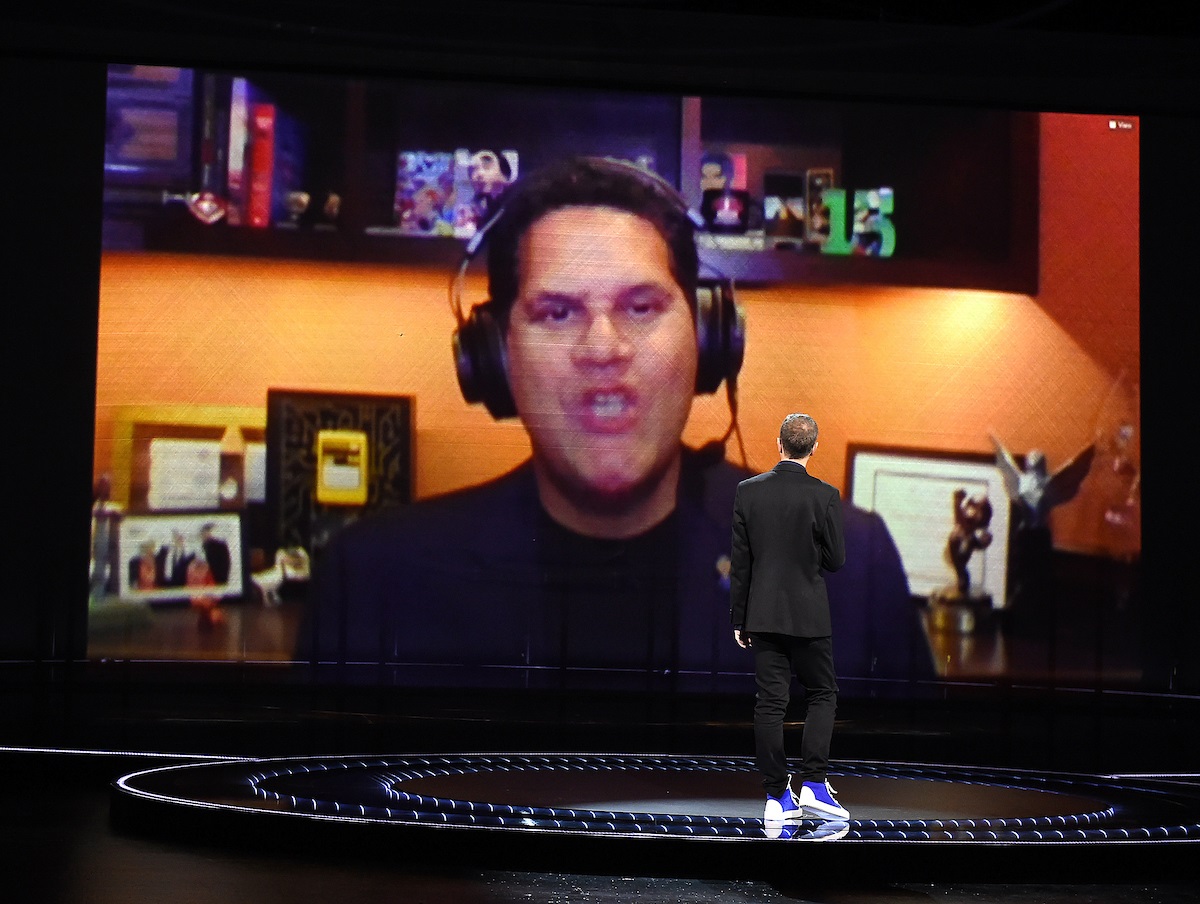 Above: Reggie Fils-Aime presents the Innovation in Accessibility award on The Game Awards 2020.

Keighley wondered what movie company would release a movie on the same day as the Oscars. But he needn’t have worried, as early players were complaining about a lot of bugs in Cyberpunk 2077. And he noted that Cyberpunk will be eligible to be in next year’s awards show, and by then many of the bugs could be cleaned up.

Keighley said he enjoyed enlisting Nolan, who created the movies Inception and Tenet, to give the award for Game of the Year and talk about the importance of storytelling in games.

Fares appeared in a mocap outfit on the show this year.

“I love that people can be themselves on the show,” Keighley said. “Brie Larson, who is a huge gamer, was posting on social media about getting her outfit like she was going to the Oscars. Then there are people like Reggie (Fils-Aime, former head of Nintendo of America), who is just as much a celebrity.”