Goichi Suda — most commonly known as Suda51 — is notorious for creating games with dark humor, twisted stories, and a bit of punk-rock flair. He had the desire to design video games at a young age and made his first steps into the industry at Human Entertainment. After spending five years with the company, Suda51 would eventually create Grasshopper Manufacture in 1998, giving him the freedom to make anything he liked.

Many of Suda's games include common themes like revenge, violence, and heroes who live by their own rules. The plots might be a bit incoherent at times, but the action and characters always make up for it. If you're interested in experiencing Suda51's unique style, these games will take you on a journey you won't forget anytime soon.

Updated on October 30th, 2022 by Kyle Chamaillard. Suda51 has been developing games since 1993 and seems to show zero interest in stopping anytime soon. Now that No More Heroes 3 is available on nearly every platform, we thought it would be a great idea to revisit some of the auteur's greatest work as we eagerly wait for him to announce his next ambitious title. 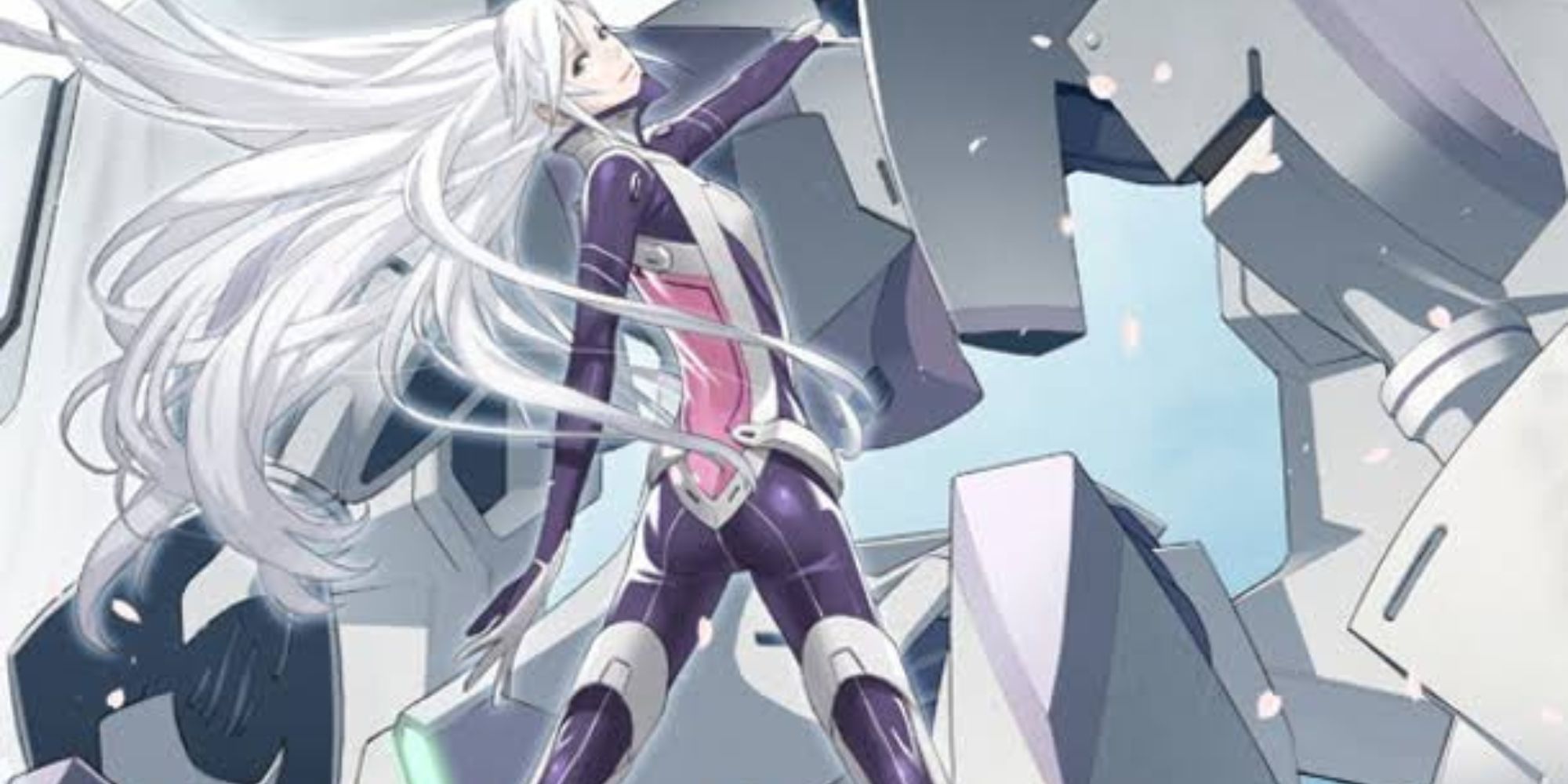 Suda51 has always liked experimenting with new technology, which is one of the reasons why No More Heroes was originally developed with the Wii's motion controls in mind. Once he saw the Nintendo 3DS, he immediately wanted to explore a new dimension of gaming and began development on Liberation Maiden.

This shoot 'em up features stunning animated cutscenes and a great soundtrack, but it only takes a couple of hours to complete the campaign. You play as Shoko Ozora, the recently appointed President of New Japan that uses her mecha suit to help her defend the country. It's short and sweet, and one of the least-expensive games in Suda's repertoire. 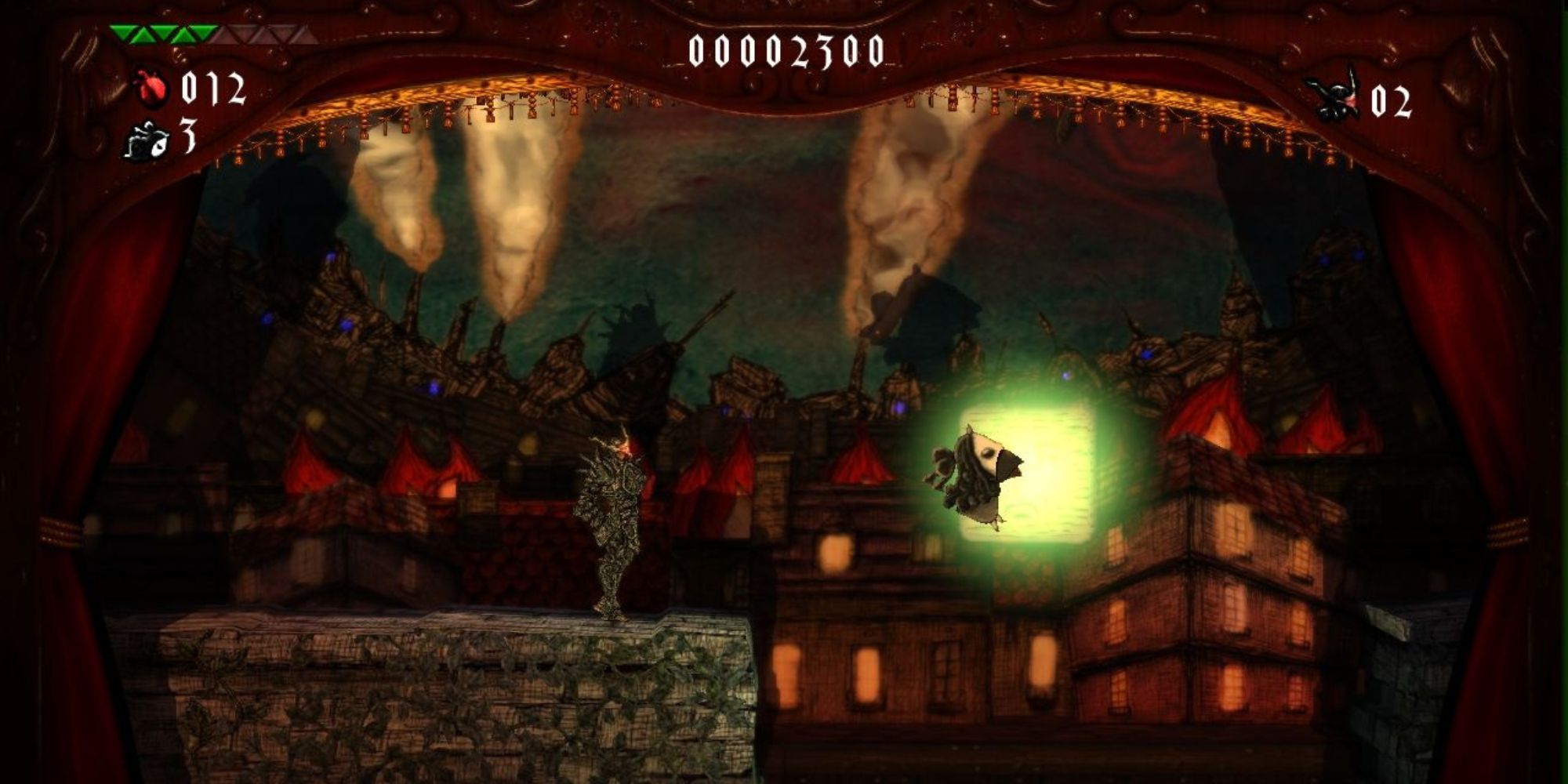 Black Knight Sword is a hidden gem that might not appeal to every Suda51 fan because its difficulty shows little mercy. Black Knight Sword is a 2D side-scrolling platform game with an aesthetic that makes it look like a stage play. It was available for the PS3 and the Xbox 360, and follows the titular hero as he attempts to take down the White Princess.

The Black Knight carves his way through hoards of monstrous creatures with a sword that's inhabited by a strange doll-like character called Black Hellebore. The art style fuses the Japanese Kamishibai style of storytelling and Suda's dark and somber tone to create a beautifully difficult adventure. 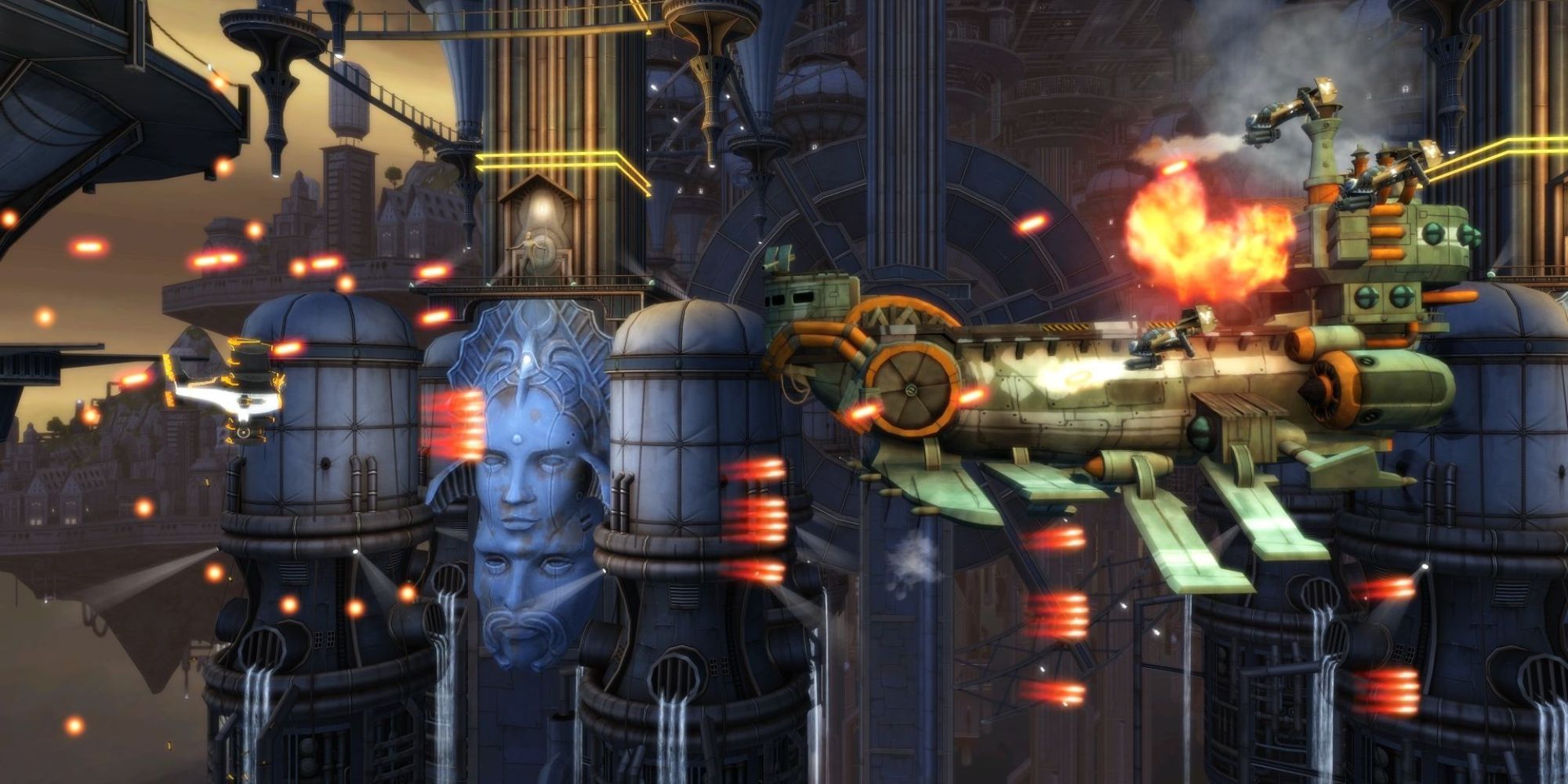 Sine Mora EX is a side-scrolling shoot 'em up that uses both 3D and 2D visuals to great effect. It's an ambitious title with two plots happening simultaneously. One story follows a father who is on a mission to avenge his son, and the other follows the lone survivor of a race that the Empire thought they had destroyed.

In both storylines, you'll navigate through stages and destroy anything that gets in your way. Sine Mora also has a unique mechanic that abandons health bars and instead uses the time limit to determine your fate. Taking hits from enemies makes the clock tick faster while taking them down adds more time back. It's another short but sweet adventure worth picking up if you're looking for a fun twist on a familiar formula. 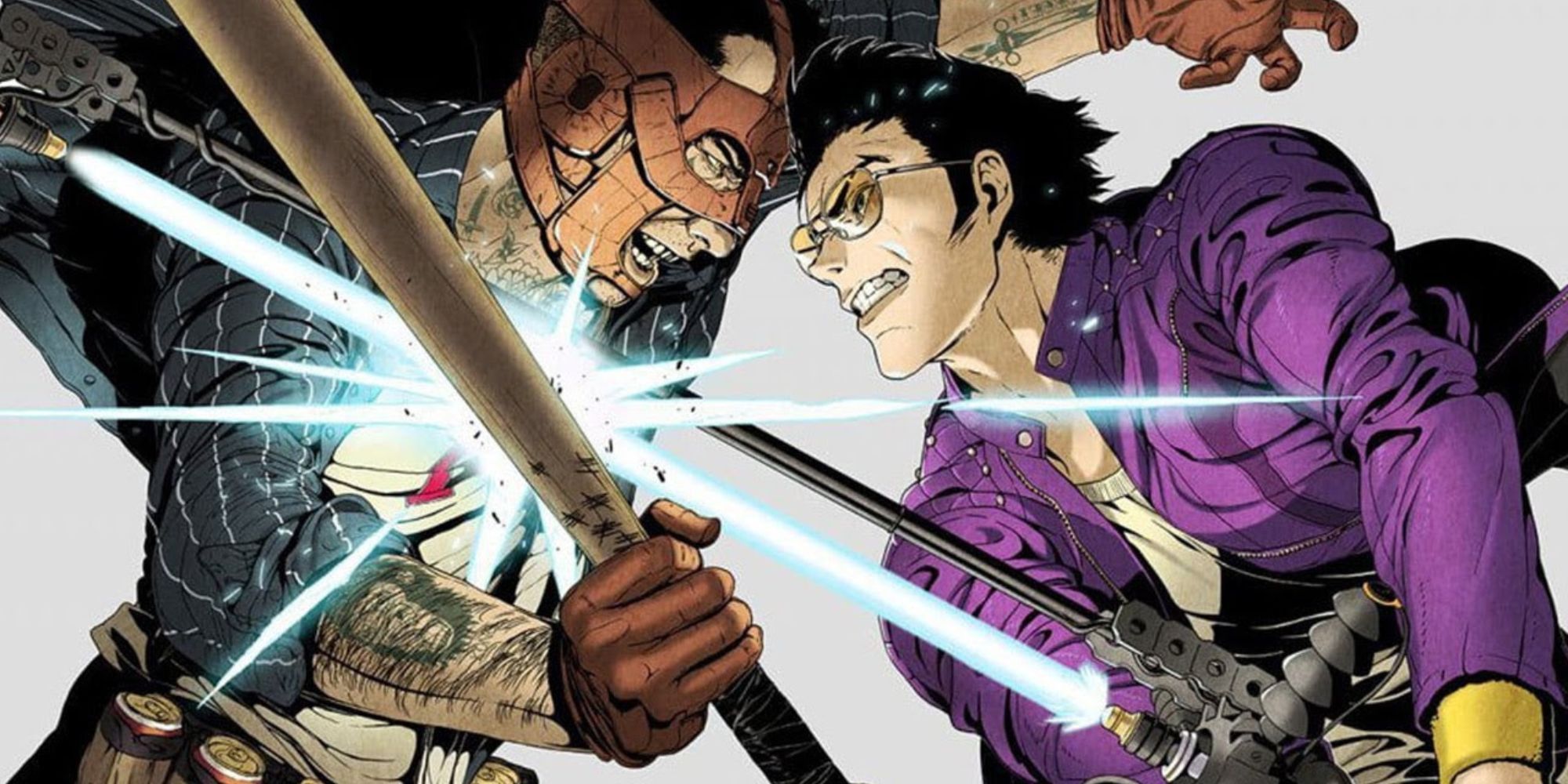 While it's not a direct sequel to No More Heroes 2, Travis Strikes Again takes place seven years after it and was the first game in the series after a brief hiatus. Travis Touchdown has isolated himself to protect those closest to him. His self-imposed vacation is cut short when he is attacked by Badman, who is seeking revenge against Travis for killing his daughter.

Travis Strikes Again was the first No More Heroes game to appear on the Switch and the first entry to feature a co-op mode. It plays quite differently than the others and is more of a top-down hack-and-slash than a sprawling action-adventure. It features several cameos from familiar Suda51 protagonists like Mondo Zappa from Killer is Dead and even characters from indie hits like Hotline Miami. 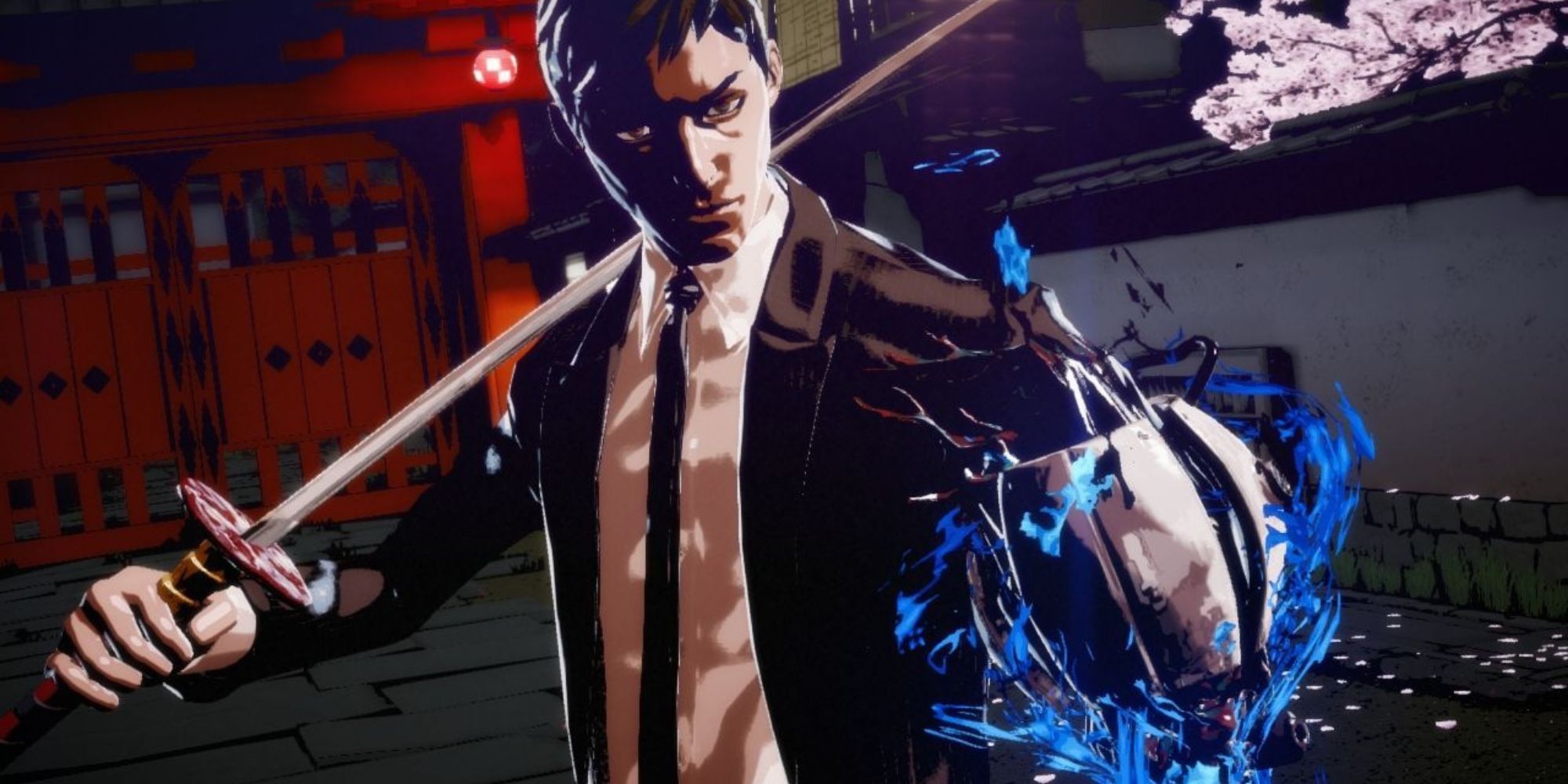 Killer is Dead takes place on a futuristic and incredibly stylish version of Earth. Dark Matter — malignant energy that originates from the dark side of the moon — has the ability to infect weak-willed humans and turn them into creatures called Wires. You take on the role of Mondo Zappa, a new Executioner who is tasked with eliminating Wires.

Mondo is armed with a sword and a cybernetic gun arm that can absorb the Dark Matter, which makes him stronger and gives him new abilities to use. Killer is Dead is full of adrenaline-pumping action and bizarre locations, but it also has an incredibly confusing story that doesn't have a satisfying conclusion. 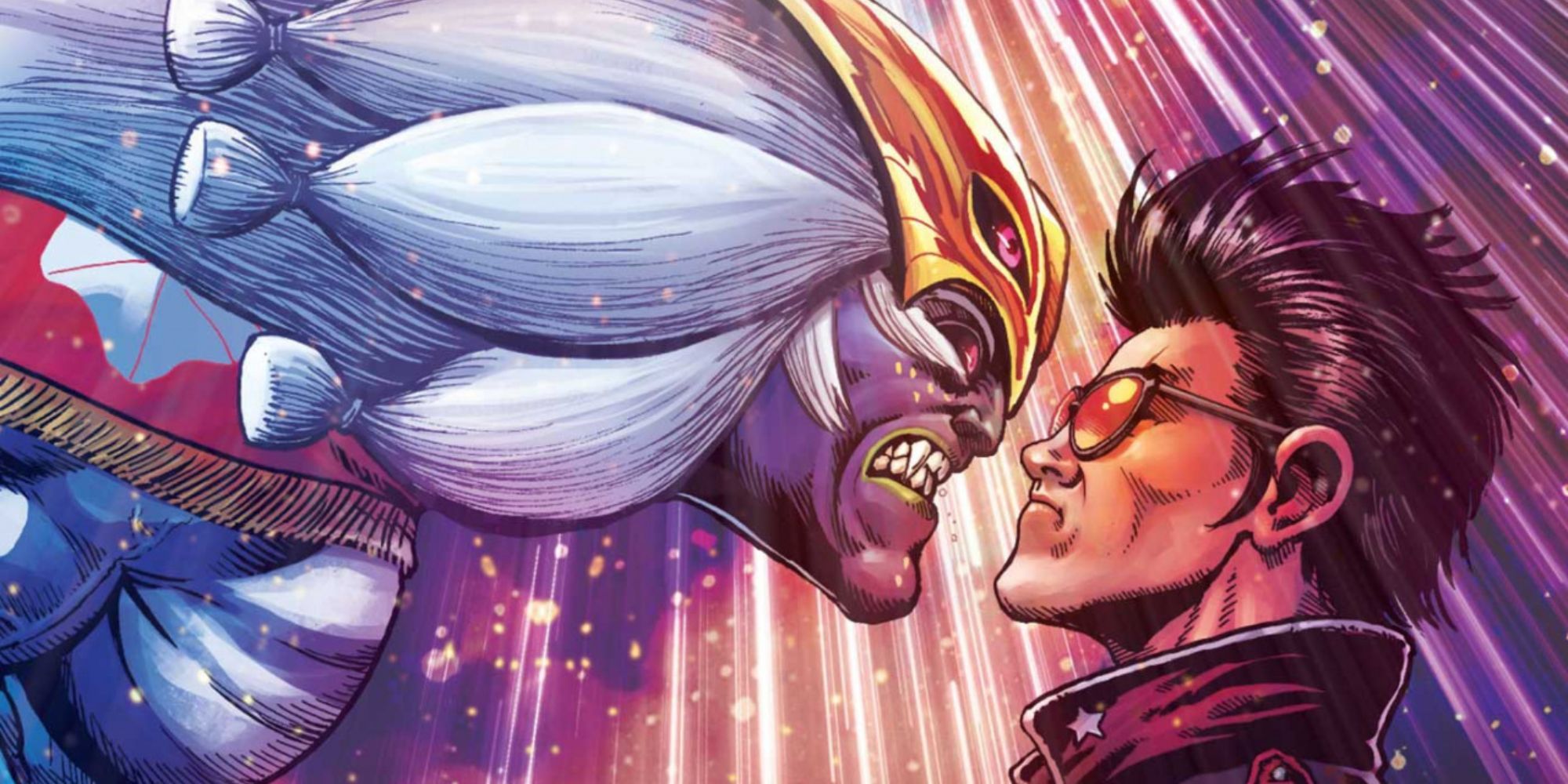 Over a decade after the release of No More Heroes 2, the series finally made its glorious return when No More Heroes 3 launched on the Switch in 2021. This ambitious sequel brought back everything long-time fans loved about the original games and delivered one of the most over-the-top and hilarious action adventures in recent memory.

After Earth is invaded by an alien prince named FU and his henchmen, Travis Touchdown returns from retirement to protect his friends and kick intergalactic butt. Suda51 throws so many ideas against the wall in No More Heroes 3 that it quickly becomes hard to keep track of the plot, but there is truly nothing else like it. If you don't mind a game that's more style than substance, No More Heroes 3 can't be beaten. 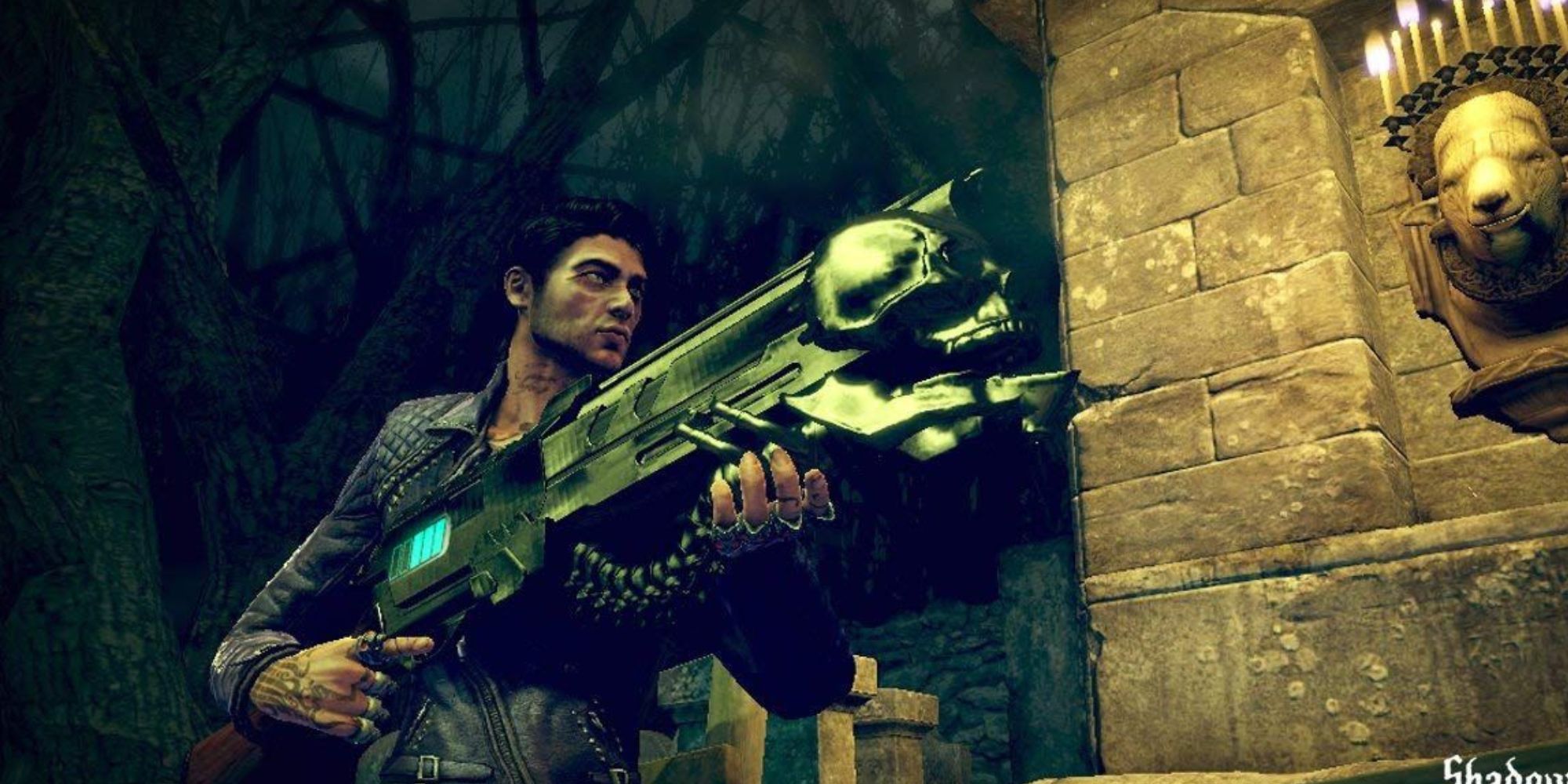 Shadows of the Damned is a collaboration between Suda51 and Shinji Makami, the creator of the Resident Evil series. You take on the role of Garcia Hotspur, a demon hunter who braves the dark and dangerous underworld to rescue his girlfriend from the Lord of Demons. It does a great job of weaving elements of action and horror together to create a fun and unforgettable journey.

Garcia is accompanied by his demon sidekick, Johnson, who can shape-shift into Garcia's motorcycle, torch, and primary weapon, a gun. This thriller is filled with Suda's infamously dark sense of humor and puzzles that fans of Shinji Makami will enjoy as well. It feels like the most mainstream game in Suda51's catalog in the best ways possible. 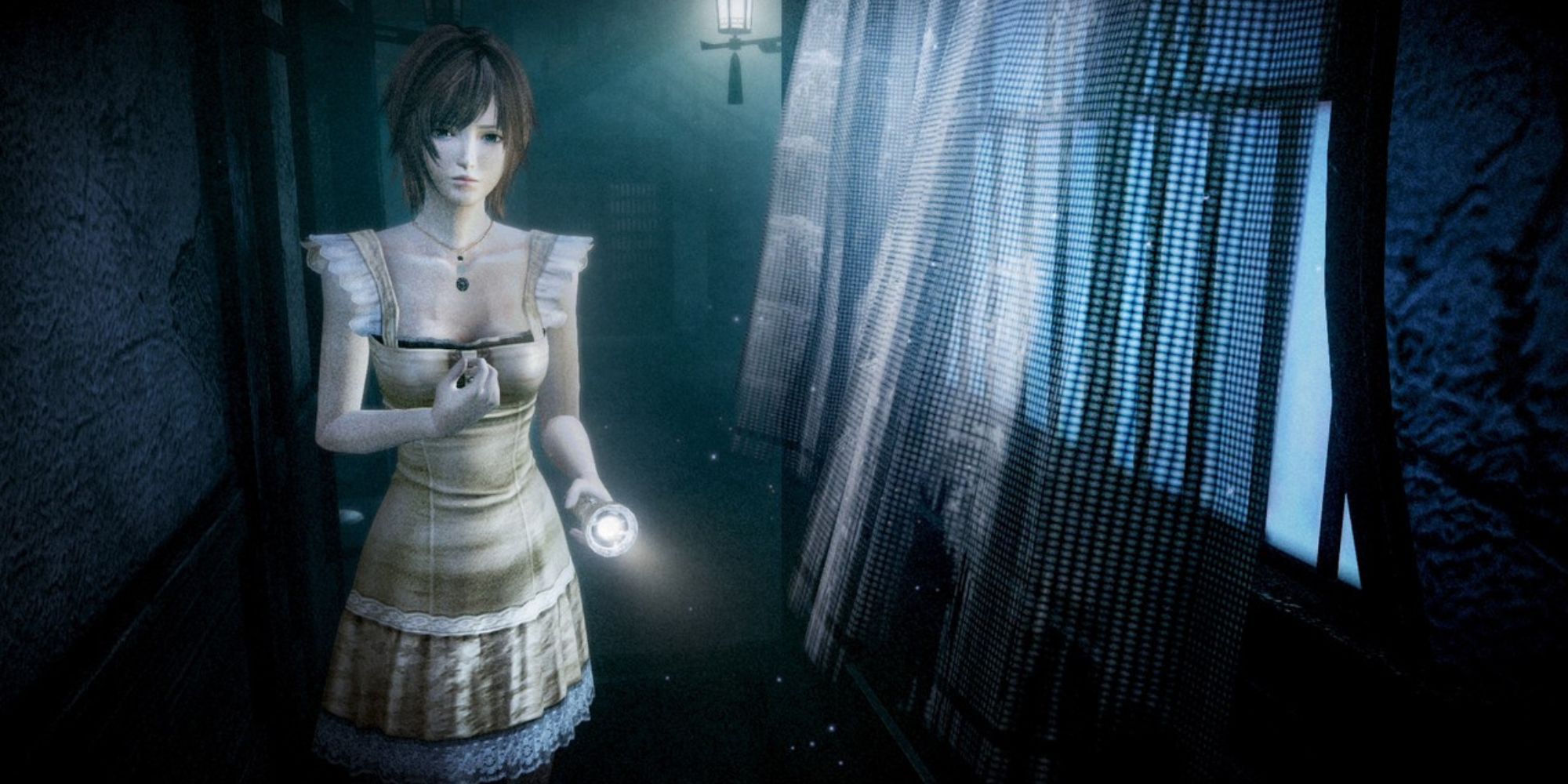 Fatal Frame is a popular survival-horror series that began on the PlayStation 2 in 2001 and used a unique camera mechanic that helped it stand out from Silent Hill and Resident Evil. The original trilogy of games was directed by Makoto Shibata, and Suda joined him as a co-director for this Wii exclusive despite his trepidation about the horror genre.

A lot of Fatal Frame's gameplay relies on you to point either a flashlight or camera to make progress, so the Wii felt like the perfect home for the fourth iteration of the series. You play as Ruka Minazuki as she returns to an island she was once a prisoner on to uncover its secrets. It may be one of Suda's most serious games and is perfect for anyone who isn't afraid of a few ghosts. 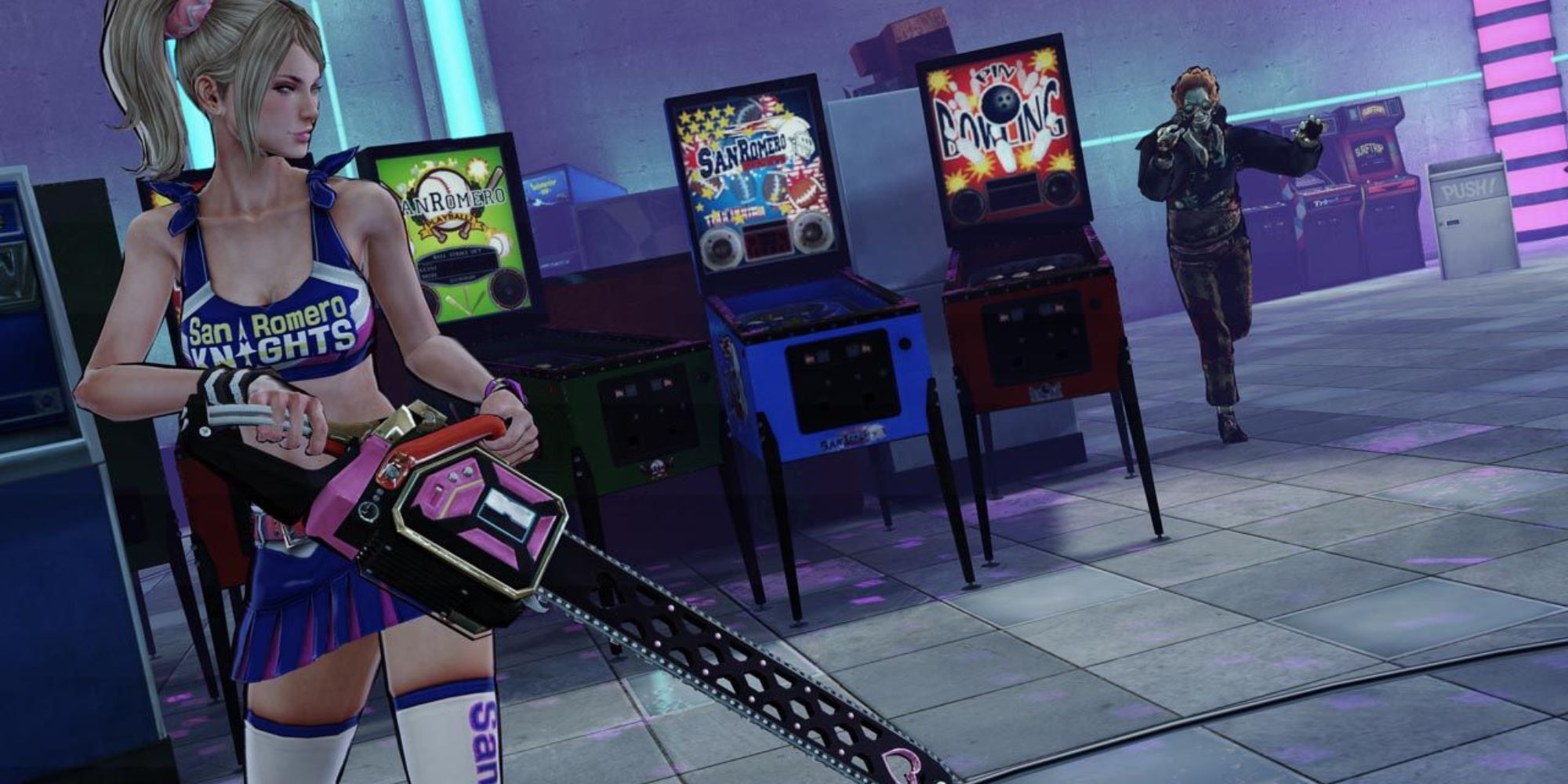 Lollipop Chainsaw is a hack-and-slash rollercoaster ride that follows Juliet Starling, a high school cheerleader armed with an adorable chainsaw and her cheer moves. On her birthday, Juliet's school is overrun by zombies and her boyfriend, Nick, ends up getting infected! She manages to save him, though he's not quite the person he used to be, as he's now a disembodied head hanging from her waist.

It didn't take long for Lollipop Chainsaw to become a cult classic thanks to its outstanding combat and hilarious plot. One of the factors that help it stand out from other Suda51 games is that it was created in collaboration with James Gunn, who is mostly known for writing 2004's Dawn of the Dead and The Suicide Squad. 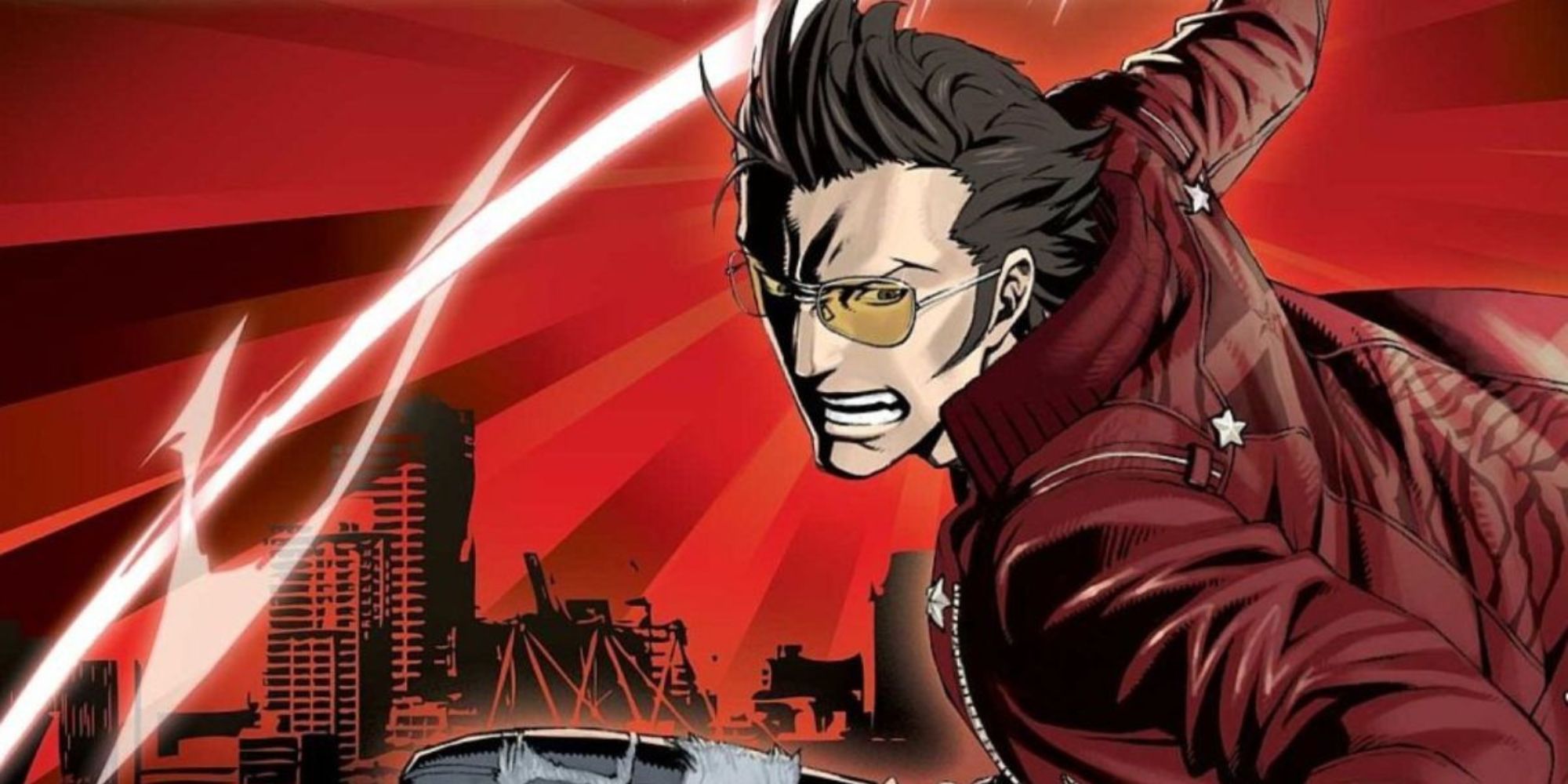 No More Heroes 2: Desperate Struggle takes place three years after the events of the original. It stars Travis Touchdown once again as he seeks revenge against a group of criminals that took the life of one of his closest friends. It's the only game in the No More Heroes series to have a different director, but Suda51 still oversaw and heavily influenced the project.

There are quite a few characters from the first game that return, including Shinobu, who actually becomes a playable character in one segment. It's got even more blood and action than before, and an even better soundtrack. You'll be humming "Philistine" to yourself for days after facing off against Margaret Moonlight. The last boss is incredibly difficult though, and is often viewed as the toughest in the series. 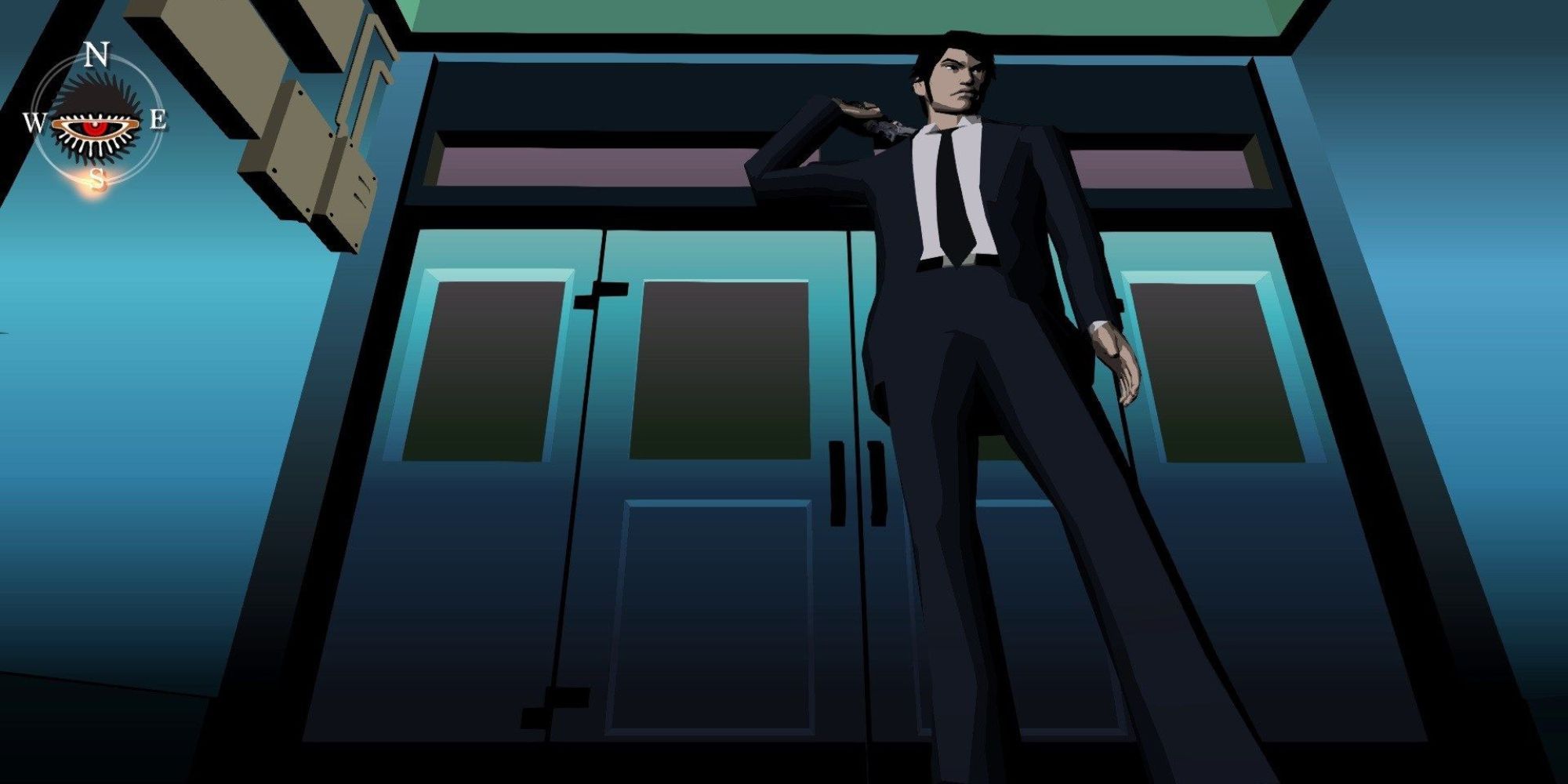 Killer7 is the first Suda51 game to be released in North America and it quickly became a fan-favorite on the GameCube and PlayStation 2. It follows a group of elite assassins who perform hits for the United States government. But this is no ordinary group: they are in fact the physical manifestations of one person's seven distinct personalities.

Each member of the Killer7 group has their own appearance, personality, weapon, and special ability that you can use whenever you like. Switching between personalities at will is a blast and showcased Suda's creativity and penchant for subverting expectations. The seven are tasked with taking down Kun Lan, the mastermind behind a deadly organization known as "Heaven's Smile". 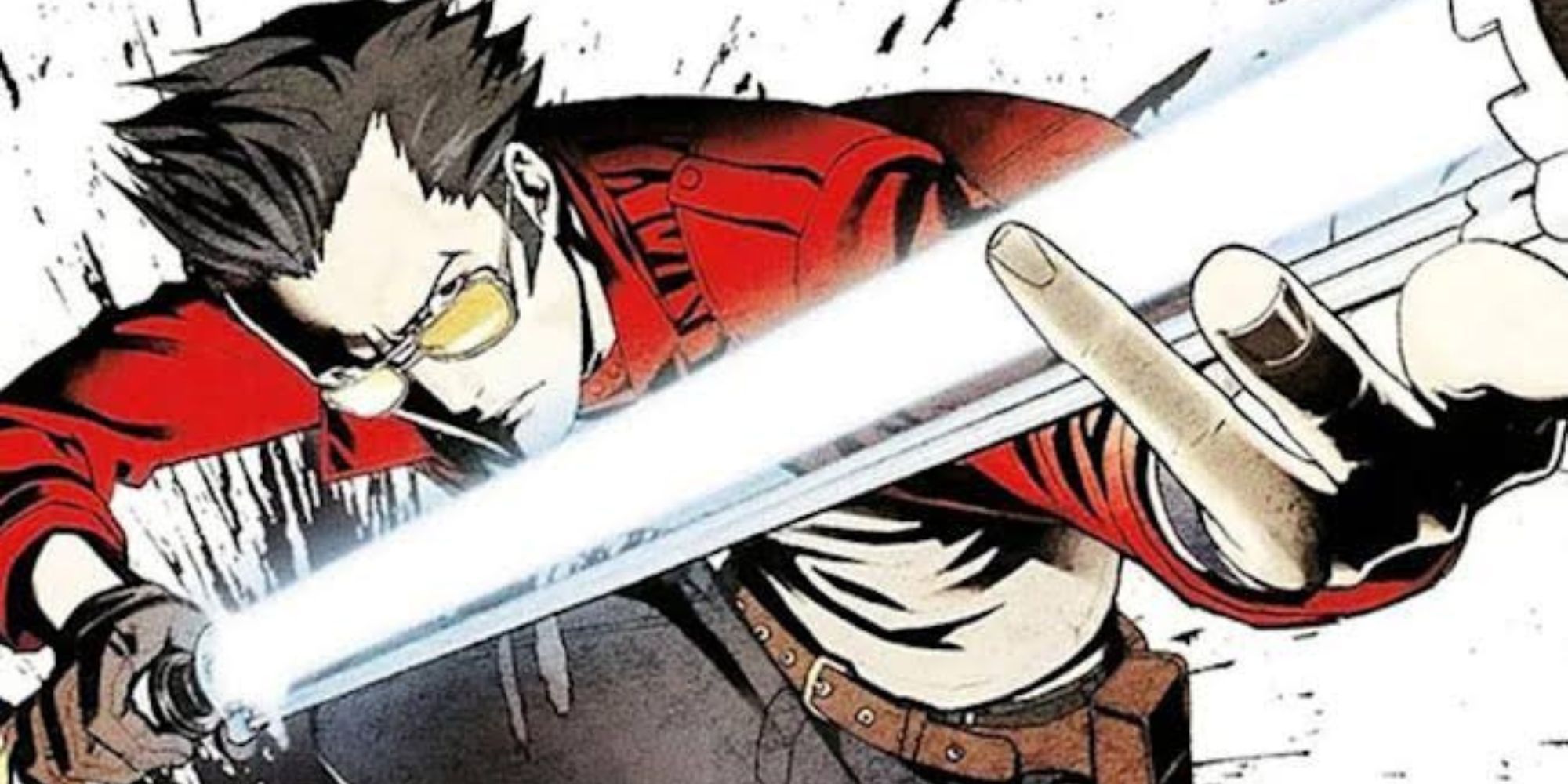 Despite Suda's years of writing and directing, No More Heroes is the game that helped make him a household name when it was released in North America in 2008. After blowing all his money on a beam katana, Travis Touchdown ends up taking an offer from a mysterious woman named Sylvia to become the top-ranked assassin in the United Assassins Association. All he has to do is take down the current top ten… easy, right?

No More Heroes has become notorious for its violence, roster of mustache-twirling villains, and hilarious implementation of motion controls. Its open world might not be fantastic, but slicing up waves of enemies with a beam katana feels amazing, and the story is full of enough twists to keep you on your toes until the credits roll. 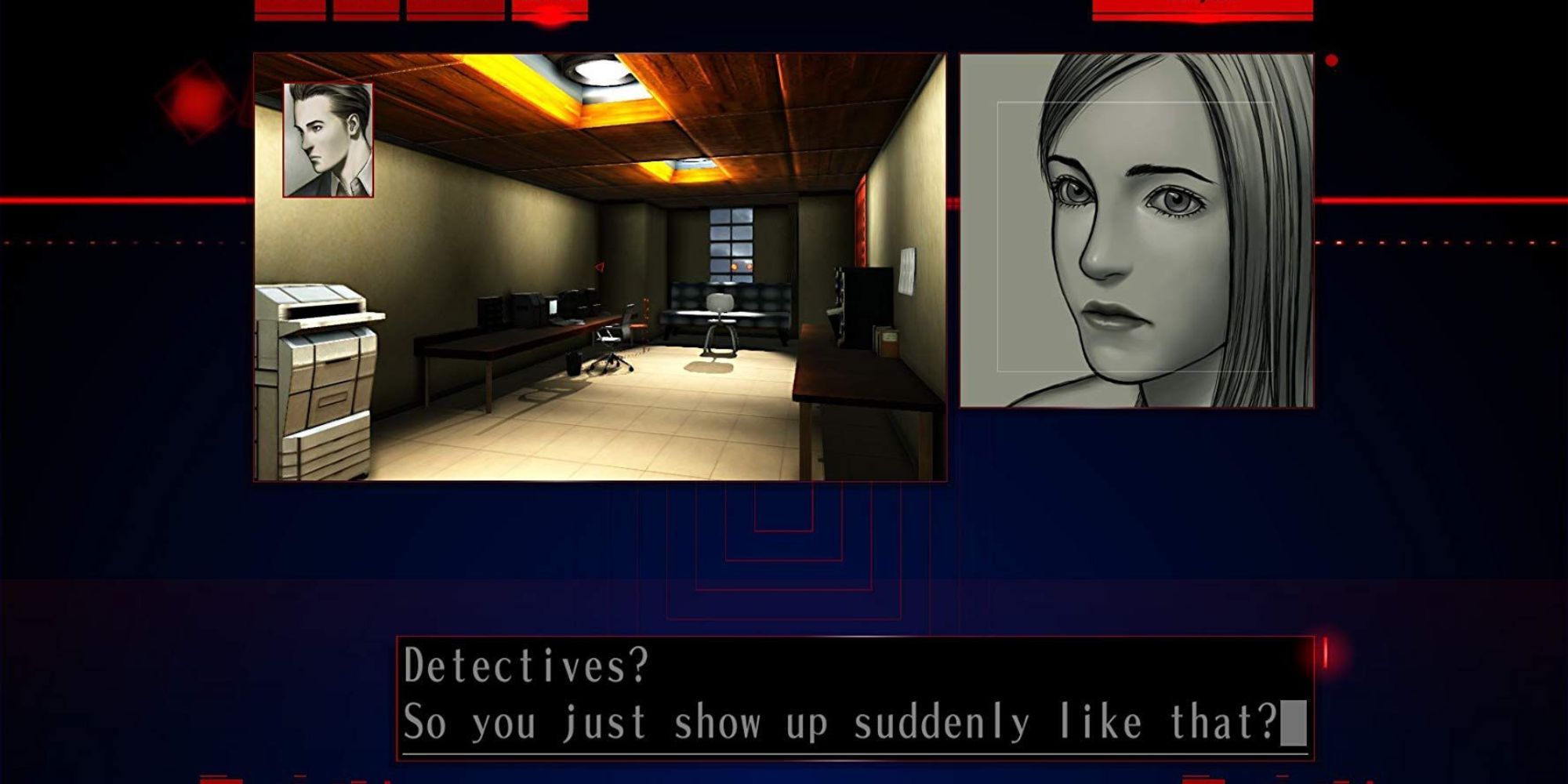 The Silver Case was Suda51's debut as an independent developer and the first title developed by Grasshopper Manufacturer. It's a visual novel and adventure game set in contemporary Japan in a city called the 24 Districts. When a series of strange murders are linked to a notorious serial killer who supposedly died years ago, it's up to two detectives with polarizing personalities to solve the case.

It's easy to spot the origins of Suda51's distinctive style and themes while playing through The Silver Case. The writing and characters almost feel like blueprints of what you should come to expect from the director's latest projects. It might not be his flashiest game, but Suda51 might not be where he is if it wasn't for its success.