JRPGs are full of high-stakes battles and searing personal rivalries. While most combat in the genre pits a party of heroes against the forces of evil, a duel between two characters can steal the show and provide a unique challenge for the player. These single-combat showdowns often leave a lasting impression on players, especially in the context of a greater story.

We've chosen five of our favorite one-on-one battles from across JRPG history. These are all defining moments in their games, often changing the course of both characters' lives… or ending one of them.

This article contains spoilers for every game listed. 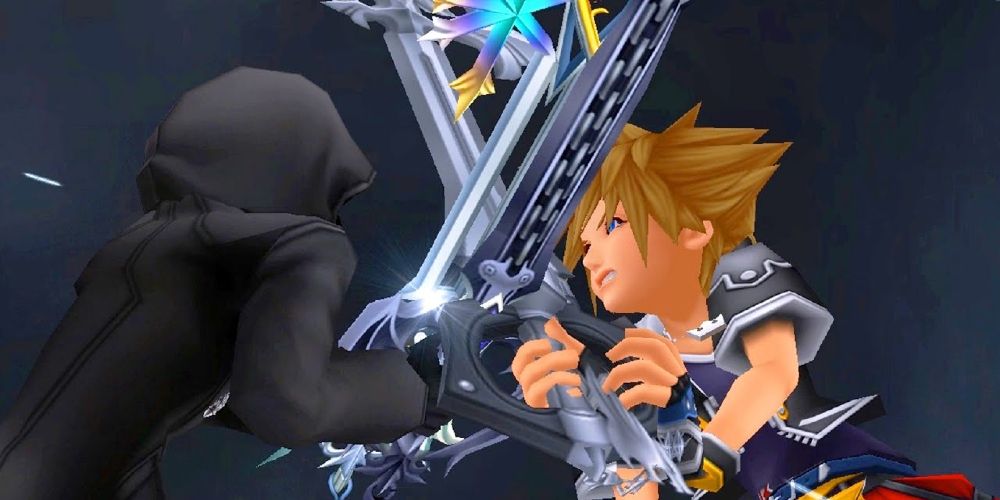 The events of Kingdom Hearts 2 are a direct result of Sora's brief transformation into a Heartless during the first game; Roxas, the Nobody created at that moment, lives his life in Twilight Town unaware of Sora's existence and the connection they share. When Roxas discovers that his entire reality is a simulation and that he is only partly real, he understandably goes through something of a crisis. At the end of the game's prologue, Roxas accepts the nature of his existence and merges with Sora, making the Keyblade Wielder whole again.

Throughout the game, Roxas' mentor Axel attempts to turn Sora back into a Heartless so Roxas can be reborn. After Axel is finally defeated, Sora and his companions visit The World That Never Was, a place filled with potential realities. Here, Roxas reappears as a separate entity and duels Sora for his right to exist. In the original version of Kingdom Hearts 2, the fight plays out as a cutscene but in the Final Mix, the player is given control of Sora for a proper boss fight.

4 Cecil vs. Himself – Final Fantasy 4 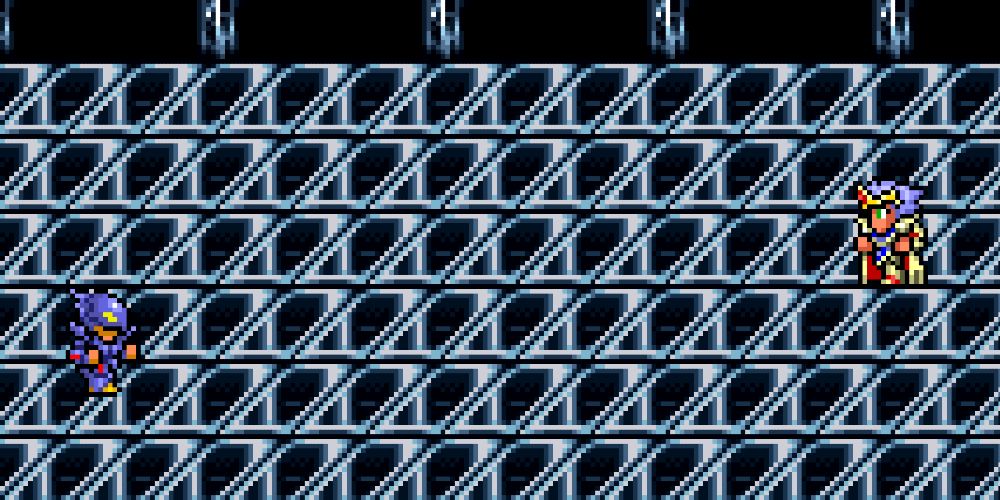 The first several hours of Final Fantasy 4 center on Cecil's search for redemption after committing atrocities in the name of his country. When he returns to Mysidia, the town of mages he raided at the beginning of the game, he is understandably met with an icy reception. Cecil is instructed to undergo a trial at Mount Ordeals to break his bond with the Dark Sword and dedicate himself to the Light as a Paladin.

Upon reaching the mountain's summit and accepting the trial, Cecil's power is stripped from him, rendering him all but helpless. He is then forced to battle an image of his former self, still empowered by the Dark Sword. The trick to this fight is that Cecil must not attack his foe; to earn redemption, he has to accept the suffering his former self caused, both to himself and to others. After suffering all that the doppelganger has to throw at him, Cecil emerges as a Paladin, ready to right the wrongs he's committed. 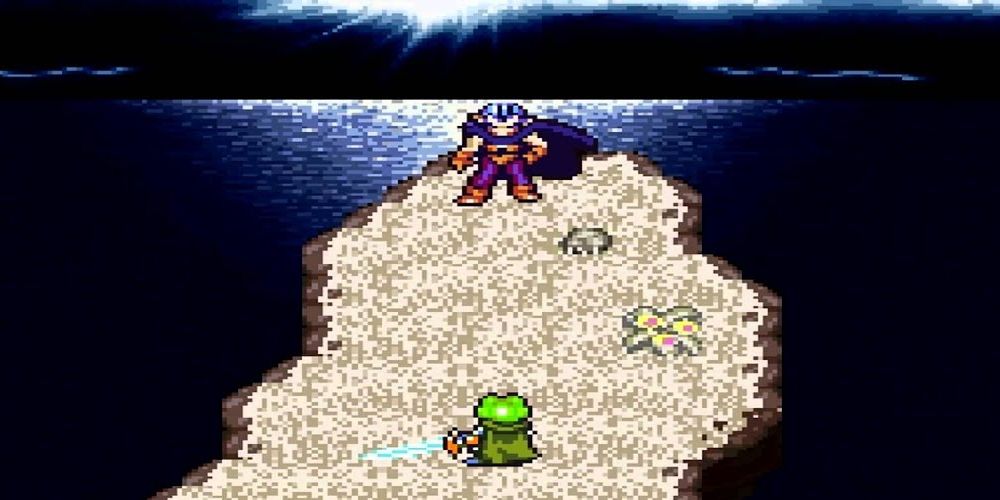 Throughout most of Chrono Trigger's storyline, Frog's goal is to avenge his mentor Cyrus by defeating the sorcerer Magus. After joining Crono on his quest to stop Lavos' emergence, Frog gets his chance when the party attacks Magus' tower. The climactic battle in Magus' summoning chamber ends with the accidental opening of a Time Gate, sending the combatants millennia into the past.

After several adventures in the ancient Kingdom of Zeal and the disastrous events at the Ocean Palace, the party finds Magus on a clifftop overlooking the ocean. After the sorcerer tells them of his origins and his reasons for attempting to summon Lavos, Magus asks the party if they still want to fight him. If they decline, Magus joins them and becomes a powerful asset to the team.

If the player opts instead to fight Magus, and if Frog is in the party at the time, Frog tells the other two team members to stand back. What follows is a duel to the death between the greatest swordsman and the greatest mage of their time, resulting in one of the tensest moments in a perfect game.

If Magus is slain (regardless of whether Frog duelled him or not), a special cutscene is added to the game's standard endings where Frog's transformation curse is broken and he becomes fully human again. 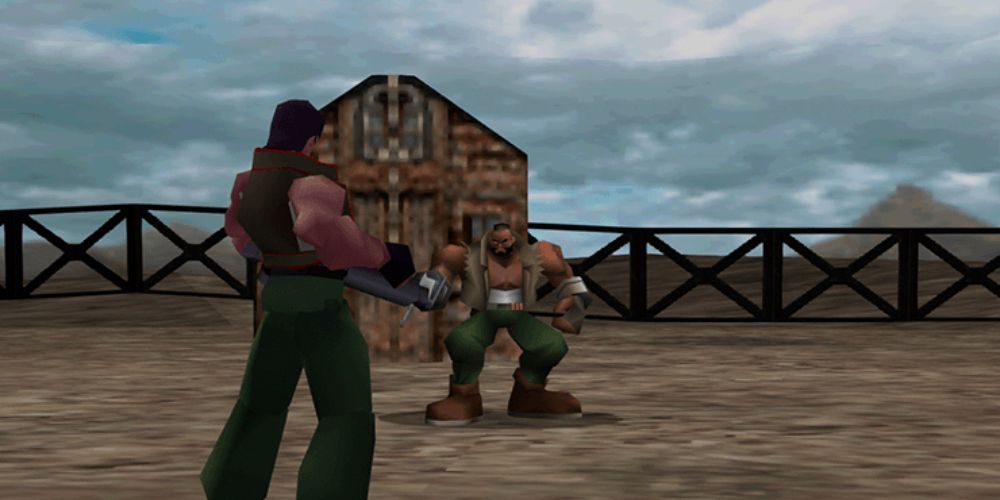 While Cloud's final duel against Sephiroth is the more well-known solo fight from Final Fantasy 7, Barret's reluctant gunfight against his former friend is heartbreaking and often overlooked. After a massacre at the Gold Saucer is committed by a man with a gun for an arm, Cloud and company fear that Barret has snapped. When they reunite with him in the deserts below the casino, Barret explains that there is another person who had the same surgery as him – Dyne, the biological father of Barret's adopted daughter Marlene.

When Shinra destroyed Barret and Dyne's hometown of Corel to remove opposition to a new Mako Reactor, both men were shot, necessitating the amputation of their hands – Barret's right and Dyne's left. Assuming Dyne was dead, Barret rescued the infant Marlene and fled. When the two meet again under the Gold Saucer, Dyne has become bitter and nihilistic.

Barret attempts to recruit Dyne to his fight against Shinra, telling him that Marlene is alive and well, but Dyne takes the news in the worst possible way – he states his intention to kill Marlene and them himself to reunite his family in the afterlife. Aghast, Barret is forced to fight Dyne. After the battle, Dyne realizes with horror what he has become and leaps to his death, instructing Barret to take care of his daughter. 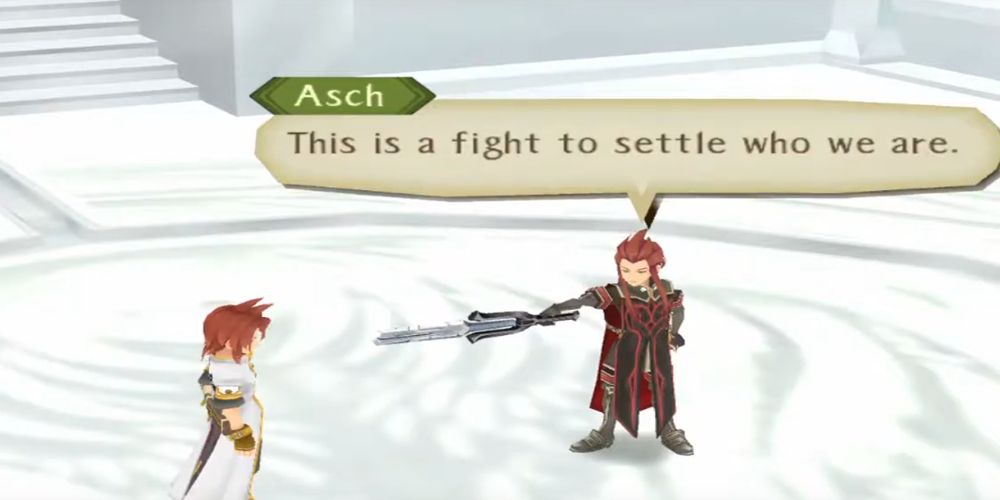 Asch the Bloody is a recurring antagonist in Tales of the Abyss. One of the God-Generals, he is a powerful foe but secretly opposes Van's master plan. Although Asch shares a common goal with Luke's party, he refuses to help them except when necessary. What comes off as pride and arrogance goes much deeper, however; Asch has a reason to despise Luke, and can't just let it go.

As it turns out, Luke is a replica created by Van to replace the original Prince Luke fon Fabre. The original heir, kidnapped at the age of ten, is none other than Asch himself. Seeing that Luke had lived his life in Asch's place understandably fostered a deep resentment in Asch, who dedicated himself to Van's service thinking he had nowhere else to go.

Asch wants to ultimately foil Van's plans, not wanting anyone else to have their life stolen as he had. Unfortunately, the God-General is unable to let go of his hatred for Luke and challenges his double to single combat in Eldrant, ostensibly to determine which of the two is powerful enough to defeat Van. The Tales series' combat is perfect for such a battle, and the result is one of the game's signature fights. After being defeated, Asch covers Luke's escape, ultimately giving his life to protect his nemesis.