Home » News » Terraria: How To Stop Corruption And Crimson Spreading In Hardmode

Terraria: How To Stop Corruption And Crimson Spreading In Hardmode

As soon as you enter Hardmode in Terraria, the world's Corruption, Crimson, and the new Hallow biome all start to expand outwards. Rapidly. If left to their own devices, these biomes will eventually swallow your entire world, destroying your NPC villages and making life generally difficult.

Thankfully, there are a variety of different ways you can remove Corruption and Crimson from your Hardmode world. This guide covers everything you can do to prepare for Hardmode's evil biome spreading, and what you can do in the endgame to remove it entirely.

Updated June 14th, 2022 by Jacqueline Zalace: Corruption and Crimson can be quite a pain to deal with. Because of this, we've updated this guide with more information on how to remove both of these evil biomes.

What Are Corruption And Crimson? 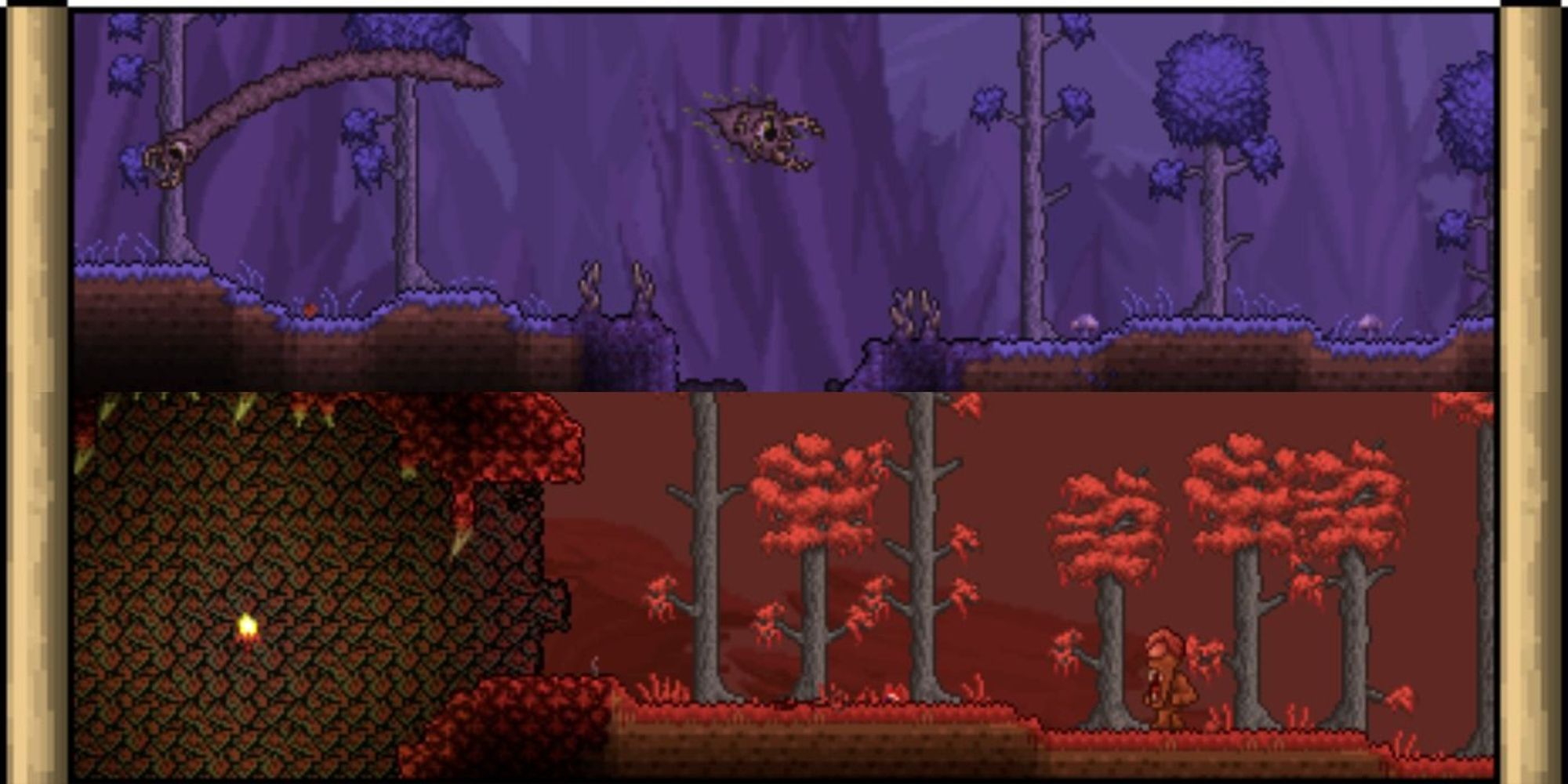 The biome will determine which bosses you face, like the Brain of Cthulhu for the Crimson and the Eater of Worlds for Corruption. This will also dictate what sort of armor and weapons you can create before you enter into Hardmode.

Overall, these two modes are the same difficulty, so it's up to you which one you want to face in your world.

How The Spread Of Corruption And Crimson Works 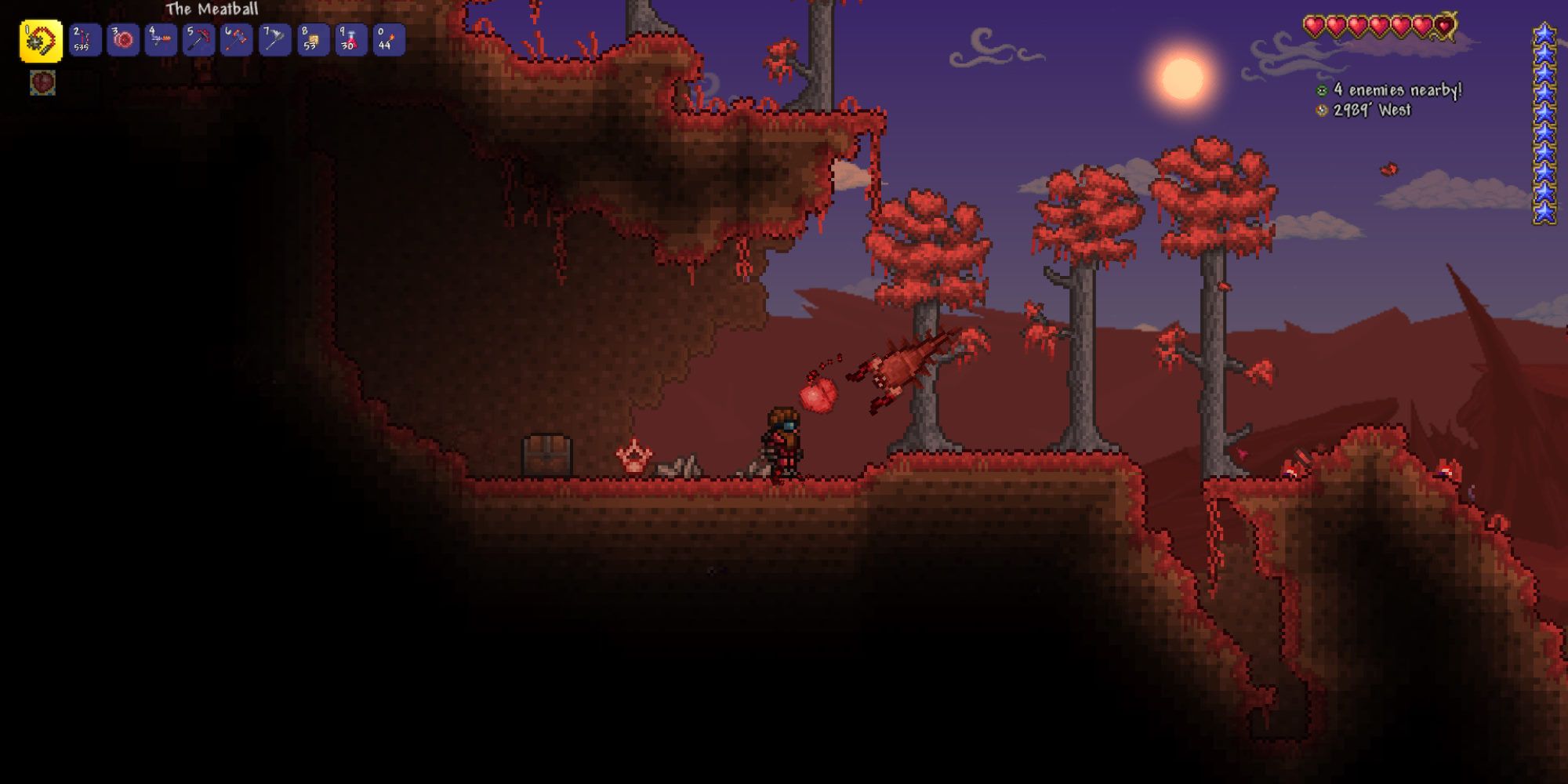 Both biomes will slowly spread, even before Hardmode. They convert nearby blocks to the same biome at a very slow rate. Corruption and Crimson can spread through sand, mud, grass, stone, pretty much every default natural block in Hardmode, but in pre-Hardmode, they only spread through grass and bushes. Converted areas will have the same background music, spawn the same enemies, and grow the same plants.

Specific biomes, like the Desert or Snow biome, will have unique versions of the biome when converted into either Corruption or Crimson. For example, the Crimson Desert will spawn enemies like the Blood Mummies on the surface, and Dark Lamias underground. The Snow Biome has no unique enemies, but the Ice will convert to Red Ice.

Below, you can check out some helpful information about evil biomes. 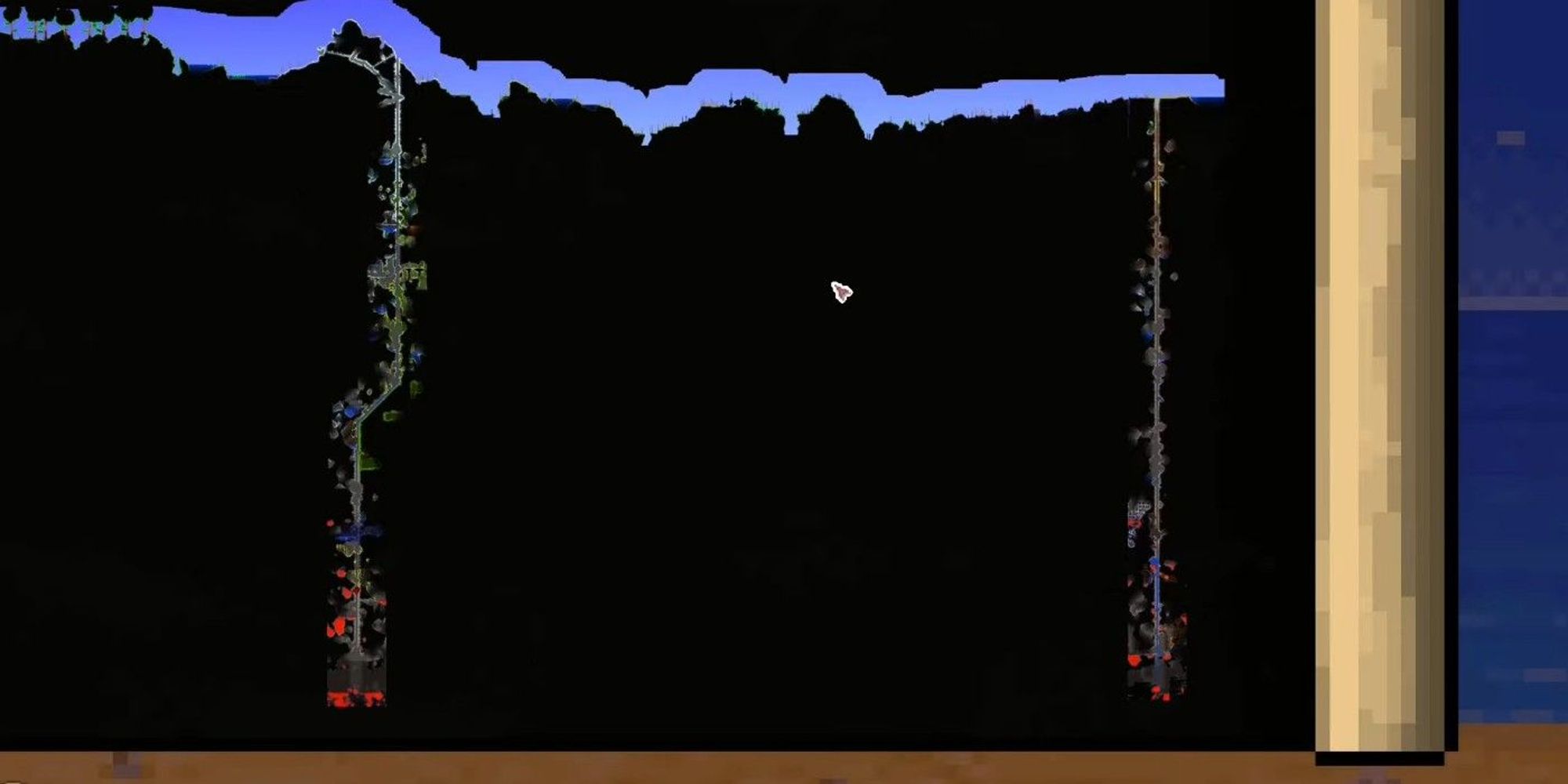 This method is completely time-consuming but is also probably the most effective way to prevent Crimson and Corruption from eventually ruining your world. It involves digging holes. Very big holes.

You need to dig a surrounding tunnel that is at least 3 blocks wide, although we recommend going for 6, just in case. Imagine you're drawing a circle around your Corruption or Crimson biome. This trench will prevent the affected blocks from spreading past it.

Remember, vines can grow in tunnels and will spread Corruption. These will grow from underneath the grass blocks. Even though it's even more time-consuming, you should encase the tunnels in a cheap block, like stone, to prevent vines from growing along the dirt walls. It's extremely frustrating if the vines ruin all the time and effort put into securing your tunnels. 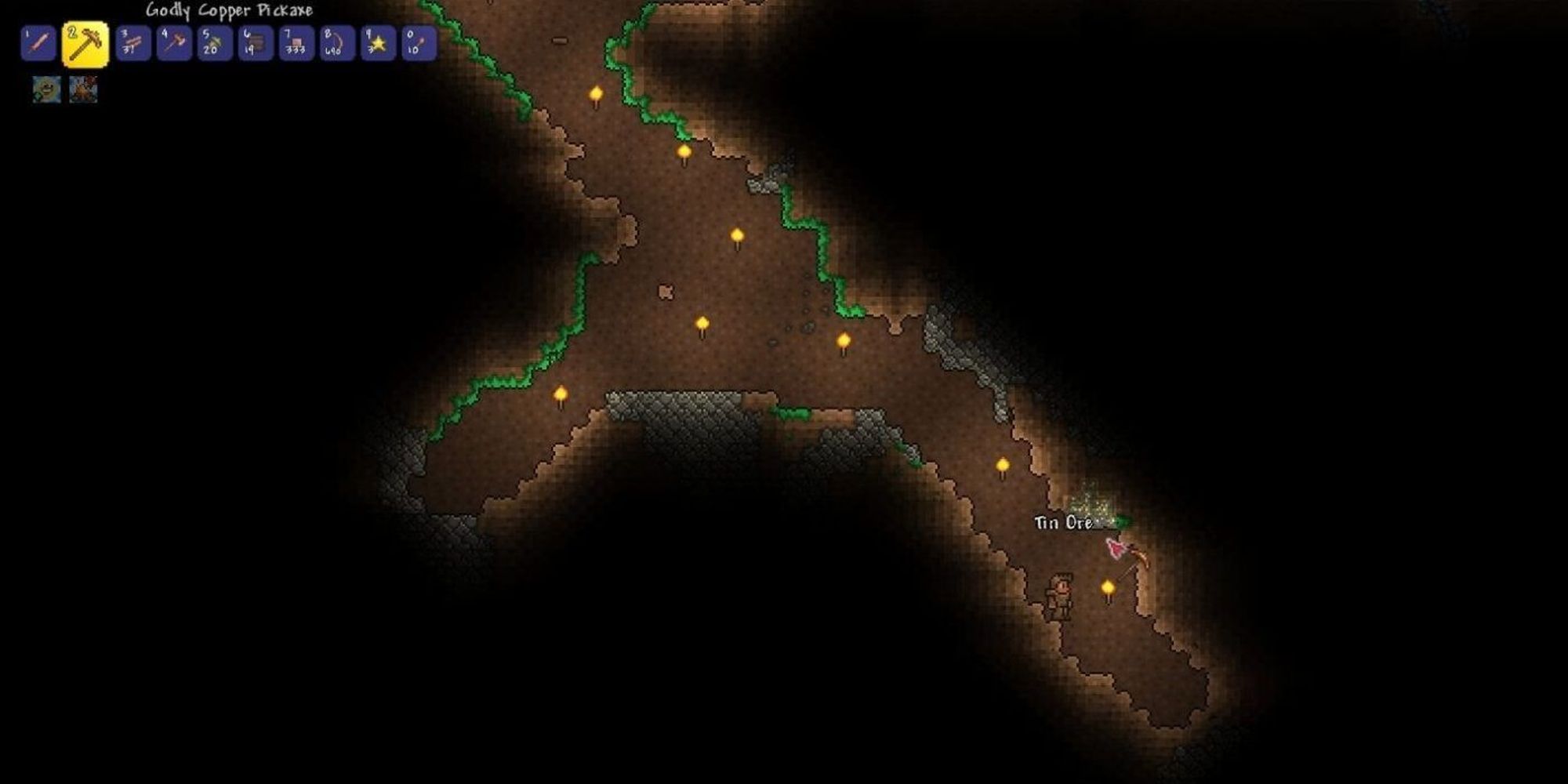 If your world is still in pre-Hardmode, you don't have access to some of the best mining equipment in the game. No super pickaxes, no drills, and no mega-buffs for mining. There are still some things you can use to make this process as smooth and as quick as possible. You can check out these mining methods below.

Deathbringer, Nightmare Pickaxe, or Molten PickaxeThese three pickaxes have fast mining speeds and can mine through tougher blocks.All three of these pickaxes can be crafted.

There is also the option that you carry out this job while Hardmode is already active. This means you'll have access to better mining items that can speed up the process. Watch out though! Make sure you're very quick with the tunnels, otherwise, you'll be chasing the Evil biome across your world as it spreads.

How To Remove Corruption And Crimson From Your World 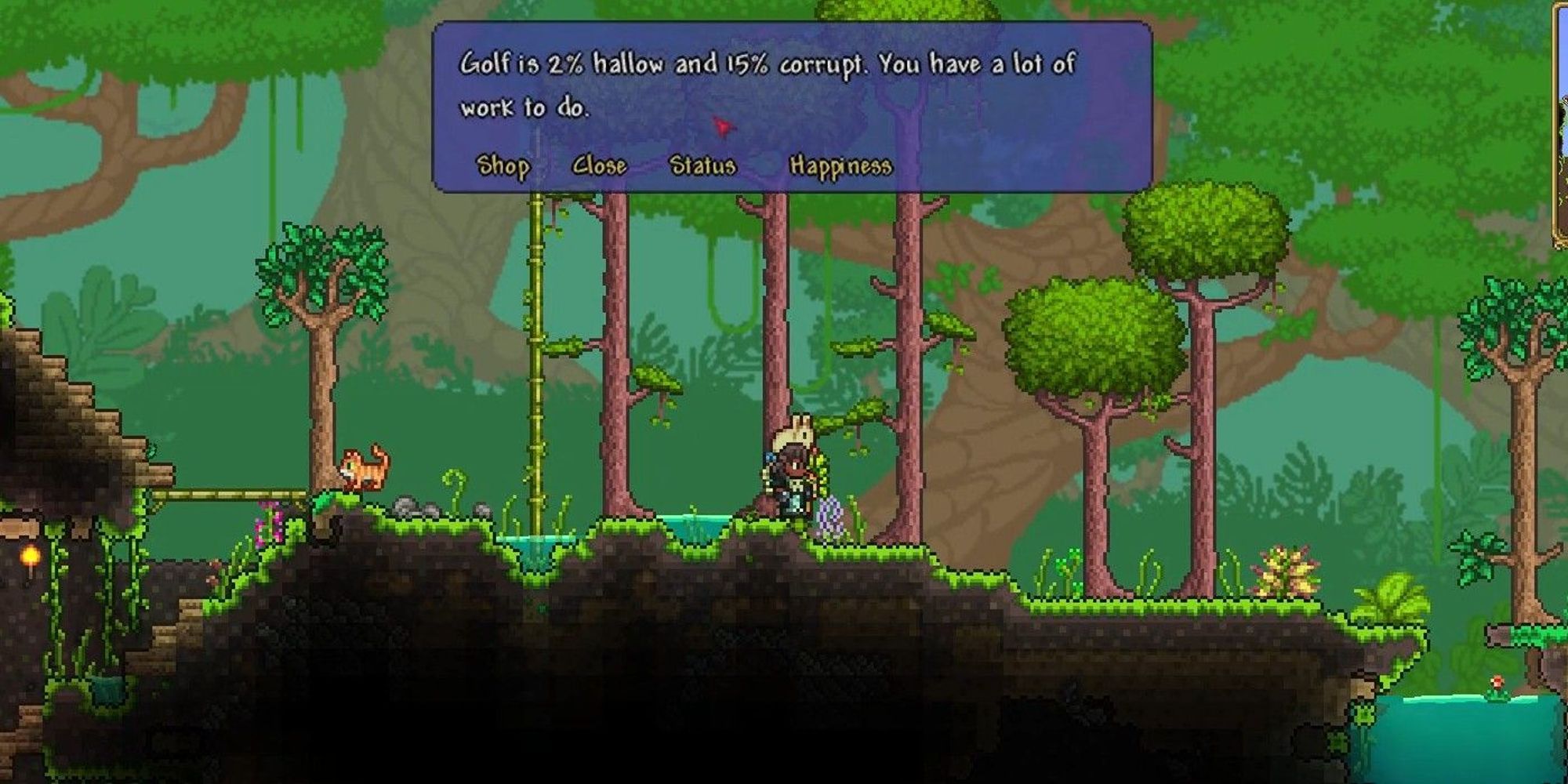 If you don't dig tunnels in preparation for Hardmode, you might realize that your world is quickly becoming overrun with Evil biomes.

As a result, the Jungle biome can very quickly become completely overrun, removing the biome from your world.

If you speak with the Dryad, they will tell you how present the evil biome is in your world. This is helpful if you just have a small bit left that needs to be cleared. 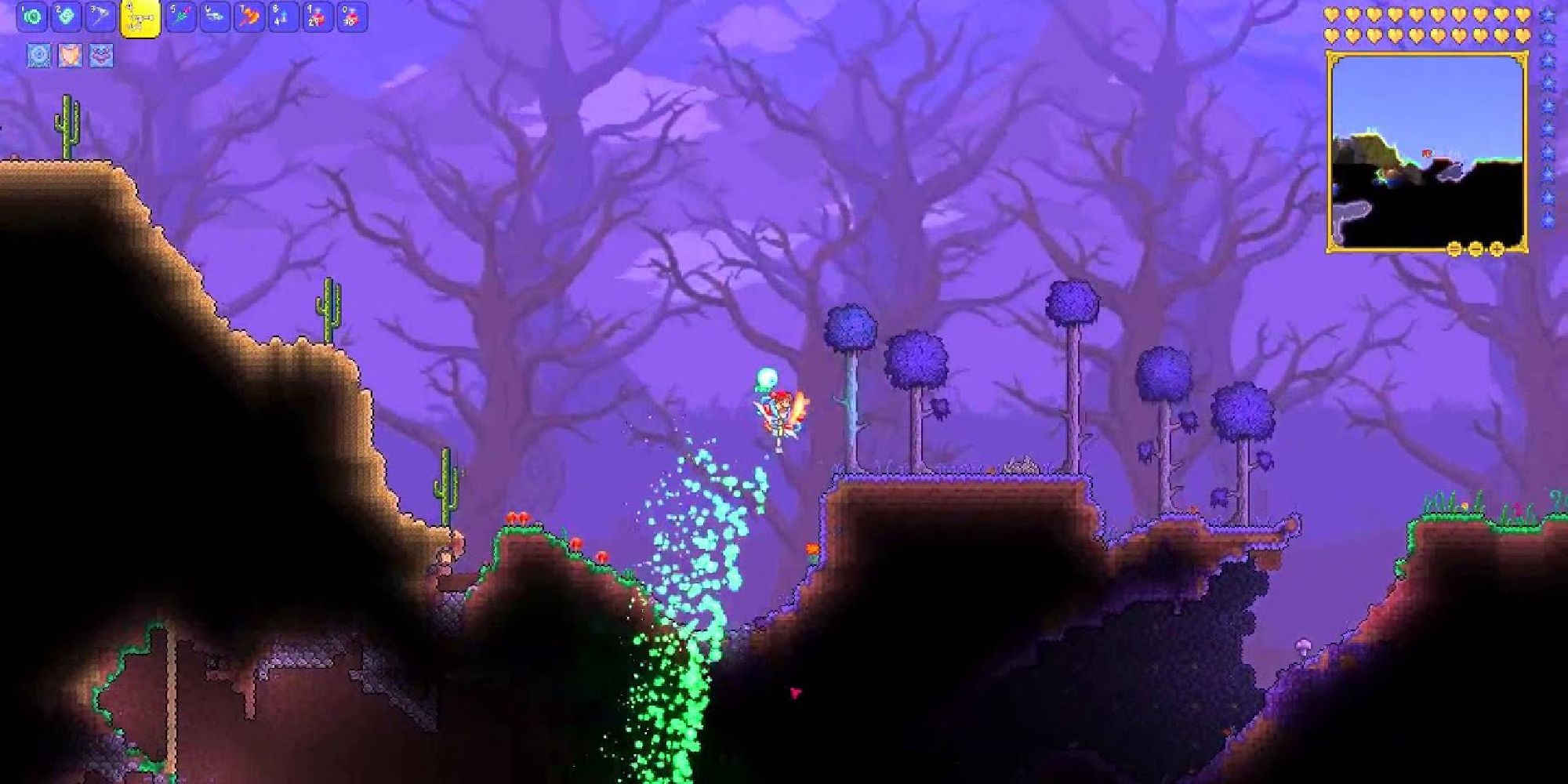 To completely remove Corruption and Crimson from your world, you will need the following:

The Clentanimator is a useful tool sold by the Steampunker in Hardmode, though she has to be living in a Jungle biome home. Come prepared, though, it's one of the most expensive items in the game. This tool can be used to both create and destroy biomes.

Green Solution is the ammo you put inside the Clentanimator. When fired it replaces the Evil biome with whatever tile was underneath originally (referred to as "Purity.") Careful, though, this solution will also transform your Jungle into a Glowing Mushroom biome.

The Clentanimator has a range of 60 tiles and is extremely satisfying to use.

One problem is that it's quite hard to get rid of absolutely all of the Evil biomes. The best way to try and get rid of all of it (and finally satisfy the Dryad) is to dig a series of vertical tunnels and fire the Clentanimator side to side all the way down. This way you should be able to cover a good portion of the affected area.