Final Fantasy has always been known for its beautiful and atmospheric locales. From the slums of Midgar in Final Fantasy 7 to the regal city of Insomnia in Final Fantasy 15, the series is no newcomer to building interesting and eye-catching destinations that players can marvel at.

Stranger Of Paradise: Final Fantasy Origin is no different from the rest. Although a bit darker and edgy in nature, the worlds that Jack and the rest of the protagonist party travel to are filled with incredible attention to detail and fun Easter eggs that any Final Fantasy fan will love to find. 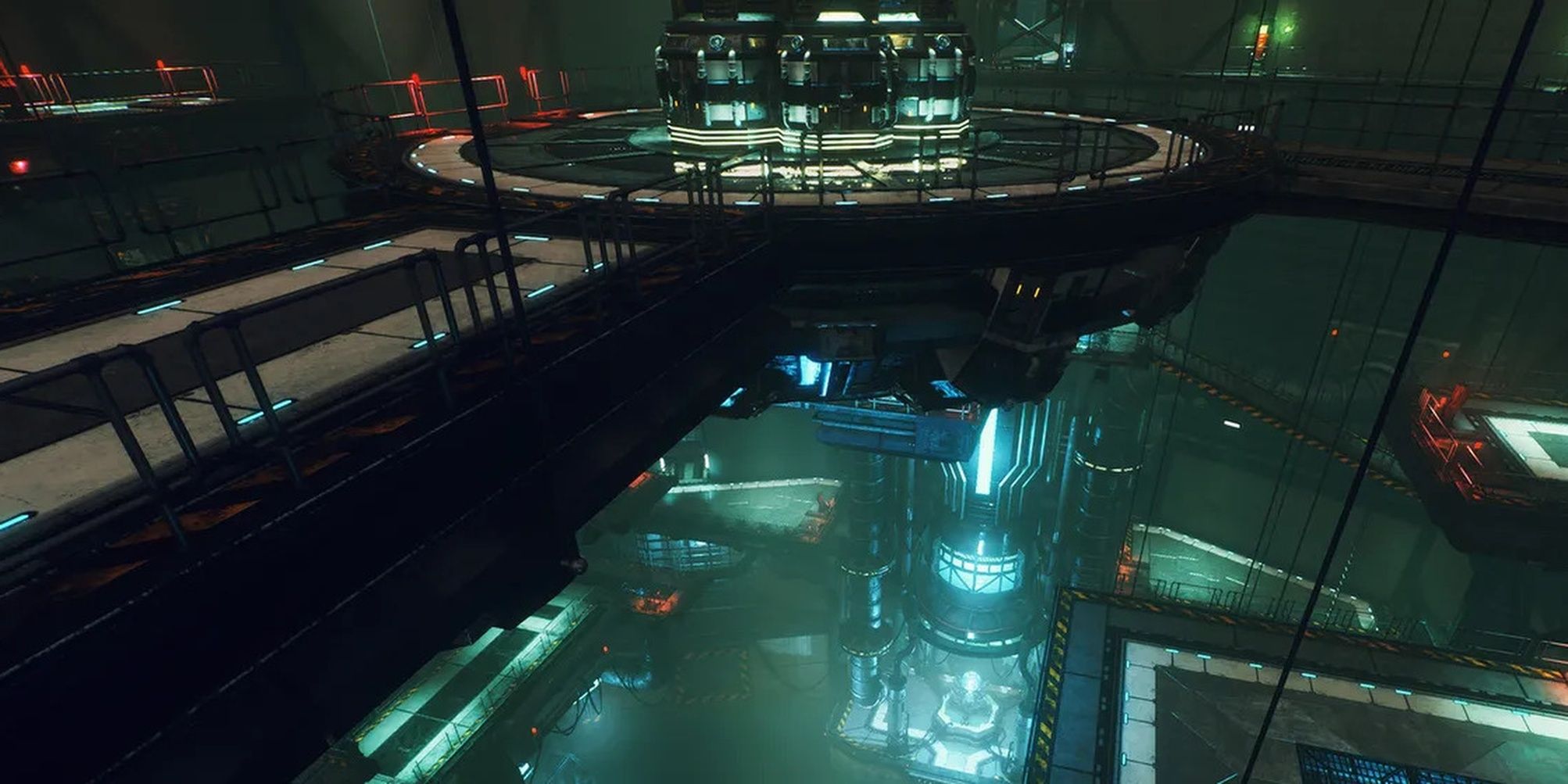 If it isn't broken, don't fix it, that's the motto of the Sunken Shrine. It doesn't bring anything new to Final Fantasy when it comes to level design or aesthetic, but its resemblance to Shinra's Mako reactors from Final Fantasy 7 is the perfect easter egg for any fan of the game.

Most of the worlds in Stranger Of Paradise are built on the hard edge that the game prides itself on. The locales are dark and gritty, even when the source material is not. In the case of Sunken Shrine, it falls perfectly in line with the steampunk-like aesthetic of the slums of Midgar. 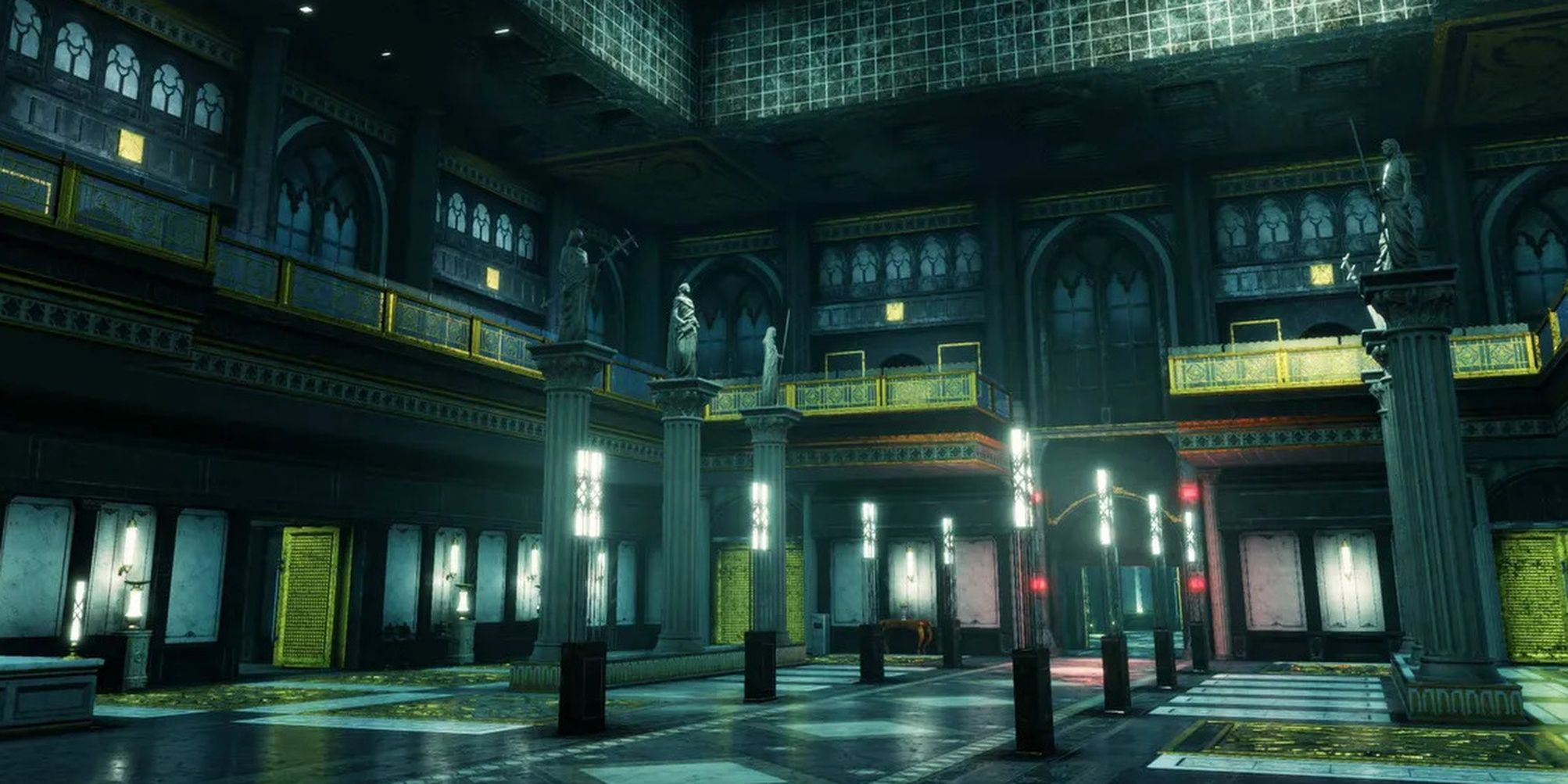 Not all locations the Warriors of Light visit in Stranger Of Paradise are gritty caves and dangerous pits of fire. Vigilia Court is inspired by the regal citadel from Final Fantasy 15.

Walking up and down the halls of the court will remind you of the many hours spent with Ignis, Prompto, and Gladio, on a quest to regain your homeland and take up the throne your father left behind. 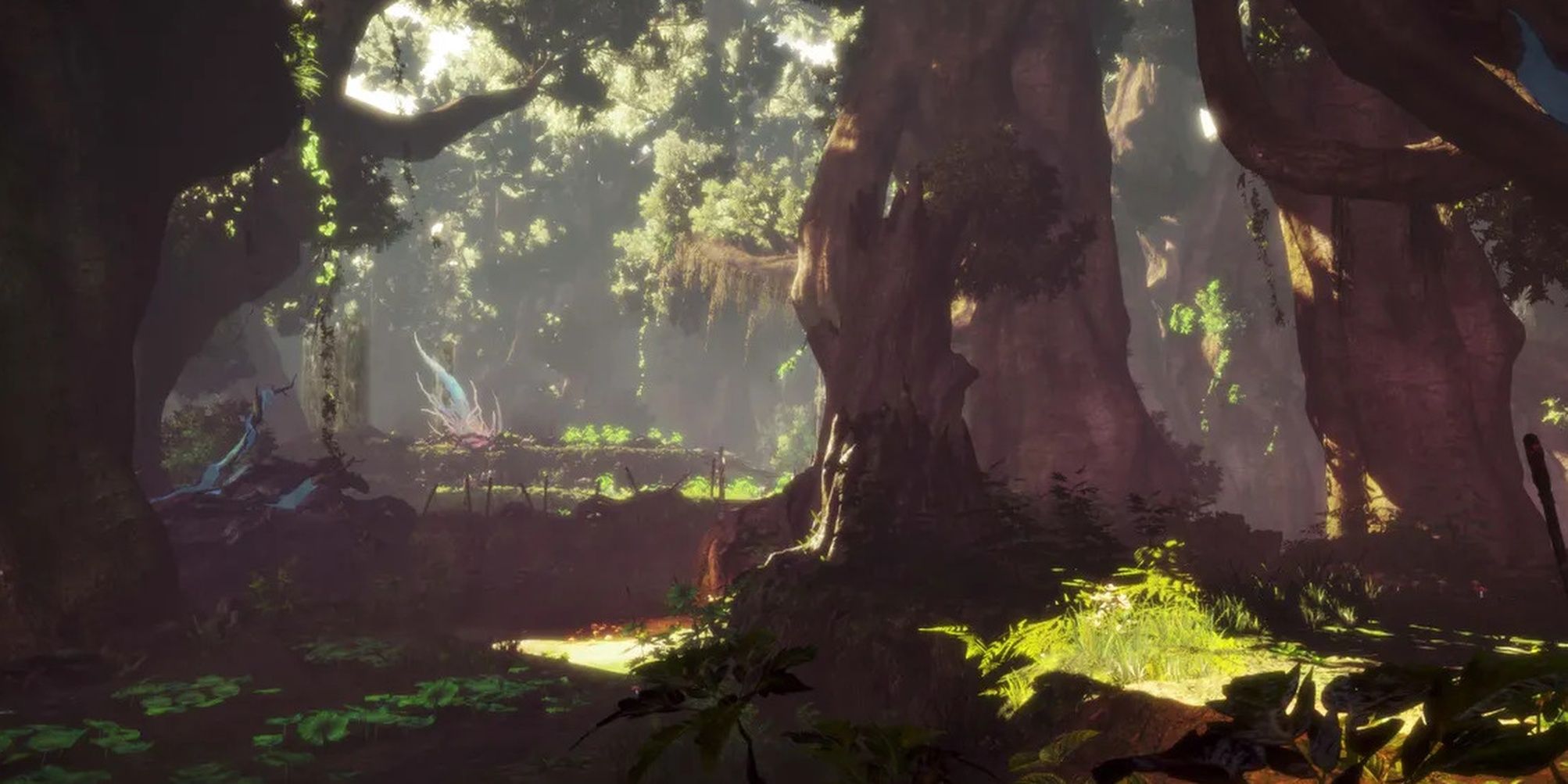 Based on the Sunleth Waterscape from Final Fantasy 13, the Refrin Wetlands is one of the brightest maps in the game. Although a dense and beautiful forest, the daytime sun peeks through the clumps of foliage, giving the Wetlands a majestic and whimsical aura to it.

Crawling with some of the more interesting creatures in the game, the Refrin Wetlands is a nice change of pace when compared to some of the cold and futuristic-styled landscapes. 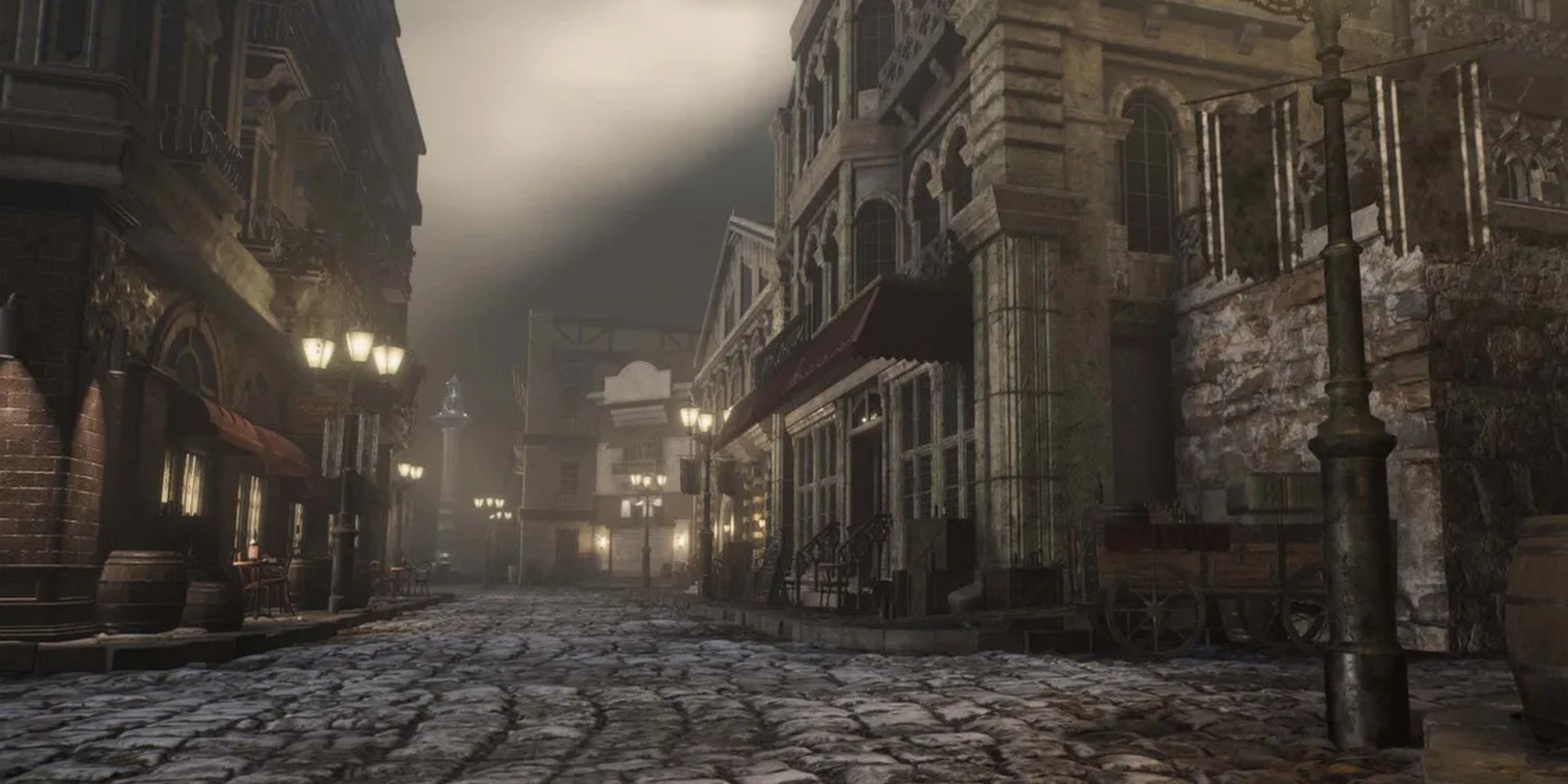 Pravoka is everything that Final Fantasy represents — a small, Victorian-style town with a grimy atmosphere. Although it is not explored as much as other locales, like the Pravoka Seagrot shortly after, the party spends a bit of time here looking for information on Chaos' whereabouts.

Pravoka is one of the few towns you do explore in Stranger Of Paradise, and you could argue that since the game does so well in recreating worlds from older Final Fantasy games, there should be more for the party to wander around in. 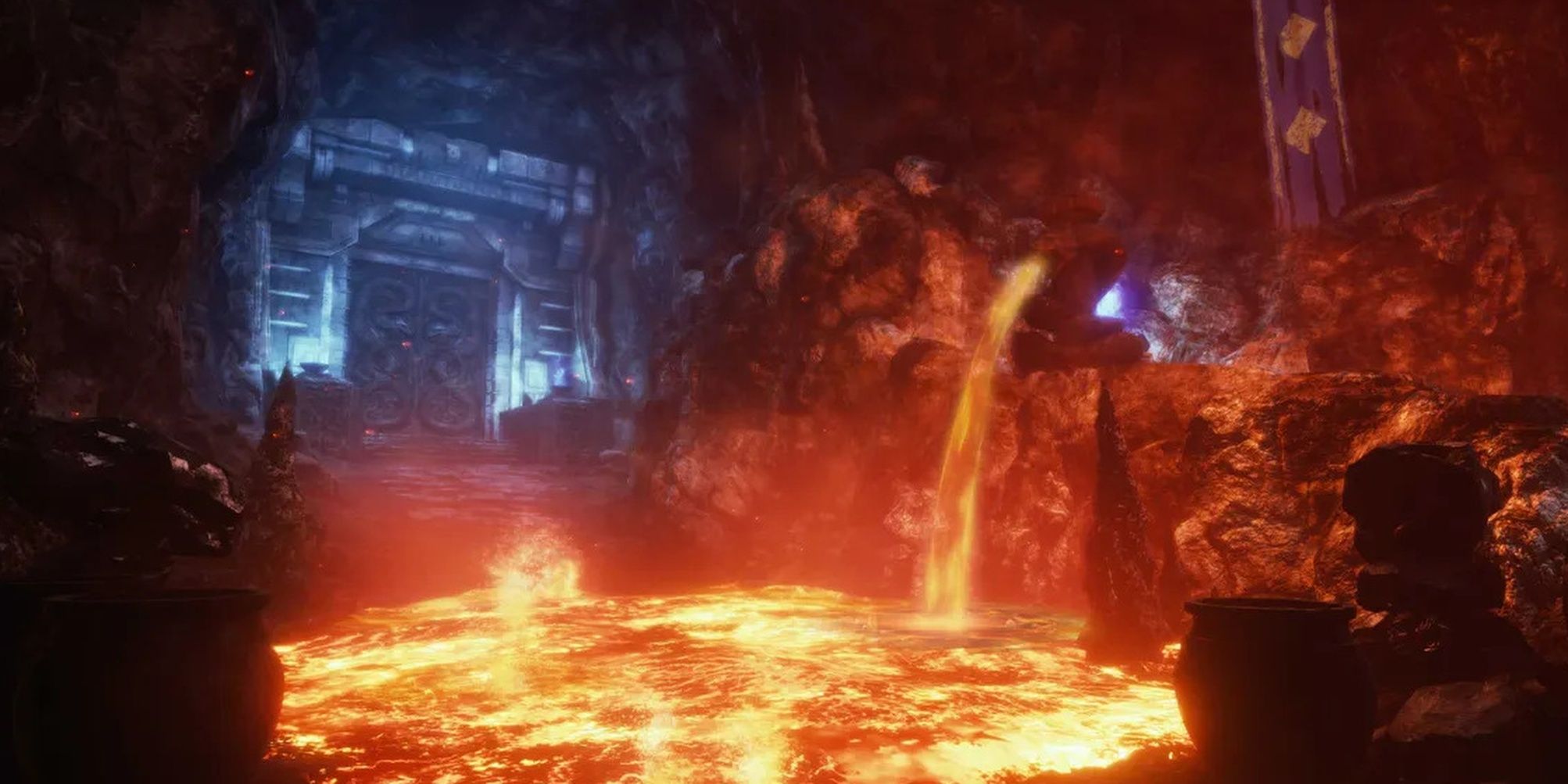 Like every other Final Fantasy game, Stranger Of Paradise needs a hazardous area where no one should ever have to go. Mount Gulg, a location from the original game and borrowing heavily from Final Fantasy 8's Fire Cavern, is a dungeon located inside an active volcano.

The aesthetic of Mount Gulg works extremely well with Stranger Of Paradise's style with its harsh shadows and heavy contrast, making it quite terrifying yet pleasing to the eye. 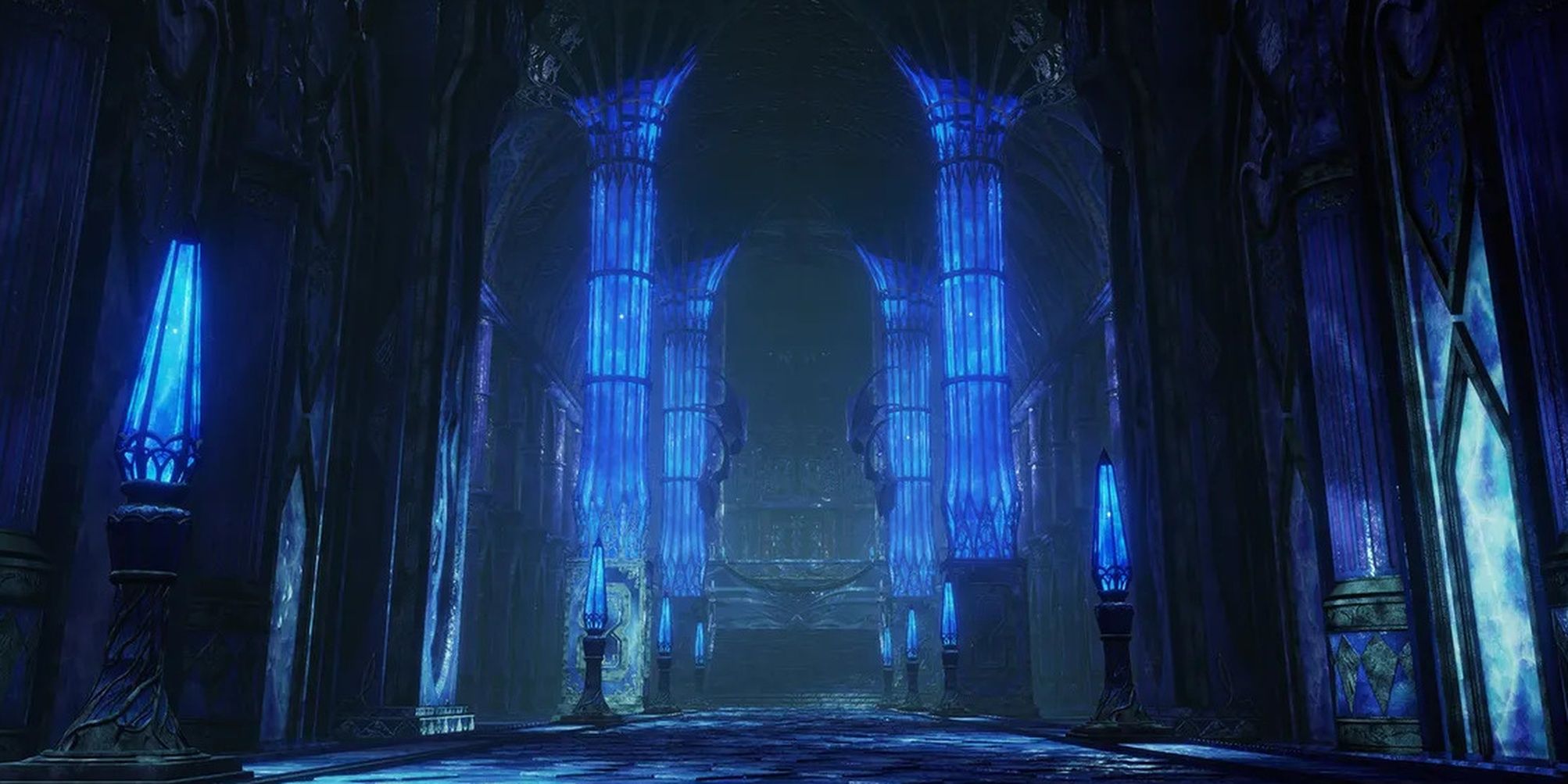 There is something beautiful about how simple the crystal theme is, especially when they are designed with a prismatic blue shimmer that resembles some of the purest water that you'll ever see. 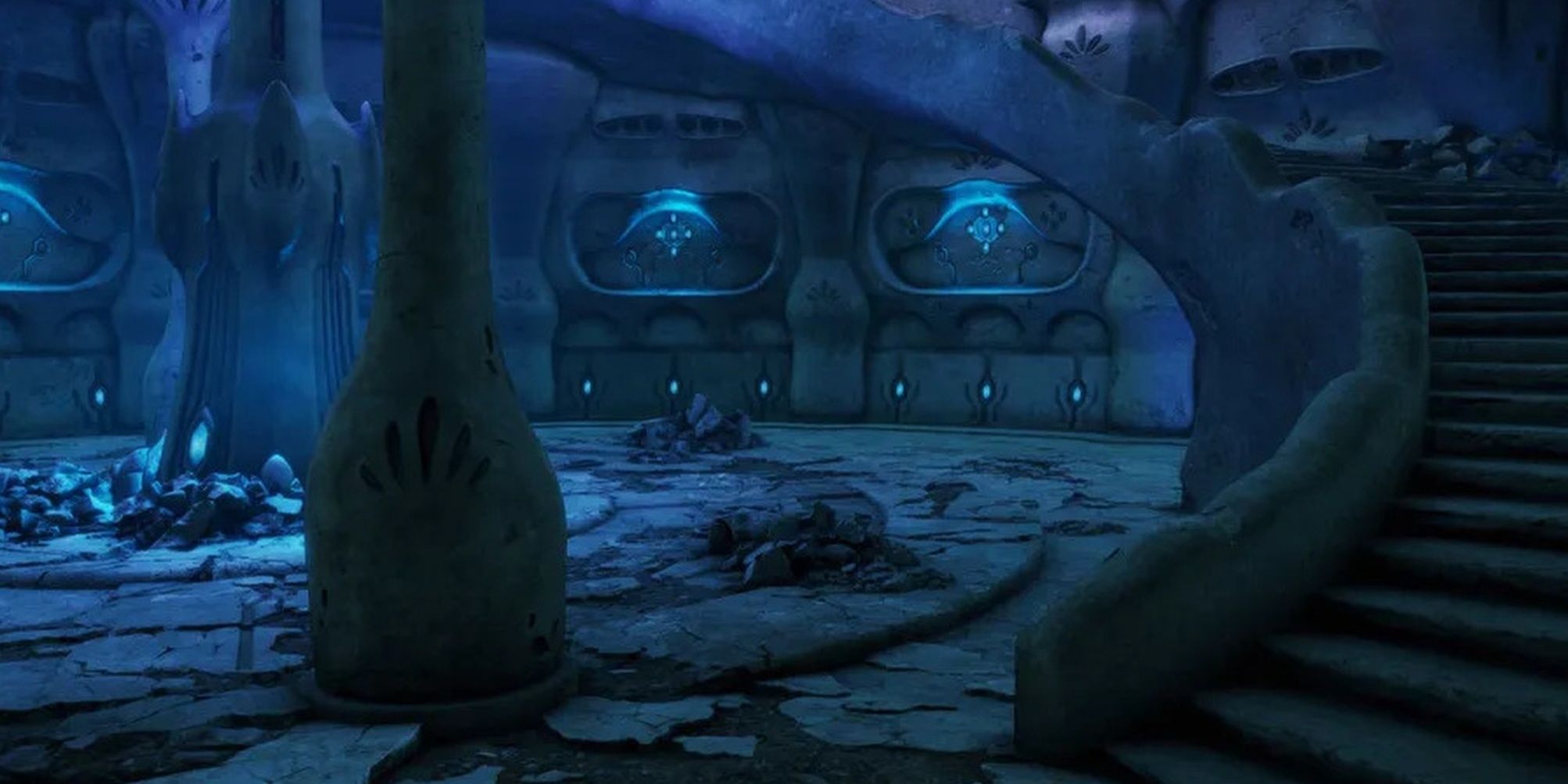 The creepy blue glow of The Ancients' Tower, combined with the catacomb aesthetic of Delkfutt's Tower from Final Fantasy 11, makes this level a visual masterpiece.

The source material for the Ancients' Tower was created during the PlayStation 2 era, so while Delkfutt still looks good to this day, it leaves a bit to be desired by today's standards. The Ancients' Tower fulfills every kid's promise of seeing that gorgeous tower in up to 4K resolution. 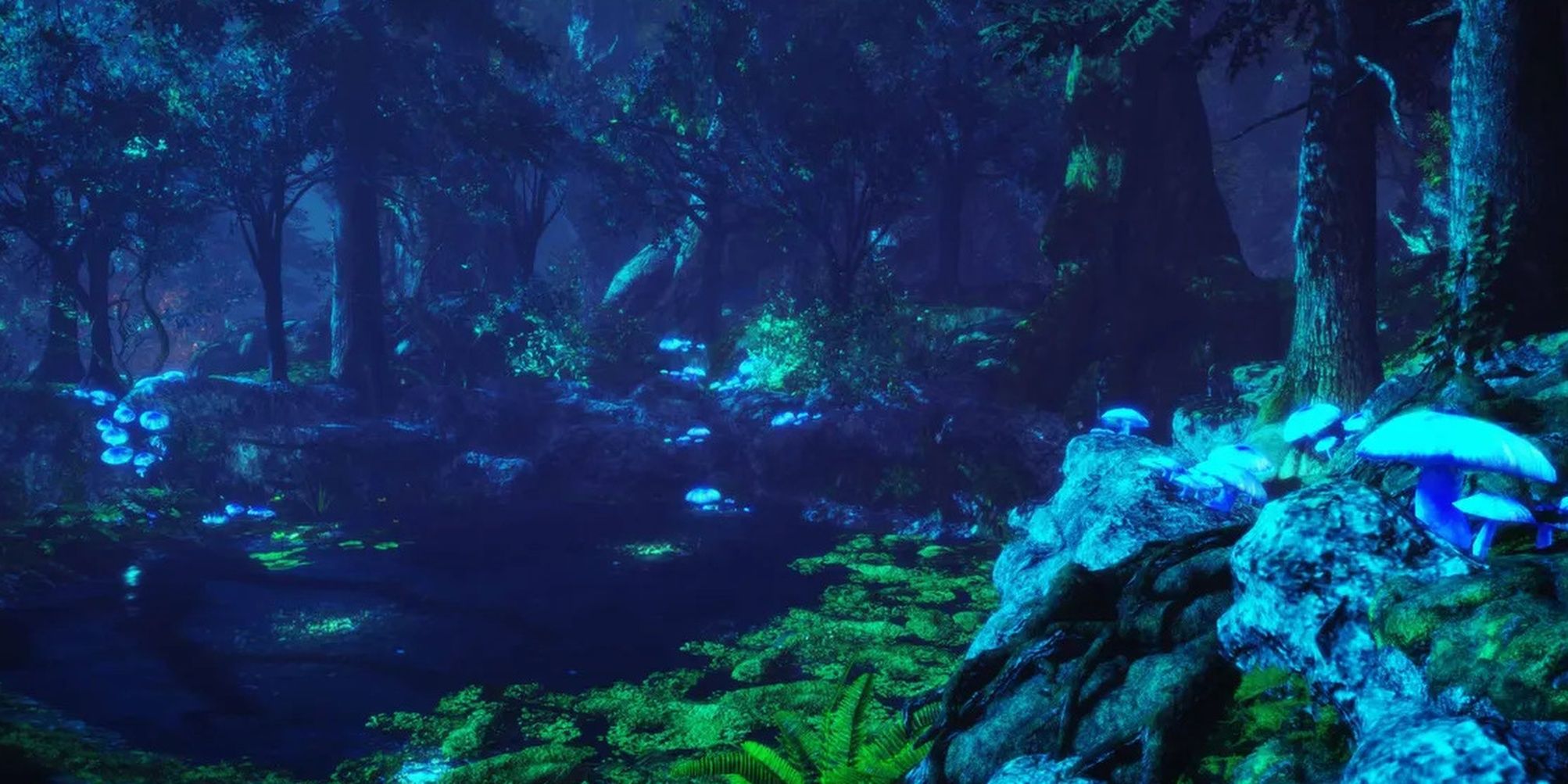 Even though The Wicked Arbor is another forest-style level in Stranger Of Paradise, it is quite different from the Refrin Wetlands. It's rather spooky on one hand, and a bit mystical on the other.

It is no surprise that The Wicked Arbor is based on the Evil Forest from Final Fantasy 9, one of the most whimsical and magical games in the series. A sprawling maze as long as the vines and man-eating plants that inhabit it, The Wicked Arbor is the perfect level for any fan of flora-based levels. 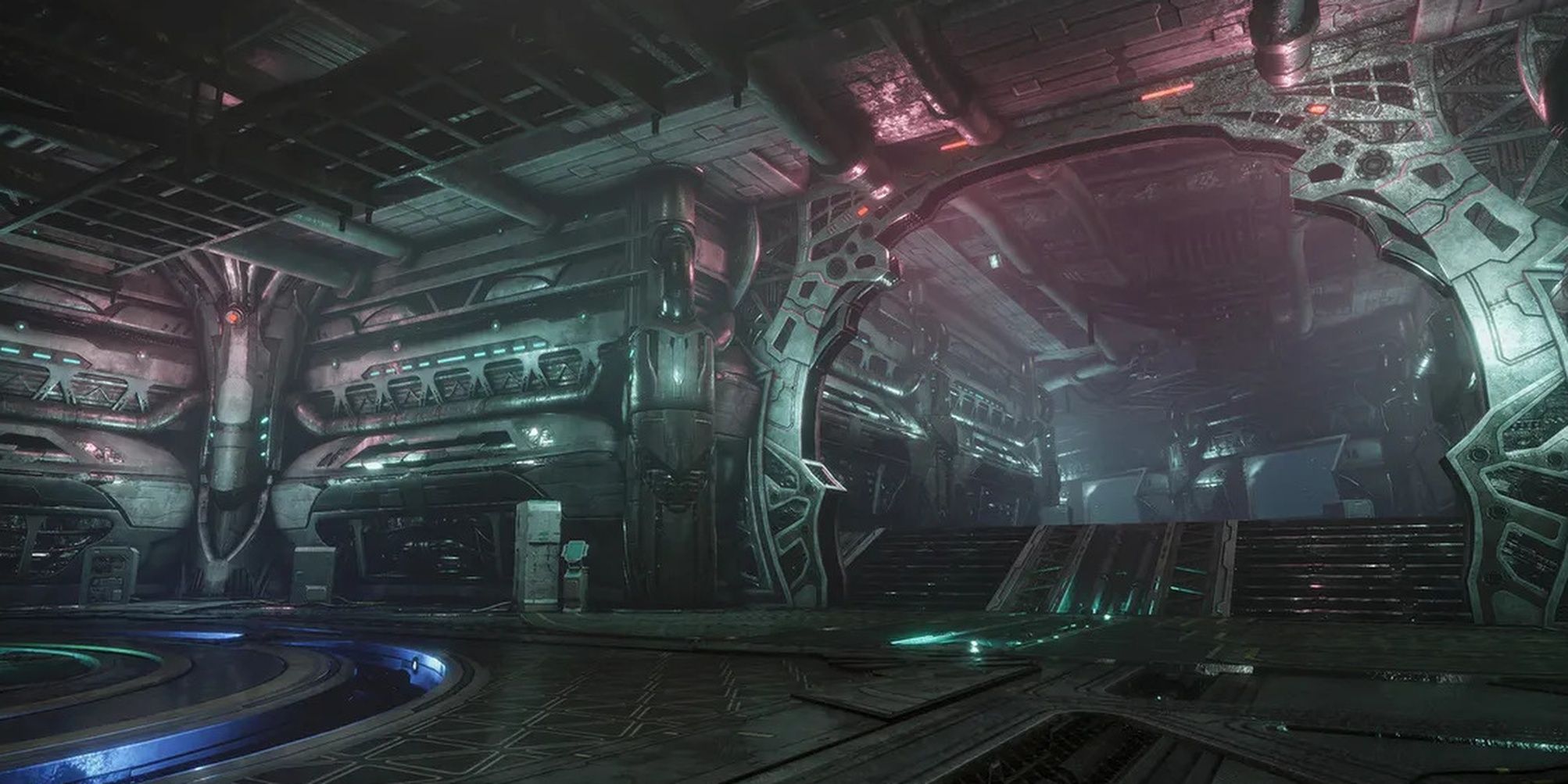 If crystals are the biggest thing related to Final Fantasy, then steampunk fortresses are the second-biggest. The steampunk aesthetic in Final Fantasy is quite unique since the machines aren't powered by steam, but by magic.

This is one of the things that attracted most fans when the series began, and the Flying Fortress, inspired by the Tower of Babil from Final Fantasy 4, is one of the most iconic pieces of steampunk architecture in series history. 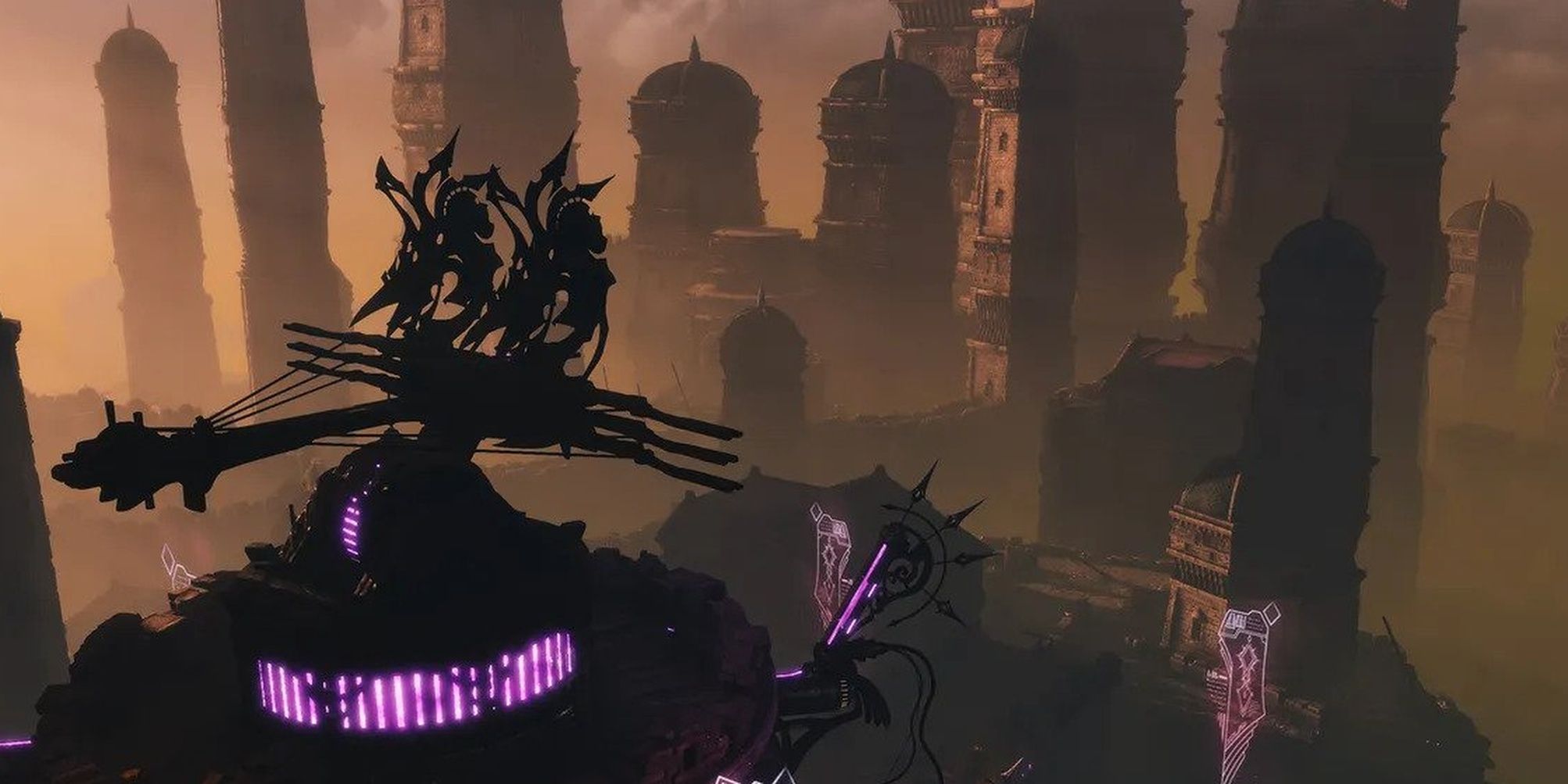 The Western Keep encapsulates everything that Final Fantasy is within one level. Not only are there plenty of old and decrepit castles and towers, harboring terrifying demons and monsters, but the futuristic-inspired ballistae protecting the towers are inspired by Magitek from the likes of Final Fantasy 6.

The Western Keep's versatility — having an area out in the open air, then spiraling dungeon crawling inside the keep itself — make it a perfect level within Stranger Of Paradise.